Fans of “The Barn” are sure to love this impressive, wildly fun sequel, and even newcomers should find this a perfect Halloween horror film.

The sequel picks up three years later from where the original movie left off (watch The Barn for free on Tubi) and features an opening sequence that does not shy away from gory gratuity.

A Scouts troop gathers around a campfire to swap local ghost stories, and the Scouts leader divulges a terrifying tale that cleverly outlines the events of the original movie and serves as a refresher for returning franchise fans.

We spend five minutes listening to the campfire lore before utter carnage ensues, and we are again thrust into a candy-colored nightmare — full of gore, scantily clad women, and the cream of Horror cameos.

Our Final Girl Michelle (Lexi Dripps) is the sole survivor of the horrific events which culminated on Halloween night, 1989.

Now attending college, Michelle and her Sorority sisters of Gamma Tau Psi are tasked with overseeing the creation of their local haunted attraction now that the imposed ban on Halloween has been lifted from their once-sleepy town.

While scouting for potential Haunt locations, Michelle and Brittany (Kaylee Williams) happen upon a rundown, disused barn. Unbeknownst to them, it transpires that this is the original barn where their loved ones went missing after the events of Halloween 1989.

The Barn II excels in delivering another movie that looks, feels, and sounds like it has zombie-crawled its way straight out of the 80s. 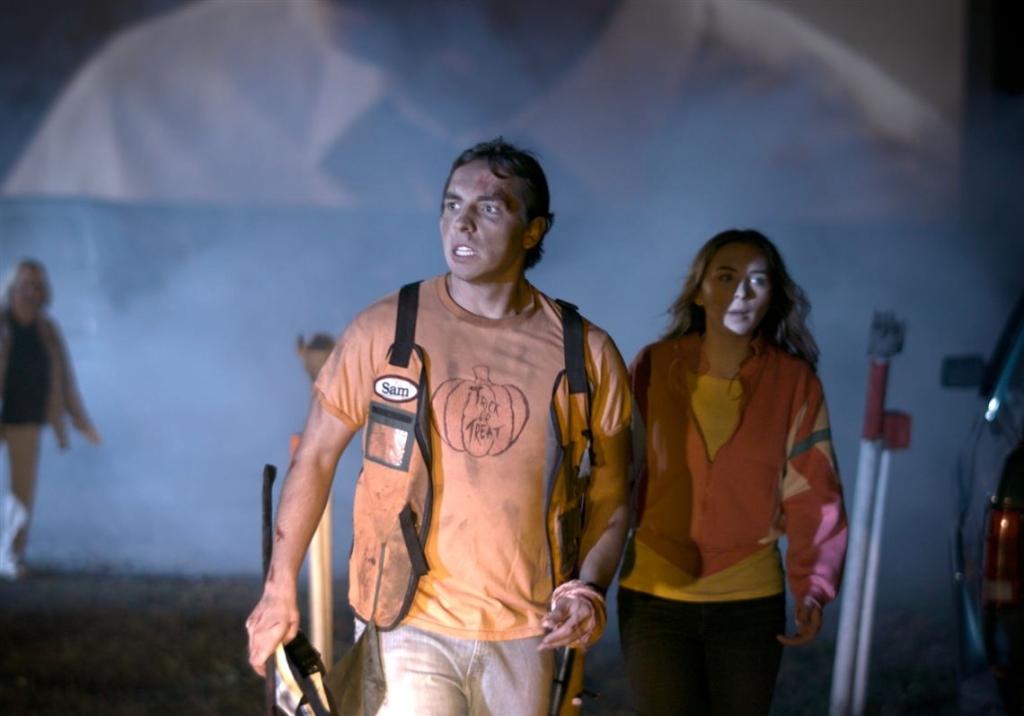 Great care and thought have been put into maintaining this throwback aesthetic; from the garish lighting, the cheap-looking yet authentic trick or treaters’ outfits to the monster mash OST (provided by original contributor Rocky Gray), this movie absolutely succeeds in cosplaying as a beloved 1980’s B-Movie.

The music is incredibly catchy and welcomes a return of Jumpin’ Blues/ Rockabilly outfit The Hucklebucks, who appeared in the original movie at the local dance.

The impressive cast of cameos from Horror’s elite players adds another layer to the authenticity of the sequel.

Doug Bradley guest stars as the town’s Grandfather, an ex-miner with a wealth of local Folklorian tales that further detail the world-building Mythos of The Barn.

Lloyd is a pure caricature, and it is a joy to watch him chewing the scenery, oozing charm, and emanating enthusiasm in bucket loads. 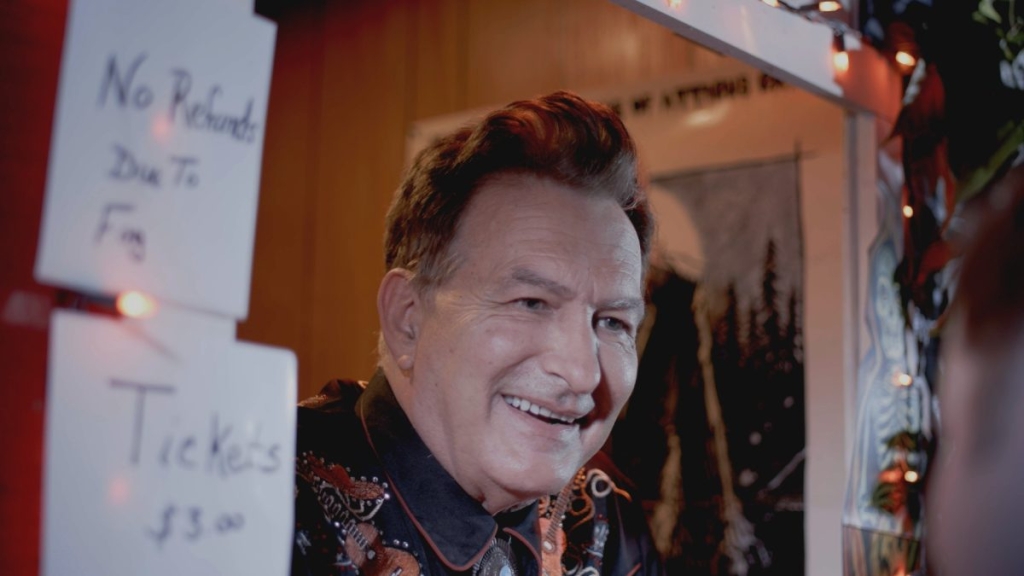 Another returning favorite is the original (child) Jason Voorhees himself, Ari Lehman, who cameos as shock rocker Dr. Rock.

An honorable mention goes to the legendary Mr. Lobo of Cinema Insomnia fame, who appears as himself.

Joe Bob Briggs also pops up as himself, further contributing to the impressive cast.

Horror Veteran Linnea Quigley returns as Mrs. Barnhart, however, this time, she slowly sheds her goody-two-shoes persona in exchange for an Ash Williams makeover, culminating in a bloody chainsaw battle with the town’s Boogeymen.

The original monsters — The Boogeyman, Hollow Jack, and the Candy Corn Scarecrow — return with an upgrade and new sidekicks.

We are introduced to Hell’s new foot soldiers, including a towering, skeletal Crow in a feathered headdress, a squealing killer pig, and a candy corn mutant farmer.

We are treated to impressive metamorphoses of our favorite mutants and a few innocent bystanders along the way.

The practical effects are impressive; from the gory prosthetics to the mask designs, The Barn II is sure to satiate the bloodlust of any Gore Hound. 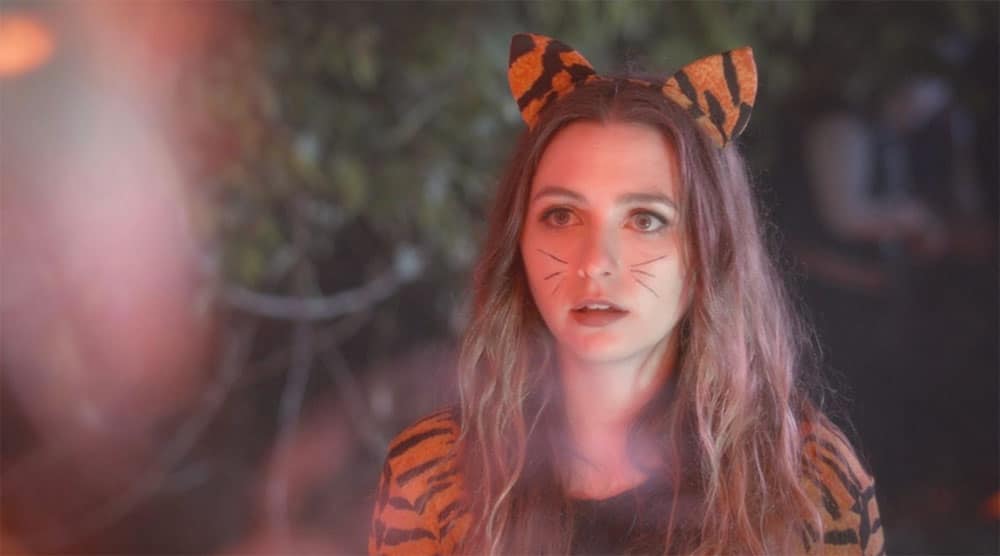 Keen-eyed Horror fans are treated to easter eggs that reference everything from Ghoulies II to Hellraiser and The Evil Dead.

I revisited The Barn in preparation for the sequel, and I was impressed by how easily The Barn II transitions from the events of its predecessor.

I had a blast watching this movie. The pacing flows even better than the original, and with a running time of ninety minutes, it will leave you with a bloodthirst for more.

It is evident that Justin M. Seaman is a director to keep an eye on; a skilled editor, screenwriter, director, and producer who perfectly understands what Horror fans want.

And he gives it to us.

Seaman’s world-building instantly transports us to Halloweens of yesteryear; a decade spent in roller rinks, video stores, and DIY Haunts during crisp autumnal days where the nights give way to the promise of bonfires, candy, and mayhem.

The Barn II may utilize every Horror trick in the book. Still, its treats lie within the solid storytelling, authentic aesthetics, sexy girls, and likable actors who breathe new life into an old genre.

If you are hunting for the perfect movie accompaniment to 2022’s Halloween season, be sure to answer when The Barn II comes a-knocking. Just be careful of which door you knock upon when you shout ‘’Trick or treat!’’

WRITTEN BY Tromance Reviews & Dissections. Neurodivergent Reviewer of Genre Film. Analysis and dissection of Horror movies, as seen through the lens of the Female Gaze.