Christmas, which is now arguably more of a cultural celebration than a religious holiday, is traditionally a time of joy. However, there are creatures and characters who have emerged throughout the centuries that lend a darker edge to this holly jolly holiday. All of these characters originated in Europe when it was a deeply Christian continent, even though some of them were taken from pagan belief systems. 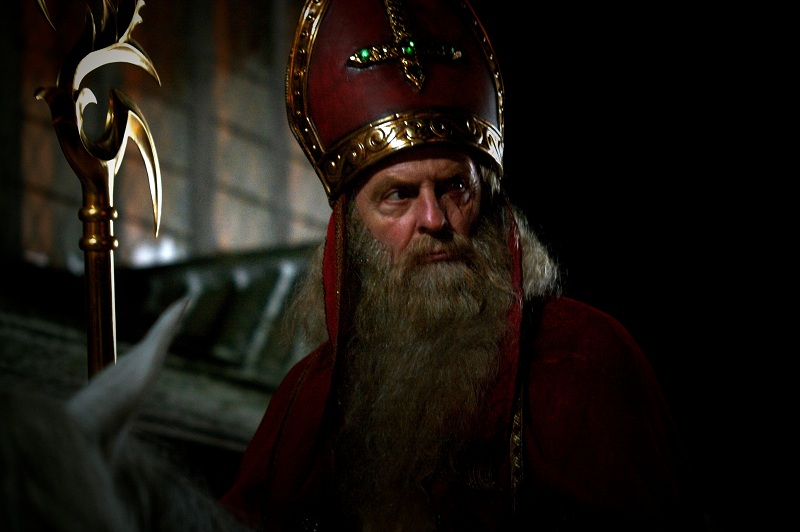 You might be wondering why this list of creepy lore begins with possibly the friendliest, most benign sign of Christmas, a man who is generally beloved by children for bringing gifts once a year. St. Nicholas, a real person, was the origin for Santa Claus and all of his previous iterations. The feast day for St. Nicholas was December 6, which was then moved to December 25 by a pope who hoped to christianize the pagan celebrations happening that time of year.

When more European countries started to convert to Protestantism, the popularity of St. Nicholas fell, but Holland kept the traditions with their character, Sinterklaas. This Dutch character punishes bad children around Christmas time by beating them with a single switch or a bunch of sticks. He is accompanied by the now-controversial Zwarte Piet, which translates to Black Peter. Zwarte Piet acts as a companion to Sinterklaas, hiding and listening to figure out which children are good and which are bad; however, his character is considered racist and offensive by many, and the continuing practice of blackface in terms of the character has led to a lot of discussion and some protesting in both Holland and elsewhere.

Sinterklaas was brought to the U.S. by the Dutch, eventually leading to the character we know as Santa Claus. He may seem jolly, but there are dark undertones to the character. Not only does he watch children as they sleep, but he purposefully waits until everyone is asleep to sneak into their homes once a year. It’s hard to argue that none of that is the least bit creepy. 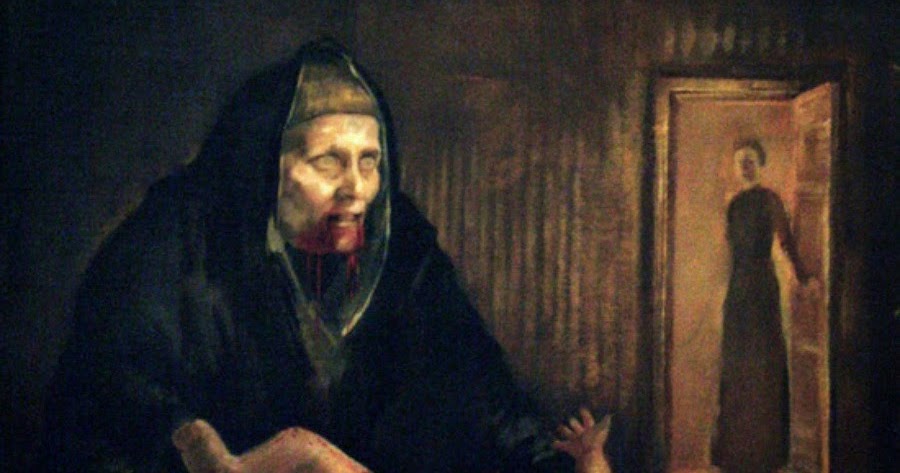 Grýla is a troll or giantess of Icelandic folklore, who lives in the mountains with her third husband Leppalúði. She is said to be able to detect misbehaving children year-round, and she comes down from the mountain whenever she is hungry to hunt for children. They’re her favorite snack, and her favorite meal is a stew made of naughty children.

Grýla and Leppalúði are the parents of the Jólasveinar, or the Yule Lads, of which there are 13. Each one of them visits in the 13 days leading up to Christmas, to leave treats for the good kids and rotten food for the bad kids. Grýla did not become associated with the Christmas tradition until the creation of the Yule Lads in the 17th century and, in the past, they were much more menacing like their mother. Each Yule Lad has a name depicting the actions he takes while he is in town leaving things for the children, which usually have to do with making a lot of noise or stealing things; however, they used to range from simple mischievous pranksters to lads that ate children just like Grýla. The current-day version of the Yule Lads is much more tame and less threatening. 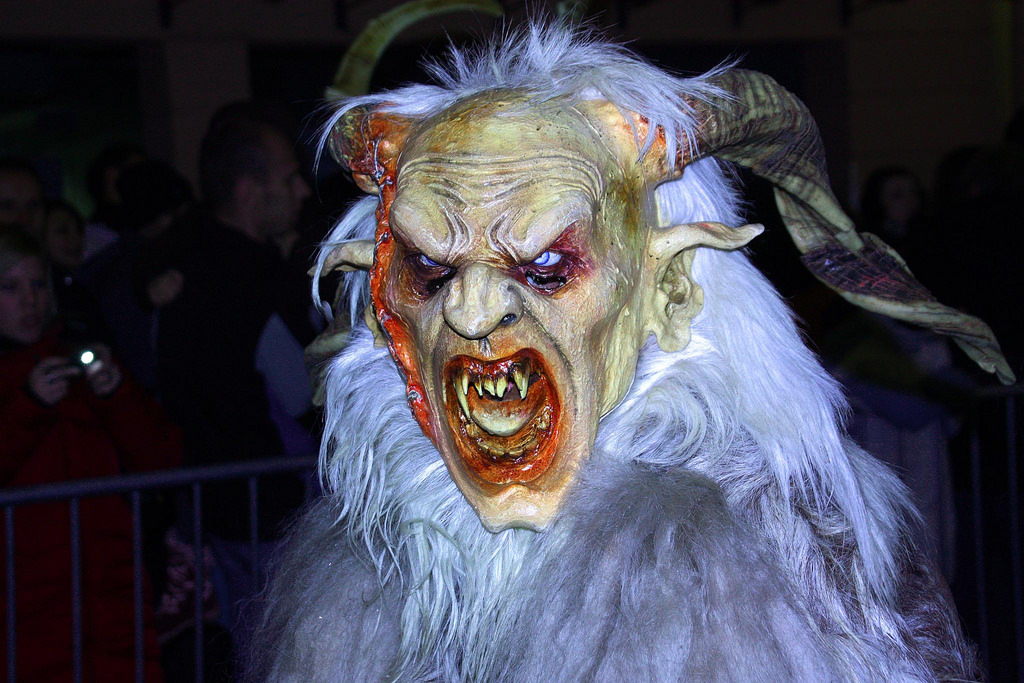 Aside from Santa Claus, Krampus may be the most well-known Christmas legend on this list. He is sometimes known as the Anti-Santa or the Christmas Devil – the latter nickname is part of the reason both Catholic and Protestant churches tried to ban him in the past. Krampus originated in Germany and Austria with a name coming from the German “krampen,” which means claw. He may have been pulled from paganism, as many believe he is the son of Hel, the Norse god of the Underworld.

The Krampus is a half-goat, half-demon who carries chains and bells as he walks the streets. The night of December 5 is Krampusnacht, when he comes out to punish all of the bad children by beating them with switches or kidnapping them to eventually torture and eat them. December 6, as previously mentioned, is Nikolaustag or St. Nicholas Day, so there is a yin-yang component to Krampus and Santa Claus.

Krampus has become more popular recently, with Krampus Parades/Krampus Runs happening in Austria, but also spreading to Slovenia, Hungary, the Czech Republic and even the United States. The character has also been featured in several films, including 2015’s Krampus and A Christmas Horror Story. 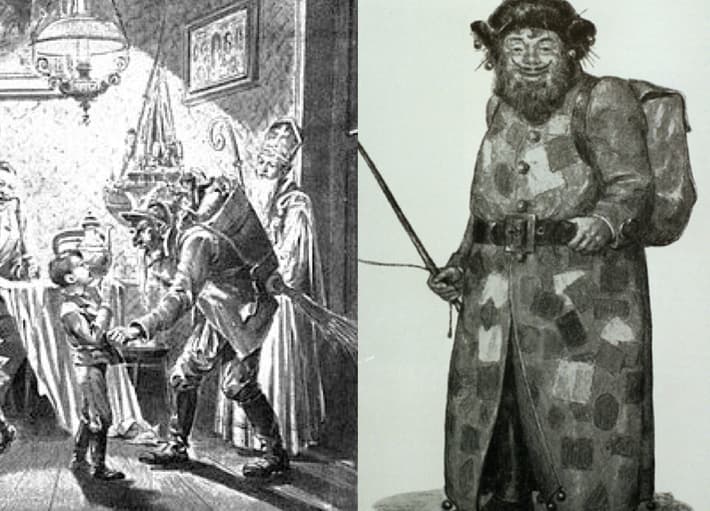 One of the less-threatening characters on the list, while still being threatening, Belsnickel is a legend coming from Germany as well. His name comes from “pelzen” or “belzen,” meaning wallop, and the short version Nickel for Nikolaus. Belsnickel wears tattered clothing, lots of furs and sometimes even a scary mask with a long tongue to appear more frightening. He is often known as a sort of assistant to Santa who visits one or two weeks before Christmas to check on children and make sure they’re behaving. He has also been associated with Krampus, who he might help find children who are acting badly. Belsnickel carries a bundle of sticks to beat the naughty children with so that they shape up by the time Santa visits.

Although he was just a part of the lore in certain regions of Germany, Belsnickel was brought to the U.S. by German immigrants and is still a part of the culture for the Pennsylvania Dutch and parts of Indiana. In Pennsylvania, they even have a few seasonal beers named after the character! And probably the number one reason that people around the U.S. know of Belsnickel is due to Dwight Schrute dressing up as him in the Pennsylvania-based sitcom The Office.

So as you sit around the fire this winter, excited to eat sweets and open presents, don’t forget what could be waiting for you in the dark.