Brutal murders, tons of blood, and practical effects highlight this superb J-Horror, which draws comparisons to some heavy hitters. A TV reporter is sent a snuff film and brings her crew to the location where it was filmed to investigate. Spoiler Alert: they get killed! Let’s dig into EVIL DEAD TRAP, directed by Toshiharu Ikeda.

Everything you read about this film compares it to Giallo, broadly, and Argento, more specifically. I can see why the comparisons are made; I just disagree with them. There is much more of a Cronenberg vibe here for me.

The gruesome kill scenes remind me more of the golden age of A Nightmare on Elm Street and Friday the 13th as they traded blows by coming up with more inventive and ludicrous ways to murder teens. The difference here is how harshly these kills play out. The impaling scene screams Hellraiser to me.

The sets are fantastic and even seem like precursors to set design in films like Saw or even the Escape Room films. 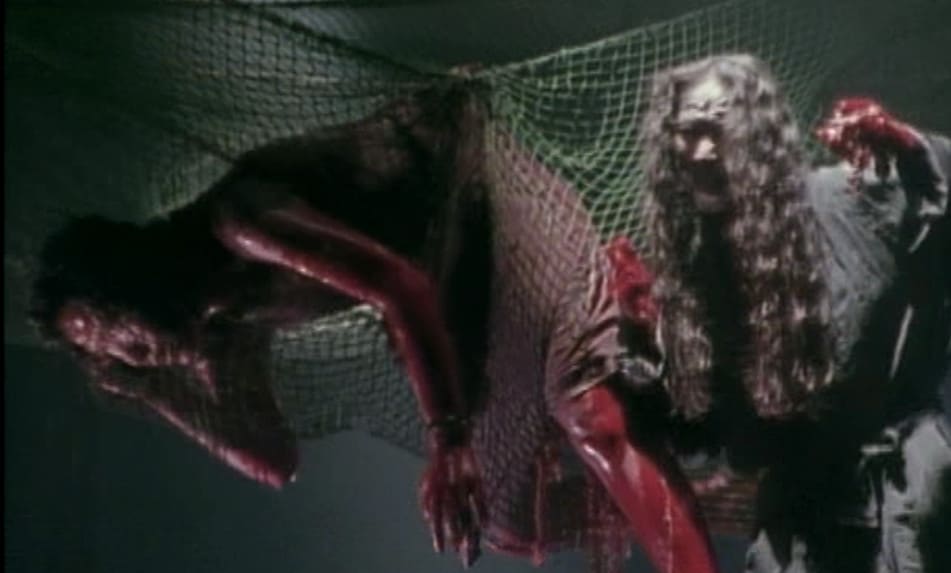 There is even a little ode to Raimi at the beginning with the floating entity board cam.

Obviously, they used the name Evil Dead to ride the financial success of that indie franchise. I’m not mad at them. They backed it up.

There were a couple of sex scenes, and they felt very different. They felt… porny. There wasn’t the normal attempt at the fake passion that comes with the genre.

The score will not leave my brain for a long time. The theme is repetitive in the same way the Silver Shamrock song is, and I love it.

If you don’t think Malignant steals the twist of this film in any way, I’ve got an original idea about a shark tormenting a beach town on the fourth of July to sell you.

Unearthed Films put out a Blu-Ray with some new artwork that I can’t place the artist on. It could be Sadist Art or Justin Osbourn, or someone completely out of the left field. You can stream it on Amazon Prime, AMC+, Shudder, Fandor, Screambox, Night Flight, Arrow, Plex, and Flix Fling.