A tumultuous production, confusing scenes, recasting, and early change in director duties does not make this eighties holdover any less fun. 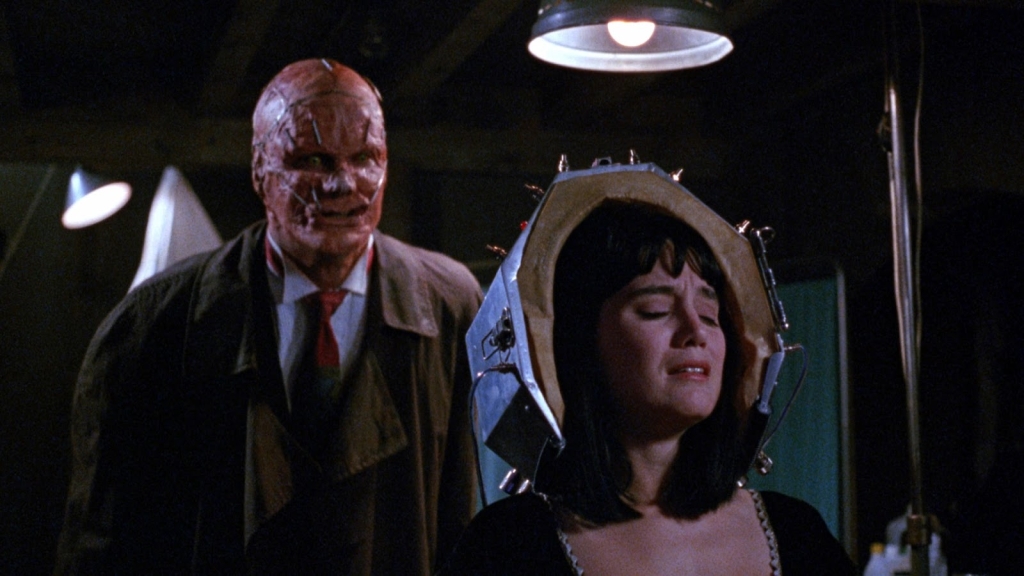 A Horrorthon is interrupted by a vengeful, face-swapping killer. Let’s dig into 1991’s POPCORN, directed by Mark Herrier and Alan Ormsby.

Shot in Jamaica, this Bob Clark (Black Christmas, A Christmas Story) produced teen horror has tons to enjoy. I would flat-out call it a really fun movie.

That said, there are a bunch of things that leave you scratching your head — like the dream sequences that play like a horror version of Labyrinth. Hell, the main character is even named Sarah (sort of), and she walks around calling out for Toby!

There really doesn’t have to be any supernatural element to make this a good story, and it does nothing in the way of making it cohesive. Give me more scenes in the theater with all the masks and reggae.

Maybe all this extra fat was gathered due to firing both the original director and lead actor weeks into filming. The movies within the movie are great and reminded me of Matinee, which makes sense since they are both based on the brilliance of William Castle.

Featuring the nineteen fifties era, sci-fi horror adds an endearing quality to the film. There is so much more that could have been done with those scenes rather than breaking for some nonsense that hinted at an otherworldly element to the slasher threat.

The big bad killer, we’ll call him lunch meat face for spoiler-free purposes, was pretty great, too. Just like with Freddy, I love my killers packed deep in the pocket with puns and dad jokes.

There’s not much bad here that can’t be excused by all the fun, meta-eighties style they were able to bottle up.

Dee Wallace (Maggie/Sarah’s mother, Suzanne) was THE genre mother of the eighties. From Spielberg’s E.T. to Stephen King’s Cujo to Critters, no one played a better mother figure in this era.

Jill Schoelen (Maggie/Sarah) has popped up in a couple of Digs, including The Stepfather and Cutting Class.

Derek Rydall (Mark) also appeared in a recent dig which is available on Shudder, Phantom of the Mall.

Kelly Jo Minter (Cheryl) has a pretty great genre resume. She was in the high school comedy Summer School, which always felt like it catered to the horror kids, played Yvonne in A Nightmare on Elm Street 5 – The Dream Warrior, was Maria in The Lost Boys, which is a personal favorite of so many spooky kids, and played Ruby in the most underrated Wes Craven film in my opinion: The People Under the Stairs. 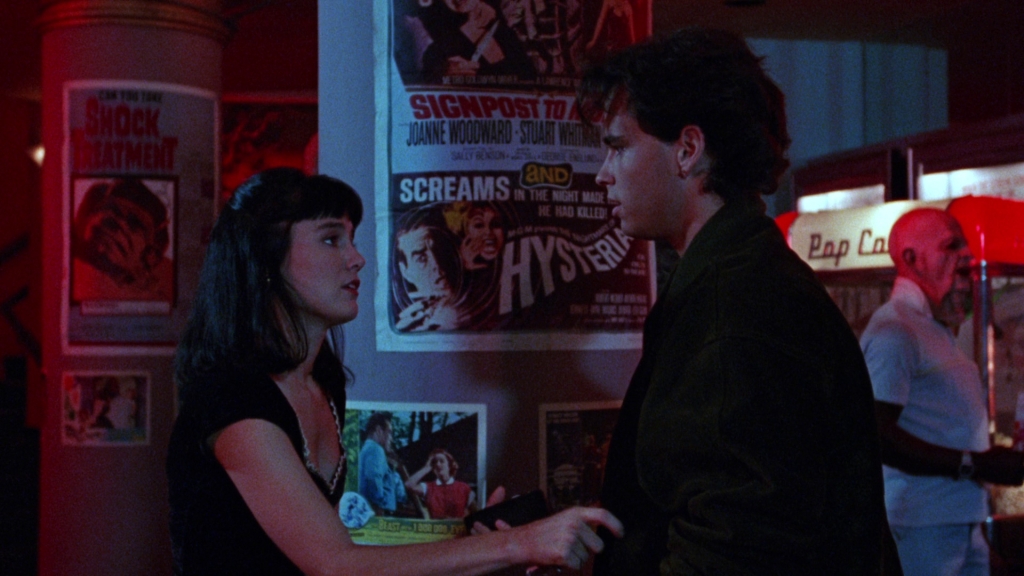 What makes no sense to me is the dream sequences. They don’t fit the film and disrupt the flow. There is a scene where Maggie’s mother goes to the cinema, and the sign attacks her, in a way It feels so out of place that I mistook this for a dream sequence. It wasn’t.

Jill Schoelen doesn’t seem to age. Granted, this film is only a couple of years after she was playing a fifteen or sixteen-year-old in The Stepfather, but she’s still as cute as a button here.

If you can make the whole film as fun as the theater scenes, I’m in. Who in this genre wouldn’t love to base a film around a Horrorthon?

Synapse Films released a Blu-Ray Steelbook that features Justin Osbourn’s art. You can stream it on AMC+ or Shudder.