The type of film that becomes a guilty pleasure, “The Car” features a killer car and was created by Hollywood vehicle legend George Barris.

A small Utah town is tormented by a driver-less, killer car. Let’s dig into 1977’s “The Car”, directed by Elliot Silverstein!

How can a movie about a car be so bad and not be named Fast and Furious? That’s a valid question, but the only way this film escaped that franchise is by predating it by twenty-some-odd years.

The story is ridiculous. The acting is out of place. The threat is never big enough. Yet somehow I enjoyed watching it.

James Brolin is charming, even in a stinker like this. Kathleen Lloyd as Lauren is also really endearing. Fun fact, she played Neve Campbell’s mother in The Craft.

Opening your film with a quote from the father of the Church of Satan and then using “Dies Irae” (which was much more effectively used to open The Shining just a couple of years on) sets a high standard for the dread and horror to follow. A bar that was raised but never even tried to jump over.

The whole film is very standard stuff. Even the crux in the evil car’s maw, not being able to roll onto sacred land, isn’t very creative.

It’s all just enough or too bland to become a cult hit.

The car, being a 1971 Lincoln Continental Mark III, is a far cry from a red Plymouth Fury. Even the setup for a sequel, the threat of the car surviving destruction and menacing the big city, lacked teeth.

James Brolin (Wade), as far as genre films, will be most recognized as the bearded George Lutz in the original film version of The Amityville Horror, and recently he narrated the awesome adaptation of Jeff Lemire’s comic book Sweet Tooth on Netflix.

Kyle Richards and her sister Kim play Wade’s daughters and before they became reality famous in the Real Housewives, Kyle played little Lindsey in John Carpenter’s Halloween and reprises the role in the recent sequels.

The titular car was created by none other than Hollywood vehicle modifier George Barris, who created such iconic wheels as the Munster’s Koach, Batman 66 Batmobile, and a slew of others.

The sepia tone of the car’s POV maybe? I’m grasping at straws here.

Josh Brolin isn’t the first generation in his family to have an abundance of striking masculine appeal. His father looked every bit the leading man and has the talent to boot. 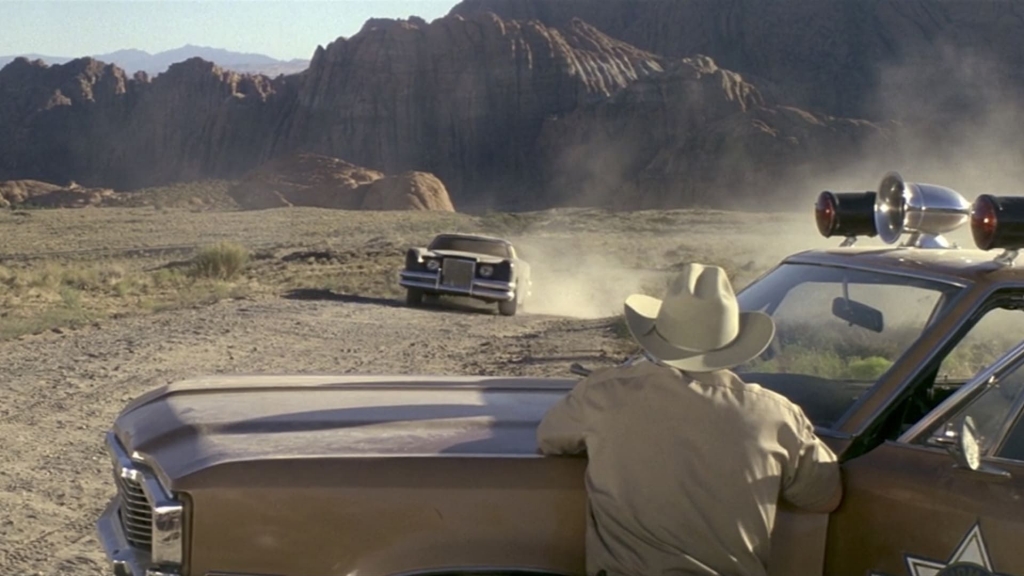 I’m not sure I’ve seen a good killer car movie since Maximum Overdrive — and even calling that one good is suspect. Maybe it’s time for a quality effort, or maybe it’s just too far out there of a concept for horror fiends to ingest at this point. Michael Bay may have made sentient cars too ridiculous.

You don’t hear this often, but an unofficial sequel was produced in 2019 titled The Car – Road to Revenge and is set in some cyberpunk post-apocalyptic world where the car is a bit of an anti-hero.

UK-based Arrow Films put out a Blu-Ray with a making-of documentary, or if you’re stateside you can buy from Shout Factory who produced some new interviews for their Blu-Ray release. You can also rent to stream on Apple TV, Amazon, Google Play, YouTube, and Vudu.