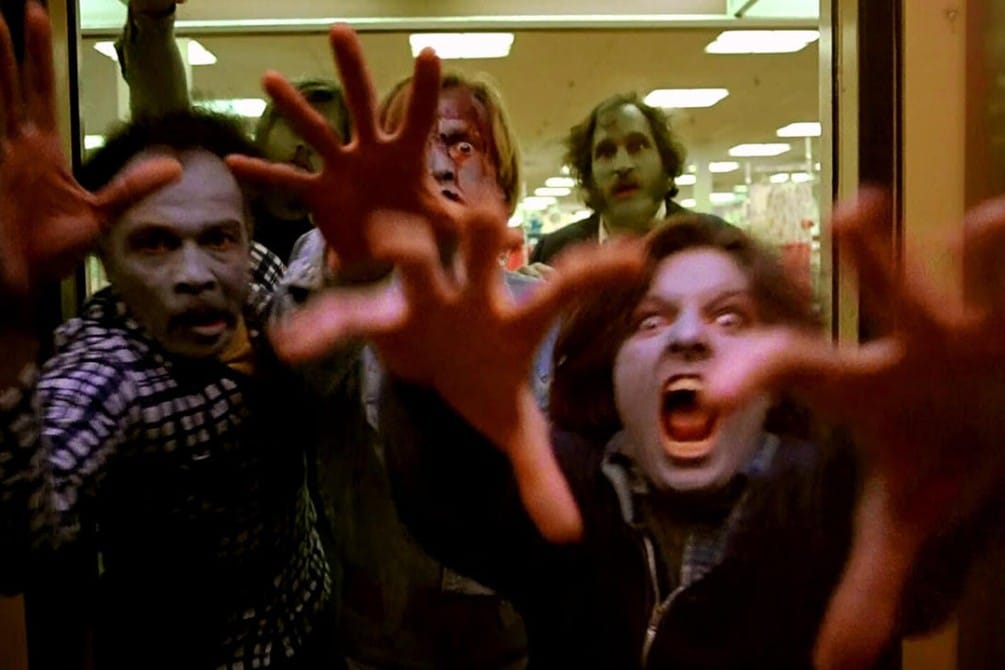 Way back when DVDs first started to transition over to a new form of physical media called “Blu-ray,” one of the more surprising titles sitting casually on store shelves was George A. Romero’s 1978 zombie epic, Dawn of the Dead.

While a curious sight, it wasn’t completely hard to believe given that Anchor Bay had recently released a 4-disc DVD set packed with three cuts of the film, a bonus disc crammed with extras, a comic book, and some wickedly cool black-and-red packaging that still looks fantastic on a movie shelf today.

It was a must-have for Romero fans, but the arrival of the film on Blu-ray didn’t quite register as highly due to the simple fact that physical media collectors hadn’t yet made the transition to the fledgling high-definition upgrade.

At the time of Dawn of the Dead’s arrival on Blu-ray, the zombie genre was enjoying its triumphant return to the forefront of horror.

Critics and fans had swooned over 28 Days Later, Shaun of the Dead, the remake of Dawn, and Romero’s grand return to the subgenre with Land of the Dead. Meanwhile, the stellar sequel to 28 Days Later, 28 Weeks Later, had just arrived in theaters a few months before the release of Dawn ’78 on Blu-ray. Zombies were everywhere, so it made sense that one of the Mack Daddy zombie movies would be widely available for diehards to consume between the latest Hollywood releases.

Fast forward a number of years, and trying to find a physical copy of Dawn of the Dead would be costly. Even weirder was that it had mysteriously vanished from any streaming platform.

For the past several years, Dawn producer Richard P. Rubenstein has essentially been holding Dawn of the Dead hostage from fans (along with Martin, I might add). Shortly before Romero passed away in 2017, Rubenstein had begun work on a 3-D conversion of the film, something Romero supposedly awarded with his blessing.

This has, however, prevented fans from receiving an ultimate edition of the film on Blu-ray or a 4K pressing… at least here in the good old USA.

Don’t think many of these boutique releasing companies haven’t tried, with Scream Factory even directly addressing it a number of years back, saying that it would probably never join their library due to the high dollar demands from Rubenstein.

In Europe, the film has enjoyed multiple releases on Blu-ray, all to varying degrees of quality, perhaps the best being Second Sights’ ultimate set released not long ago.

This has forced American fans to shell out for European copies that require region-free players so they can enjoy various features of the disc.

It’s immensely frustrating, but five years after the news broke of the 3-D conversion, Dawn fans are finally being rewarded for their patience with the ultimate Halloween treat. 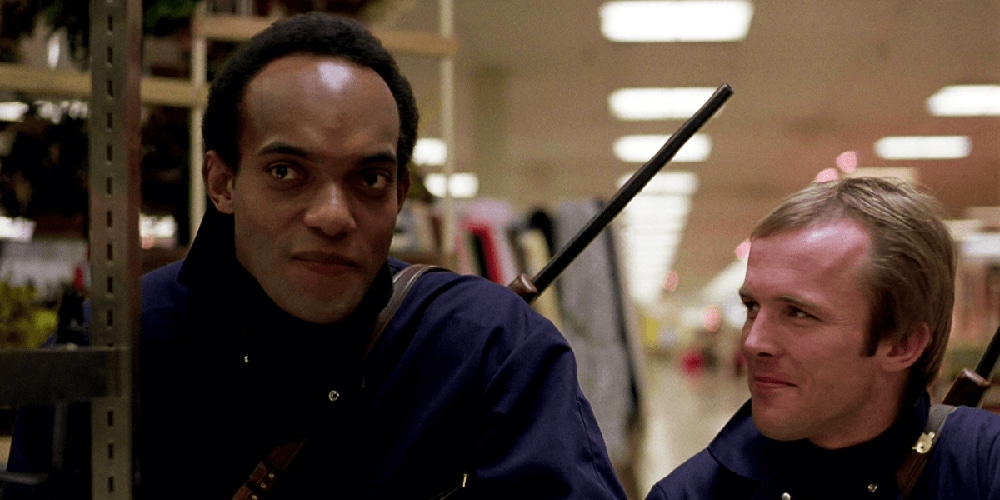 For those unfamiliar with Dawn of the Dead, this sequel to 1968’s Night of the Living Dead picks up several weeks after the first reports of the dead coming back to life and seeking the flesh of the living.

With society on the verge of collapsing, Philadelphia news station producer Fran (played by Gaylen Ross), her helicopter pilot boyfriend, Stephen (played by David Emgee), and two S.W.A.T. team members, Peter (played by Ken Foree) and Roger (played by Scott H. Reiniger), high tail it out of town as the city succumbs to the growing numbers of undead. With very little in the way of options for safe shelter, the group happens upon an indoor shopping mall that appears deserted but is loaded with supplies.

Convinced they have a good thing going, the group begins reinforcing the mall to keep the increasing numbers of undead out.

It soon becomes apparent that the situation shows no signs of improving, forcing the group to come to terms with the fact that this shopping center may be their new home. Meanwhile, a roving motorcycle gang has also set its sights on the mall, ready to take it by any means necessary.

At the time of Dawn of the Dead’s release, the zombie subgenre was still learning to, uh, stagger, as Romero himself was busy sketching the zombie film as we know it today.

With a higher budget and a bigger scope, Dawn was the ultimate zombie movie of its time.

Ten years after he shocked audiences with his claustrophobic vision of an America tearing itself apart in the scrappy Night of the Living Dead, Romero confidently takes a leap into a world descending into chaos. 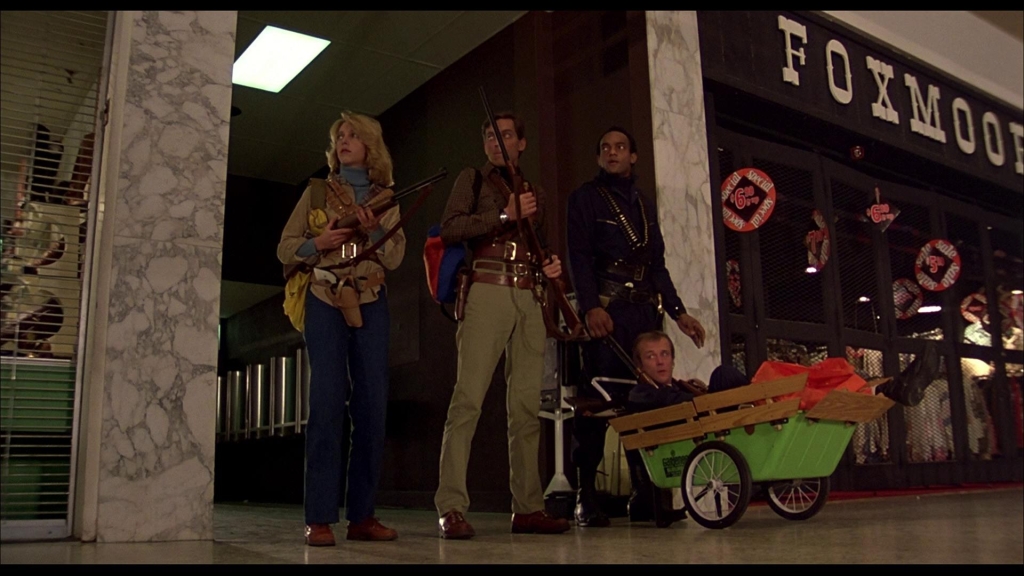 Romero wastes no time making sure we understand that brutality is the order of the day, with a bludgeoning raid of an apartment project overrun with zombies.

Racist cops hurl slurs as the inhabitants fight back against the invading, trigger-happy S.W.A.T. teams charging their way inside. It’s a sobering and pummeling table setting that only threatens to up the stakes.

When the film flees the frenzied anarchy of a ruined Philadelphia, the arrival at the mall is rolled out with towering gongs on the iconic soundtrack from Goblin.

From here, we get a glimpse at what it would be like to really get free-roam of your local shopping center. No matter how often you’ve seen Dawn, you still can’t help but get caught up in the “what if?!” side of the film.

It’s a dream concealing a consumerist nightmare, where the buzzy thrill of having everything you could possibly want gives way to boredom, detachment, and greed, which paves the way for a chilling confrontation between the haves and the have-nots.

Perhaps one of the most thoughtful horror epics to ever see the rising light of day, Dawn of the Dead is a fluid experience, darting from stomach-churning terror to pulpy action while also making room for a few gags that lighten the head-spinning punches it dolls out.

It’s brilliantly acted, paced, and woven with more iconic moments than you could shake a handful of innards at.

The gore effects provided by Tom Savini, who would go on to become a superstar based on his work here, are still bruising to this very day.

And it’s nearly impossible to wipe some of the zombies themselves from your mind as they wander the parking lots and aisles of the mall as an overhead speaker cheerfully calls, “ATTENTION ALL SHOPPERS!” — which is met with blank head swivels from our blue and gray-faced cannibals on the hunt for an all-you-can-eat buffet.