Despite one misstep, “V/H/S/99” is a consistently fun and satisfying anthology that delights far more than it disappoints. 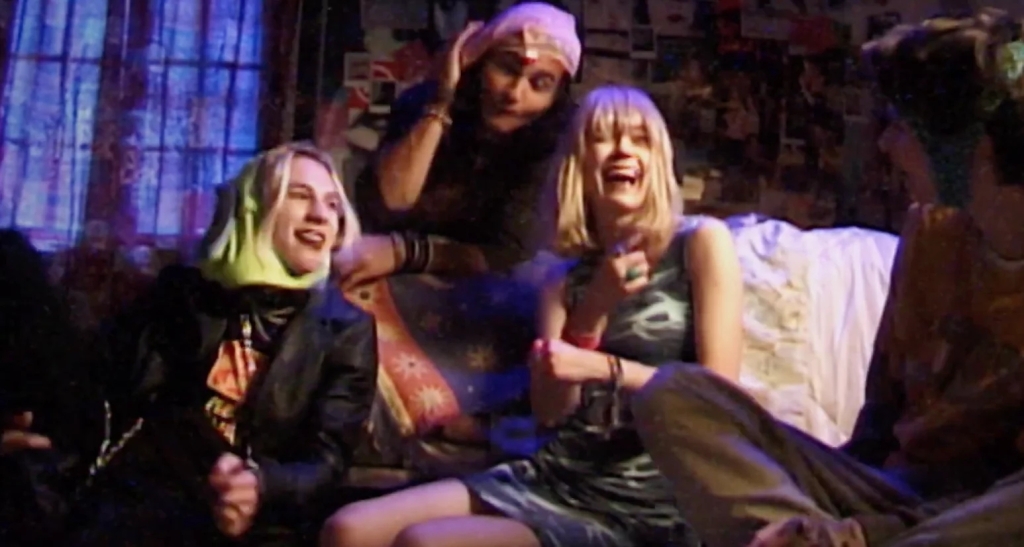 The first segment, titled Shredding, sees Maggie Levin (Shadowprowler, Into The Dark: My Valentine) step into the director’s chair. A young, disrespectful Punk Rock band using the moniker R.A.C.K. pass their time by filming one another perform Jackass-style stunts and gross-out tricks for their web show. When R.A.C.K. learn of an all-girl Punk band called Bitch Cat who burned to death during a freak fire at a local music venue, obviously, they cannot pass up a morbid opportunity to seek out the venue themselves for their latest video.

As the quartet explores the abandoned site, only Ankur voices his concern regarding disrespecting the dead. He warns his bandmates of the Bhuta: a supernatural creature or restless spirit of Bengali culture who possesses the souls of the living.

Ankur is ridiculed, pranked, and shamed by his bandmates for voicing his spiritual beliefs, which does not bode well for anyone involved.

I won’t spoil the twists within this segment, but I will applaud the break-neck pace in which it switches up Horror’s sub-genres to ensure that the ending remains an unpleasant surprise for viewers.

Shredding sets up a quartet of thoughtless, disrespectful, irritating people to great effect; you will likely cheer when Karma catches up with them. This is a solid Splatter Punk segment that utilizes exaggerated gore, sickening practical FX, and late 90’s slang to ensure an authentic nostalgic trip for us Millenials.

Here, any lingering tension is swapped for fast-paced madness, which showcases some excellent practical work and prosthetics. 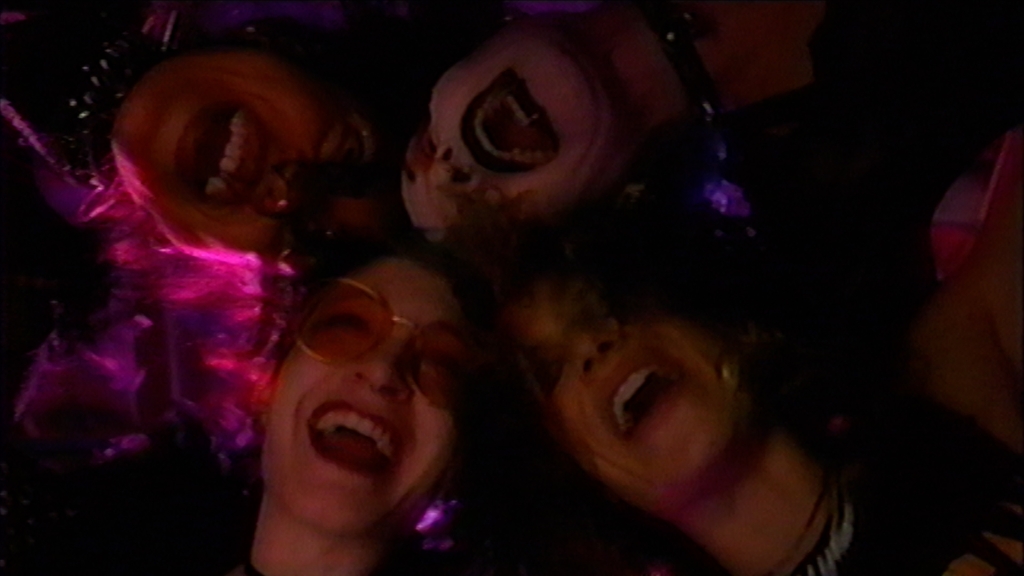 Much like Punk Rock, Shredding is not here to make you feel nice; it aims to revolt, offend, and make a statement quicker than you can Pogo your way to safety.

The second story, Suicide Bid, was written and directed by Johannes Roberts (The Strangers: Prey At Night, The Other Side Of The Door, Resident Evil: Welcome To Raccoon City). In this segment, college Freshman Lily is desperate to join the Beta Sigma Eta sorority and will try anything to feel as though she finally belongs with the elite. However, her roommate warns her that applying to only one sorority is known as a Suicide Bid; if an applicant chooses only one house and is rejected, she will be barred from further applications and seen as an outcast.

The Beta Sisters offer Lily a choice: perform their Hazing ritual, and she will be guaranteed acceptance into their Sorority.

The ritual is simple: spend a night buried inside a coffin just as the other Sisters once had to do during their own Hazing process.

This story deals with bullying, group coercion, and the crippling pressures that can befall young girls who are yearning to belong. When Lily climbs down into her coffin, she is given a few small items in which to aid her: a torch, an emergency box which she must only open if she chooses to quit the ritual, and a video camera to record what she experiences from inside her claustrophobic confines.

The girls tease Lily, warning her of Giltine — an Urban Legend about the restless spirit of a previous Freshman who died by the same ritual and who seeks out a companion to take to the Underworld.

The Suicide Bid segment was extremely effective for me. Seeing Lily bawling and screaming through her distress is made even more claustrophobic thanks to the use of tight, constricted spaces and limited camera angles, which mainly focus on her increasingly panicked face.

This is NOT a segment for anyone who suffers from Claustrophobia. However, for those who can tough it out, it succeeds in helping the viewer to empathize with poor Lily and to share her utter fear and panic alongwith her.

Suicide Bid warns of the extreme lengths young people will endure in order to feel like they belong, and it presents its own new folktale, which marries Urban Legends with Mean Girls culture.

Ozzy’s Dungeon comfortably takes us to the halfway point in this anthology, and it is written by Zoe Cooper (actor: Bliss, Southbound Tales) with Flying Lotus (Royal, Yasuke) directing. This story centers on a children’s game show where contestants participate in physical challenges for a chance to visit the titular dungeon, where Ozzy will grant them one wish.

The episodes are aired on television, and when a contestant suffers an injury, it becomes clear that health and safety are not a priority for the showrunners. When a young girl named Donna from an impoverished Detroit family enters the contest, she is grievously injured, and her mother exacts revenge upon the show’s former host years later.

This is a story of retribution and asks the viewer just how far they believe a mother will go to protect her children.

This segment banks on the viewer siding with Donna’s unhinged mother and exploits our willingness to believe that a parent always has their child’s best interests at heart. 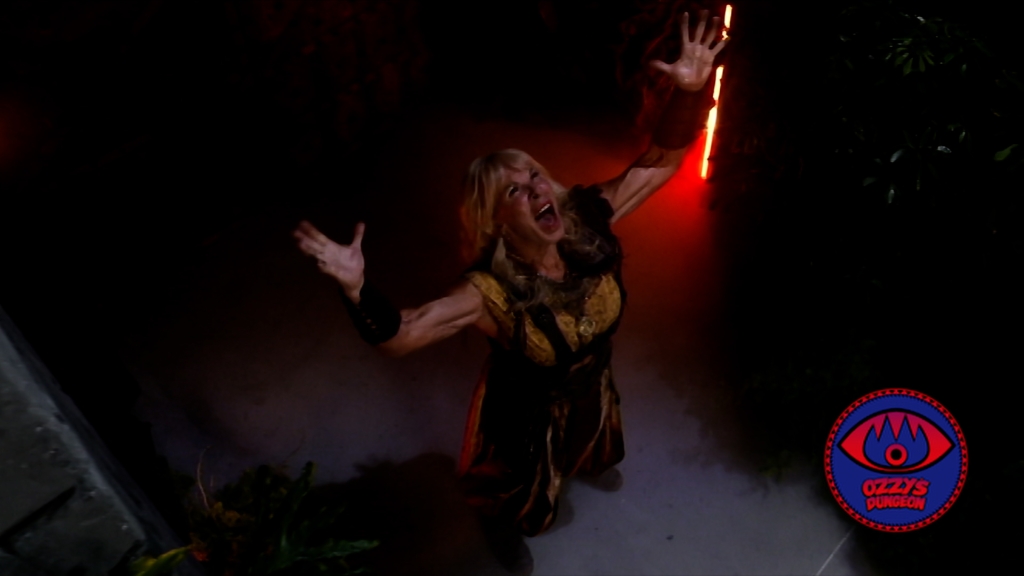 Brady, the young teenager filming these segments, is interrupted by his older brother, Dylan, who bursts into the frame to steal his video camera. Dylan uses the camera to film himself and his friends pranking each other, sleazing over unsuspecting girls, and even Up-Skirting.

Personally, I found this to be the weakest segment as it fails to entertain, invoke dread, or serve much of a dramatic purpose other than as a neat plot device. Unfortunately, weak writing and a rather predictable conclusion mark this segment as the one skippable part of the movie.

The final story, To Hell And Back, is written and directed by Vanessa & Joseph Winter (Deadstream).

On New Year’s Eve, 1999, videographer friends Nate & Troy are hired to film the celebrations. However, the real reason for their services is revealed: they are to record a Coven of witches as they perform a demonic ritual. Initially skeptical of their clients, Nate assumes that the ritual is simply a prank until they find themselves dragged down to Hell.

Mabel is a damned soul who speaks in cryptid sentences and lives like a Feral animal scrounging whatever she can to survive whilst she dodges demons and the damned alike. She is what you get if you mixed Tank Girl with a Warboy — an anarchic Virgil who guides Nate & Troy across Hell. Her chaotic energy is both alluring and untrustworthy.