Give this strange but compelling story time to settle, and you’ll be in for a satisfying journey into the mysterious unknown.

Cosmic Dawn visits a lot of interesting places in its story.

It’s a little bit alien abduction movie and a lot of cult thriller, with just a dash of family drama. Because of this, the film sounds like it has taken on too much to be successful. And those fears are at first exasperated by the film’s chaotic opening, which can be difficult to follow.

In June 1997, a young girl named Aurora watches as her mother is taken away by aliens. An undisclosed amount of time later (at least ten years have seemed to have passed), Aurora (Camille Rowe) is understandably still haunted by the incident.

Cosmic Dawn then seems to move ahead four years before coming back.

It is not the smoothest of openings and may even turn some away. In fact, Cosmic Dawn is an excellent example of how important the beginning of a story is.

However, once the audience is able to get a grasp on what is happening, things become very enjoyable. 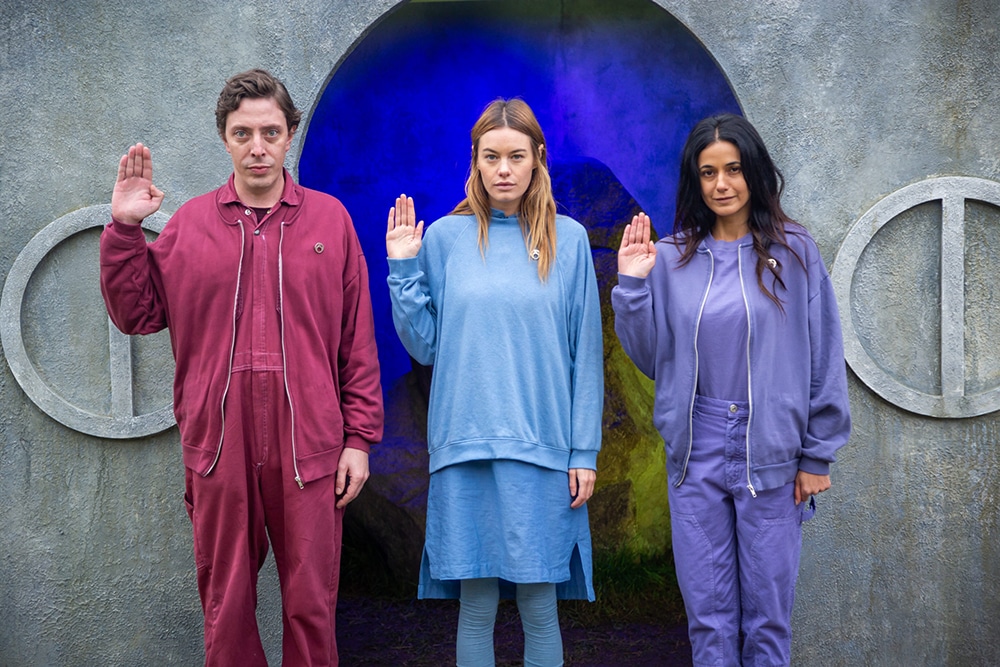 There is still some mystery as to how everything ties together, but there is none of the confusion found early on.

Telling a nonlinear story is very difficult. Since the plot plays with time, the introduction of characters and what they mean in the grand scheme play out differently. Motivations become woven into the narrative, and character development is done with the audience often knowing the end result.

Cosmic Dawn handles all of these things very well after the rough start.

At this point, the film becomes more of a mystery to be solved or a puzzle to be pieced together. As the plot progresses, questions are presented.

Is there truly a tie between all the members of the cult or is it a one-woman hoax?

It is in these moments that the movie seems most comfortable, and therefore, effective.

Audiences will find it easy to be drawn into the two-pronged narrative.

Cosmic Dawn builds a tense atmosphere at the cult’s base.

As is the case with most stories about UFOs, there is always the question of what is real and what people want to be real. The fact that something constantly seems off-kilter, and the knowledge of where Aurora will be in four years, adds to the discomfort.

Cosmic Dawn makes the most of all of its characters.

None of them seems superfluous, and the plot moves at a steady pace. There is no wasted motion in the movie. And though there is a climactic confrontation, action is at a premium. This is a film that is more concerned with conveying a feeling.

Will the film change how people feel about UFO cults? Probably not. But the fact that writer-director Jefferson Moneo’s claims Cosmic Dawn is based on an extraterrestrial encounter he had as a child is certainly interesting.

Either way, it is certainly worth a watch.