In our newest column, our team will be reviewing horror films currently available to watch for free on Netflix. We’ll be recommending movies we think are worth your time, and we’ll try to help you avoid the truly awful ones. 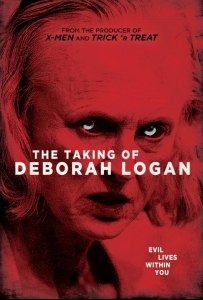 It’s not news that found-footage films are increasing in popularity, especially among Indie Horror producers. But, The Taking of Deborah Logan (2014) does it in a way that makes it feel close…makes it feel like it could happen to you or someone you know.

What’s most refreshing about director Adam Robitel’s debut film is that it’s shot documentary style as a thesis on Alzheimer’s Disease for college student Mia Hu (one of three crew members setting up shop in Deborah’s house), lending an almost professional quality to the footage.

The film begins with the three students driving up to the large home nestled deep in the woods. They are immediately greeted by Deborah’s daughter, Sarah, who moved back home to help her mother as the disease progresses. Sarah immediately asks about compensation, and we learn that Mia’s college is going to pay the Logan family for allowing the students to study them as Deborah’s Alzheimer’s advances. And, it’s clear that Sarah and Deborah desperately need the money. Then things take a turn for the wicked as Deborah goes under 24/7 surveillance.

All My Children’s Jill Larson steals the show as Deborah. And, the audience can’t help but feel simultaneously terrified of and concerned for her. Her performance was charming and riveting as the story twisted deeper into the plot. Though, that’s not to say that the rest of the cast does not add to the sense of frightful tension, but Larson is by far the stuff of nightmares.

Michelle Ang (Mia Hu) does a great job as the grounded skeptic, dismissing her crew’s mounting belief that something paranormal may be happening at the house. And, the rest of the supporting cast are believable as unlucky bystanders in this unfortunate situation.

Most found footage films tend to be on the awkward side. Unclean cuts and shaky camera movement either make it difficult to make out what’s on screen or make the audience a wee bit seasick. But this film has wonderful cinematography throughout. Stable, simple, and  candid like a well-filmed documentary, making it more realistic.

The tone of the film is extremely dark and eerie, and, though the movie may not be crap-your-pants terrifying, it is creepy. Really creepy. Watching it creates a tingling feeling on the nape of your neck. A whisper of fear that tickles at the back of your mind well after finishing the film.

Though, there isn’t a hidden meaning or moral in found footage style Horror films, the story itself is enough to stay with you for quite some time. Kudos, to Robitel and his crew for creating a deliciously dark fantasy for us all. We eagerly look forward to more.