Weird and Wonderful: A Review of SHE

I don’t even know where to begin with SHE. It’s insane, over the top, and cannot be directly pigeon-holed into one particular genre. SHE is like a goodie bag from a completely demented cinematic funhouse. If we were in Pee Wee’s Playhouse, the ‘Word of the Day’ would be AWESOME!

A large number of people showed up to the Alamo Drafthouse screening of SHE in Austin. In a theater almost to capacity sat an eager crowd, consisting mainly of first time viewers, including myself. Like the mythical unicorn, this is an elusive film that is sometimes heard of, spoken of, and even known in some small circles—but it’s rarely ever seen. And what a magical beast it proved to be! 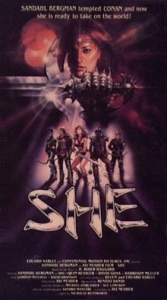 The screening was hosted by Drafthouse as part of their weekly “Weird Wednesday” programming. Our Host for the evening, echoing the enthusiasm of the crowd, shared some backstory with us. Apparently, one of the Executive Producers of SHE, Helen Szabo (Sarlui) was quite savvy at her job, backing projects such as Killer Klowns from Outer Space, I, Madman, Monster Dog, and The Further Adventures of Tennessee Buck.

Avi Nesher, the film’s director, went on to have quite a successful, award-winning filmmaking career in Israel (where he hails from). He received accolades at the Chicago International Film Festival in 2010 with his film Matchmaker and in 1993 at the Avoriaz Fantastic Film Festival with Doppelganger. With an Ivy League education from Columbia, Nesher seems to prefer to erase this little film from his resume.

Our Host explained he tried to reach out to both Nesher, as well as his PR people, but no one would return his calls or emails. Despite American Genre Film Archive (AGFA) snagging one of the very few 35mm reels in existence of this film, it lacked the opening and ending title credits. So, Joe Ziemba and Drafthouse projectionist Tiernan O’Rourke spliced together the VHS credits to the celluloid (using their own personal VHS copy of SHE), to ensure the audience was able to view the entire film it’s all its original glory (including those amazing animated sights of skulls and swords).

Also, please note that Nesher, Szabo, and company (MGM) got this rolling before CONAN, THE BARBARIAN (1982) was released. One of the leads of SHE, Sandahl Bergman, was also actually in CONAN as well as RED SONJA.

As SHE begins, it relays to the viewer it is Year 23 After Cancellation. It seems as if electricity is either scarce or non existent. Livestock and bread are coveted, as well as leather goods. The film opened to me, reminiscent of BEASTMASTER meets post-apocalyptic wasteland via MADMAX, meets TIME BANDITS.

The place in time of the story is very ambiguous, and intends to be. Something out of place and very strange is around every corner in SHE. Styles of clothing differ greatly, as do the weapons and manner of speech. I mean, the first bunch of adversaries our two hero brothers encounter are a group of ‘punk like’ swastika-wearing gang members. However, the brothers themselves look as if they just walked out of biblical times with their rags and sandals. The brothers battle their way inadvertently to the temple and followers of SHE, a warrior Goddess, whom many are fond of and fear. SHE senses the two are of no threat to her, and somewhat feel for the plight of them. They simply seek to rescue their sister who was kidnapped.

So, the brothers Tom (David Goss) and Dick (Harrison Muller Jr.), with the assistance of SHE (Sandahl Bergman) and her right hand Bad Ass Bitch, Shandra (Quin Kessler), continue on the quest to save the sister in peril, Hari (Elena Wiedermann). Yes, that’s correct…Tom, Dick, and Hari. But, the shit they encounter is definitely not your garden variety manner of obstacles. This insane story was honestly adapted from a novel penned from the extremely creative H. Rider Haggard.

The group of heroes encounter everything from oversexed, overachieving werewolves whom claim “they have no God, they do business,” over an extravagant meal laid before the travel-weary Tom and Dick; to Mummies wielding chainsaws and grudges; to a solemn Communist-like sect that has a leader with telepathic tendencies. It’s one hell of a ride! An unexpected, unfathomable, and unforgettable journey into a seemingly LSD-induced genre geek’s wildest fantasy. The crowd loved every minute of it, too. Cheers, laughter, and applause would simultaneously erupt during the film. The audience was glued to the Big Screen as we followed the unlikeliest of characters through an endless maze of weird yet wonderful challenges.

Words, can simply not do SHE any sort of justice. No assortment of words, phrases, anything of the sort, can make someone comprehend the level of sheer, “WTF did I just watch?” Do yourself a damn favor, and check this one out if you dig some mind numbing, mind blowing, genre defying, memorable, worthy, and above all, classic and unique piece of cinema!