TICKETS TO THE HORROR SHOW: A Sneak Peek at “The Funhouse Massacre” 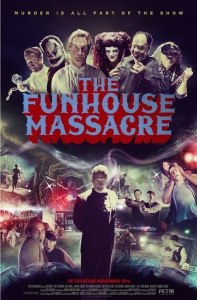 More times than I can count, I’ve been let down by a disappointing film with a cool looking poster and a well-executed trailer. Like an intentionally misleading profile on Match.com, many films boast smart marketing and sexy packaging but fail to inspire any real love when the façade is stripped away. Fortunately, there are those real gems that meet and even exceed high expectations.

The Funhouse Massacre is one of those movies, which is just as entertaining, just as gory and blood-soaked, just as delightfully over-the-top as you could hope for. As the name implies, this film is tremendous fun and is definitely a visual feast for fans of gory, old school practical effects.

Written by Ben Begley and Renee Dorian, and directed by Andy Palmer, The Funhouse Massacre is a clever and seriously enjoyable love letter to classic 80s slashers. It’s heavy on comedy and dripping in cheese (and I mean that in the most loving way possible), but it never neglects the horror. This movie is overflowing with creative kills and bloody carnage.

Exceptionally well paced and fun from beginning to end, there wasn’t a moment in this movie where I wasn’t completely engaged. It starts off with a bang. Before the opening credits, we get introduced to a secret asylum for the criminally insane —Arkham Asylum meets Guantanamo Bay — where the worst of the worst are locked away without a trial or any due process. The madhouse is run by, none other than, the brilliant ROBERT ENGLUND.

On this day, which also happens to be Halloween, Englund’s character has granted a rare interview to a reporter, the lovely Ms. Quinn (Candice DeVisser). As he conducts a tour of the facility, he tells her in that famously raspy and ominous voice of his, “Dahmer and Bundy and Gacy…they’re just the ones that got all the press. We house the ones that you whisper about around the campfire.”

At this point, we get introduced to five of the notorious killer inmates: the cannibalistic chef “Animal” (E.E. Bell), the demented dentist “Dr. Suave” (Sebastian Siegel), “The Taxidermist” with a penchant for stuffing humans (Clint Howard), the murderous former wrestler “Rocco the Clown” (Mars Crain), and the Jim Jones-like cult leader “Mental Manny” who led his followers to slaughter (Jere Burns).

The five madmen are joined by a sixth psychopath, the Harley Quinn inspired “Dollface,” played by DeVisser after she sheds her Ms. Quinn (wink wink) alter ego. In the film’s first (but far from last) epic bloodbath, the six killers escape the asylum and head to the nearby funhouse for a night of murder and mayhem. The title credits flash across the screen, and the film really gets rolling.

The rest of the film centers almost entirely around Halloween night at the funhouse, a buzz-worthy Halloween attraction whose gimmick just happens to be recreating the gruesome crimes of real life serial killers. And those serial killers just happen to show up, properly dispose of the actors hired to portray them for the night, and insert themselves into the action. 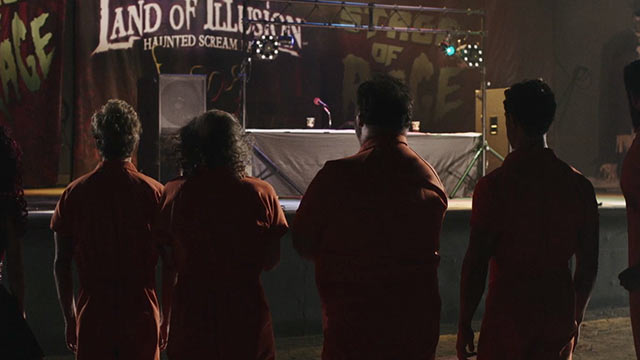 Throughout the night, we follow three groups of people. There are, of course, the killers who are gleefully wreaking havoc and terrorizing unsuspecting funhouse attendees. Then there are the core cast members, a group of college kids who work together at a local diner. They’ve clocked out and headed over to the funhouse to see what everyone has been buzzing about, oblivious to the actual horrors that await them. Finally, there’s a sheriff (Scottie Thompson) and her inept deputy (comic relief Ben Begley, who also co-wrote the film), trying desperately to stop the carnage.

The six killers of the film, the obvious main attraction, are worth the price of admission alone. They have a great chemistry together and are a blast to watch. Cain’s hulking and menacing Rocco brings the most legitimate scariness to the group. He’s got that silent, physically intimidating, creepy mask-wearing psychopath thing down. De Visser is captivating as the adorably insane doll faced killer with a talent for knives. Bell and Siegel bring the dark humor, and Howard lends his considerable star power in a small but memorable role. Finally, veteran actor Burns is brilliant as the smart and sadistic leader of this highly dysfunctional family.

The film also boasts a really likeable main cast, something many modern horror films fail to deliver on. Matt Angel leads the cast, playing the socially awkward but charming Morgan. He brings a lot of the dry humor and wit to the film and is extremely enjoyable to watch. There’s also his love interest, the sweet and no-nonsense Laurie, played by Renee Dorian. The two make an adorable “almost” couple, joined by the sexy free spirit, Christina (Chasty Ballesteros), and her jock boyfriend, Jason (Sterling Sulieman). Rounding out the group of friends is the diner cook, Gerardo (Erick Chavarria), who acts tough but is too scared to enter the funhouse with his co-workers.

In a rather smart move, Parker fills the rest of the film with an insane amount of extras. This gives the movie a much bigger feel and adds to the manic chaos of ensuing events. The funhouse is literally packed with wall-to-wall co-eds, all eager to be a part of the biggest party of the year. There’s a lot of riffing on today’s social media obsessed youth. And the plethora of disposable pretty people gives our killers plenty of fodder for their deranged fun. As the brutal murders take place in full view of many spectators, no one suspects a thing—it’s all just part of the show.

This film promises a massacre, and it certainly delivers. With an outrageously high body count and exceptional practical effects, it’s eye candy for gorehounds and fans of old school slashers. Parker employs the FX talents of the great Robert Kurtzman (Army of Darkness, From Dusk ‘Til Dawn, Predator) to deliver the gloriously excessive, bloody and brutal kills. 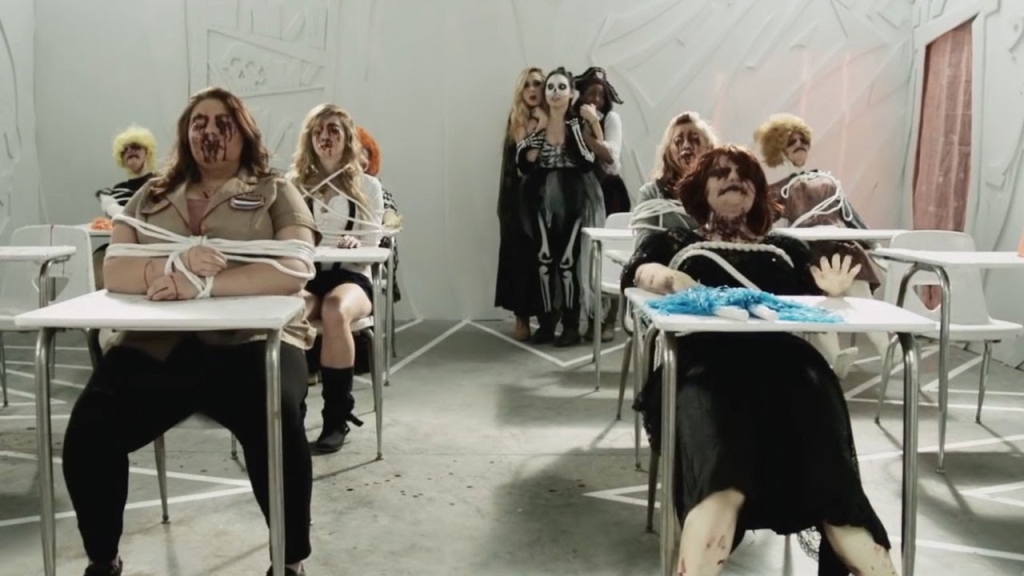 There are some obvious and significant plot holes. Trust me, you won’t care. The filmmakers do a great job keeping the film moving at a great pace and letting the impressive set piece (the funhouse looks incredible) and the entertaining characters run the show. We don’t get bogged down in a lot of story or exposition. There aren’t any meta themes or overly dramatic moments, no subtext or deeper meaning. This is pure, adrenaline pumping, unadulterated fun from beginning to end.

The Funhouse Massacre premiered at HorrorHound to rave reviews, winning the BEST FEATURE and BEST SPECIAL EFFECTS awards, and at HorrorShow Film Festival. After all the positive buzz, AMC Independent picked up the film and is giving it a limited theatrical release in 20 markets ahead of its VOD release. If you’re lucky enough to live in a city where this movie will be showing (click here to search for tickets), I urge you to go see this right away. I can only imagine how much fun this movie would be on the big screen with an audience. If not, definitely be on the lookout for this film as soon as it is available for home viewing. We’ll keep you posted as soon as we know more, too.

THE FUNHOUSE MASSACRE is a ridiculously fun, funny and fast paced horror comedy that pays loving tribute to classic, old school slashers. Featuring one of the highest body counts ever and exceptional practical effects, this film knows how to give horror fans exactly what they want—interesting psychopathic killers, a likeable cast of would-be victims, and plenty of bloody carnage. A must see!