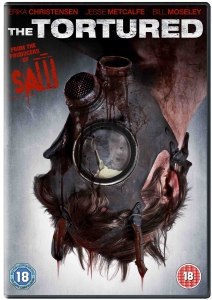 The Tortured is a 2010 horror thriller directed by Robert Lieberman and written by Marek Posival. Apparently, it spent quite a bit of time in production limbo. I was drawn to this film by the promise of Bill Moseley as the pedophile murderer who himself becomes the victim of torture at the hands of grieving parents. Bill may not always appear in perfect movies, but his performances are always memorable and enjoyable. This film was no exception. Bill is brilliant and terrifying as the unstable psychopath you love to hate. I was shocked, however, to learn that Bill was not the original choice for the role that he seems so perfect for. Originally, the pivotal role was slated for Charlie Sheen. When Sheen bowed out, Moseley took over.

The Tortured is about an upper-middle class couple whose six-year-old son Benjamin is abducted from his backyard (while his father leaves him unattended for mere minutes to retrieve sunscreen from the house) and violently killed by Bill Moseley’s character, John Kozlowski. Kozlowski is apprehended and put on trial, where he is found guilty. Yet, a plea bargain lands him a significantly reduced sentence. Benjamin’s grieving parents, a doctor (Jesse Metcalfe) and a realtor (Erika Christensen), are enraged by the perceived failure of the legal system to properly punish their son’s killer. So they decide to take matters into their own hands, hijacking a prison van transporting Kozlowski, and taking him to a remote cabin where they plan to mercilessly torture him for days.

The premise of the film is intriguing, especially for any parents who can relate to the unbearable anguish and unrelenting rage of the parents. It’s easy to understand the desire for vengeance and the conflicting emotions that come from trying to decide what’s right or wrong in such a horrific scenario.

Metcalfe and Christensen do a good job selling the horror of the situation, even though little to no time is spent setting up their characters or giving us a compelling reason to care about their plight. The introduction to the family, the killer, and even the child’s murder happens within the first ten minutes of the film. Most of the intended gravitas of the situation happens via flashbacks, showing images of the parents and their son in happier times. It’s heavy handed and, while relatively impactful, you can definitely feel the intentional manipulation of your feelings.

If you search for this film on the Internet or read its reviews on RottenTomatoes.com, you’ll be understandably hesitant to give it a try. However, I found it much more redeeming than most people are giving it credit for. I found it on Netflix and watched it on a whim, with no expectations, and I think that certainly aided my enjoyment of the film. For me, it was an effective and disturbing thriller that kept me on the edge of my seat.

As much as it worked for me, it’s by no means a perfect film, and much of the criticism it received was fair. So much of your personal experience with this film will likely be driven by your expectations going in and knowing exactly what kind of film you’re gearing up for.

There is a significant focus on torture scenes that feel like they go on forever, but the torture never rises to the level of films like SAW and Hostel that made the subgenre so popular. It’s soft core torture—disturbing and hard to watch, but never truly gruesome or over-the-top. These aren’t seasoned psychopaths subjecting their victim to unrelenting and nightmarish suffering. Their grief is palpable for sure. But they remain morally conflicted and uneasy throughout the torture of their son’s killer. They want him to suffer as he made their son suffer. But there’s a lack of commitment and comfort with their decisions that keeps this from going to a truly sadistic and punishing level.

In fact, this film is much more interested in exploring psychological torment rather than the purely physical kind. It’s an examination of the nature of revenge and its ability (or inability) to heal the deepest wounds, a look at what makes us human and what makes us monsters, an appropriately devastating picture of unspeakable grief and the lengths people go to survive the unthinkable.

Because of that, this film places itself in an unfortunate predicament. Fans of true torture porn will not be left unsatisfied by scenes that never quite go far enough—scenes that bring nothing new or innovative to the subgenre. On the other hand, horror fans turned off by that brand of entertainment will find too much of it here to suit their tastes. I think it’s one of the main reasons the film received so many unfavorable reviews. It doesn’t really know the type of film it wants to be, and it gets mired down in that terrible middle ground that keeps it from being either truly horrific or truly thought provoking.

This is also one of those films that many consider only peripherally a horror film. It’s much more aptly described as a psychological thriller. For me, there was plenty of horror, but it’s the kind of horror derived from horrific real-life scenarios rather than traditional scares and gore. As a parent myself, it was uncomfortably easy for me to empathize with the characters and the unspeakable horror they experienced at the grizzly death of their young son. For others, the impact of the unfolding events may be considerably less.

Let me be fair here. The script is not great. It’s full of clichés and contrivances that are frustrating and implausible. There’s a pretty significant twist ending, which I won’t ruin here, but it’s extremely divisive. You’ll either love it or hate it. Personally, I loved it and thought it added a nice bit of depth and moral ambiguity to the film. However, it does further exasperate the problems with the script and brings up questions of logic and plausibility.

Your tolerance for this will depend on your level of character investment up to this point, your ability to suspend your disbelief, and your appreciation for the psychological aspects of the thriller. I was able to properly rationalize away the questions the ending brings up. But, in fairness, my rationalizations were based on my own interpretations and not on any real understanding offered by the filmmakers.

IN SUMMARY (END OF SPOILERS)…

I thought this was a well-made film that kept me fully engaged and invested. It moves at almost perfect pace. The film was well acted, and the characters were well written. The torture scenes, while not as gruesome or intense as you might expect, worked for me and were quite bloody and realistic. There’s some great tension and some really effectively creepy scenes, including an early scene where the cops discover the killer’s location and find the murdered child, moments after his brutal death. “Hush Little Baby” plays on scratchy vinyl in the background, skipping repeatedly in an ominous and unsettling way.

While it won’t resonate for everyone, I enjoyed the deeper psychological aspects and the multi-layered examination of “justice” and revenge. Bill Moseley, although sadly under-utilized, gives a stellar performance.

I have heard criticism heaped at this film that it borrows heavily from a French film called 7 Days, which shares the same premise and storyline but is significantly better executed. I haven’t seen that film, so it’s hard to comment. But I definitely want to check that one out so I can make an accurate comparison.