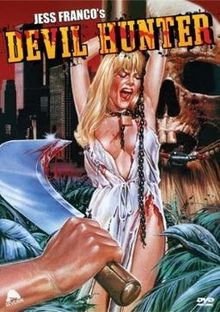 Synopsis: An actress is kidnapped and taken to an island to be held for ransom. Her agent sends action man Peter Weston (Al Cliver) to hand over 6 million to the kidnappers and rescue her, but it doesn’t quite go to plan. Laura (the kidnapped woman, played by Ursula Buchfellner) ends up being kidnapped a second time by a tribe that worships a cannibal god. Twice in one lifetime?! Tip: if the bare human body freaks you out, probably best to not watch this film.

I’m gonna start by telling you that this film was a difficult watch and I don’t mean in terms of content. Well, I do mean in terms of content, THERE’S TOO MUCH OF IT. 102 minutes is FAR too long for this film and the director Jess Franco(pseudonym Clifford Brown) should have cut this down to around 80 minutes at a push. It’s very obviously been padded out to reach the length of a feature film and the result is a film that drains the viewer and leaves them watching the clock. I couldn’t wait for this to be over. The beginning of Devil Hunter switches between Laura enjoying herself on the beach, to a tribe chasing a woman through the jungle and back and fore and so on. There’s a repeated switch from ominous tribal drums to a relaxing beachside guitar and rather than these contrasting environments setting you up for what’s to come, it’s merely irritating and repetitive. As for the way it’s been padded out, the director has included numerous lingering close-up shots on actor’s faces, hazy dreamlike shots of trees which are supposedly the point of view of the cannibal god and don’t forget the constant zooming in and out. Franco just loves that zoom. At least I saw a lot of the pretty jungle when these useless shots were onscreen, but I probably could have done without the genital close-ups. 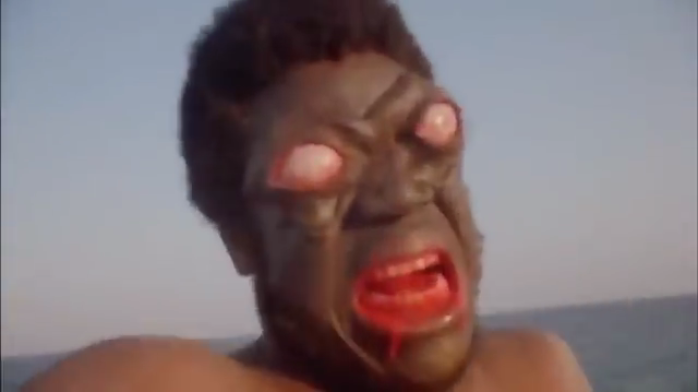 Let’s move on to the dubbing, which is a train wreck. Now I can forgive dubbing when the film makers have attempted to make it work and given the voice actors a half decent script to work with, but this one is awful. The dubbing is done in a way that it sounds like a bunch of YouTubers have overlaid their own comic interpretation of what the actors are saying. When you hear a man say “Flowers, shit!”, well what hope is there. There is one stand out voice actor in Devil Hunter who I honestly think is Simple Jack from Tropic Thunder. If you watch it, look out for the pilot who is also a Vietnam veteran – definitely Simple Jack.

The storyline in this is somewhat confusing. For the first half an hour I found myself a little unsure as to what was going on, maybe with better dialogue it would have been easier because it isn’t laid out very well on the screen. At first I thought the kidnappers were handing her straight over to the tribe for sacrifice, then it turns out that they are holding her for ransom. There is a redeeming aspect of Devil Hunter and it’s the set, or lack of one. The location is nice, it’s good to see the characters running through some real jungle rather than a tacky set and it’s the obvious setting for a cannibal tribe. Franco is definitely cashing in on the cannibal craze going on in the late 70s and 80s. There was a big boom of cannibal films including the infamous Cannibal Holocaust made in the same year & Cannibal Ferox 1981, both of which made it on to the DPP list. 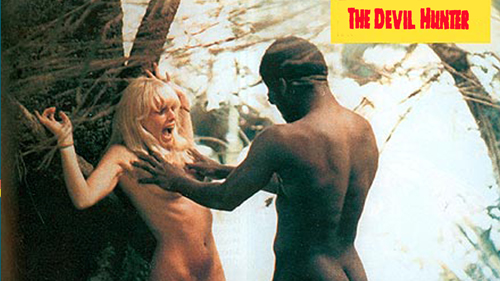 What could have made this a video nasty? There is a hell of a lot of full frontal nudity and let’s just say, I felt like I knew some of the actors inside out. There’s a rape scene with Laura and one of the kidnappers which is tame compared to other films that are on the video nasty list but it’s a rape scene nonetheless. The cannibal element alone was probably enough to get it on the list with a few bits of tacky gore here and  there, but surprisingly, there isn’t a lot of human flesh being eaten. This film is laugh out loud in places and if you’re in the mood to be bored out of your mind watching a bad video nasty, give it a go. Otherwise, I wouldn’t bother.