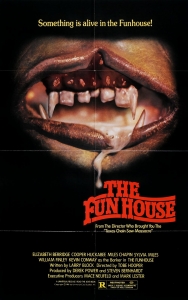 Synopsis: Set in a seedy carnival, The Funhouse is a film about a double date which goes about as wrong as any date can go. It follows four teenagers (well, one of them is actually 30 at the time of filming) that decide to hide out overnight in the carnival and when they witness the murder of the resident fortune teller, it leads to some pretty gruesome consequences for them. Strap yourself in for some carny fun! Candy floss optional.

Killer Line: Dont come back, or I will break every bone in your fuckin bodies. Beat it!

A lesser known work compared to The Texas Chainsaw Massacre, Poltergeist & Salem’s Lot, Tobe Hooper’s The Funhouse is a delightful box of treats that excellently maintains tension and anxiety throughout and certainly pays off. The atmosphere is helped along by the brilliant musical score of John Beal who has composed music for film campaigns such as the Star Wars trilogy, The Matrix and Titanic. The opening scene of this film instantly reminded me of Psycho & Halloween as we see through the eyes of an unknown masked person who slowly walks from room to room breathing just a little too heavily. This stranger walks into the bathroom where the main female character, Amy, is taking a shower and slowly pulls back the curtain before thrusting a knife at her. After a few screams, we see that it is her kid brother Joey who has definitely watched too many horror movies and this time took it too far. Why’s he creeping in on his naked sister?!  This is a lovely little nod to some past horrors and lets the audience know that we’re in safe hands.

The four characters in The Funhouse are Amy, Buzz- what a name, Liz & Richie. I genuinely did like these characters although Richie is a little annoying but he is killed first so that alleviates any irritation I might have felt. The younger brother Joey is a trooper in this film and even though children in films usually drive me a little mad, he played his part well. Kids in ’80s films had that extra bit of zing that is missing in this modern age. Amy (Elizabeth Berridge) is a stereotypical main female character, an uptight virgin who lives to tell the tale and despite making me feel a little uncomfortable when she’s naked at the start due to looking so young, Berridge does a fine job. The carnival workers, particularly Sylvia Miles (fortune teller) & Kevin Conway (monster’s dad/strip show barker/funhouse barker) stand out for me, certainly Conway who plays three characters.

The monster effects are done excellently by none other than Rick Baker who worked on An American Werewolf In London so say no more, we know he’s a genius. The monster in The Funhouse is the son of a carny and he kills the fortune teller after he’s disappointed with her skills as a prostitute. He initially wears a Frankenstein mask which he rips off and the audience is presented with Rick Baker’s creation which is impressive. An unexpected sight in this film is a two headed cow which is NOT a Rick Baker effect but a real cow. Who knows where they found that. Let’s move on to the killings in the film. I’d describe them as tame but effective. We’ve got a hanging, an axe to the head and a sword through the stomach among others.  The sword in the stomach could have been real gruesome but it’s done out of shot and we only see it after it’s gone through the carnival worker’s body – a missed opportunity really. I don’t see the lack of gore in this film as a negative, it’s not what the film was looking to be defined by and instead we have well written characters and a good story to carry us through. 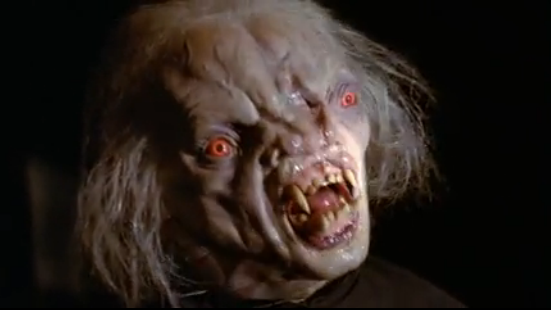 This film has a massively impressive set. Tobe Hooper had the use of a real carnival during filming and I thoroughly enjoyed the gang visiting the attractions such as the fortune teller, the magician and the nudie show, before ending up at the funhouse. The rides that you see are real and there was a time that they had to do a few takes of one particular shot and the extras were forced to stay on a ride for much too long. Needless to say, there was vomit everywhere. The bright colours and lights are fabulous in The Funhouse, and this carnival comes to life on film with a sinister personality of its very own. There are a number of stand-out shots which were made possible by the use of a 150 foot construction crane which moved surprisingly smoothly and enabled Tobe Hooper to get some excellent panning shots. The best of these is when Joey is leaving the carnival at closing time with other members of the public, and we are treated to a shot of the entire carnival and a sense of foreboding as it shuts down for the night.

The Funhouse being on the DPP’s list of films is somewhat confusing as it doesn’t really warrant video nasty status. After some research on the internet it seems that it may have accidentally ended up on the list instead of Last House On Dead End Street which was initially named The Fun House. Last House On Dead End Street is about an ex-convict who starts making snuff films, and so it seems that it might be more deserving of video nasty status than this Tobe Hooper bag of fun. Despite what I just said, watch The Funhouse. You won’t regret it; you’ll just think twice before attending the next local carnival.