You Can’t Kill Us All: “Assassination Nation” and What it Reveals About the Violence and Volatility of Teenage Girlhood in the Age of Social Warfare. 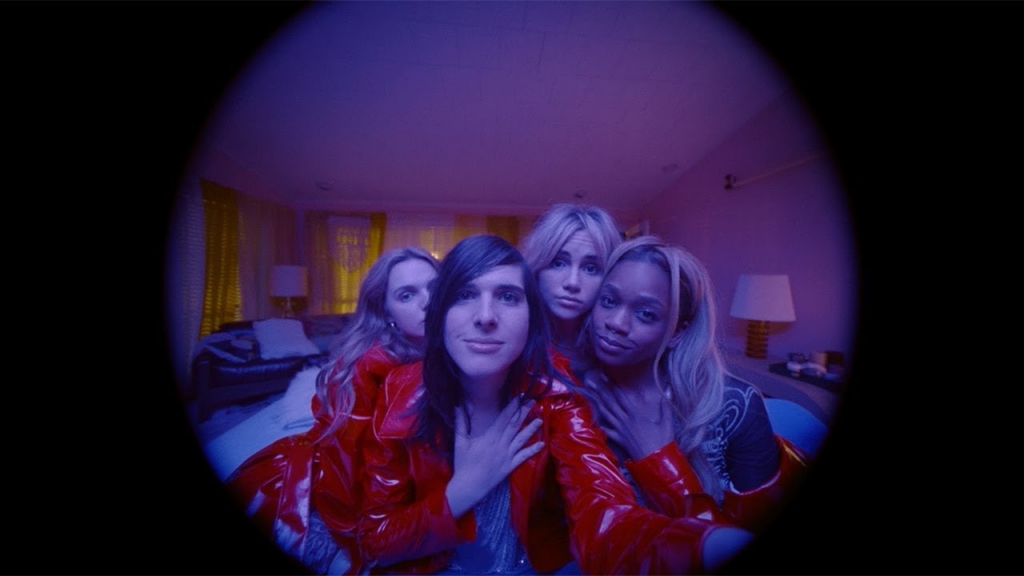 Sam Levinson’s Assassination Nation is about as subtle as a punch in the gut. However, that doesn’t make it any less artful and profound. Levinson’s social commentary, horror send up on exploitation films could have gone extremely awry had it been in the wrong hands. Thankfully, it went gloriously right  — mixing the bombastic with the serious to create a memorable and meaningful experience.

The film riffs off the Salem Witch Trials and is set in an idyllic suburban town named Salem that could quite literally exist anywhere in the United States. Four teenage girls find themselves caught in the midst of a nefarious internet hacker who leaks all of their personal information, messages, photos, videos, documents, etc. on the internet for the whole town to consume. Naturally, dark secrets come out and stoke long-held bigotry, hypocrisy, and anger. 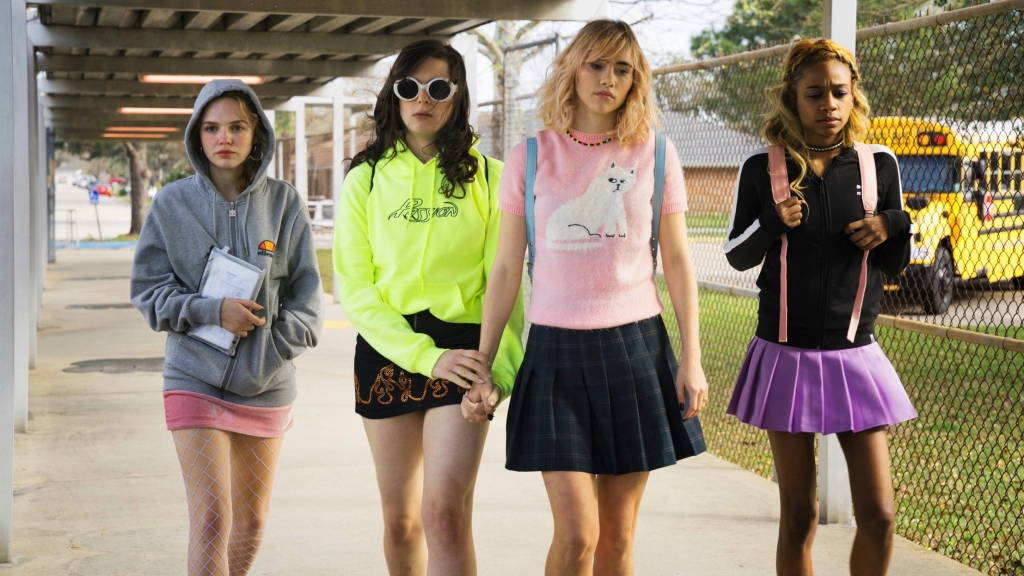 The film highlights society’s foibles and the pressures teenage girls face in this deeply flawed and misogynistic society — while drenching it all in blood, neon lights, and a catchy soundtrack. Assassination Nation is not for the faint of heart, and comparisons to other pitch black social commentary teen satires like Heathers are extremely apt.

It’s an uncommonly empathetic film despite its subject matter and doesn’t judge its main four teenage protagonists. In fact, it’s so empathetic and understanding that actress Hari Nef, who portrays Bex, was caught off guard when reading the script having at first been skeptical of the project — and rightfully so, because it was a script about teenage girls written by a man. Levinson actively works to create a varied and authentic story of teenage girlhood that includes all the violence and volatility of female adolescence.

From here on out, there will be heavy spoilers for Assassination Nation, as well as triggering content regarding transphobia, transmisogyny, racism, etc. Tread with caution. 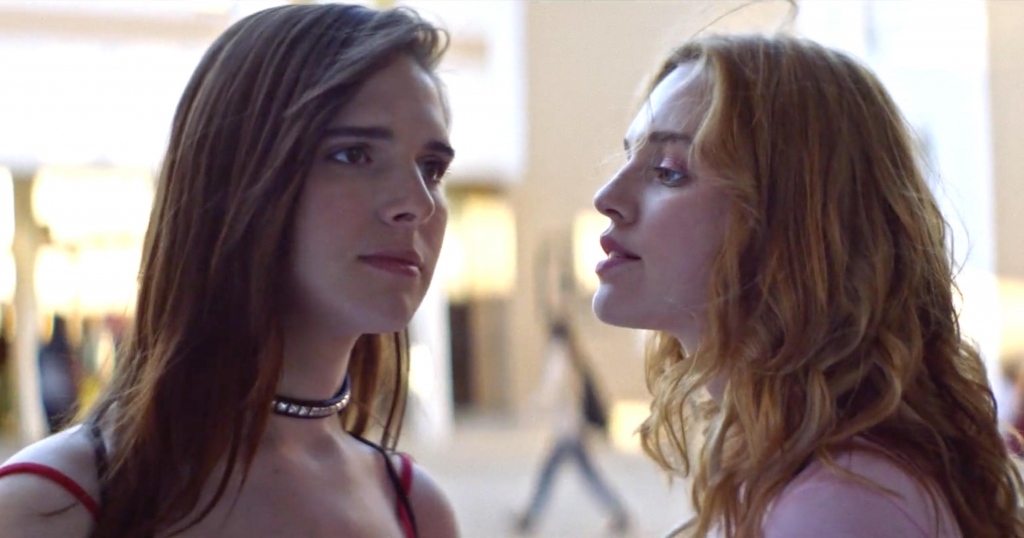 Assassination Nation offers us a tale of trans girlhood via the character Bex, straying from the cisnormative narrative that one often sees in teen films of any genre. The film sets itself apart in casting as well. Because instead of employing a cis actress to portray a trans character, Levinson chose to cast the extremely talented actress Hari Nef, who is trans.

Writing wise, Bex’s character is treated with the same delicacy and respect that her cis friends are given. She similarly faces societal pressures and dangers. But the film keeps in mind that Bex’s experience will be different compared to Lily, Em, and Sarah’s own experiences. Bex is allowed to be a full character in her own right, beautifully rounded and drawn out, and not a token trans character thrown in by a cis writer looking for an undeserved pat on the back.

Bex is a vibrant person much like her friends. Her vivacious nature and beautiful smile are infectious, as well as her blatant lack of apology to people who do reject her for living her truth. She’s a stunning amalgam of strength and vulnerability.

Bex connects with a handsome and popular jock that she shared a class with named Diamond. Diamond is attracted to Bex, and the feelings are obviously mutual. At a house party, the two finally hook up and have sex, but the encounter turns sour when Diamond asks Bex not to tell anyone about them.

Bex’s expression when Diamond asks her to keep quiet and subsequently leaves Bex alone with her thoughts is one of heartbreaking disappointment. What could have been a beautiful moment solidifying her relationship with Diamond is turned into one of pure shame because he is embarrassed for people to know that he has been intimate with a trans girl. 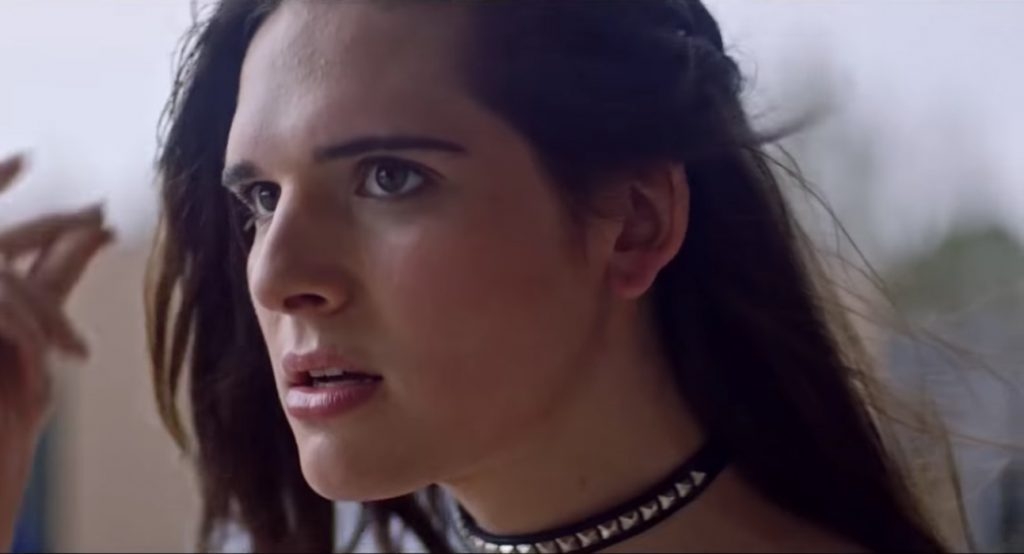 One of the biggest myths that our toxic society perpetrates is that it makes a cis man gay to love or be attracted to a trans woman, and that many men’s attractions to trans women are either based in gross fetishism or hampered by an overarching shame. This violent and incorrect myth makes dating for trans women dangerous. Many trans women are killed by men simply because they are attracted to them. Transmisogyny is a dangerous area of toxic masculinity that often isn’t explored