First Look: On Set of “Guns of Eden”

We check in with filmmaker Gregory Lamberson and actress Alexandra Faye Sadeghian onset of the new action-packed thriller “Guns of Eden”.

Award-winning author and filmmaker Gregory Lamberson (Slime City, Killer Rack) recently wrapped principal photography on his latest feature, an action-thriller called Guns of Eden. We had the pleasure of being in touch with the filmmaker while filming outside of his hometown of Buffalo, NY, to get all the details on this exciting new film.

Lamberson describes Guns of Eden as “a cross between Deliverance and First Blood, with a female hero and a dash of The Warriors.”

Although grounded in such old-school inspirations, Lamberson promises “a modern thriller with wall-to-wall action.” If the action-packed script is any indication, Guns of Eden looks to be just that, and action fans are in for a great film and a lot of fun.

The film has been a passion project for Lamberson for over 25 years, having first started the script back in 1995 while living in New York City. 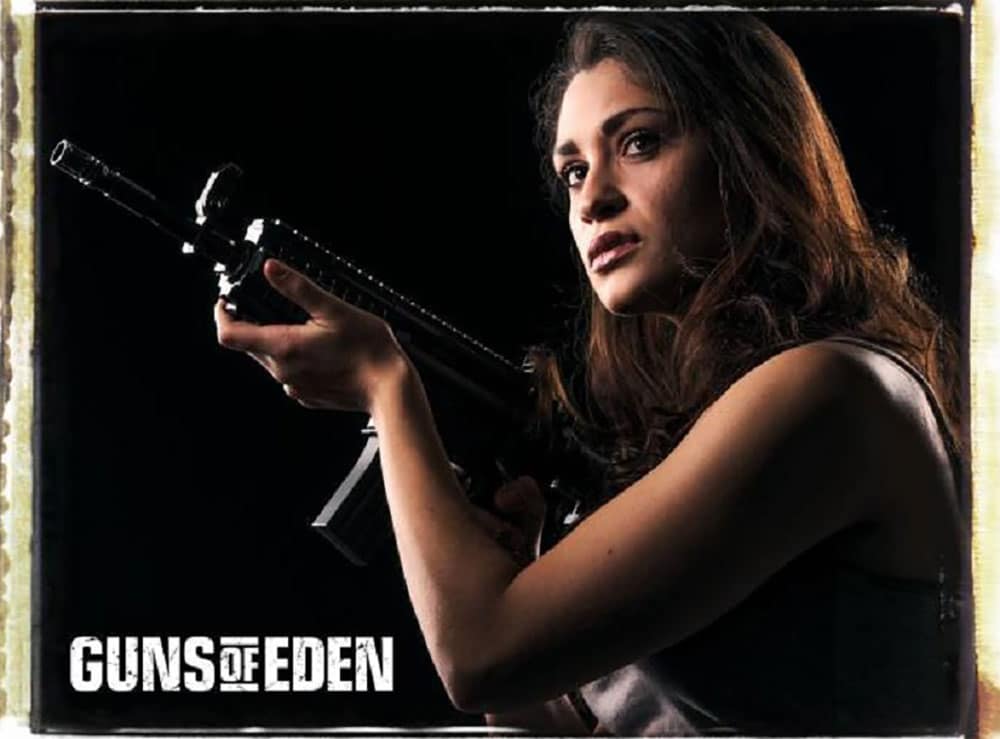 Titled God’s Country at the time, “It always seemed too large scale to realize on a micro-budget,” said Lamberson. “Every few years I’d pull it out and read it or work on it, and the last few years I started treating it like something I wanted to attempt.”

Lamberson was developing a project about werewolves when the pandemic hit, “but there are numerous reasons why it just wasn’t practical [to film] during Covid.” Because almost the entire film takes place outside, Lamberson realized that Guns of Eden would be the best (and safest) option to make a film in the time of Covid. “A project that seemed impossible to produce suddenly became the easiest one.”

Although filming outside, Lamberson notes that Covid precautions add about $100 thousand to even a low-budget film when going through SAG (Screen Actors Guild).

Originally scheduled to shoot in June, filming was pushed back one month so more people would be vaccinated against Covid. About 75 people were tested for the virus before filming, and while a handful of non-vaccinated cast members had to test weekly, everyone on the crew had to be vaccinated.

Lamberson had a portable hand washing station and two sanitizing stations on set at all times, in addition to wearing masks while filming inside. “These are small inconveniences to keep people safe and healthy,” he said. (While he feels like Guns of Eden was shot “at exactly the right time,” Lamberson wonders if the Delta Variant will prevent his werewolf script from shooting this winter.)

Guns of Eden tells the story of Megan Forest, a cop in Buffalo, New York, suffering from PTSD after accidentally killing a fellow police officer.

Megan’s partner Jeremy convinces her to go camping with himself and two married friends, Blake and Gabriella, saying the time away will do her good. While hiking in the woods, Megan and Jeremy witness the execution of an unarmed drug dealer by corrupt Sheriff John Preacher and his deputies.

The four campers run for their lives, but the deputies seal off the woods, and Preacher summons different factions of an armed militia to hunt them down, triggering a sprawling, all-out war in the woods. 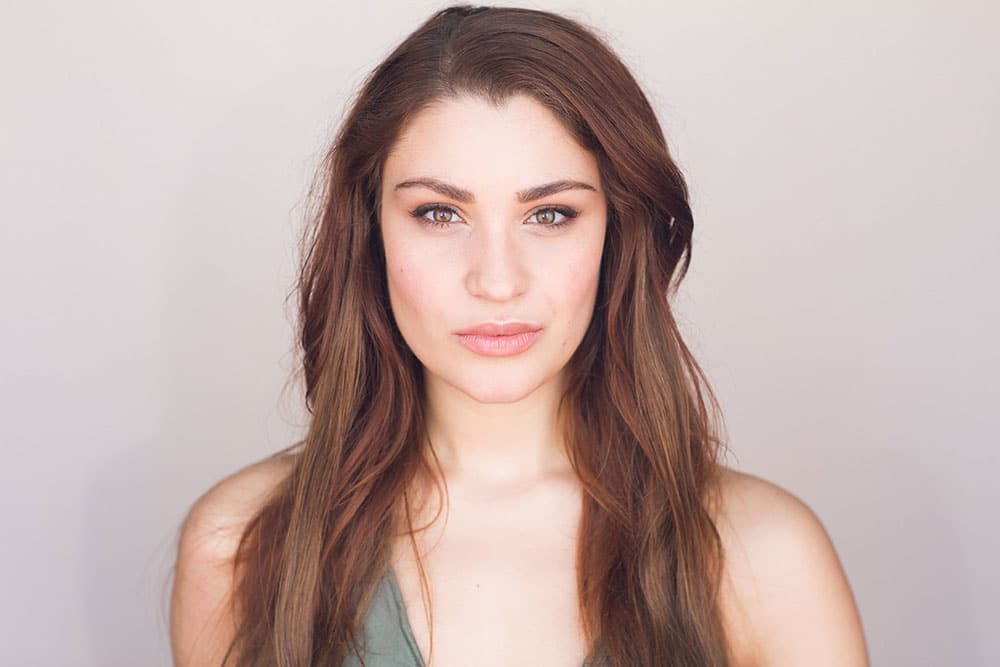 Lamberson put the word out to other filmmakers that he was looking for “a really strong, physical actress with a good attitude,” and Sadeghian (who is currently in pre-production on a feature she’s producing), came highly recommended by John Woodruff, director of Animal Among Us.

In addition to fitting the role as an actress, Sadeghian has worked on film sets as an assistant director and a make-up artist, valuable experience for an ambitious action film with a “ridiculously low budget.” Tamar, Lamberson’s wife and producer on Guns of Eden, pushed for Sadeghian right away. “She was born in 1995, the same year I wrote the first draft of the screenplay,” said Lamberson, “so we like to joke that she was born to play the role.”

“I was involved in all of the stunts and never used a double. It was a blast,” said Sadeghian of the physically demanding film shoot.

Playing Megan Forest required Sadeghian to be trained in the use of multiple weapons, from guns to knives to bows and arrows. “For firearms, I was coached by Chis Cosgrave [director of photography] and Keith Lukowski [unit production manager] who are both amazing and incredibly knowledgeable.”

Lukowski also trained Sadeghian on the bow and arrow, while knives were handled by fight choreographer Alexander McBryde.

Inspired by actresses such as Linda Hamilton, Sigourney Weaver, Angelina Jolie, Michelle Rodriguez, and Charlize Theron, Sadeghian learned a thing or two during filming about what it takes to be an action hero. “I learned that naps are essential! I had to make sure I was keeping up with my hydration and sleep.”

Besides a few scrapes and bruises, Sadeghian didn’t sustain any injuries making Guns of Eden. 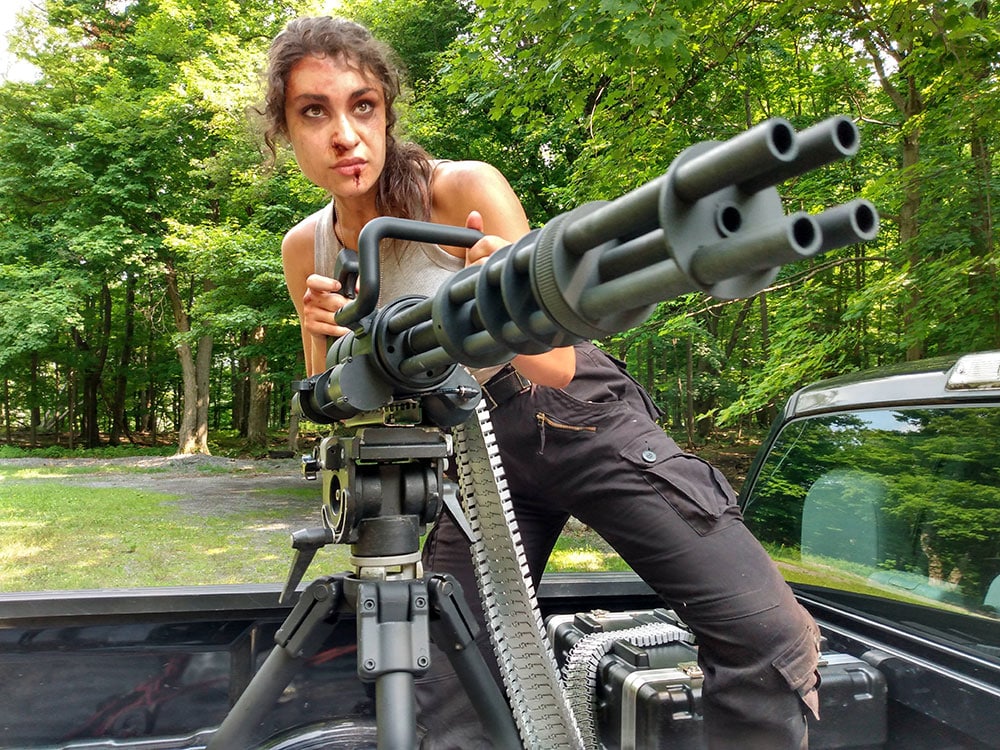 For this part of the character, Sadeghian dug deep from personal experience to properly portray the condition.

“I personally have known people with this condition and experienced it myself,” said Sadeghian. “I think the most tricky part is making sure I’m not playing the condition. Rather I wanted to make sure I was being truthful to the way she would feel/react to each situation while navigating her trauma.”

Her physical and mental dedication and hard work did not go unnoticed on set, Lamberson couldn’t have been more pleased with what he saw in Sadeghian. “Alexandra has been everything we hoped for – talented, professional, cooperative, and gung ho.”

This gung ho attitude was definitely needed considering the exterior terrain of the film’s setting.

The story takes place over the course of a day in the woods outside of Buffalo, New York.

The outdoor setting and natural daylight not only offer the safest setting during the pandemic but also cut down on costs, a vital consideration for a low-budget feature.

Lamberson began scouting locations last October, looking for areas that could offer a different vista with the turn of the camera.

“What I didn’t want was flat woods that all looked the same,” said Lamberson. “We’ve made the effort to find really scenic areas to shoot.”

One such area was a “rock maze” in Little Rock City, a little over an hour outside of Buffalo.

In the film, it’s a great cat-and-mouse location with the action taking place inside trails lined with tall rock formations. Rain during filming added about 6 inches of mud for the cast and crew to run around in, no doubt an obstacle for filming, but an obstacle that very well could enhance the action in the movie.

Enhancing the cast in the supporting role of Frances, a recluse vital to Megan’s survival, is the one and only Lynn Lowry (The Crazies, Shivers). 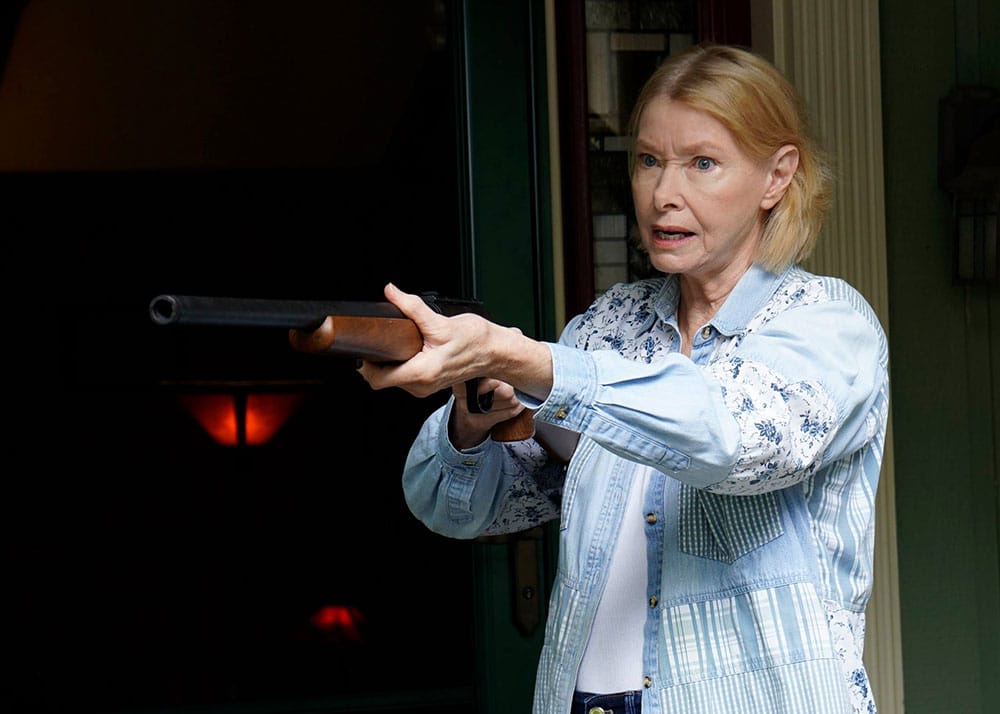 “From the moment we decided to make this movie, Lynn was the only person we wanted for the role of Frances,” said Lamberson.

Lamberson worked with Lowry on Debbie Rochon’s Model Hunger and wanted the chance to direct the icon himself.

“She’s one of the most talented performers I’ve ever worked with,” he said.

In fact, Lamberson wanted Lowry in the film so badly he offered her the role before knowing if he could actually afford to bring her in.

“I really wanted to see her and Alexandra together.”

Guns of Eden has all the makings of an exciting and fun action movie, and Alexandra Faye Sadeghian looks badass, to say the least, in the poster and pictures provided from the set. 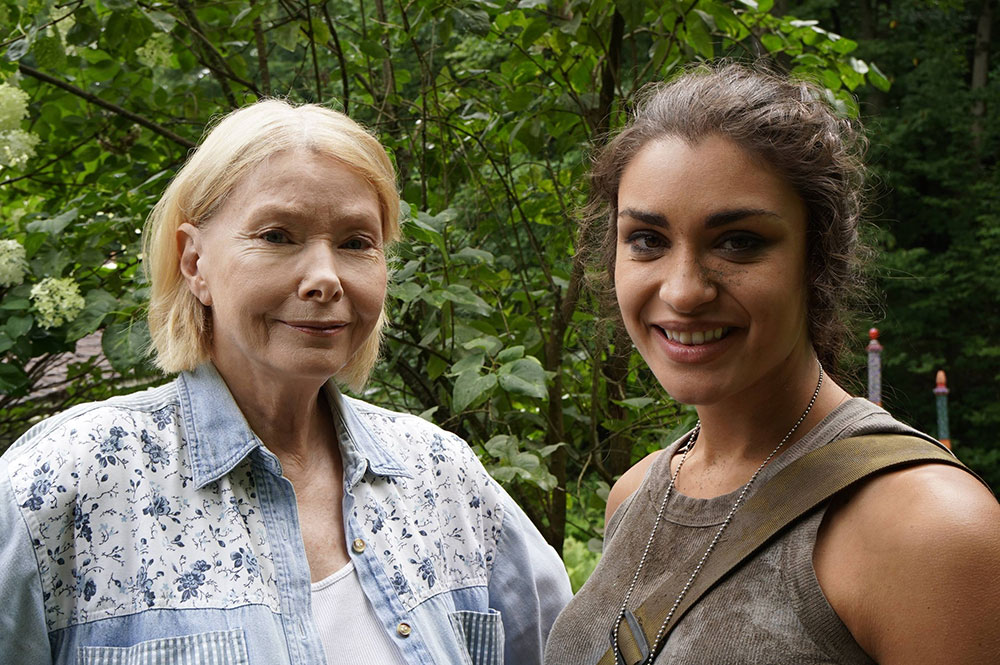 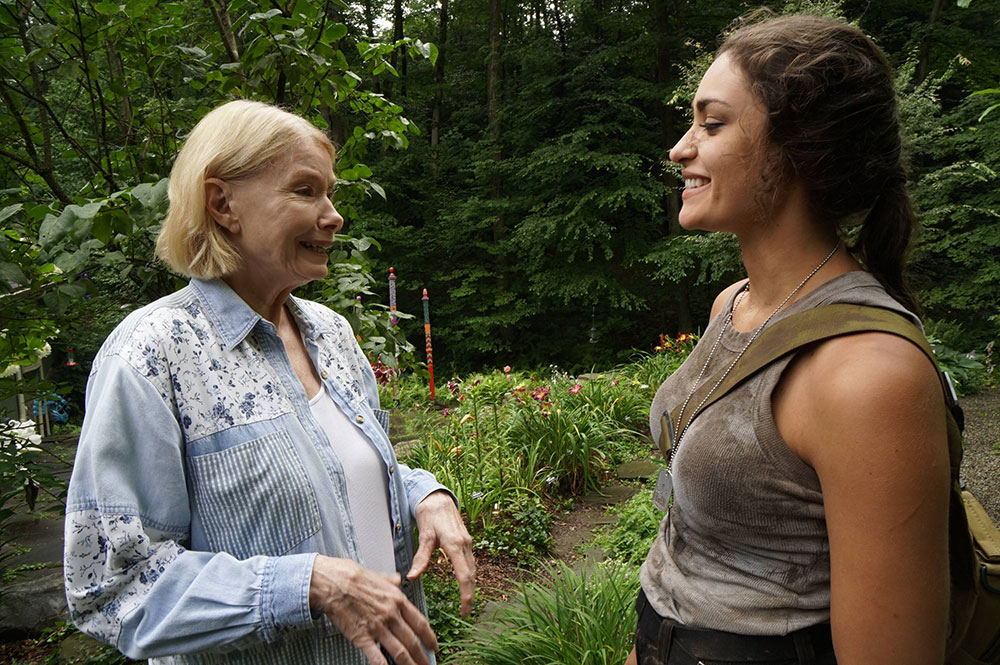 The movie will feature an abundance of cinematic violence and custom gags offering plenty of gore.

One scene has Megan Forest taking out an assault team using a variety of different weapons. “There was some pretty fun stuff in that,” Lamberson said.

Guns of Eden is a true labor of love for Lamberson who has stretched every dollar of the budget to supply a lot of action, over 50 characters, and a helicopter!

“A good screenplay is the foundation of every good movie,” said Lamberson, “and I believe this is the best I’ve written.”

The filmmaker said he would love to see Guns of Eden become the first in a series of films centered around the lead character of Megan Forest. Knowing Lamberson’s passion for the project and seeing Alexandra Faye Sadeghian on that poster, here’s hoping for that as well. 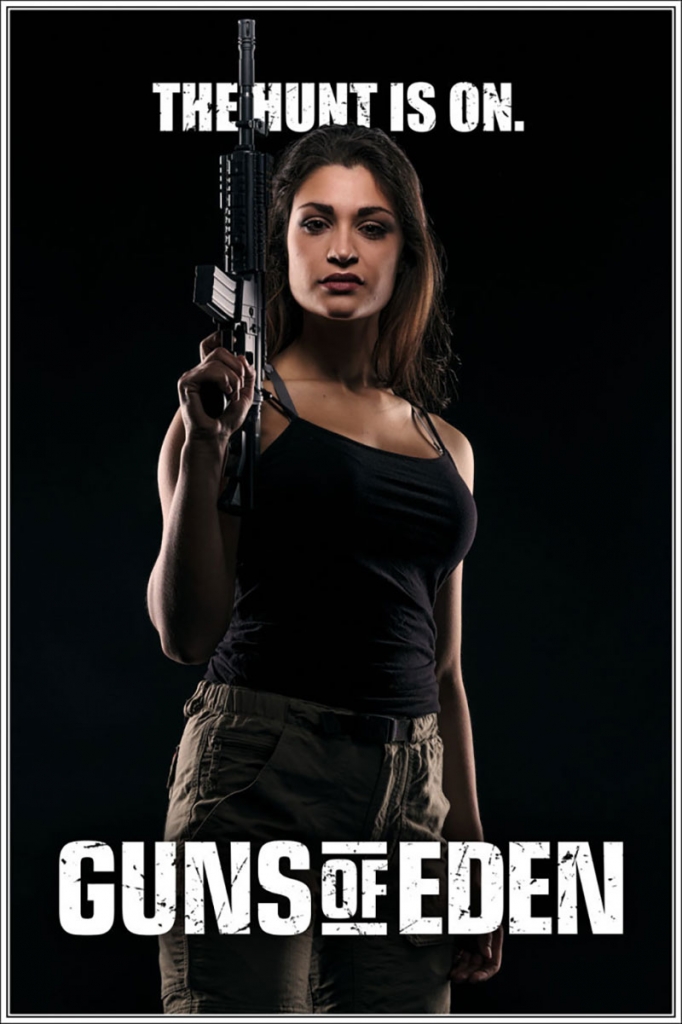