When approaching an offering like “The Show”, an original tale created expressly for film by Alan Moore, one has to avoid rigid expectations.

Widely regarded as the most accomplished comic book writer in the business, even if you don’t know who Mr. Moore is, you are undoubtedly familiar with several of his creations. Watchmen. V for Vendetta. Batman: The Killing Joke. From Hell. These seminal works, and many others, have consistently raised the bar in terms of quality of writing and deftness of plot within the comic book industry.

Moore’s impact in the world of comics/graphic novels cannot be understated. If there were comic book royalty, Alan Moore would reign as king.

This means The Show has quite a bit of built-in expectation.

Notoriously disillusioned by Hollywood’s attempts at adapting his works, many of which are too dense and layered to be properly represented within a film’s time constraints, with The Show, Mr. Moore has instead crafted a sort of anti-Hollywood story. 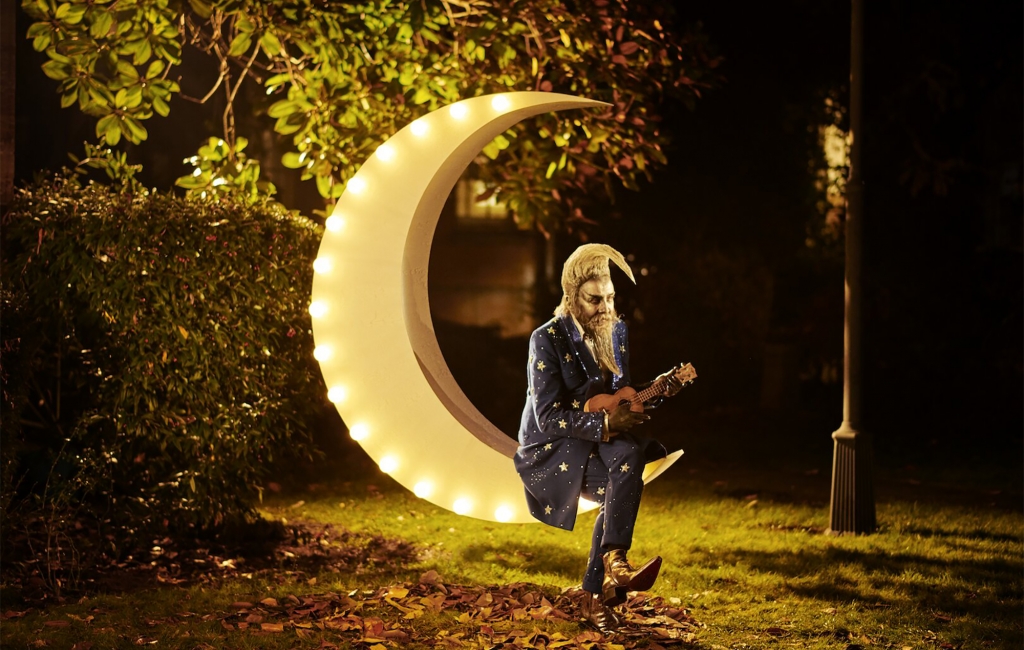 A deliberate deconstruction of the “blockbuster” format, much like how Watchmen deconstructed the superhero mythos. A purposeful straying from the serial book format that has been his trademark for decades.

The result? An engaging albeit bizarre film, one that is oftentimes so concerned with being filled with unique ideas that it occasionally falters in letting those ideas breathe.

Described in the official synopsis as a sort of “mysterious man finds trouble and intrigue within an equally mysterious town” kind of thriller, The Show is certainly those things. And so much more besides.

Featuring an eclectic British ensemble cast, a veritable who’s-who-in-the-small-screen-zoo collection, THE SHOW is not without some serious talent in front of the lens. It’s just a shame that said talent is not always utilized to its fullest extent.

Tom Burke stars as Fletcher Dennis, a self-proclaimed private investigator, who has recently arrived at the small town of Northampton in search of a stolen heirloom. 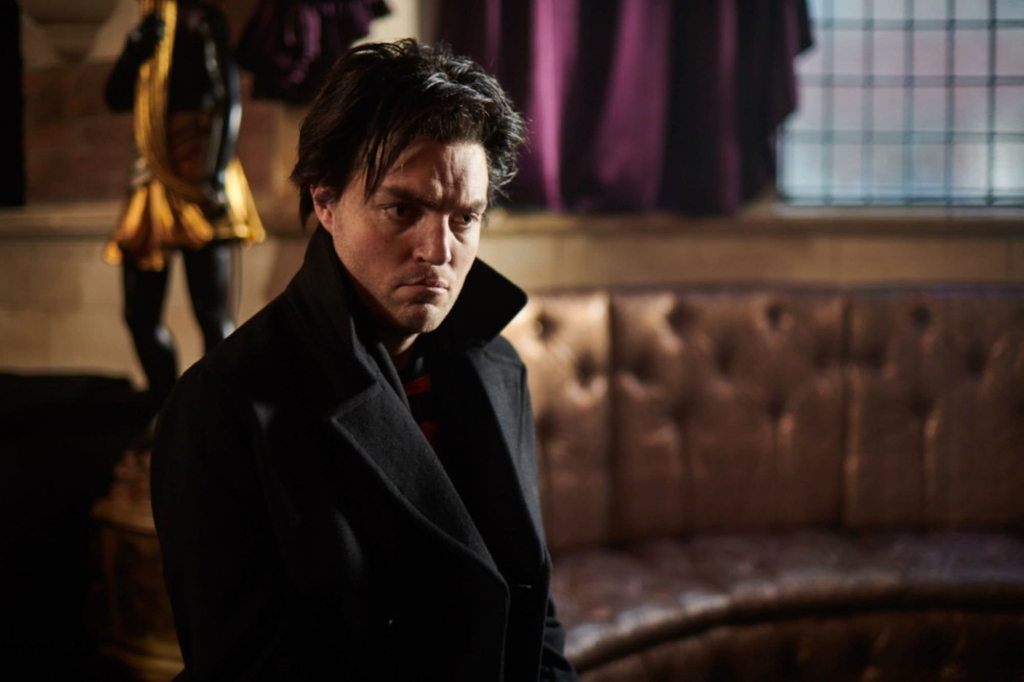 Though Mr. Burke has serious acting chops, his character in The Show is strangely subdued. Especially considering the verve that most of the rest of the cast bring to the table. That’s not to say that his character is boring.

Fletcher Dennis is a man of many talents and has a knack for finding strange things. And Tom Burke manages quite a lot of emotion with his expressive face and eyes. It’s just a shame that he frequently gets outshone by the supporting characters around him. I get that he’s supposed to be a stand-in for the audience. Our proxy for the perplexing shenanigans taking place. But he needed a bit more…spunk.

And the movie does him no favors in the character design department. With his striped red shirt and large dark hair, Fletcher Dennis looks for all the world like Robert Smith from “The Cure” doing his best Where’s Waldo impression.

On the flip side of that coin is Siobhan Hewett, who plays Faith Harrington, a local Northampton woman who gets caught up in Fletcher’s investigation.

Faith is a woman of…interesting sexual kinks, which are played more for laughs than for drama. But that’s just the window dressing for her introduction. There’s much more to the character than her bedroom proclivities. Frequently toeing the line between unhinged and stoically sarcastic, Faith is a whirlwind of a character. And Siobhan Hewett goes all in with the role.

The rest of the supporting cast (including Alan Moore himself!) are uniformly intriguing. 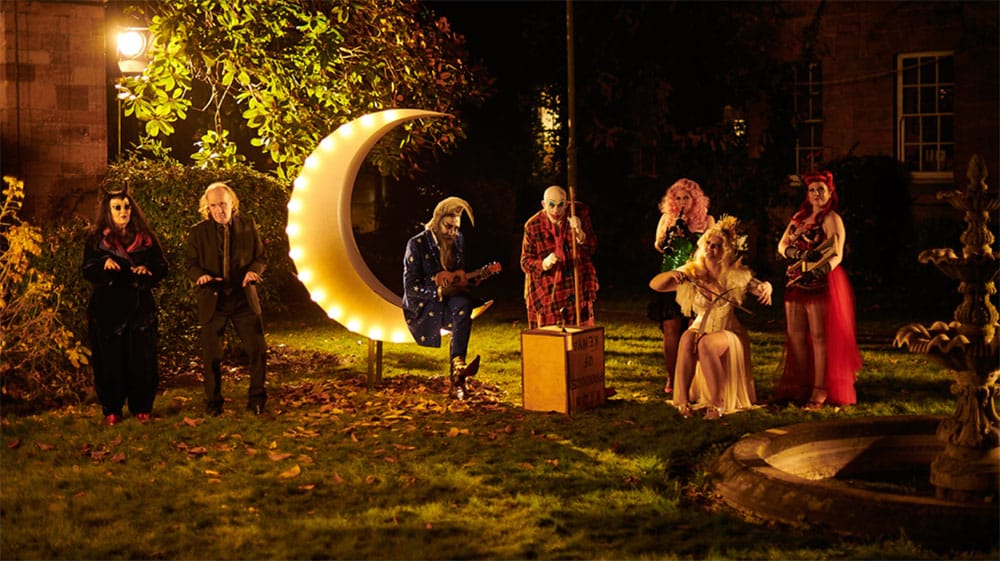 From the hospital porter who may or may not be a vampire, to the local barfly who looks like a cross between Sia and Cruella DeVille, Mr. Moore’s penchant for strange side characters is on full display.

Other honorable mentions include; the socially awkward tour guide that Fletcher rents a room from, the nightclub owner who is the most unreliable of unreliable narrators, a pair of pre-teen detectives who do business in a black & white environment, and Mr. Moore’s character of a gaudily dressed and moon-haired philosophical dream sorcerer, which is literally the only way to describe this character.

The movie itself generally plays out like a detective story. At least in the beginning anyway, with Fletcher meeting new people and uncovering clues in rapid succession. His search for the heirloom, a small golden cross with a red rose, takes him all over the town.

The entire endeavor gives off serious Twin Peaks vibes, which I have to believe was deliberate. Having grown up watching that show when it aired — and being entranced by its colorful cast and refusal to directly answer many questions — I could respect the tone that director Mitch Jenkins was going for with The Show.

There’s much more to the story than the missing heirloom, however. But in the interest of avoiding spoilers, those additional plot points will remain vague. Suffice to say, the movie starts out weird and then only gets stranger as it nears its conclusion.

What will likely be one of the more polarizing aspects of THE SHOW is its overall ambiguity. There’s a surreal feeling to the events at play, and then the weirdness ramps up about halfway through. Click To Tweet

Because the majority of the film’s events transpire with very little explanation, it becomes difficult to get invested in the story. 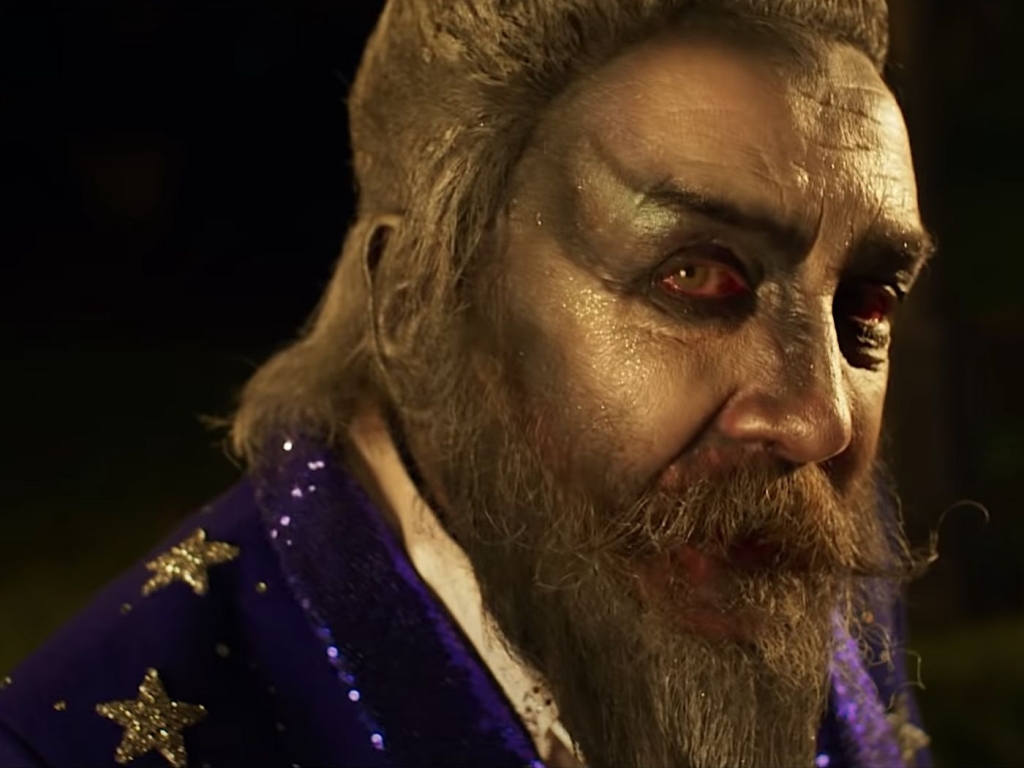 Scene changes can be abrupt, sometimes cutting away to what might be a dream. Or maybe a different reality. Or perhaps something else entirely. As such, it’s not ever truly clear just where this movie is truly taking place.

Is it in the real world, with just an abnormal amount of strangeness occurring? Is it all just the dreams of our protagonists? Are our characters in transition between life and death, with Northampton serving as limbo? Or are they merely pawns in some paranormal/supernatural game? It’s really impossible to say. I have my theories, but like I said…spoilers.

My biggest gripe with the movie is the fact that (likely due to my established bias for Mr. Moore’s works) I truly feel that this story would have been better served as a graphic novel. The way Alan Moore tells a story is very literal. Some of his amazing dialogue and epic themes just don’t translate well to a visual medium.

There was no shortage of big ideas here, and allowing more time for them to be explored would have provided a more meaningful impact. Especially given the eclectic ensemble. Even within the framework of a two-hour film, The Show barely scratches the surface of what makes these characters tick. And why have interesting characters if there will be no exploration of the very thing that makes them interesting in the first place?

Tonally, the movie generally sticks to a laid-back feel. Significant things happen to some of the characters but there’s rarely a sense of tension or dread established. Instead, events just kind of unfold, with the characters feeling like they are in service of the plot, and not the other way around.

As for the technical aspects of The Show, there’s not much to tell. 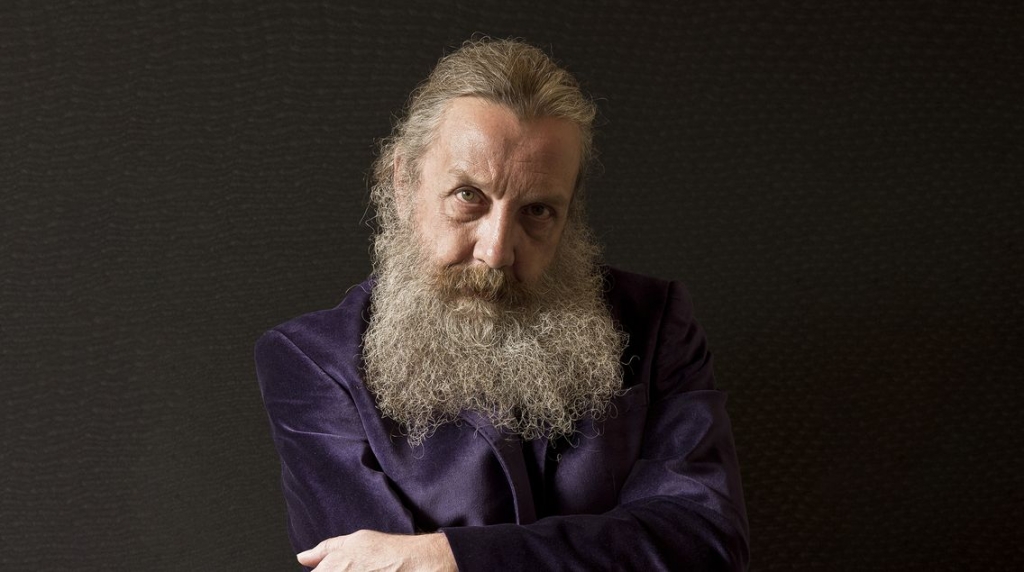 It has the look of a made-for-TV movie, which might have been what they were going for. There are occasional moments of inspired camerawork, namely in off-kilter angles or frame rotations designed to instill a sense of unease. Outside of that, nothing else really stands out.

It was shot, for lack of a better word, with a workmanlike approach. Serviceable if unexciting. The music is much the same. The opening score in particular is filled with whimsy and joy, which is heavily at odds with the strange & dark story being told. Most of the time I rarely noticed the soundtrack, to be honest.

The rest of the audio is a mixed bag. Sound effects were decent, but sometimes the dialogue would get muddled or lost. Given the inherent accents of the actors, I was willing to concede that I wouldn’t catch everything being said. But when the dialogue itself disappears behind the rest of the sounds? That’s a problem.

Nitpicks notwithstanding, I believe the creators made exactly the kind of movie they were going for.

The stripped-down production gives The Show a certain sort of scrappy charm. Like an independent movie…just with a powerhouse of a writer hidden behind the curtain. Alan Moore even has a few lines of dialogue blasting Hollywood films, which is true to form for him.

I may have expected more from a Moore story, but I can’t say that The Show wasn’t entertaining. Confusing at times to be sure. Just not quite as enthralling as I had expected it to be. Still, there’s enough here that more than warrants a watch.

If you’re in the UK, you can catch a live online screening of The Show on September 1st at 6 pm as part of FrightFest’s virtual program (the film made its UK premiere at FrightFest on August 27th). If you missed the special one-night-only theatrical screening in the U.S. on August 26th, never fear. There will be a wider digital streaming release before its release on Altitude.film and other digital platforms starting October 18th.

Parental Guidance
For all the parents out there, here’s what you need to know about The Show. There’s a little bit of violence but it’s nothing extravagant. Not what we are used to from American cinema, that’s for sure. Sexiness is relegated to occasional sideboob and innuendos. Certainly much less than many of Mr. Moore’s other works. The biggest reason to keep kids away from this one would be due to adult language, which is colorful if infrequent.