Criticized for its lack of Lovecraftian horror, “Cthulhu” is a thought-provoking drama that attemps to address the homosexual experience in America. 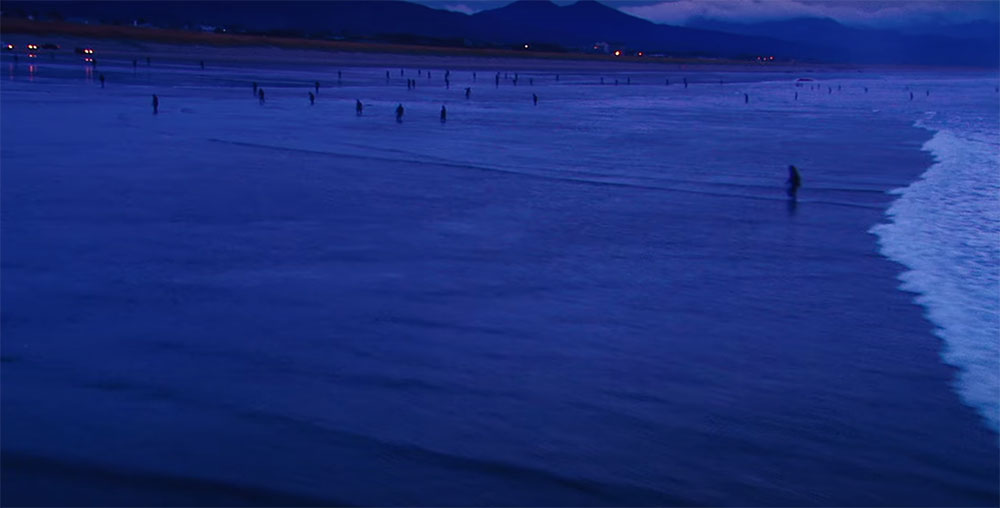 Cthulhu (2007) is an independent film loosely based on H.P. Lovecraft’s “Shadow over Innsmouth”. Directed by Daniel Gildark, and starring Jason Cottle and Dennis Kleinsmith, it centers around a man returning to his childhood home to handle the death of his estranged mother.

And, also, the end of the world.

Cthulhu has not been very well received. It currently sits with only two and a half stars on Amazon, a 4.1 rating on IMDb, and a woeful 28% on Rotten Tomatoes. Countless negative reviews and comments reinforce how terrible this film is. But why all the hate?

To be fair, Cthulhu, doesn’t lean heavily into cosmic horror as one would expect, and is instead more of a drama with light horror elements. 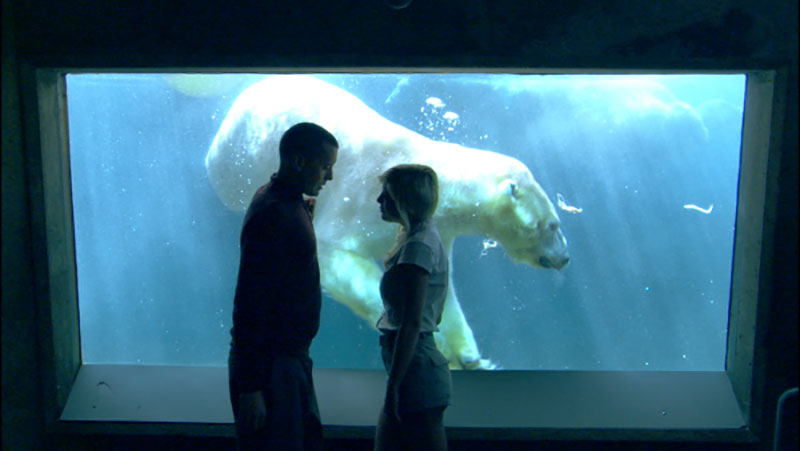 It’s a dramatic story that focuses on serious issues like homosexuality, homophobia, suicide, rape, and self-hate, with “Shadow over Innsmouth” acting as the story’s framework.

Many people familiar with Lovecraft — the foundational, near deified, author responsible for much of what we know as “cosmic horror” — are also now familiar with his stance on certain political issues. To say that Lovecraft was racist is an understatement. The man was a pretty raging Xenophobe in every way, with ethno-nationalist opinions towards Jews and Blacks similar to many eugenists of the late 19th century.

Did these views influence his writings? Yes, in pretty obvious ways.

Have his works transcended these views after his death? Of course. And I think it’s important to separate what people like about his fiction from what they understandably dislike about the man himself.

But why does any of this matter?

Because Cthulhu, as a film, is very obviously attempting to tackle the underlying views of Lovecraft’s writings with a modern spin. 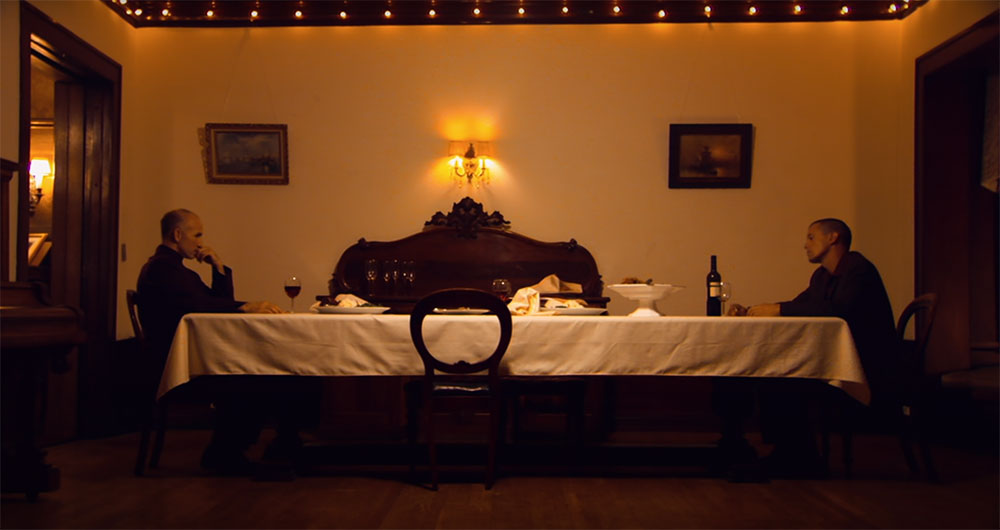 The story is about a gay man returning to his ‘Cthulhu cult leader’ father who hates him because he’s gay — and also because he doesn’t want children.

The writers of this story could have easily just written the main character, Russel (Jason Cottle), as a straight man that doesn’t want kids. The reason why Russel is a gay man is because of the subtext of Lovecraft’s stories. It is a clearly intentional metaphor that people, in reviewing the film, seem to have completely missed.

Many of the reviews imply that this is a bad movie because, “they tried to make a Lovecraft movie and did so badly.” But that misunderstands the filmmaker’s intention.

Yes, if Cthulhu was a movie whose primary goal was to terrify audiences with a modern tale about the horrifying mythical creature, similar to 2020’s Underwater, then it certainly fails by those standards. However, by understanding the true intention of the movie, the standards by which one evaluates the effectiveness of the film also change.

This misunderstanding about the film likely stems from Lovecraft fans not knowing what to expect going in. The film’s title and its marketing campaign mislead audiences, setting them up for disappointment. That’s quite a shame because, once you understand the intended focus of the film, your appreciation for it grows exponentially.

In fact, Cthulhu’s underlying story is concerned, almost exclusively, with both the internal and external struggles of being homosexual in America. 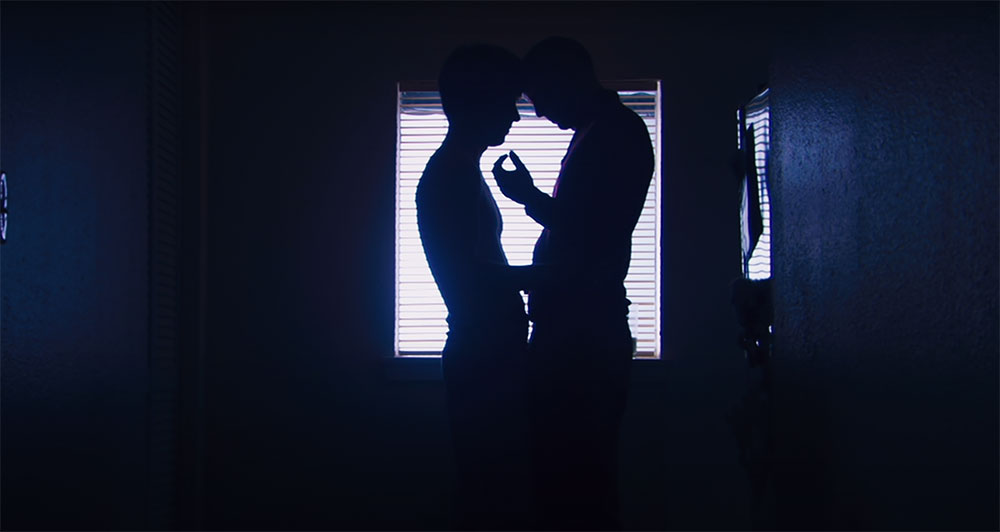 The entire conflict of the plot is centered around Russel and his father, Reverend Marsh (Dennis Kleinsmith), who hates Russel’s homosexuality because Russel doesn’t have any intention of having a child. One scene has our characters sitting together, where Reverend Marsh antagonistically asks Russel, “How’s the gay life?”

Not only is this aspect of the film wrestling with Lovecraft’s own homophobia, but it’s also a commentary on America’s own deep rooted homophobia of the time. It’s important to note that same-sex marriage wouldn’t become federal law in all 50 states until 2015, nearly a full decade after the film’s release. During the 2000s, the idea of same-sex relationships, let alone marriage, was still very much a negative taboo.

An important, yet very quick scene, is when Russel and his childhood friend (and former lover), Mike (Scott Patrick Green), are lying in bed postcoital. Mike comments how the two of them having sex was never ‘a gay thing’.

“It’s not like I can just, you know… change my life and be a gay guy, you know?”

Mike represents a man trapped in his idea of how he needs to be. 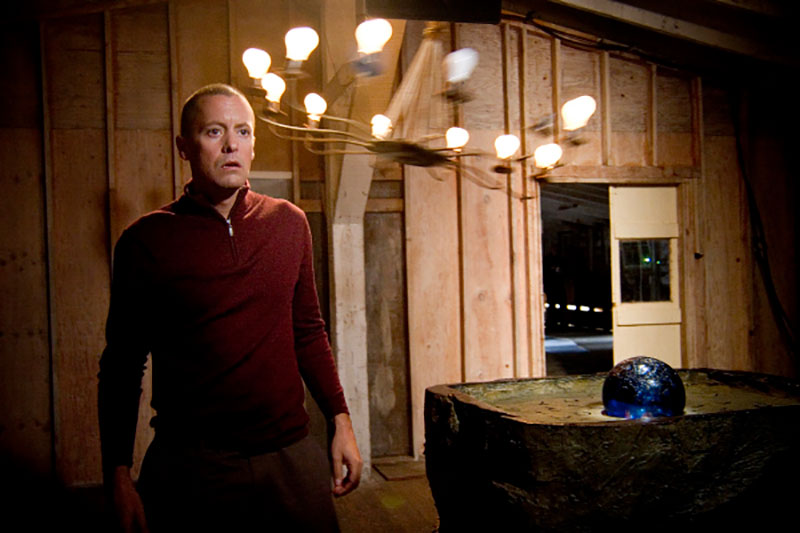 He has a wife and a daughter. To him, he’s doing what is right according to societal standards. While Russel personifies a man open with his sexuality, Mike is in denial about his — fighting an internal battle between heteronormative expectations and his, clearly, strong romantic feelings towards Russel.

Another scene that highlights the intention of this movie comes near the beginning of the film.

Russel, who’s just traveled back to his hometown of Rivermouth, sees Mike for the first time in years. The two chat, but there’s obvious tension there. Mike brings up how they “made a lot of plans together,” and even asks if Russel was “faking it” when he was with his high-school girlfriend. Then, Mike asks about his scars, and we’re shown in a flashback how a teenage Mike walked in on Russel cutting his own wrists.

The film’s mystery about what’s going on in the town (spoiler alert, if you’ve never read Lovecraft, it’s the Deep Ones) is equally, if not less, important to the story as Mike and Russel’s past and present relationship.

These two major plots converge at the end of the film, where the stars have aligned and the Deep Ones are rising up from the sea. 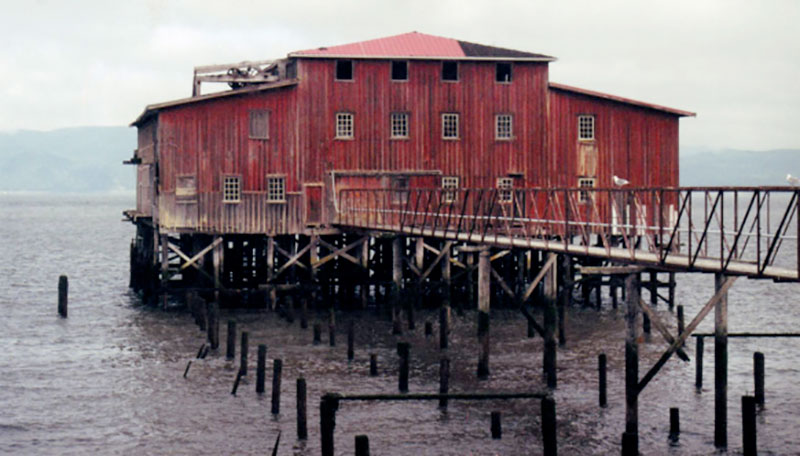 Russel is the heir to all of this, but, before he can take his rightful place in this new world, a sacrifice must be made.

Enter two cultists dragging Mike. Reverend Marsh tells Russel to kill Mike, his best friend and lover, as the ultimate sign of devotion to the Great Old Ones. Russel lifts up the sacrificial object, screams… cut to black.

This is an amazing ending!

Does Russel metaphorically give in and reject his sexuality and himself? Or, does Russel kill his father, refusing power and what everyone tells him is right so he can be happy and, ultimately, free? Personally, I’m of the opinion he did the latter rather than the former, but it’s open to interpretation.

Some negative reviews talk about the lack of technical prowess in this movie, but I have no idea what they’re talking about. 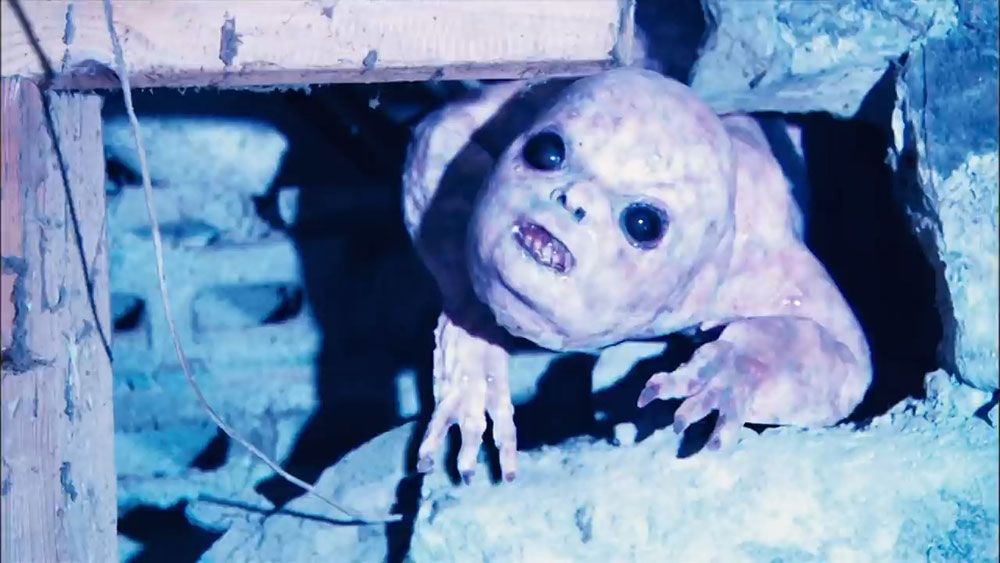 Cthulhu is filled with interesting shots, lighting, and locations. One shot that sticks out in my mind is one from the very end of the film, where we see a shot of the ocean, then we pan and see we’re flying towards the beach — dozens of Deep Ones marching from the sea towards land. I

t’s an expertly shot scene performed by Sean Kirby and team that really impressed me, given the budget for this film.

Cthulhu had an estimated budget of 750,000 dollars. Executive Producer and co-Writer Grant Cogswell sold his home, sunk $140,000 worth of inheritance, and sold everything he owned into getting Cthulhu off the ground. For those unaware, three-quarters of a million is considered ULTRA low budget in the film industry. Most independent features you see in theaters or on Amazon have budgets ranging anywhere near 1.5 million to 10 million, easy.

Cthulhu’s short-comings are, unfortunately, associated with its limited budget. 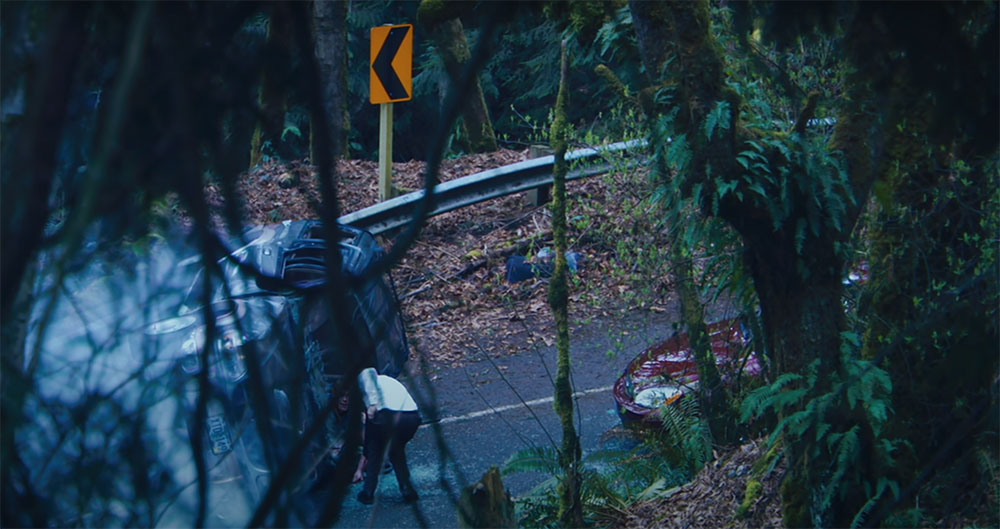 But, before expounding on that, it’s important to appreciate just how efficiently they used that money. Had a few things been different, such  as shooting on film and maybe investing in better lighting and scoring, this movie would look and sound amazing. It already looks and sounds quite good for an ultra-low budget picture. But had the stars aligned and given this team more financial resources? I think Cthulhu’s legacy would’ve been much different.

However, they didn’t have the budget they really needed, and it shows in some places.

Shot on what appears to be a late 2000s digital camera, the picture quality is sometimes lacking. Other glaring signs of budgetary constraints detract a bit from the film, including Russel’s terrible wig worn during the first fifteen minutes of the film, before he shaves it all off.

Unfortunately, I am also unable to finish this review without pointing out that some of the acting also just doesn’t work. 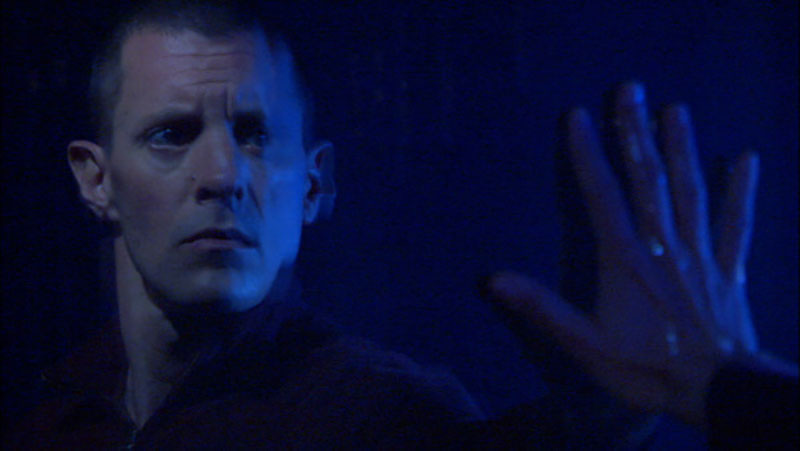 This primarily manifests in the monotone, sometimes lifeless, performance of Mike, played by Scott Patrick Green. Sometimes his delivery works, but other times it’s very flat. Though his acting isn’t by any means terrible, his hit-or-miss delivery effects the overall film, because Mike is one of the most important characters in the movie.

The world is in rough shape, to say the least, and CTHULHU really feels oddly relevant in today’s political climate. It’s definitely a slow burn, and, no, there are no tentacles. But it’s a good dramatic piece worth checking out.

For those interested in something that’s less a horror movie, and more a deep, introspective character study that grapples with themes of loneliness, hate, and the like, then I strongly recommend Cthulhu.