A hated 80’s underdog turned horror cult juggernaut, “The Thing” is a love-letter to cosmic horror and the horror movie equivalent to the Mona Lisa. 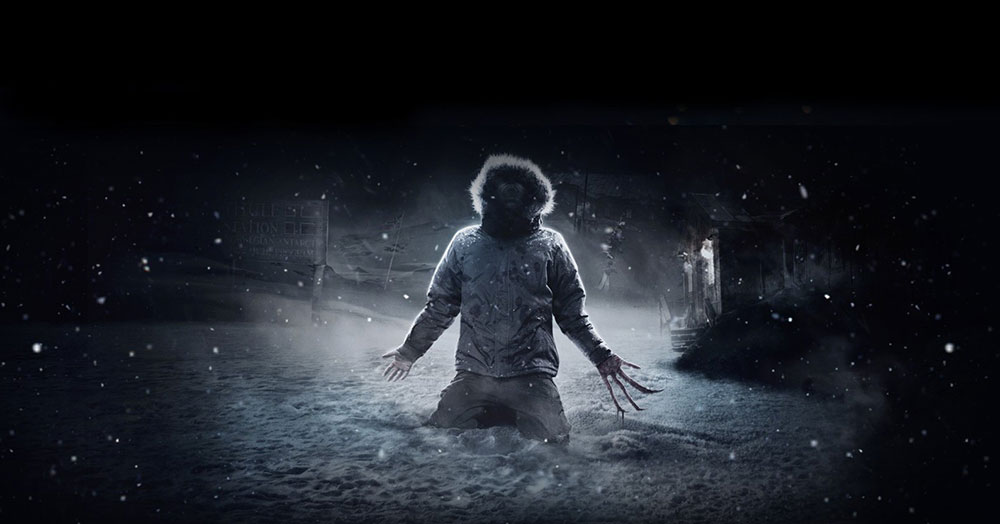 “The red eyes clouded over in a stiffening, jerking travesty of a face. Armlike, leglike members quivered and jerked. The dogs leapt forward, and Barclay yanked back his shovel handled weapon. The thing on the snow did not move as gleaming teeth ripped the dogs open…” – John Campbell, “Who Goes There?”

Let me start with this: it is my opinion that John Carpenter’s The Thing is the closest we’ve come to a perfect horror film. No film will ever truly be perfect, art can never be after all, but The Thing is certainly up there with films that I, personally, consider near perfect. I’m certainly not the only one that thinks this, but, even if you don’t agree with my level of adoration, it’s hard not to call The Thing a good, if not great, flick.

Released in 1982, on the same day as my true favorite movie, Blade Runner (1982), The Thing was met with a disappointing public reaction. In an unfortunate coincidence of cosmic timing, The Thing was released the same year as another alien movie: E.T. (1982).

Spielberg’s Close Encounters of the Third Kind (1977) and E.T. had shown movie going audiences a more compassionate side to whatever could be lurking up there. These films, and other more positive films about beings from beyond like Cocoon (1985), were well received by audiences. Some film historians believe the public were receptive to these uplifting, optimistic films due to the financial recessions of the mid-to-late 70s and the early-to-mid 80s.

On the flip side, it’s theorized by some that movie going audiences, including horror fans, were not prepared for the level of horror seen in The Thing.

Neither An American Werewolf in London (1981), the previous big horror effects movie, nor Alien (1979), the previous big alien horror movie, could compare to the intense, often violently grotesque, images presented right on screen. To say audiences weren’t prepared is putting it mildly. Critical consensus back then gives us insight, where critics were immediately calling out how horribly disgusting and vile the film was.

Of course, two years later, Wes Craven’s A Nightmare on Elm Street (1984) would push boundaries in effects and gore to become a smash hit! The Fly (1986), an equally disgusting, stomach wrenching sci-fi horror film, was critically acclaimed, winning an Academy Award for its makeup effects. This just goes to show that when people say The Thing was ahead of its time, they’re talking literally as well as figuratively.

In short, The Thing didn’t do too well in the summer of ‘82.

That summer wasn’t anyone’s but E.T.! Blade Runner, 20th Century Fox’s most expensive film at that point (about thirty million dollars), one of AFI’s “Top 100 Movies of All Time” and second at the box office upon release was considered a dismal failure because of E.T.’s mass earnings.

E.T. dominated the box office not just that summer, but that year with over three-hundred million dollars in total yearly earnings. Second place in 1982 went to Tootsie, with 177 million, just over half of E.T.’s earnings. Blade Runner, mentioned before and released the same day as The Thing, probably just broke even with twenty-seven million. The Thing only barely made over nineteen million.

It was both a complete flop, and totally panned, and Carpenter knew it.

In 2008, when asked at a panel about how he handled failure, Carpenter said:

“I take every failure hard. The one I took the hardest was THE THING. My career would have been different if that had been a big hit. The movie was hated. Even by science-fiction fans. They thought that I had betrayed some kind of trust, and the piling on was insane. Even the original movie’s director, Christian Nyby, was dissing me.”

However, what Carpenter didn’t know in 1982 was that while The Thing wouldn’t get its fair shake then, it would later become a cultural hit thanks to the VHS industry.

Today, The Thing is the king.

As of October 1st of this year, Time-Out interviewed critics, directors, writers, authors, and actors about the best horror movies ever.

The Thing is in the top ten. Number six, to be exact.

Critics praise it, directors are inspired by it, entire Facebook groups and Reddit subs are devoted to it, researchers at the Amundsen–Scott South Pole Station in Antarctica watch it every year, and Empire has it listed in their “Top 500 Greatest Movies of All Time” list. It’s a film that inspired a whole generation of filmmakers. Even Quentin Tarantino credits The Thing as the direct inspiration for The Hateful Eight! 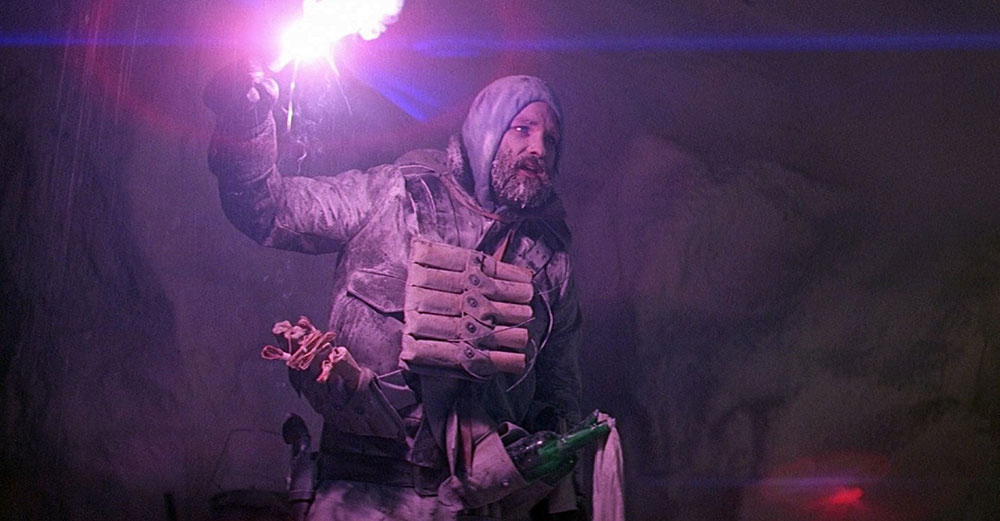 What has made it so good?

Its story is relatively simple, like most good ones: a group of Antarctic scientists are trapped with an alien being that can infect them and assume their shape. It is a classic paranoia set-up, and it’s a setup that few actually credit to John Campbell, the author of “Who Goes There?” which is the story The Thing is adapting.

At the film’s center is MacReady, played by American tough-man Kurt Russell, who needs to figure out who is the Thing, and how he and his colleagues can survive. Simple, but not perfect. Critics in the 80s were quick to point out the characters’ lack of depth. They said that, while its story is one that could shine a light on the characters, the limelight is constantly on the effects. It’s a point many fans of The Thing outright dismiss, but not me.

If Carpenter had given us another thirty minutes, making the movie just under two-and-a-half hours, we could have had scenes of the characters grappling more with the paranoia, with the fear, the dread. Instead we get the simmering of tension between characters, a little development from MacReady, and a whole lot of monster.

There’s twelve characters, all usually in one location, so it’s understandable why we don’t get a lot of development. But if Predator can do it, so could The Thing, which, ultimately, is disappointing.

So, story: good. Characters: okay, not perfect. Then what about this film is so fantastic?

I’ll tell you: everything else. The amount of work put into this film is not lost on the viewer. Yes, Wilfred Brimley was right when he said, “This movie is about rubber and steam.” My response is “…So?”

Everyone notes the effects when they talk about The Thing. They’re great, they look awesome, and they’re proof that good, tactile, and detailed practical effects will always come out on top between it and CGI. Yes, it’s a modern-day John Henry-esque tale. What people don’t talk about, however, is the cinematography.

Dean Cundey and his camera/electric team did a phenomenal job with their use of camera placement and lighting. Their use of anamorphic lenses to get that certain lens flair, placement of color in a scene or in their lighting to set a tone and knowing when and where to apply shadow really makes the film. It’s obvious even in the framing — knowing what to shoot and how to get just enough of it — that lots of thought went into how they wanted to shoot this. 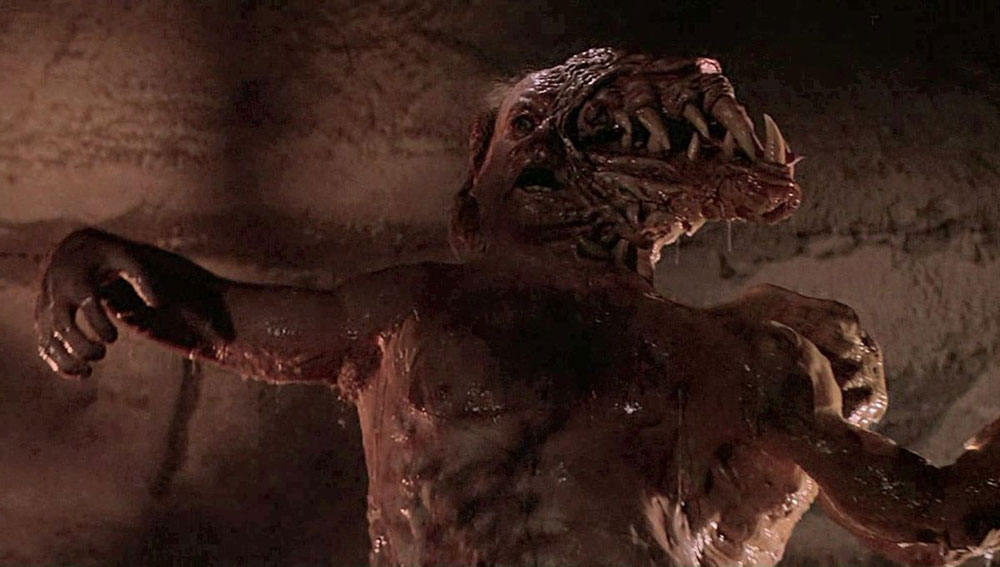 Everyone watches a movie, but, with The Thing, I implore you to watch it like it’s a moving painting.

It makes you really appreciate the amount of time, thought, and effort the team put into it.

Back to what makes The Thing so fantastic: everything worked together, piece by piece, to craft a visually striking, grotesque work of art. The lighting casting just the right amount of shadow over the effects. The sublime editing that guides you through the story, never making it feel too slow or too fast. The music that’s timed just right and flows with the motion of the camera. The art design and set work coupled with a legitimately real location.

THE THING is like several different organisms, each of varying size and strength, working together to make one complete, near perfect organism like The Thing itself. Everything works together to elevate even the okay parts up two or three levels higher.

It’s no surprise then that post-80’s sci-fi horror tried to emulate the skin crawling imagery and mind-boggling effects of masters like Carpenter.

It’s plain to see the influence The Thing had, even back then, when you watch films made by Craven, Gordon, Barker, and Cronenberg. I could close my eyes, point at my movie collection behind me, and no doubt find a horror film that takes elements or direct inspiration from The Thing.

Films with a connection like that are not hard to find, but none of them earn the right of ‘spiritual successor’. Except for one. It’s a film with a production history comparable to a Shakespeare drama. It’s also the only film has a real, tangible connection to The Thing besides its prequel. An actual right, whether earned or not, to the title of spiritual successor to one of the greatest horror films of the 20th century. That film is Harbinger Down.

Catch that film’s review in Part Two of this article.