The sweet taste of nostalgia is back, but why is it a big deal, and what gives these beloved monster cereals such lasting appeal? Each year, the start of the Halloween season doesn’t blow in with the autumnal equinox. It isn’t kick-started in late July when World Market, Michael’s, Marshall’s, and various other big box stores begin trickling earth-toned décor, artificial pumpkins, and “Harvest” porch signs into their inventory.

No, it doesn’t kick off when Target and Wal-Mart finally edge all that pesky back-to-school merchandise back into the stock room to make way for their glittery spooky-cute merchandise that, if we are being honest, most horror fans use as interior furnishes all year round.

And no, it doesn’t arrive with the construction of your local haunted house or the opening of that Spirit Halloween that cropped up in that shuddered Bed, Bath and Beyond to hock masks and costumes at inflated prices.

And I’ll stop you if you’re next argument is with the arrival of pumpkin patches, which do add to the crisp flavor of the season and allow your sister and her friends to take the perfectly filtered selfie equipped with pumpkin spice lattes, baggy flannel shirts, a Carhartt stocking cap, and the Instagram caption of #livelaughlove followed by the falling leaves emoji.

And don’t even think of Bath and Body Works slinging the latest variation of a vanilla pumpkin candle!

You’re closer if you say the dotted grocery store shelves housing plastic pumpkin faces waiting to be filled up with candy by little Johnny and Susie, eager to jump into their respective Frozen or Marvel costume and dash wildly from house to house for a sugary treat sure to keep mom and dad awake into the wee hours of the morning only to document their torment with a new Facebook post that is over the whole “adulting” thing.

The Halloween season officially arrives when stores begin making room on their shelves for a trio of white, 8”x 10” boxes (or brown, blue, and red). 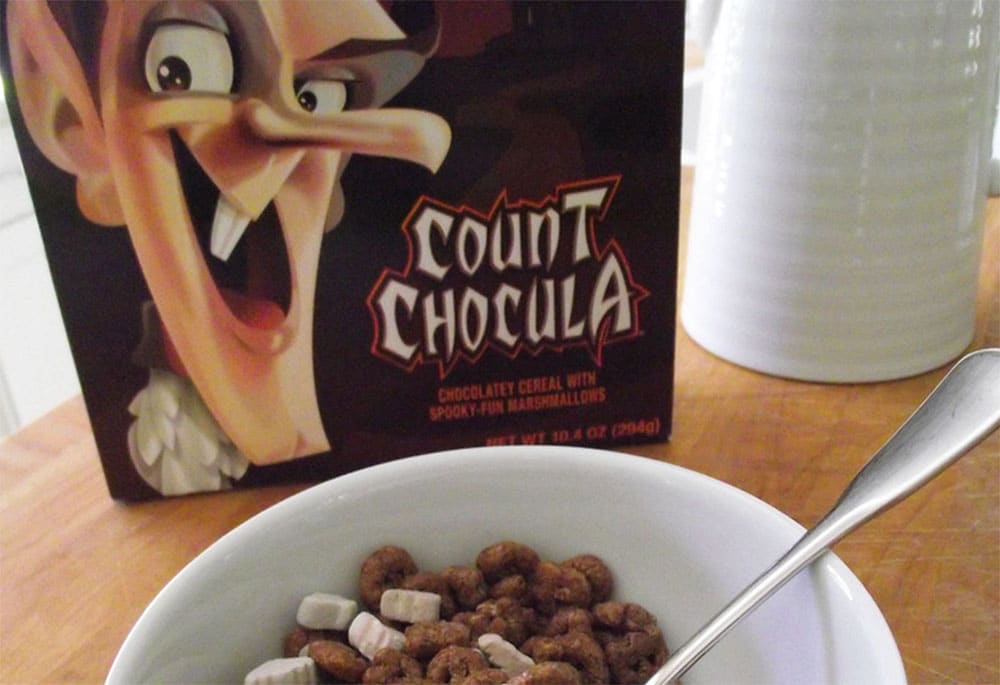 Nestled inside said boxes is a large nigh-transparent bag of sweet gold mixed with delectable marshmallows in the mutated shapes of bats and ghosts.

On the exterior of these boxes resides three cartoon creations that slap a big sugar-high smile right across the face of every man, woman, and child that dares ogle them in all their splendor. I’m talking, of course, about the triumphant seasonal arrival of General Mills’ monster cereals – Count Chocula, Franken Berry, and Boo Berry!

Since 1971, General Mills has been capturing the imagination of monster kids – and, well, kids everywhere, really – with their adorable line of monster cereals that have always managed to stand out among the breakfast mascot community.

The world first met Count Chocula and Franken Berry in early ’71, when the duo took to their commercials to verbally duke out who hocked that tastiest bowl in all of Transylvania.

In 1973, Boo Berry began haunting the gang, only to be followed by that uber-cool werewolf, Fruit Brute, in 1974 and Day-Glo crypt-kicker Yummy Mummy in 1988.

A clear riff on the Universal Studios monster line – sans Boo Berry, who is a ghost and speaks in an eerie Peter Lorre inflection – the monster cereal brand has always danced to a different, er, Mash than the other cereals.

General Mills decided in 2010 to only release the brand around Halloween, originally available year-round, making them a coveted delicacy for those who go all-in on #spookyszn. 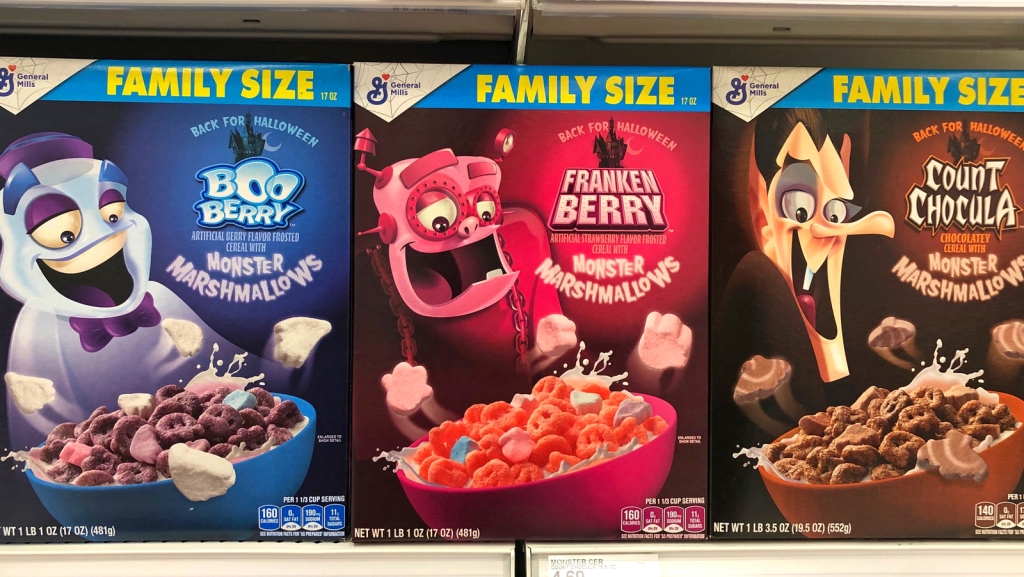 I won’t bore you with the long, drawn-out history of the monster cereal line, as you can read that on Wikipedia or countless other horror websites.

I will admit that their presence within the breakfast cereal universe is certainly an interesting dive over a big bowl of deliciousness. But I’m more interested in exploring why these little guys seem to warm the hearts of the general populace, whether you indulge in a late-night nibble or side with your Saturday morning cartoons. What makes them so irresistible?!

Given these guys are inspired by the popular monsters made famous by Bela Lugosi, Boris Karloff, and Lon Chaney Jr., the cereal monsters were destined to have a built-in fanbase of monster kids who were already eager to pour over Aurora model kits, traipse around the house in a Ben Cooper Wolf-Man costume, and share bath time with their Creature from the Black Lagoon Soaky.

It added another layer of “monster” to their lives as they flipped through the latest Famous Monsters of Filmland and basked in the thrilling adventures of Scooby-Doo or rocked with the Groovie Goolies.

Count, Frank, and Boo – and later Fruit and Yummy – felt like the cool kids of the breakfast club. They were and still are the rock n’ roll rebels.

Those who could enjoy the monsters upon their arrival – and endured the Franken-stool scandal of 1972, which turned your tyke’s poo from a healthy brown to a freaky pink – look back fondly on these dysfunctional monstrosities as they bopped around their endlessly entertaining commercials.

They were scared of their own shadows, yet they harbored a fierce rivalry that even the sports world couldn’t wrap its heads around.

More importantly, much like Lugosi, Karloff, and Chaney Jr., their initial appearance is practically immortal! 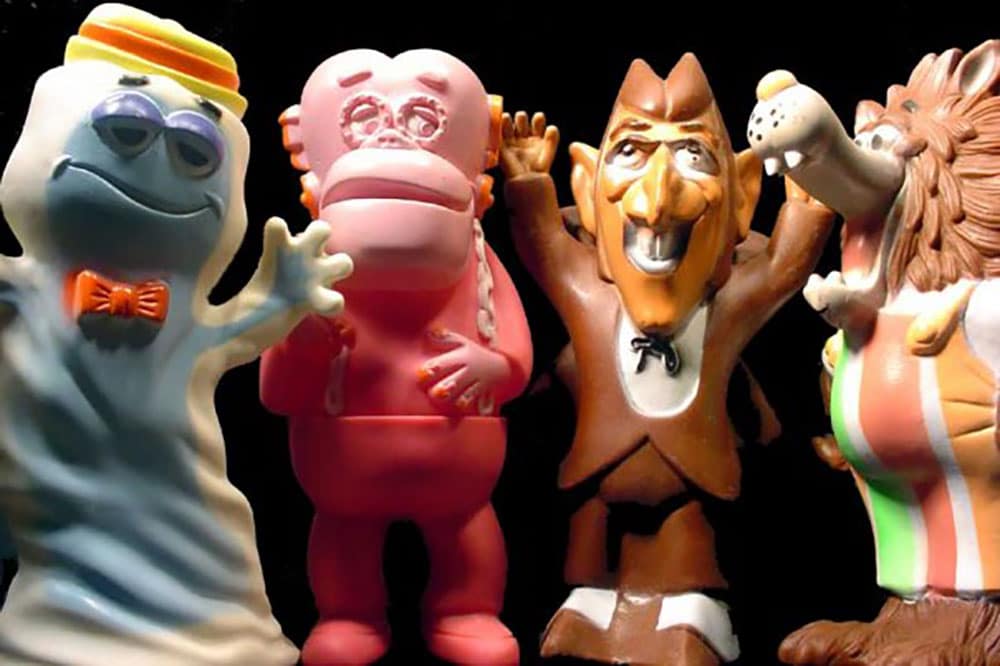 Over the years, General Mills has tampered with their hand-drawn manifestations, which were conceived brilliantly out of the gate only to be relegated to mundanity by a computerized redesign that was as lifeless as Dracula in the daytime!

For years, some of the magic was dead and buried, yet in 2013, General Mills decided to partner with Target and bring the little guys back in their retro glory with their original box designs.

In the wake of their yesteryear revival, these guys have almost become like rock stars. Hell, they were even given a chance to cover the “Monster Mash” in 2021 for their 50th anniversary, which arrived with a VH1 Behind the Music-styled documentary. Now, is that cool or what?!

Simply put, these guys are the life of the Halloween party. Pure and simple.

They’ve had some of the most sought-after tie-in toys ranging from a vibrantly yellow musical record to foam figures that this monster cereal fan would love to get his claws on. They’ve also been acknowledged by several toys companies that have dared to celebrate their glory, from Funko’s seriously awesome bobblehead line to 2021’s Jada line of intricate action figures of Franken Berry and Count Chocula, who look like they danced right out of their respective commercials to continue bickering on your toy shelf.

Even Fright-Rags have nudged their way into your complete breakfast with two lines of retro t-shirt designs that are begging for a third wave.

Much like Lugosi’s Dracula and Karloff’s Frankenstein, the monster cereal is basically the physical manifestation of All Hallow’s Eve. 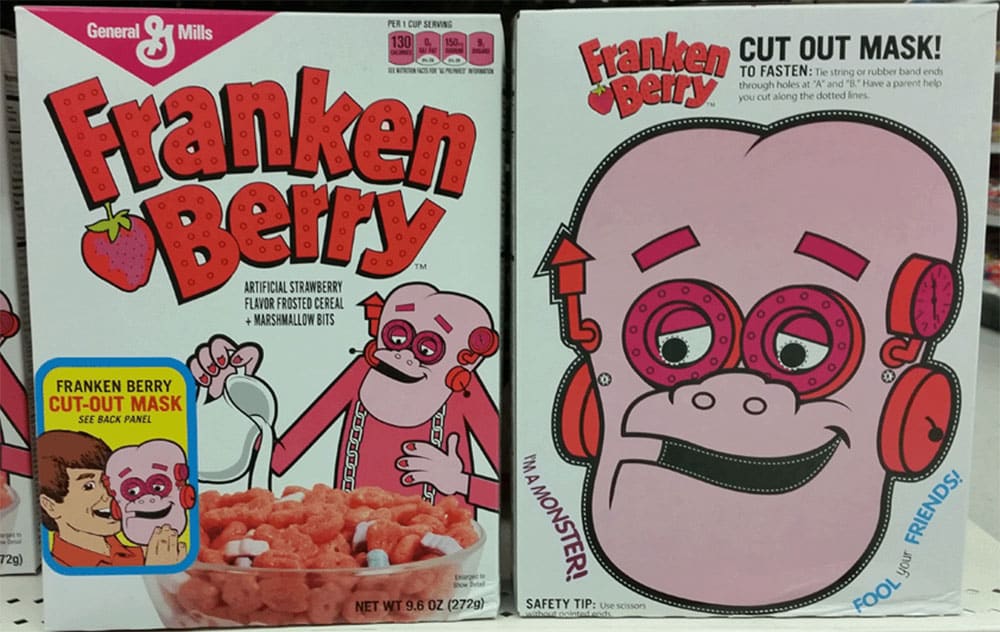 It just goes together like peanut butter and jelly.

Suppose the Universal Studios monsters prowling misty graveyards, crumbling castles, and Victorian villages don’t smack you right across the mug with a pumpkin-spiced glove. In that case, I don’t know what does. It’s the same with General Mills’ house of horrors, which is an edible celebration as kitschy as the Halloween novelty songs of the ‘50s and ‘60s or that glowing blow-mold your parents set out every year.

It all works in tandem, allowing your spirit to shuffle through time, much like the ghosts that wander on October 31st.

Let’s be honest, fall is a season that runs on a full tank of nostalgia. It’s impossible not to reminisce about younger you trying to find the perfect Halloween costume, plunking down with friends or family to carve a face into the gnarled pumpkin you hunted down at the local grocery store, or the giddy excitement you felt on Halloween night as you and friends darted from house-to-house under the bed sheet or layers of zombie make-up in the hopes of snagging a sugary snack.

It just takes you back to a simpler time, something we should treasure as we slug off to our 9-to-5 with a Yeti of extra-strength coffee to shake us awake for the morning commute.

I adore Halloween because I am first and foremost a monster fanatic, but it also makes me feel like a kid again for 31 days.

And I firmly believe when people see those perfectly retro General Mills boxes that wave from their seasonal endcaps, it’s your childhood waving back at you. 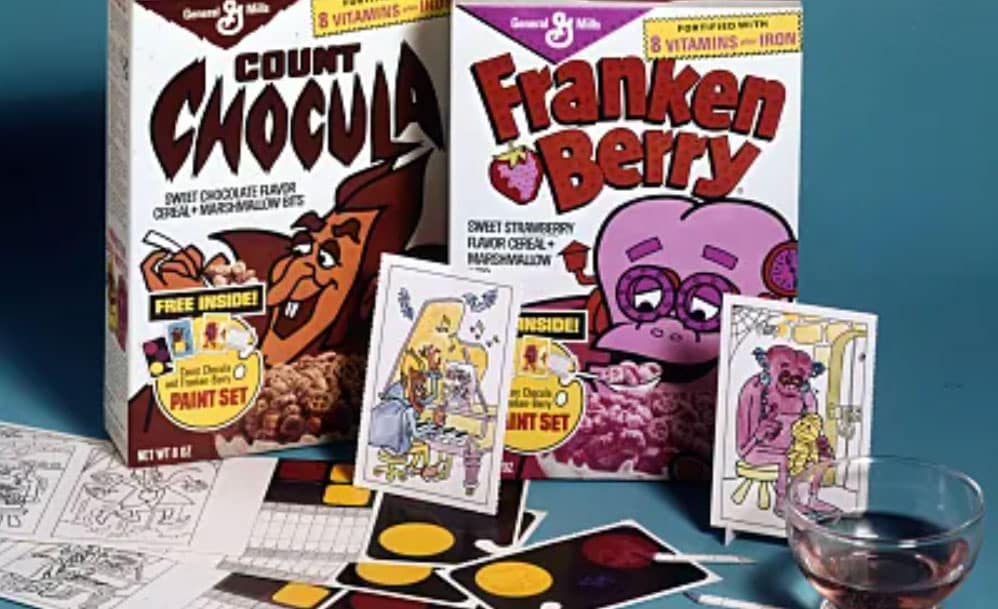