An ultra-cool, compelling, twisty thriller, “Follow Her” delivers on every front — and ends up being one of the year’s biggest surprises. 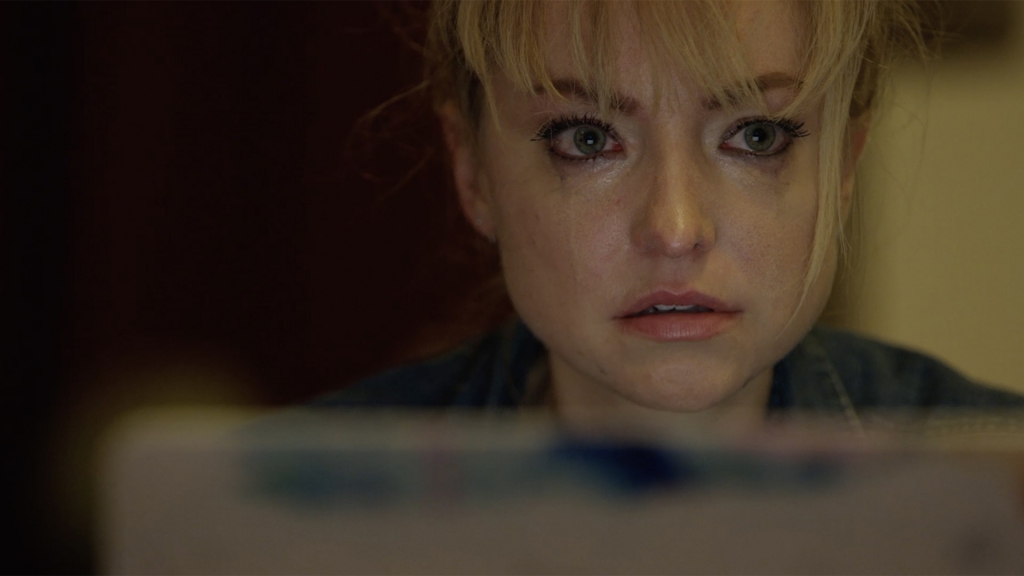 It’s 2022. I am pushing 50. 50 is the new 40, so I don’t really feel that old, but I still feel like I’m totally living in the future. Even lower-budget films are using technology that would have been impossible 30 years ago.

It’s a slick thriller that comes out swinging with several cool graphics to accentuate the lifestyle of a modern young “influencer” as she slinks around the city hiring herself out to men with various kinky fetishes, a vocation she chronicles via social media.

Uh, mad props, as the kids say, to the digital effects department.

We then follow miss Jess (Dani Barker, ABCs of Death 2.5, The Scarehouse) as she seeks to rise through the ranks of internet notoriety and is finally rewarded for her efforts with a viral video and a job offer she can’t refuse, especially now that Daddy (Mark Moses, Fear, Inc.) has unexpectedly pulled the financial rug out from under her feet.

Should she take the sketchy job that her bestie pulled out of accompanying her to at the last minute? 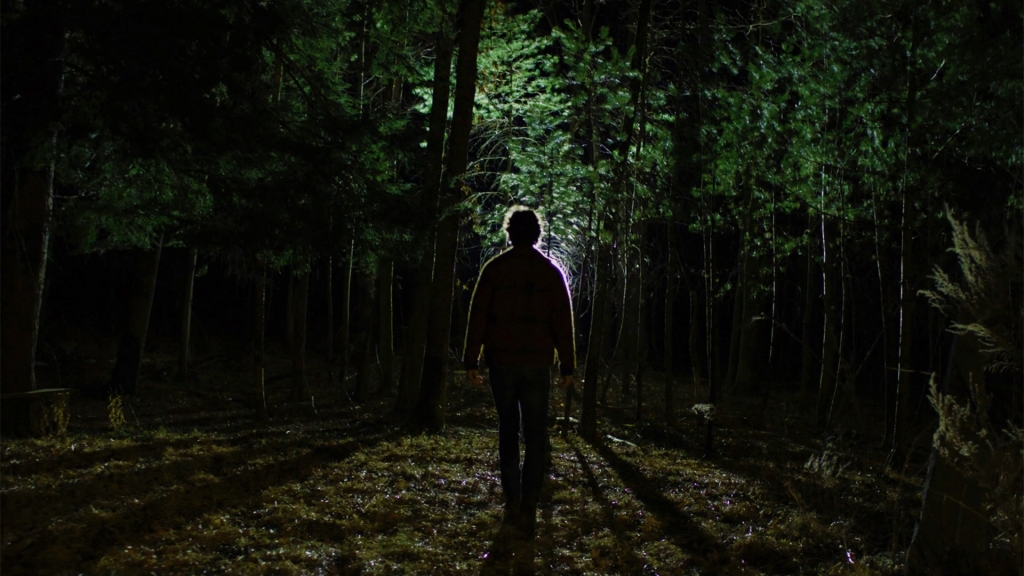 Then it’s a long hike through the woods to – is that a barn? Yes, it’s a repurposed barn. No red flags here, and, wouldn’t you know it, “No Signal” either.

Not to worry, though; it’s just a writing gig, and Jess has her arsenal of tiny, hidden cameras to protect her.

And now, after a lot of setup and flirtation, the mysterious Mr. Tom Brady (no relation) has handed her the script they are to work on together, and it’s…a retelling of her exact movements throughout the day, including obvious knowledge of her actual vocation and name which she never disclosed. Rut roh, Raggy.

It’s all good. Mr. Brady (Luke Cook, Chilling Adventures of Sabrina) is simply very dedicated to his craft, and he is paying her after all.

Unexpectedly cranking up some creepy music and shutting off the lights is just part of that dedication, though Jess isn’t really taking it very well. But as the evening winds down and Jess is about to leave, the movie hits the halfway mark and totally kicks it up a notch.

Holy fuck: There’s someone else in the house.

As the film gets up to some next-level shit, there are suddenly jump scares that I was not expecting.

There’s actually a lot I wasn’t expecting, including how good this movie is. 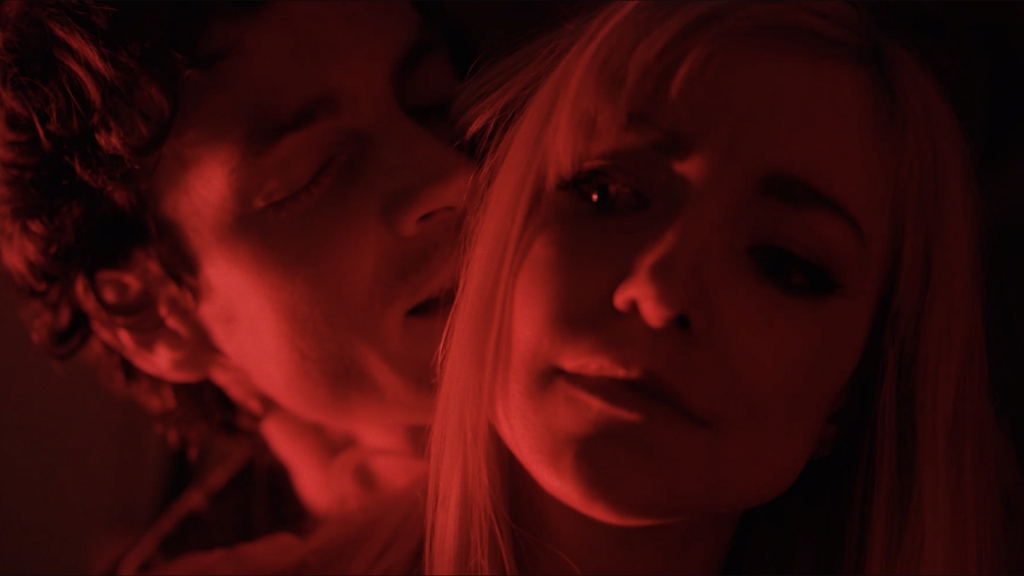 We’re not talking about some mediocre drama here.

Follow Her has an excellent script (by none other than the lead actress herself), top-notch score (Alexander Arntzen, 2022’s breakout hit Watcher), cool production design (Noa Rachel Bricklin, Let Me Play), and a strong cast.

For a brief moment, our heroine seems to have the upper hand, even managing to tie up our mysterious Mr. Brady, but things are definitely as they seem — which is that things are not as they seem.

Just know that if I say “holy shit” and “holy fuck” in the same review, it’s a good thing. I mean, not for my poor, departed grandma, who is probably blanching in heaven, but for the movie in question.

The whole movie turns on itself not once but twice, at least. We get multiple “aha!” moments, and it nearly goes full “meta” on us, as the kids say (they do say that, right?).

Add to the whole delicious affair one of the most creative endings for a thriller I’ve seen this year.

I’m putting Follow Her right up there with Orphan: First Kill for the best of the year so far. 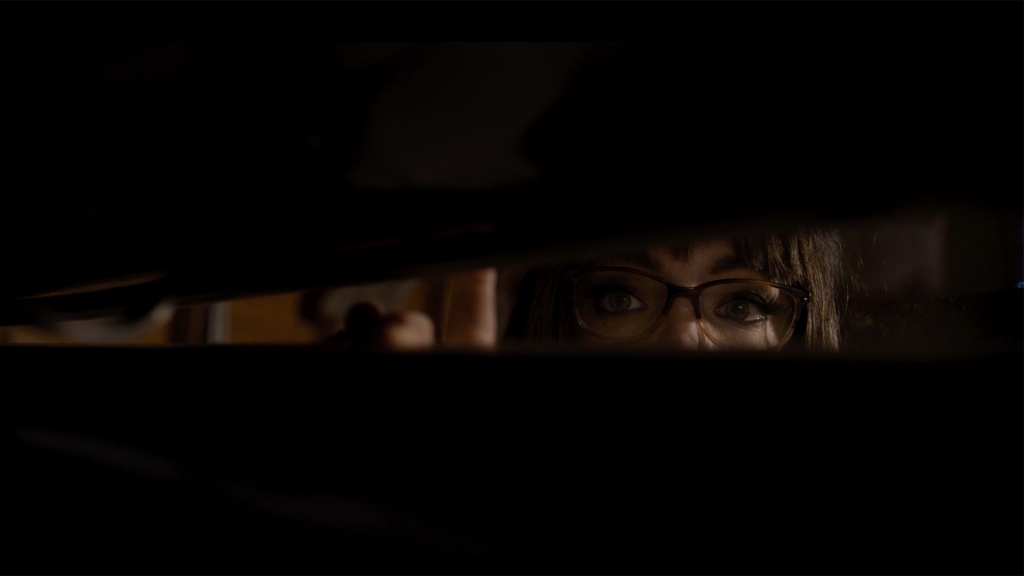 As good as the GenreBlast Film Festival is, it will be difficult for any of the fest’s other offerings to top Follow Her.

But if the other films are only half as good, I’m happy to report that’s a hell of a positive outlook for the state of genre films in general.

Congratulations to the whole Follow Her team, including the awesome post-production crew and all the artists who contributed music to the film.

I always say that sequels suck, which they almost always do, but I would not mind seeing one for this film — maybe Follow Them? Regardless, follow this film! And don’t miss it when you have a chance to see it for yourself.

Trust me, you’re in for a treat.