Some movies are surprising, and some deftly defy all expectations to make us feel silly for judging; the excellent “Stag” does that and more. While watching all the trailers for this year’s featured films in preparation for GenreBlast, I’ll admit I was least excited about Stag (2023), written and directed by Alexandra Spieth. The concept presented in the trailer didn’t seem all that interesting, and I wasn’t looking forward to it. I know, I know. Debbie Downer. Sorry.

For one thing, I’m a dude, and it did not appear from the trailer that there were any fellow wienerschnitzellers in the proceedings apart from one stereotypical redneck, which is fine. It’s fine. I just wasn’t sure if I was the target audience or not.

However, halfway through the movie, I realized I was enjoying the hell out of myself, target or not.

I mean, how could I not love the opening sequence with a flashback to a murder in 1985 (a great year for slashers, that one), then flash forward to the present day and a bachelorette party being planned at a campground in the same woods where the murder took place? So far, so good.

Our apparent protagonist, Jenny (Mary Glen Fredrick, who blows it out of the park in her feature-length acting debut), sees on social media that an estranged friend from her childhood is getting married and contacts her out of the blue to congratulate her, only to be unexpectedly invited to the get-together.

One trip to far-far-away and a broken-down vehicle later, and the aforementioned redneck, Devon (Daniel Boyd), waxes nice and creepy, like any redneck in a woodsy horror movie should.

He comes to Jenny’s rescue and drops her off at the camp, but not before mentioning the murder (which is now the stuff of local legend) Friday the 13th style with a sacrificial virgin twist.

We are then introduced to the group of friends who will be attending said party. 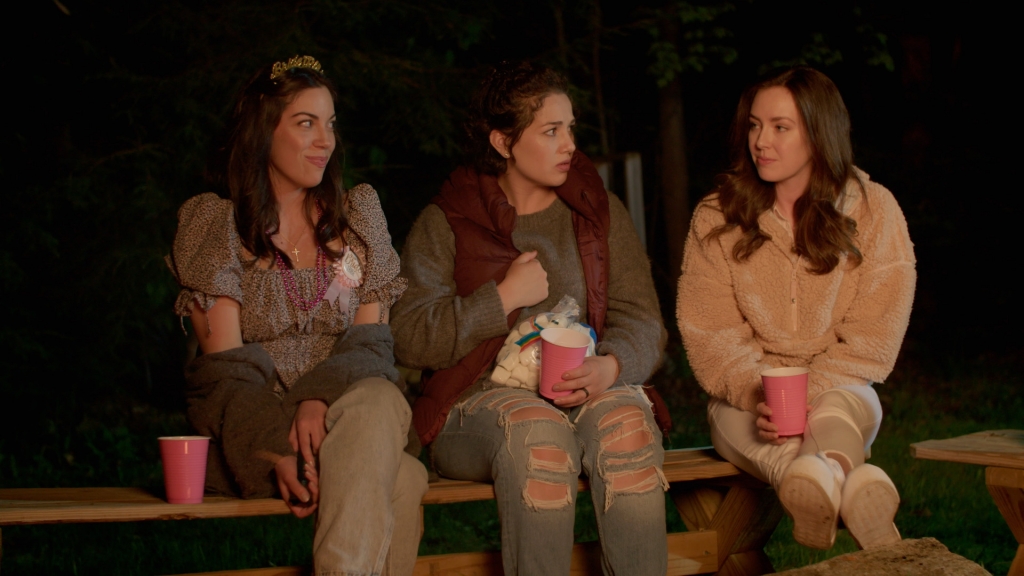 A little smoke, a little drink, a little campfire, and a lot of girl drama are pleasantly punctuated by a hip, better-than-expected soundtrack, which is very useful in keeping things rolling along at a nice pace but not in a hokey or overbearing way.

Also, we learn more about the legend of the murdered girl whose head was supposedly removed (oh, and her guts pulled out).

Poor, drunk Candace, in her booty shorts, wastes no time in staggering off into the woods alone.

Maybe Stag is gonna use a tried and true slasher formula after all – the creepy music would seem to suggest as much, as well as the snapping twigs and POV shots…but I guess we’ll see.

Time to build a little character while festooning the property with dick balloons and tripping balls according to schedule (great excuse to get rid of those pesky cell phones while we’re at it). And say, has anyone seen Candace? Meh, fuck it – let’s trip!

And what better way to trip than by running into the creepy redneck before snooping around camp in search of the confiscated cell phones and whatever else turns up?

At the very least, it’s a nice tension builder and a great opportunity to show off that gorgeous, eerie score.

And soon, we have our big reveal, which is worthy of any classic slasher. So now I have to say the words, “Movie, you were right, and I was wrong.”

The body count may not be that high, but the spookiness to laughter ratio is perfect, and what death there is…is…well, bloody exquisite.

STAG deserves a place of honor at any horror film festival for its surprisingly good writing, acting, cinematography, soundtrack, editing, and score…but especially for its slick humor and mature command of powerful themes like guilt, betrayal, friendship, and solidarity.

I haven’t been this pleased to be this wrong about a movie for a while.

And with a mere 92- minute running time and this glowing recommendation, you really have no reason not to check it out now, do you?

Trust me, if it could win my grizzled ass over, you’re gonna fucking love it.