A New Shot From ‘GHOSTBUSTERS’ Released 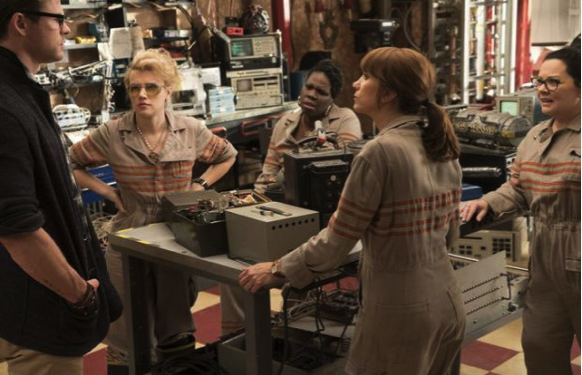 Paranormal researcher (Melissa McCarthy), a physicist (Kristen Wiig), a nuclear engineer (Kate McKinnon) and a subway worker (Leslie Jones) team up to defend the world against the returned spirits of dead criminals, pilgrims, old-timey sailors & gangsters, & Revolutionary War veterans from all eras of the big apple that returned to raise havoc and possess the living.

Andy Garcia, Michael Kenneth Williams, Matt Walsh and Pat Kiernan will also star in the new film. Additionally, ‘SNL’ vet Neil Casey has been confirmed to star, his role being that of a main villain (according to Bloody Disgusting). His role is rumored to be a returned spirit of a murderer who resurrects a ghost army to give hell to the city that never sleeps!

Paul Feig, director of this remake, has filmed cameos with some of the ORIGINAL cast, including Bill Murray, Dan Aykroyd, Ernie Hudson, Annie Potts and Sigourney Weaver. The film is set to be released July 15th of this year for the summer blockbuster movie season.