Headlines and Horror: The Trial of the Chicago 7

With an election right around the corner and a nation divided, the movie of the week (October 11-17, 2020) is “The Trial of the Chicago 7” on Netflix.

WHAT HAPPENED THIS WEEK?
The confirmation hearings concluded for Judge Amy Coney Barrett, President Trump’s nominee to replace Justice Ginsberg on the Supreme Court. In addition to arguments about whether a lifelong appointment to the nation’s highest court should be made weeks before an election, senators questioned Barrett’s views on controversial issues that could come before the court, including abortion, guns, and the Affordable Care Act. Could she be impartial on crucial issues affecting millions of Americans, in spite of her strongly held personal beliefs? Democrats say Barrett refused to answer over 100 questions. Instead, she simply vowed to keep an open mind on any matter that comes before the court.

Not only did this story about a peaceful protest that turned into a violent clash with the police land in the middle of a national conversation about the right way to dissent and the problems with policing, but it also sheds light on the glaring failures of our criminal justice — including a system rigged to disadvantage minorities and the myth of impartial judges.

The Trial of the Chicago 7 is about a disparate group of seven activists who were charged by the government with conspiracy and inciting a riot in the aftermath of antiwar protests at the 1968 Democratic National Convention.

Paramount hoped to release the film just before the presidential election, hoping the timing would increase public interest in a politically charged courtroom drama. But then the George Floyd protests over the summer added a renewed sense of urgency to the subject matter. As if that wasn’t enough, just before the film was scheduled to drop on Netflix on October 16, 2020, Justice Ginsberg passed away — and Republicans rushed to fast track the confirmation of her replacement in the midst of a heated national debate about justice and political corruption. 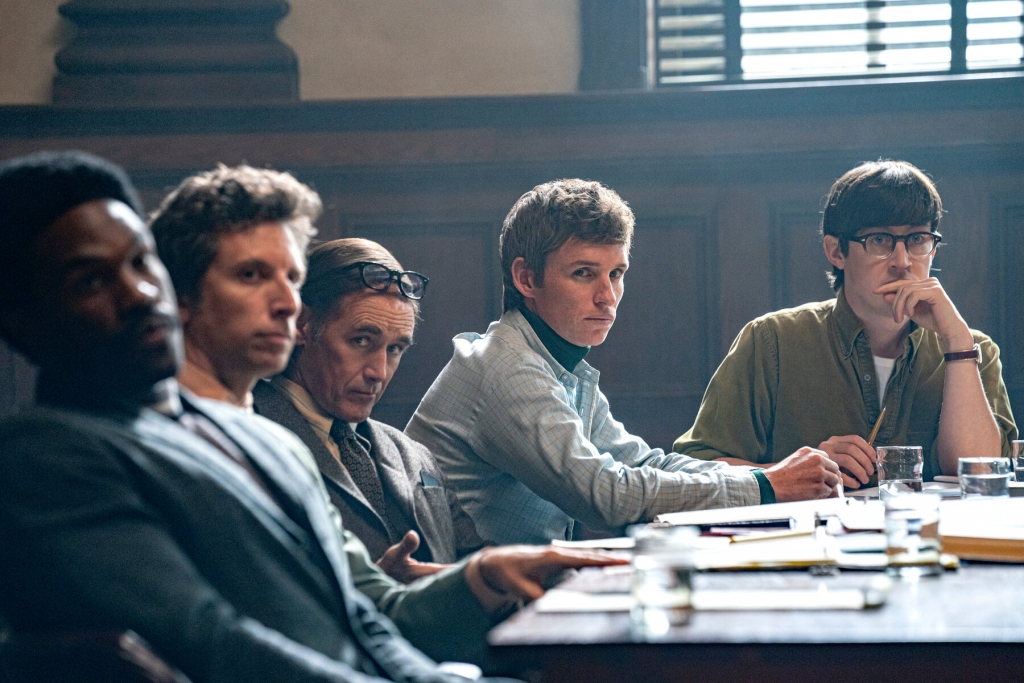 Scores of protesters march in the streets of cities across America. Disillusioned and demanding change, they chant, “The world is watching.” Violent clashes erupt between law enforcement and the citizens they are sworn to protect. Meanwhile, a historical presidential election looms in the background. And on the precipice of significant political and cultural change, thousands of Americans are dead.

Just like today, more than five decades later, systemic racism was central to the protests of 1968. Reverend Dr. Martin Luther King Jr. had been assassinated just months earlier. And just like today, millions were mourning and protesting the significant loss of American lives. Only, this time it wasn’t a pandemic but the war in Vietnam and a relentless draft claiming thousands of innocent victims.

In late August, tensions culminated in Chicago, in the shadow of the Democratic National Convention. The National Guard, U.S. Army troops and 12,000 Chicago police officers were mobilized against 10,000 demonstrators.

Seven organizers emerged as leaders of the rebellion. The most notorious among them was the media-savvy jokester Abbie Hoffman (Sacha Baron Cohen in a career best performance), the leader of the Youth International Party (the Yippies), and Tom Hayden (a brilliant Eddie Redmayne), the founder of the Students for a Democratic Society (Hayden was a peace activist who would later marry Jane Fonda). These two men represented the dueling radical leftist and moderate Democratic split still central in the party today.

Along with Hoffman and Hayden, six other men were indicted. They included Hoffman’s associate Jerry Rubin (Jeremy Strong), Hayden’s associate Rennie Davis (Alex Sharp), conscientious objector David Dellinger (John Carroll Lynch), and activists John Froines (Danny Flaherty) and Lee Weiner (Noah Robbins). The co-founder of the Black Panther Party Bobby Seale (Yahya Abdul-Mateen II) was also indicted, but his trial was later separated from the rest of the group, thus why we have the Chicago 7 and not the Chicago 8.

These men were chosen by the federal justice system to be used as examples. 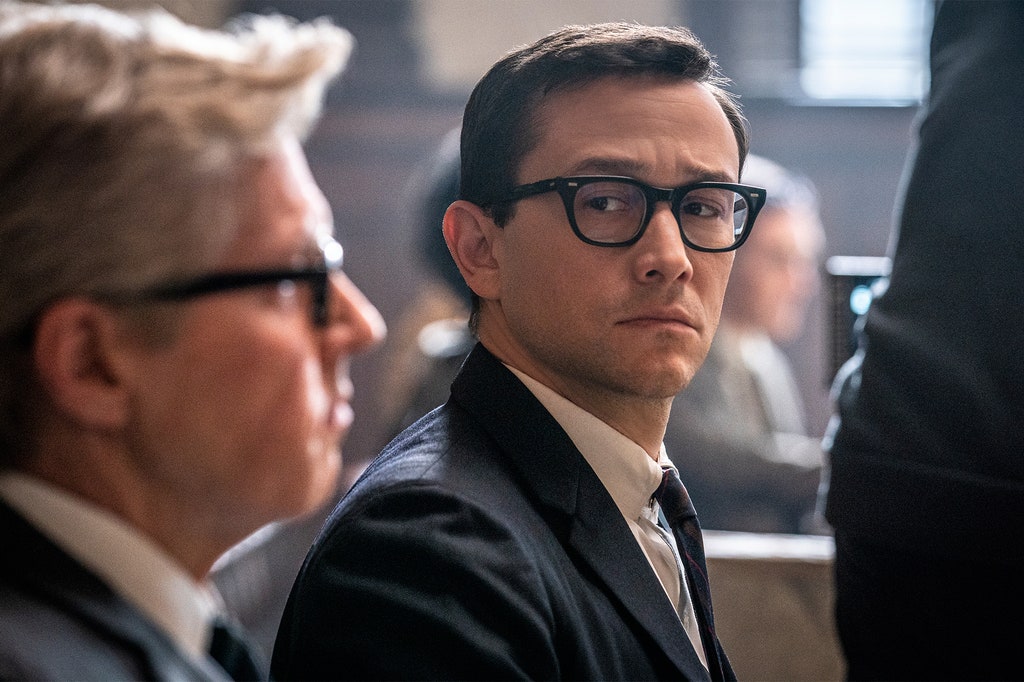 While a grieving nation was being torn apart by fear and mistrust of American institutions, the nation’s leaders sent a clear and sobering message: “This is what happens when you cross us.”

The Trial of the Chicago 7 takes place primarily in the courthouse, with flashbacks (and real footage) showing us the events that led up to the protesters’ violent confrontation with the police at the Chicago convention.

The young, conflicted lead prosecutor Richard Schultz (Joseph Gordon-Levitt) has a distaste for the men he has been appointed to indict, but he doesn’t agree that they are lawbreakers or that they conspired to start a riot. Meanwhile, a passionate William Kunstler (Mark Rylance) does his best to defend the men in the court of the openly racist, cruel, and very biased Judge Julius Hoffman (Frank Langella).

Hoffman personifies injustice. He does everything he can to suppress the rights of the Chicago Seven, including ousting jury members who seem sympathetic to their cause and literally gagging Bobby Seale in court. He was so biased against the accused that he buried them in hundreds of charges of contempt of court. With trumped up charges resulting from a political vendetta and a judge who doesn’t seem to give a damn about actual justice, all the cards seem to be stacked against our young defendants. And the trial that ensued became a famous circus of the American court system.

The opening scene shows Richard Nixon’s attorney general, John Mitchell (John Doman), ordering Schultz to secure convictions, no matter what the cost. Mitchell replaced AG Clark (Michael Keaton). Clark refused to bring charges following the riots, as the evidence clearly showed it was the cops who incited the violence, not the protestors.

But once Nixon took office, he deployed his Justice Department as a political tool — something President Trump has also been accused of in modern times. 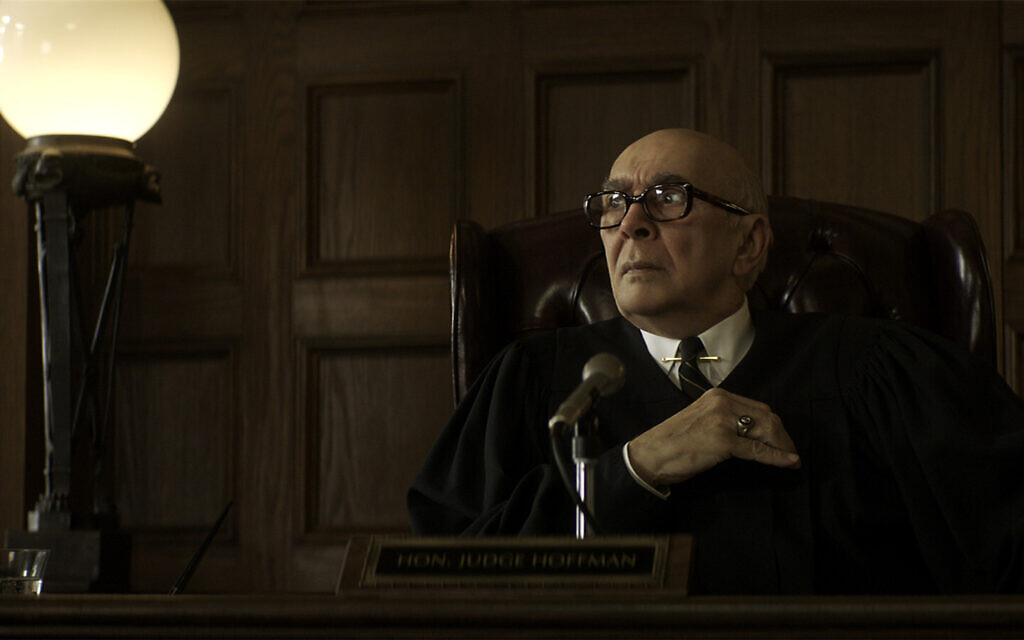 Langella’s portrayal of Hoffman as a vindictive judge who pre-determines the outcome of the trial before it even begins is absolutely chilling. And it illustrates the danger in blindly accepting that judges are always fair arbiters of justice. The film’s most upsetting scene, among many, is Hoffman’s order to have Bobby Seale bound and gagged in an American courtroom. His clearly prejudicial behavior causes the clean-cut student activist, Hayden, to question the authority of the justice system for the first time. Even the District Attorney, Schultz, becomes disillusioned as Hoffman blatantly antagonizes the activists.

“If we’re guilty, why not give us a trial?” pleads the group’s most mild-mannered, pacifist members.

The reality is not encouraging.

Seventy-three percent of federal judges are men, and more than 80 percent are white. Studies have shown that white federal judges are four times more likely to dismiss race discrimination cases outright and are half as likely as black federal judges to rule in favor of people alleging racial harassment in the workplace (as reported by The Washington Post).

Judge Hoffman is the worst case scenario of what happens when a judge wields his tremendous power in a dangerous and tyrannical way.

This movie reminds us that judicial impartiality isn’t a given, something that becomes more important as a Supreme Court candidate repeatedly refuses to answer simple and important questions about her views. It also makes us painfully aware that governmental institutions may not always be dedicated to protecting and serving — and justice may not always be dispensed fairly and ethically, free from bias, political agendas, or prejudice. 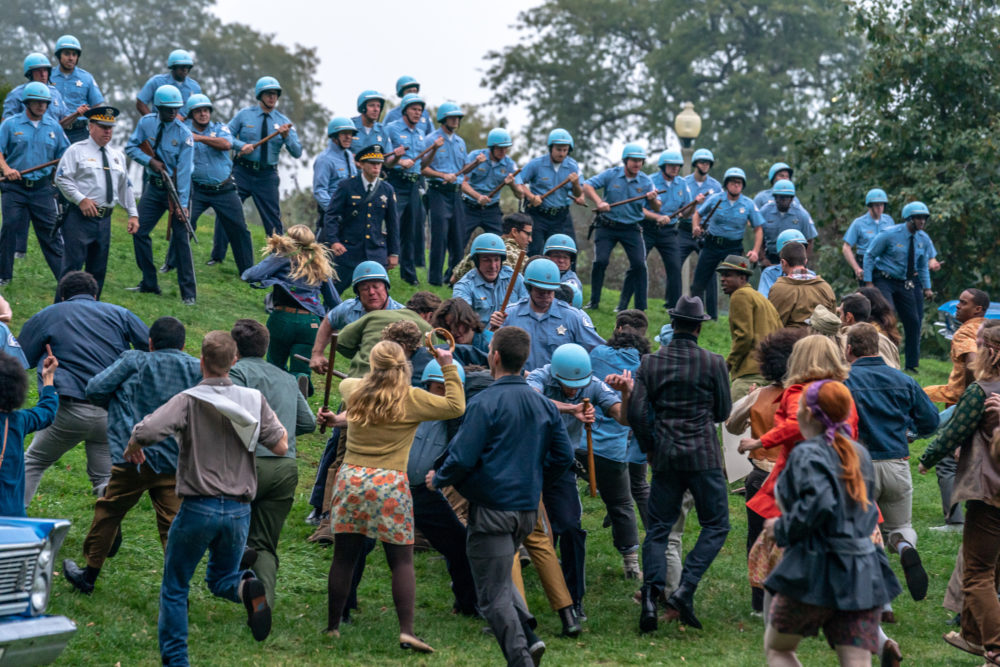 Aaron Sorkin is an extraordinary writer, as his work, especially in television, proves. But he also demonstrates his skill as a director here, delivering one of the most compelling and important films of the year. Chock full of brilliant, Oscar-worthy performances, the ensemble cast truly shines. As a result, this historical, legal drama is a riveting watch.

1968 was a time of massive social upheaval and unrest. Over the last six decades, precious little seems to have changed.

The horror here comes in the form of the film’s timely, relevant, and  devastating message: we can’t always count on our leaders to follow the noble pursuit of truth and liberty above all else.

The Trial of the Chicago 7 is now available on Netflix.