If you grew up believing that the worst that could happen on Christmas was getting a lump of coal in your stocking, wait until you meet “Krampus”.

It can be easy in the glut of recent Krampus movies to overlook the gem that is Michael Dougherty’s 2015 take on the legend. Dougherty, who is known primarily for his classic Halloween anthology tale Trick ‘r Treat, takes on Christmas and brings the creepy into Christmas.

Krampus begins with the familiar. We see a family shopping during a holiday rush that turns into all out chaos. It makes those YouTube Black Friday videos look like a quiet day at the mall. Returning home, they prepare for the onslaught of their family visiting, and we get insight into their characters. Adam Scott (Little Evil) and Toni Collette (The Sixth Sense) play Tom and Sarah, a  married and very harried couple.

Tom is working too much, and Sarah is feeling the pressure to have a perfect holiday. Their children, Max (Emjay Anthony) and Beth (Stefania LaVie Owen), are typical siblings. Max is on the cusp of not believing and is struggling with writing a letter to Santa. He is encouraged by his Omi (German for Granny, Austrian actress, Krista Stadler) to write his letter, and she offers comfort to Max who feels like his family has lost the meaning of Christmas. During these scenes, we also start to see cracks in the perfect family veneer.

When his relatives show up, it’s a scene from Christmas Vacation. While Max’s family is quietly dysfunctional, Sarah’s sister’s family is a train wreck. David Koechner (Anchorman) and Alison Tolman (The Gift) play Howard and Linda, who along with their three kids and their sarcastic and cynical Aunt Dorothy (Conchata Ferrell), are a blizzard of chaos on the household. After an altercation with his cousins, Max says he’s done with Christmas and shreds his letter.

It is as if a light goes out. What has been a dark comedy about family soon becomes a much darker story as the titular character shows up with evil elves and killer toys. While the day to day lives of the families had been pulling them apart, crisis brings them together as they face Krampus.

I absolutely love this movie.

Much like he did with Trick ‘r Treat, Michael Dougherty has crafted a lovely homage to a traditional holiday by examining some of its pagan roots and shining a light on some of the darker traditions and lore of the holiday. Dougherty takes the tradition and Americanizes it, and I mean that in a good way. Traditionally, Krampus is associated with St. Nicholas Day in Europe. Dougherty’s film focuses on Christmas, and in doing so, he makes Krampus reflect the dark side of Santa as celebrated here in the States.

But what makes ‘Krampus’ stand out from the rest of the movies is that the character isn’t treated as a gimmick. At its heart, Krampus isn’t a horror movie, but a Christmas movie. It’s about family and getting along with people who you are forced to spend time with simply because you’re related. It’s about how those bonds, which seem tenuous, are actually steely cords that bind us together during adversity — and how that is all tested at the holiday season.

But because it’s a Christmas movie doesn’t mean it doesn’t also do horror very well.

The blizzard scenes (created on a soundstage) seem as real as any winter storm this Iowa boy has ever suffered through. They give the movie a claustrophobic edge that a real blizzard gives you, as you feel cut off from the world by blankets of snow. The creature effects are, for the most part practical, and it gives the movie a tactile feel that digital just couldn’t have accomplished.

And the cast is absolutely wonderful, particularly David Koechner and Conchata Ferrell, whose roles could have easily fallen into stereotypes but are given real heart by the actors. 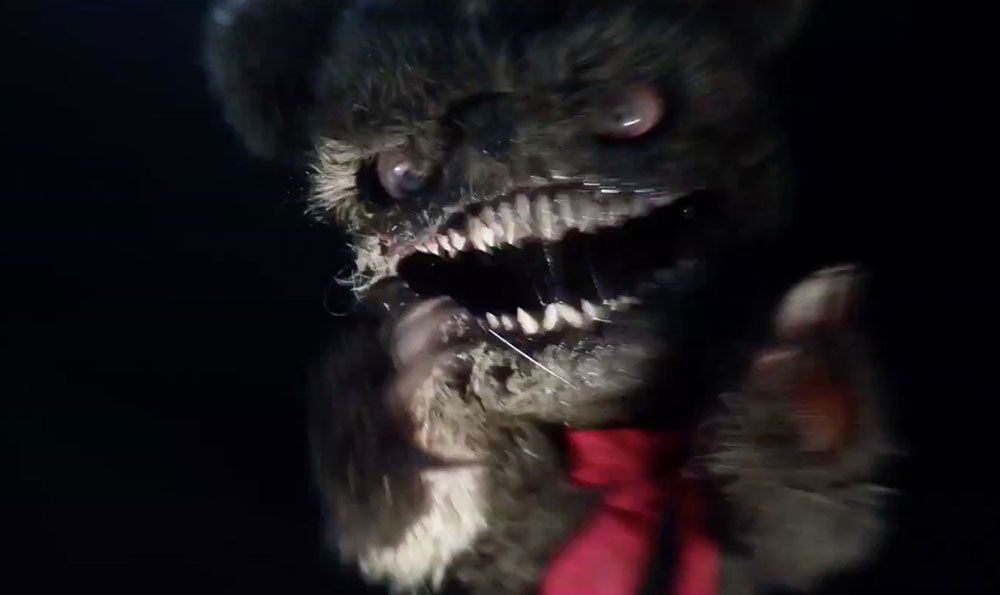 This version of Krampus succeeds where so many others have failed because it has the heart of the Christmas movie along with the tension and thrills of a great horror movie.

At our house, we have a stack of movies that we watch each and every year as part of our traditions. Krampus is one of only later additions, but it’s been added to the tradition just the same, and I look forward to pulling it out each and every year.