It may not be traditional horror, but the essential holiday classic “It’s a Wonderful Life” is more than worthy of horror fans’ attention at Christmastime. 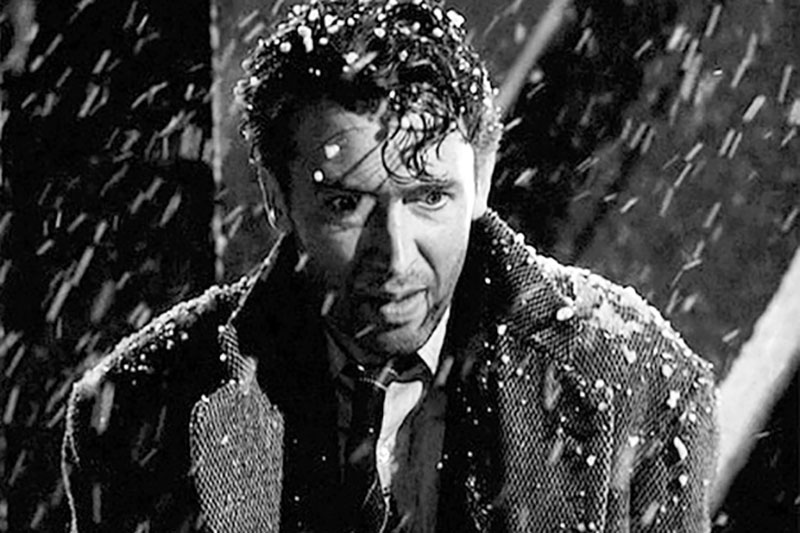 We’ve made it to Christmas Day, the 25th day of the 25 Days of Holiday Horror here at Morbidly Beautiful Horror. Our talented crew of writers have introduced readers to murderous Santas, killer Krampuses (Krampi? Krampus’?), killer Mrs. Claus, a serial killer snowman, creepy children, and more!

After 24 days of bloody horror, I am asking your kind indulgence in this Christmas Day selection. Everyone, of course, has heard of the Frank Capra classic IT’S A WONDERFUL LIFE. It’s on some television stations around Christmas, some scenes have been used in commercials over the years, it’s been colorized and re-released, shown in theaters again and again, and is generally a fixture of the Christmas season. 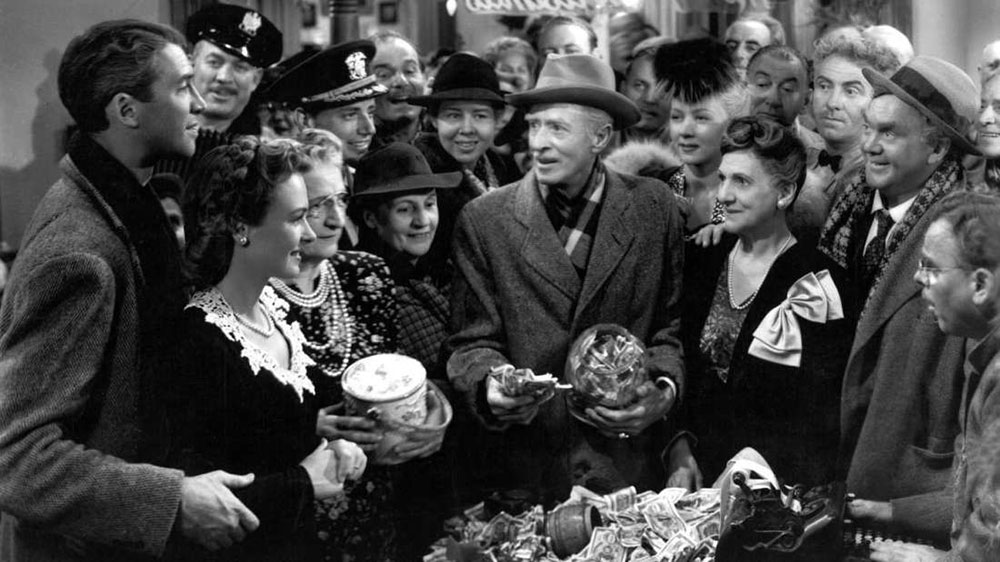 I’m asking this of all my readers: whatever your feelings of this movie, whether you’ve seen it before or not, allow me to argue that IT’S A WONDERFUL LIFE features some horror elements. Behind the veil of a happy, heartwarming dramedy lies a dark heart that could easily be at home in an episode of “The Twilight Zone” or even “Tales From the Crypt.”

Even if you haven’t seen the film, you are probably familiar with the story. George Bailey (James Stewart) grows up in a small town called Bedford Falls. Yearning to escape and go on adventures around the world, life throws up roadblocks to George fulfilling his dreams. His younger brother falls into an icy pond and George loses hearing in one ear saving him. 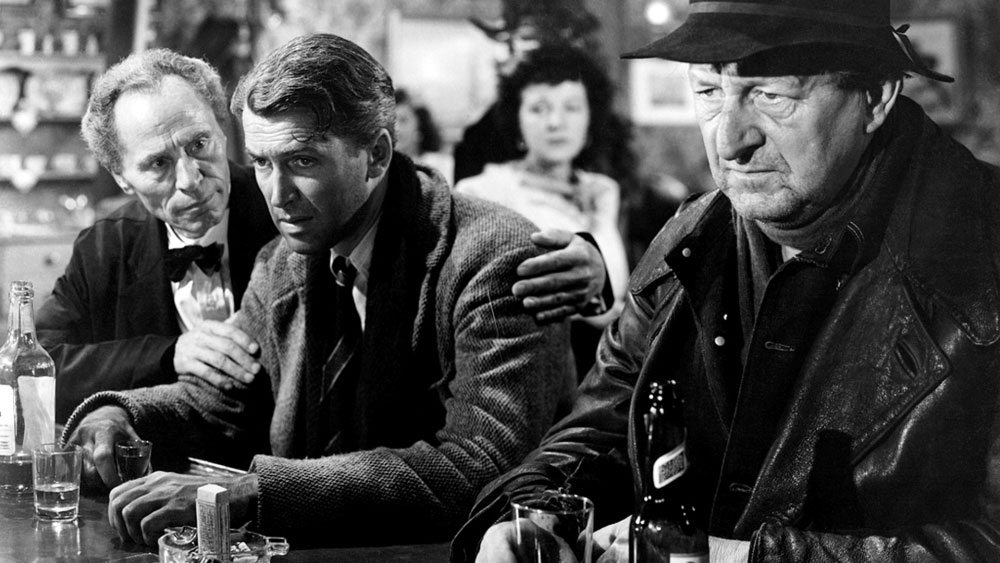 George must forgo college to take over the family business when his father dies suddenly, and his younger brother becomes a war hero, marries a college sweetheart, and takes a job far away from Bedford Falls. All this keeps George in Bedford Falls, running the family’s business, the Bailey’s Brothers Building and Loan.

Bailey’s main bank competitor, Henry Potter (Lionel Barrymore), wants to buy out the Baileys, forcing the community to come to the Potter bank for their home loan needs. If Potter buys out the Baileys, he will build slums and get rich on the back of the working poor in Bedford Falls. 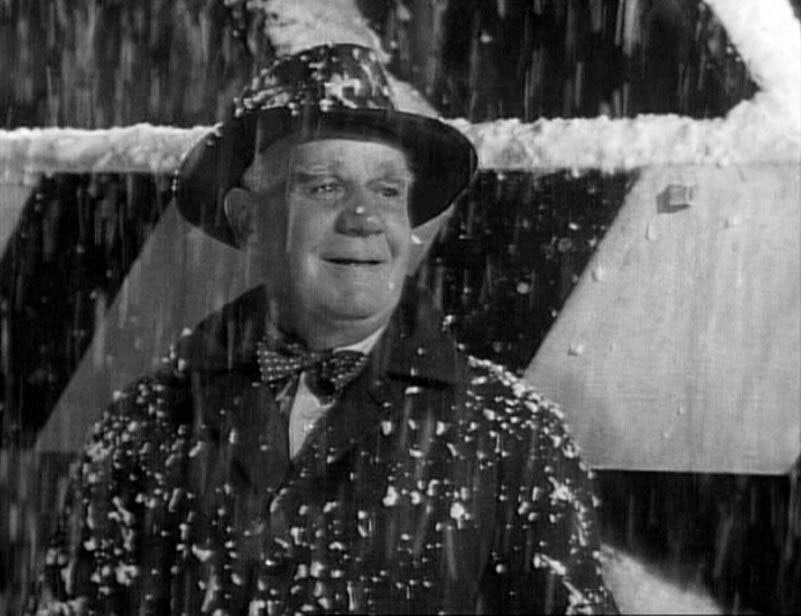 Faced with the humiliation of the investigation and press coverage it will cause, George breaks. He drinks heavily, lashes out at his wife and children, and even gets into a bar fight. Realizing that he’s worth more to his family as a dead person, due to his life insurance policy, George goes to a bridge to commit suicide. On the verge of jumping into the icy depths of the river below, an angel named Clarence intercedes. Determined to convince George that he’s living a worthwhile life, Clarence erases the existence of George Bailey in an attempt to show George what life in Bedford Falls would be like without him around.

Suffice to say, life in Bedford Falls is not good. The pharmacist, a one-time employer of George, has lost his business and is the town drunk. There is no Bailey Brothers Building and Loan, and Potter controls the entire town. He’s built slums, and main street is filled with businesses of ill-repute — a kind of 1970s lite 42nd Street where bars and burlesque joints dominate the night life.

George’s house is a dilapidated gothic nightmare, a skeleton of a home that only holds the ghosts of George’s memories of his one-time life. His mother runs a boarding house and his wife is a lonely spinster. Basically, no one whose life was touched by George is shown as having a good life with George removed from existence.

Pay close attention to James Stewart’s performance when he’s learning his lesson. The way he’s filmed, a little darker, eyes crazed, his actions wild and animalistic as he tries to get these people he grew up with to remember him. Stewart is brilliant in IT’S A WONDERFUL LIFE. 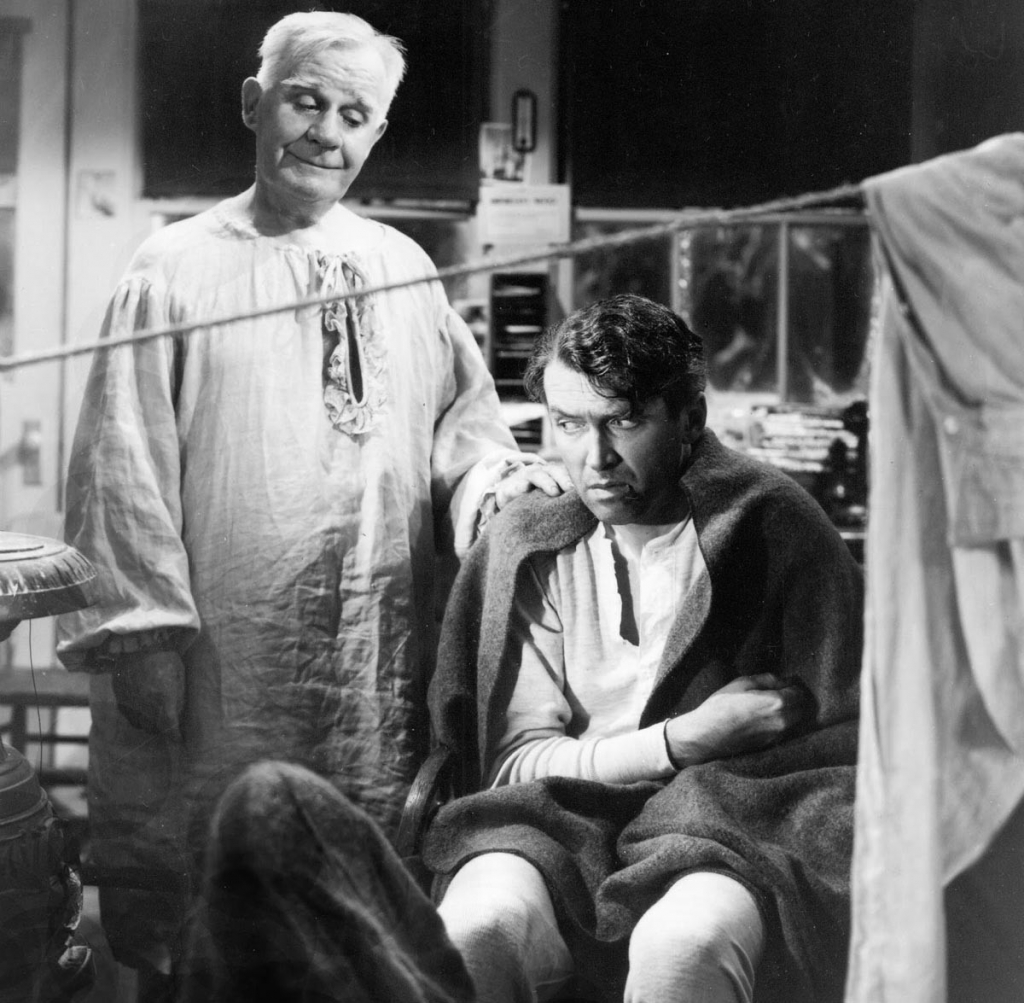 IT’S A WONDERFUL LIFE is a movie that is, even for the time it was made, a bit on the corny side. It’s that very sentiment that runs through the most of the movie that hides the darkness that is shown during the last half-hour or so of the movie.

IT’S A WONDERFUL LIFE is not a horror movie, but it is one of the great classic movies of all time. Maybe, just maybe, there’s enough elements of horror to keep horror fans interested and give this film a chance.

If I haven’t convinced you, just relish the words of The Gemini Killer to George C. Scott in THE EXORCIST III, “It’s a WONDERFULL life.”

I want to take a moment to thank you, our readers, for reading this article and supporting Morbidly Beautiful Horror throughout 2018. If you haven’t had a chance to read all the Holiday Horror articles, make sure to check out the 25 days of horror at this link: https://morbidlybeautiful.com/category/holiday-horror/