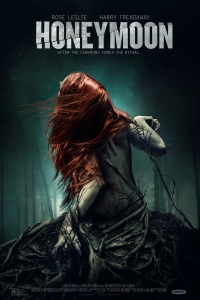 Honeymoon is a 2014 film festival favorite marking the directorial debut of Leigh Janiak (who also co-wrote the film). It’s a slow burn horror film, co-written by Phil Graziadel, which manages to create an overwhelming sense of tension and atmospheric dread as things go from bad to worse for a honeymooning couple. Made on a micro-budget with one setting and only two main characters, the film rests almost entirely on the strength of its two talented leads.

Rose Leslie (Game of Thrones) and Harry Treadaway (Penny Dreadful) play Bea and Paul, a young newlywed couple honeymooning in a remote cabin. The film takes considerable time to establish its characters and introduce the audience to the loving, overly affectionate, almost impossibly matched couple. The two actors have exceptional chemistry together, and it doesn’t take long to become fully invested in the plight of the young lovers. The long setup pays off when things start going terribly awry, and we watch the dream honeymoon turn into a nightmare.

Much of the film hinges on uncovering the mystery of what is happening to Paul’s beautiful bride who, after wandering out into the woods one night, comes back a little different. What at first is strange and bewildering behavior becomes increasingly more disturbing and cause for serious alarm. In order to properly review this film, there will be some spoilers ahead. If you’d rather not have too much revealed, skip down to the end of this review.

To be fair, most savvy genre fans will have figured out the mystery very early on in the film. In fact, there’s a pretty big hint at only the seven-minute mark. After some amorous time together, the idyllic couple is sleeping in bed. Suddenly, eerie lights from the woods outside shine in through the windows and wash over the couple, zeroing in on the sleeping Bea. The honeymooners are oblivious to the ominous sign of things to come, but the foreshadowing for the audience is far from subtle.

This scene is followed shortly by Paul and Bea’s strange encounter with the only other two people in the film, another couple in town. The man (Will, played by Ben Huber) is a childhood friend of Bea’s, and Paul can’t help but feel pangs of jealousy at their affectionate reunion. Will’s wife Annie (Hanna Brown) is acting awfully strange. Something isn’t quite right in these eerie woods.

Shortly after, Bea wanders out naked in the middle of the night. She claims she was sleepwalking, but Paul suspects a sexual tryst. However, that’s not even the worst of Paul’s worries. After her walk in the woods, Bea seems to remember less and less of their personal history. There are marks on her body she can’t explain. She’s forgotten how to do simple things like make French toast or coffee. Her phrasing is off. And the lustful woman who first came to the cabin has been replaced by someone who refuses intimacy at every turn.

At this point it’s clear that Bea is not who she used to be. We know something terrible happened in the woods, and it’s fairly obvious what’s behind Bea’s disturbing transformation. So the film becomes less about exactly what is happening and more about what’s going to happen next. Even though film buffs will recognize a storyline harkening back to Invasion of the Body Snatchers, the tension is created by watching the events unfold and seeing a perfect marriage fall apart before our very eyes.

While the story is familiar, Janiak offers enough inventive changes on the formula to remain effective and memorable. She excels at building a subtle but effectively sinister atmosphere. Beautifully shot, the setting is at once beautiful and otherworldly while also uneasy and foreboding. The film more or less rests with Leslie and Treadaway and the believability of their relationship and the strain it is put under. Fortunately, both deliver exceptionally compelling performances, bringing intense conviction to this familiar tale.

The unyielding focus on the two strong leads, isolated from the rest of the world both figuratively and literally, helps increase tension as the story kicks into high gear. When that happens, it’s truly terrifying. The final act of this film is unforgettably creepy, disturbing and truly gut-wrenching.

What makes this film work so well is the subtext behind the horror. At its core, genre elements aside, the film is about the long and painful discovery that the person sleeping next to you in your bed is not exactly who you thought they were. Janiak brilliantly stretches out Bea’s descent, giving us enough glimpses of the old Bea throughout to make the final reveal all the more chilling and heartbreaking. It’s a metaphor for the slow realization that something’s just not quite right…an examination of the ways in which a relationship metamorphoses after marriage.

Although it’s more creepy and unsettling than truly suspenseful, Honeymoon is a smart and stylish slow-burning horror film that really packs a punch. Chilling and nail-bitingly tense, the most terrifying thing about this film is what lies just below the surface.