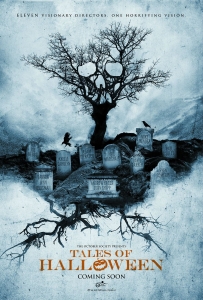 Fans of horror anthologies have become accustomed to the consistently inconsistent nature of the subgenre. Multi-director franchises like V/H/S and ABCs of Death have taught us to expect a fairly mixed bag when it comes to the quality of the segments produced, often with very little to tie the stories together. However, despite boasting 10 segments directed by 11 different people, Tales of Halloween feels remarkably cohesive. This is accomplished, in part, by having the directors shoot segments back-to-back on the same suburban street using many of the same extras and crew. Additionally, the level of quality is fairly consistent from segment to segment. As with all films of this nature, some of the segments rise above others. But there isn’t one in the bunch that falls completely flat.

In an obvious nod to the legendary John Carpenter (whose film Halloween III: Season of the Witch was supposed to launch a whole new horror franchise that would follow a different Halloween-based storyline every year, before commercial concerns necessitated the return of Michael Myers), the film begins with a still sultry and sexy Adrienne Barbeau basically reprising her radio DJ role from The Fog. Her commentary between segments forms the skeleton of the film.

We then launch into a very cool animated opening-credits sequence by Ashley Thorpe, accompanied by a lush musical score by composer Lalo Schifrin (who came out of retirement for this film), that does an exceptional job setting the mood for what’s to come.

While the segments, almost across the board, have a more comedic than horrific vibe, fans of classic horror anthologies like Tales From the Crypt and Creepshow should not be disappointed. The film has an endearing horror comic sensibility that is hard not to love. However, there is still plenty of gruesome stuff to enjoy, with the filmmakers pleasantly favoring 80s-style practical effects over CGI. Genre fans may also appreciate the traditional storytelling approach that steers clear of the overused found footage and shaky-cam mannerisms that tend to frustrate and detract from the story.

There’s an overwhelming sense of fun that permeates the film, making Tales of Halloween such a welcome treat for genre fans. It’s a veritable smorgasbord for horror nerds, from the characters snacking on Carpenter Bars, to Night of the Living Dead playing on every television, to the star-studded lineup of horror royalty making brief but memorable appearances throughout.

Tales of Halloween starts and ends quite strong, kicking the shenanigans off with Dave Parker’s delightfully sinister “Sweet Tooth” that gives birth to a new Halloween urban legend. The brilliant Neil Marshall closes out the film with “Bad Seed,” a tale of a Jack-o-lantern gone bad, featuring a very fun and creatively-designed monster. In between, we get a solid selection of visually diverse and entertaining shorts, ranging from the silly to the slightly more macabre. Given the diversity on display here, it’s likely one or more of the shorts may not be your exact cup of tea. But the film keeps things moving at a brisk pace that means you’ll be on to the next in a blink of an eye, and you’re bound to find something to love in even the weakest of the shorts. There’s no time for things to get dull in this well-produced, exceedingly well-executed omnibus.

Highlights for me included Darren Lynn Bousman’s “The Night Billy Raised Hell” which casts the amazing Barry Bostwick as a prankster demon who takes a young boy under his wing to show him the true meaning of Halloween. One of the more darker segments is Adam Gierasch’s “Trick” that packs a twisted punch and ends in a wickedly satisfying reveal. And Mike Mendez’s “Friday the 31st” is an over-the-top Friday the 13th slasher sendup with a fun and unpredictable payoff.

Other solid entries include Paul Solet’s “The Weak and the Wicked.” It’s a pretty straightforward tale, but the always delightful Keir Gilchrist shines as a picked-upon teen, and we get some nice creature effects in the end. Axelle Carolyn, who also spear-headed the anthology, delivers a strong cautionary tale of the “Grimm Grinning Ghost” about a young woman targeted by a Bloody Mary-like urban legend. “This Means War” from Andrew Kasch and John Skipp tells the tale of two neighbors in a violent battle over competing lawn decorations. It’s a fun watch in spite of a thin setup. Lucky McKee’s “Ding Dong” is one of the more chaotic and theatrical segments. There’s some good stuff here, but it feels a little disjointed from the rest of the shorts. Finally, Ryan Schifrin’s “The Ransom of Rusty Rex” is one of the most comedic entries, featuring a stellar (and, sadly, final) performance from the great Ben Woolf (American Horror Story).

While lean on legitimate scares, Tales of Halloween is great fun with a solid EC Comics sensibility. Well-produced on its modest budget, with consistently strong FX, it’s thoroughly enjoyable from start to finish. Reminiscent of another beloved horror anthology, Trick ‘R Treat, Tales of Halloween celebrates Halloween themes without irony and conveys a genuine affection for the genre that is hard not to love. With solid entries from among the genre’s best and brightest, this could easily become a welcome new Halloween tradition.

A welcome treat for genre and anthology fans, Tales of Halloween is a fun, gory, wickedly funny omnibus highlighting exceptional talent both behind and in front of the camera. Any shortcomings are easily overlooked due to the film’s strong visual style, great pacing, creative filmmaking and cohesive storytelling. Let’s hope this becomes a new Halloween mainstay.