In honor of its recent anniversary, we celebrate the enduring legacy of the 1921 silent horror film classic “The Cabinet of Dr. Caligari”. 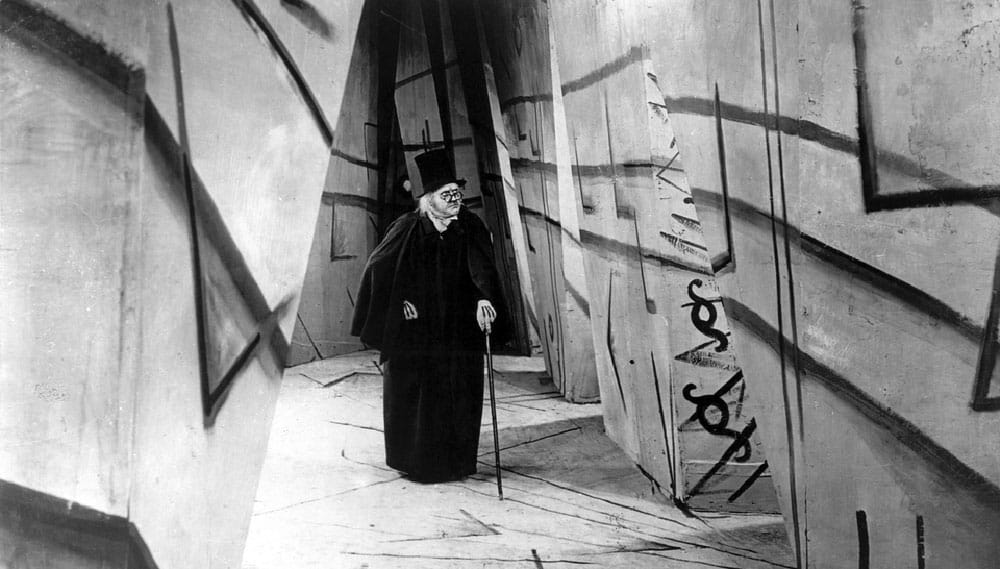 The influential silent horror film, The Cabinet of Dr. Caligari, opened in the U.S. on March 19, 1921. Directed by Robert Wiene and written by Hans Janowitz and Carl Mayer, the story is told in a flashback, a surrealistic story of murder and mind control that ends with an unexpected twist. The film for me is more of an experience than just a film to watch. The story is told in flashback against a backdrop of artistic sets that are drawn in a very skewed perspective of odd, sharp angles that are, appropriately disorienting as it draws the viewer into a disturbing tale where reality is turned upside down.

The film starts with Francis (Friedrich Feher) as he begins to tell his story to an elderly man while sitting on a bench in the park. Francis tells the man that spirits have driven him away from his family and home. A ghostly figure of a woman, Jane (Lil Dagover) in a flowing white dress walks past. She appears as if in a daze — as if sleepwalking. Francis tells the man that she is his fiancee and that they have gone through a great ordeal. The flashback begins with a town fair coming to the small town of Holstenwall.

Francis and his friend, Alan (Hans Heinz V. Twardowski)  plan to attend the fair. In the meantime, an elderly man, Dr. Caligari (Werner Krauss), is introduced as he visits the surly town clerk for a permit to have a booth at the fair, which will feature a somnambulist (sleepwalker) named Cesare (Conrad Veidt). The grumpy town clerk mocks Caligari but gives the doctor his permit. That night, the clerk becomes the first victim in a series of murders.

Alan and Francis, both have an amicable rivalry for Jane’s affection. The two go to the town fair where they go in to see Dr. Caligari’s exhibit — his coffin-like cabinet, which contains Cesar’s sleeping form. Dr. Caligari commands the pale, vampiric Cesare to awaken, and tells the crowd that Cesare can tell them their future. Alan asks, “How long shall I live?” and Cesare tells him that he’ll be dead by dawn. As Alan lies in bed that night, all we can see is a shadow of a man approaching. Alan awakens and is visibly terrified.

His murder is seen in shadow projected onto the wall, which is just as, or perhaps more disturbing than a more graphic, clearly visible scene. 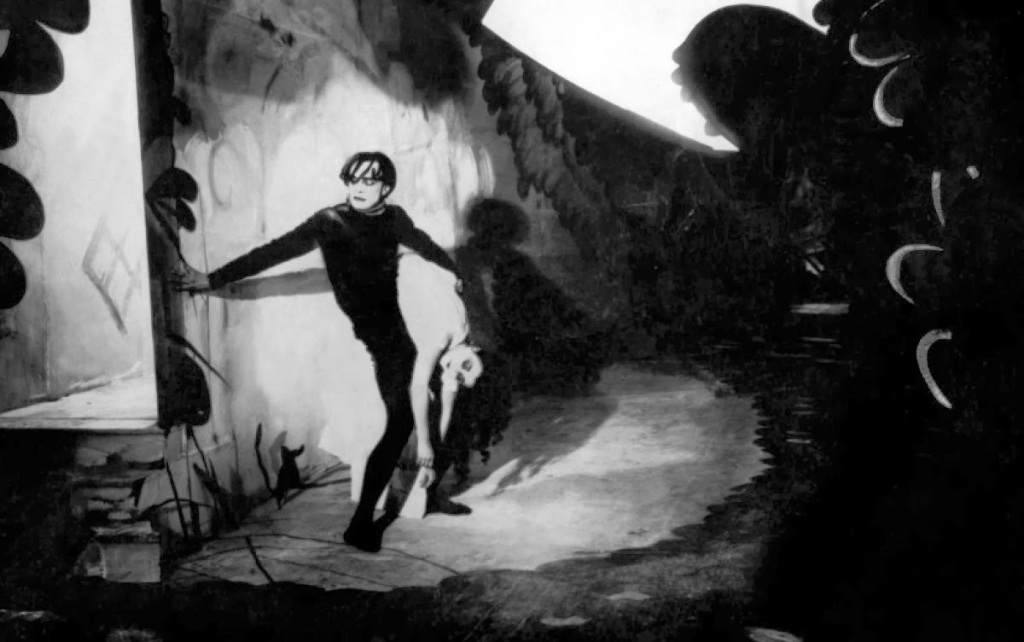 After learning about Alan’s death, Francis teams up with Jane’s father, Dr. Olson (Rudolf Lettinget) to investigate Alan’s murder. Dr. Olson gets authorization from the police to investigate Cesare and Dr. Caligari. That same night, police catch a man (Rudolf Klein-Rogge) who breaks into a home and attempts to murder an elderly woman.

He confesses that he was trying to kill the woman, but denied having anything to do with the town clerk’s or Alan’s murder. He admits that he was taking advantage of those murders, thinking that the perpetrator of those other murders would be blamed for the elderly woman’s death.

Francis goes out that night to spy on Dr. Caligari. Through the window, he sees Cesare sleeping in his cabinet. Meanwhile, we see Cesare creeping around Jane’s bedroom. His dark silhouette approaches her as she sleeps. He raises a knife to stab her but hesitates. He grimaces, and cringes as if in pain, and stops mid-stab. Instead, he abducts Jane, who wakes up and struggles but to no avail. A crowd sees Cesare dragging Jane and pursues him. Cesare drops Jane, runs, and falls to his death.

Francis and Dr. Olson meanwhile confirm that the man they caught is not who they are looking for since he was detained during Jane’s abduction. Francis goes with the police to Dr. Caligari, who tells them that Cesare is asleep in his cabinet. The police demand to see Cesare and discover that there is a life-size doll made to look like Cesare lying in the cabinet. Caligari flees, and Francis follows him to an insane asylum.

In yet another plot twist, we learn that Dr. Caligari is the asylum’s director. To keep this spoiler-free, all I’m going to say is that there are still more unexpected twists after that.

The Cabinet of Dr. Caligari is an innovative film for its time and stands the test of time. 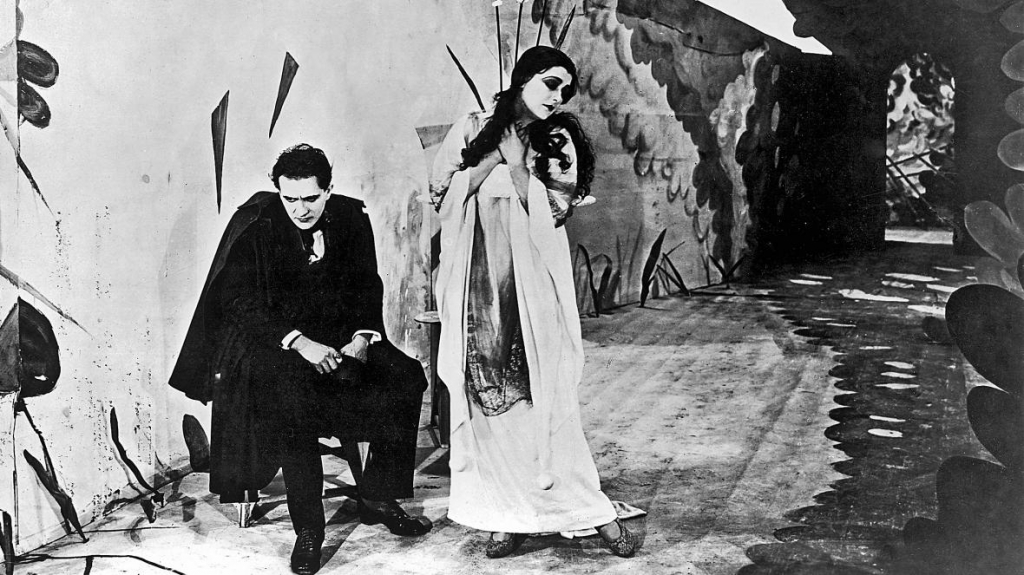 It’s a great film overall. The sets have a surrealistic quality, giving the viewer a feeling of being transported into a dreamscape, a dream world where the stark right angles of reality are blurred, bent, and skewed. Nothing or no one is what or who they seem. Filming technique, direction, set design, and a multi-layered plot with sharp unexpected twists and turns make this film a masterpiece.

The way the camera focuses in and out for a change of scene or flashback has the effect of an eye opening, like someone who is intermittently waking and reentering a dream.  The feeling can also be of being inside of the mind of someone who is mentally ill and has a distorted view of reality.

The story has been interpreted in many different ways.

The idea of mind control, distorted reality, and sleepwalking figure heavily in the film. There’s an underlying cautionary subtext about trusting authority. A doctor of any kind is considered well-educated and commands respect. Dr. Caligari manipulates and exploits the sleepwalking somnambulist through his knowledge of hypnosis, and uses Cesare to commit murder. Caligari is mocked by an authority figure (town clerk) which causes him to manipulate a sleepwalker (representing the masses) to kill him. This mirrors how within a totalitarian society, someone uses manipulation to gain power and control the (sleeping) masses.

The formerly mocked rises to power and causes citizens to commit what would be considered illegal acts under normal circumstances.

Considering that this is a film made during the 1920s, and art is a reflection of society, this could be seen as a window into the minds of the people and perhaps a disturbing foreshadowing of events to come. 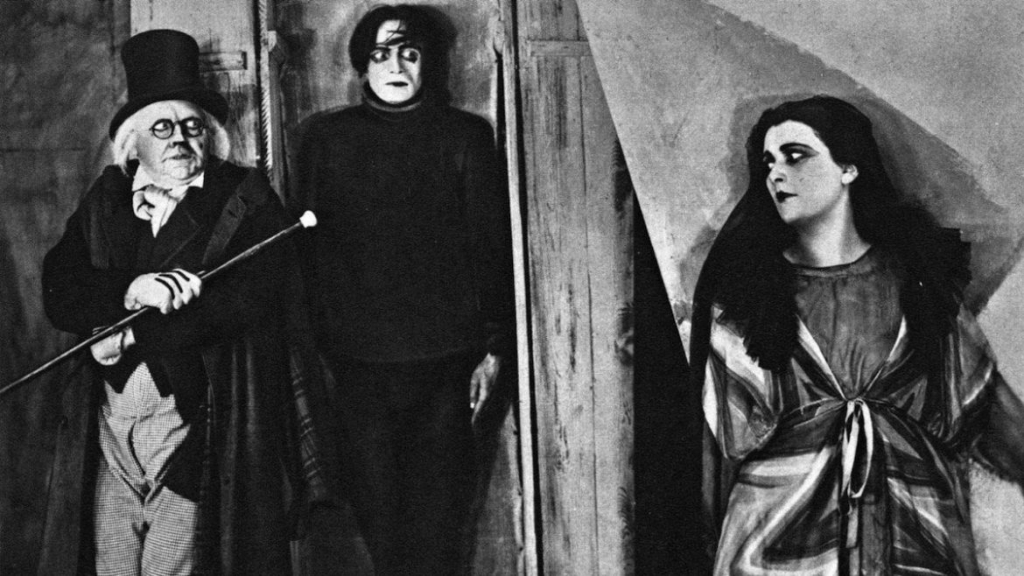 The dark imagery, tone, and themes are a reflection of a society living under the shadows of World War I. War, conflict, death, plus a severe economic depression that the war left in its wake. The film’s expressionistic design was in tune with a growing artistic movement at the time.

“At the time Caligari was made, Expressionism – which seeks to present the external world as experienced by inner, subjective emotions – was a well-established art movement encompassing painting, literature, architecture, music, and theatre. It was much in vogue in contemporary art circles, often being used by artists to express the discontent and depression of postwar society.”

Production head Rudolf Meinart thought that the expressionistic style would resonate well and cause a stir with audiences even if critics didn’t like it. The cast members even tailored their movements to suit the set design, by forming geometric patterns. Werner Krauss (Caligari) and Conrad Veidt (Cesare) are specifically mentioned as having worked with Max Reinhardt, a well-known Expressionist theater impresario.

Janowitz served in the military as an officer during World War I, and Meyer reportedly feigned mental illness to be exempt from military service. Janowitz’s experiences left him bitter about the military. Meyer was subjected to examination by a military psychiatrist, which left him distrustful of authority. It was Meyer’s girlfriend, an actress named Gilda Langer who suggested that he and Janowitz write a film together. Neither had any prior experience with filmmaking. The two wrote the script during the winter of 1918-19 over six weeks.

A trip to a circus sideshow in Berlin inspired the story. 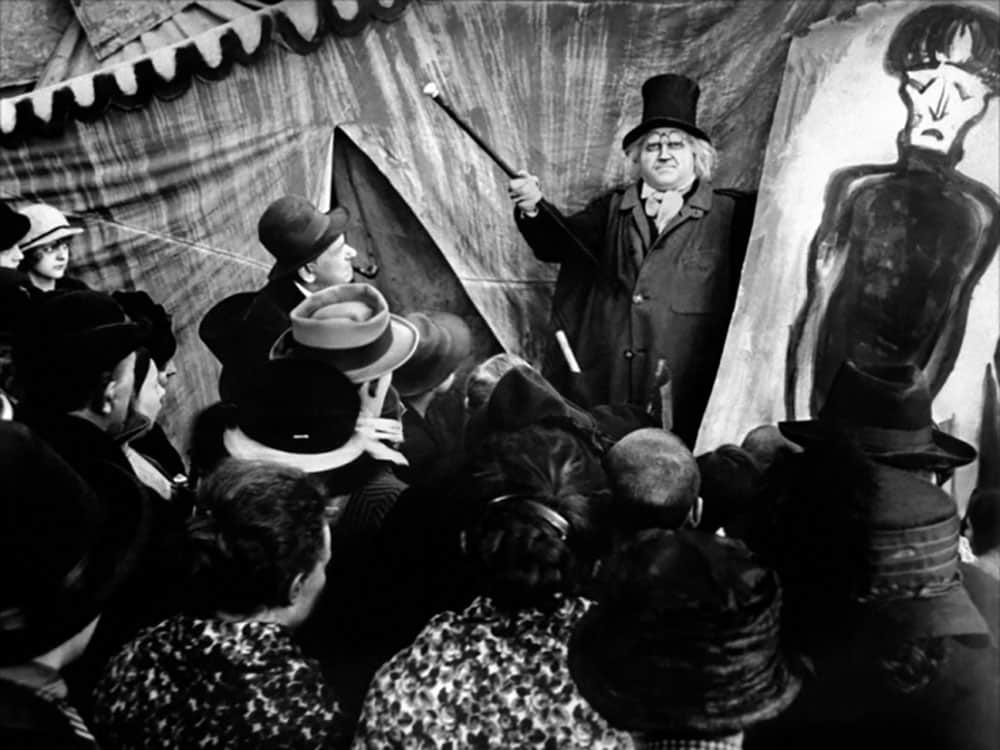 The show was called “Man or Machine?” where a man performed feats of strength under hypnosis.

The show, plus some of Janowitz’s experiences, served as inspiration. One was Janowitz’s time in the military which left him with a distrust of what he described as, “the authoritative power of an inhuman state gone mad.” In 1913, Janowitz believed that he witnessed a murder outside of an amusement park near Holstenwall, which served as the setting of the story. He said that he saw a woman disappear into some bushes. Only a few minutes later, a “respectable-looking” man emerged. Janowitz found out that the woman was murdered the next day.

According to set designer, Hermann Warm, during the making of the film, the writer’s never expressed any political intent or meaning to the story. Film historian David Robinson contended that Janowitz did not mention any type of anti-authority subtext in the story until many years after the film’s release. Perhaps, Janowitz was influenced by others’ interpretations of the film.

Whether you interpret the film as a political and social commentary on the abuse of power or simply a great crime drama/horror story with a surprise ending, The Cabinet of Dr. Caligari showcases a perfect storm of art, direction, acting, and writing coming together to create a masterpiece.

Some Fright Fun Facts About The Cabinet of Dr. Caligari: 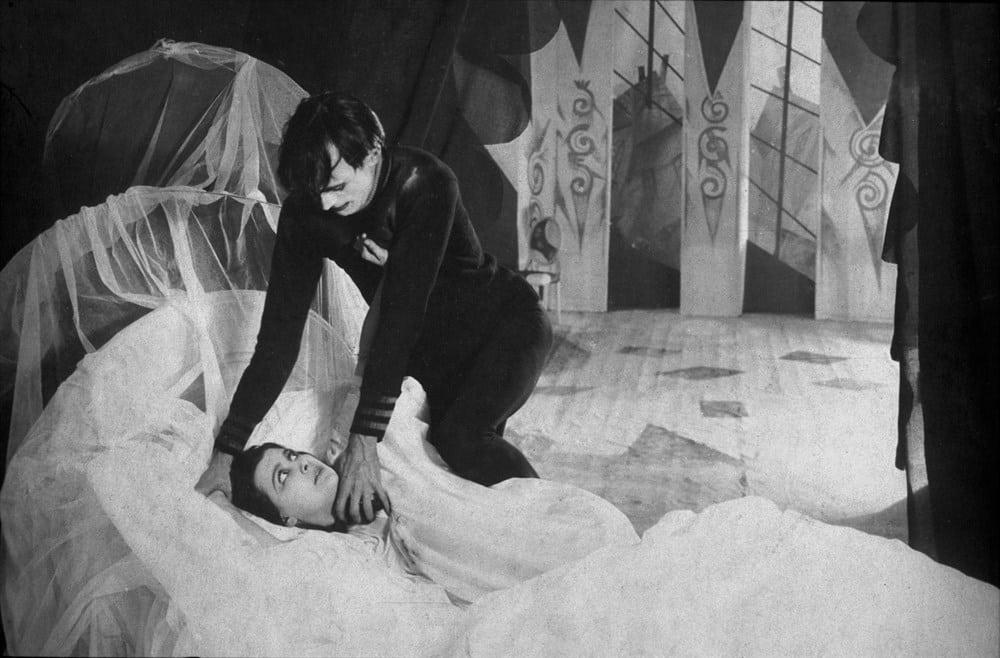 1. Besides encouraging Meyer and Janowitz to team up as a writing team, actress Gilda Langer served as the inspiration for Jane’s character. She also suggested that Janowitz visit a fortune teller. The fortune-teller told Janowitz that he would survive the war, but that Langer would die. Unfortunately, the fortune teller’s prediction came true. Langer died suddenly in 1920. She was only 23-years-old. Langer’s unexpected death served as inspiration for the film, inspiring Cesare’s prediction of Alan’s untimely death.

3. Conrad Veidt, who plays Cesare, went on to play roles in The Man Who Laughs (1928) and also appear in the classic Casablanca (1942), starring Humphrey Bogart and Ingrid Bergman.

4. The Cabinet of Dr. Caligari has been referred to as the first cult film by film reviewer Danny Peary, and critic Roger Ebert called it  “the first true horror film.”

100 years of The Cabinet of Dr. Caligari – Why we’re still living in its shadows, by Alex Barrett, Updated: 23 March 2020, British Film Institute.