For those extreme horror fans hungry for a bloody good time, the low-budget short “Keepsake” delivers the sexy, gory goods.

Keepsake is a 2019 25-minute horror short written and directed by Nathan Hine and produced by Hardcore Gore Productions. The film features a basic and quick-paced plot with no time for low points. The audience is pushed into the story immediately as we are presented with two hopeful singles who meet at a bar and waste no time in heading back to an out-of-the-way location for a tryst.

Our beau expresses hesitation at entering the shabby home, but is easily convinced to continue when told the location was an old family home kept for “special occasions”. And with the prospect of eroticism, he plunges heedlessly into danger.

Things definitely get down and dirty, but not in the way the man was hoping. Instead, the gorgeous femme fatale pulls a blade from her white lacy thigh-high stalking and slits her partner’s throat for a total of two consecutive minutes. We are then rewarded with six additional minutes of blood flowing from the protagonist.

The white lingerie is an obvious and well-planned choice for this gratuitous, blood-soaked scene. 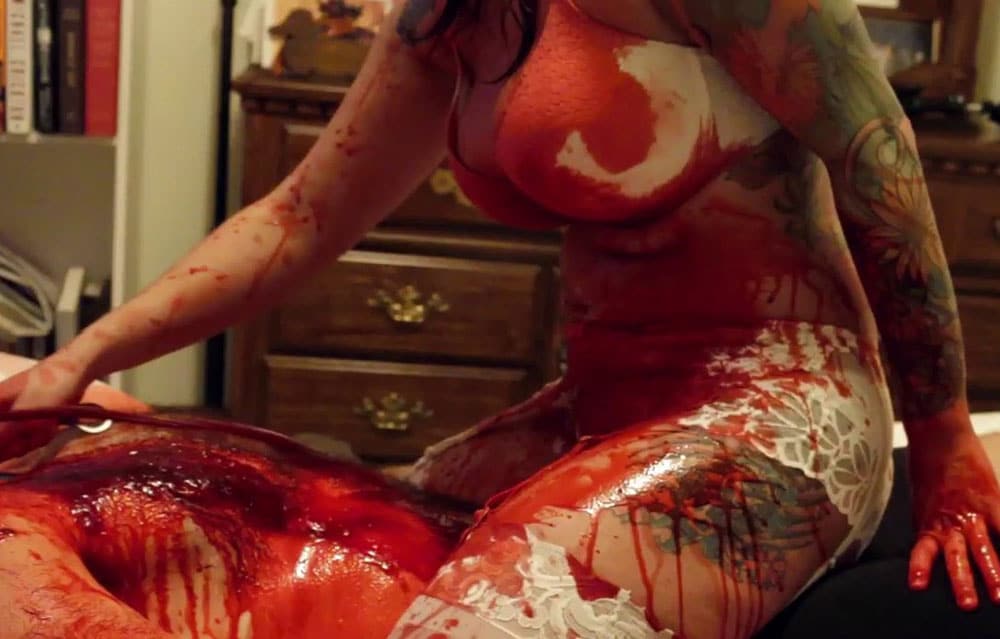 After the violent encounter, the audience is introduced to the film’s namesake, a memento cabinet in which trophies are stored for safekeeping.

The short features Tiffany Laskey as the unnamed female companion. If Miss Laskey appears familiar, she has also previously appeared in The Sideling Hill (also and a Hardcore Gore Production). Laskey was the associate producer for both pieces.

Bob Vresilovic (also of The Sideling Hill) appears as the nameless male companion. He also acted as producer and location manager for this short.

The short may not feature polished acting skills, but with a production company like Hardcore Gore behind the project, the film delivers on the carnage! The film is a gorehound’s fantasy that delivers on the goods.

Keepsake was released in the US on January 28, 2022, and you can grab a copy here. UK fans can head here to pick up their copy.