Hot Take: “Spiral: From the Book of Saw” Review

The newest addition to the SAW-verse, “Spiral”, is as bloody and merciless as one would expect — and I was so ready to play the game! 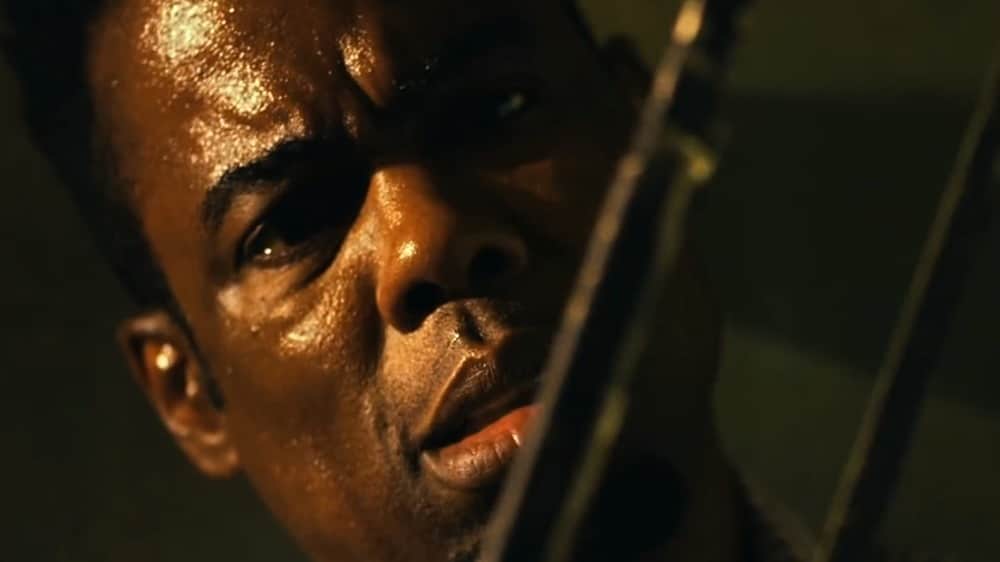 SYNOPSIS
Working in the shadow of his father, an esteemed police veteran, brash Detective Ezekiel “Zeke” Banks and his rookie partner take charge of a grisly investigation into murders that are eerily reminiscent of the city’s gruesome past. Unwittingly entrapped in a deepening mystery, Zeke finds himself at the center of the morbid killer’s game.

Director Darren Lynn Bousman (Saw II – IV) has done it again with this new reimagining. Penned with screenwriters Josh Stolberg and Pete Goldfinger (who also wrote 2017’s Jigsaw), Spiral: From the Book of Saw is chock full of new characters and some very inventive torture traps!

So how do you pick right back up where Jigsaw left off, in one of the biggest horror franchises of all times? I guess a better question would be, do you really want to?

The filmmakers made the (in my opinion) smart decision to take things in a different direction. Instead of making a sequel to the Saw films of old, Spiral: The Book of Saw is a standalone film that pays homage to the films that came before it, especially the earlier installments, without being tied to the increasingly complex and interwoven storylines that became a staple of the franchise.

Spiral certainly exists in the same world as the other films — there are brief mentions of the original Jigsaw, John Kramer, and the terror he caused — but everything that happened before has little to no bearing on what happens in this film.

In fact, Spiral can be watched and enjoyed completely on its own, even without having seen any of the prior films in the franchise. 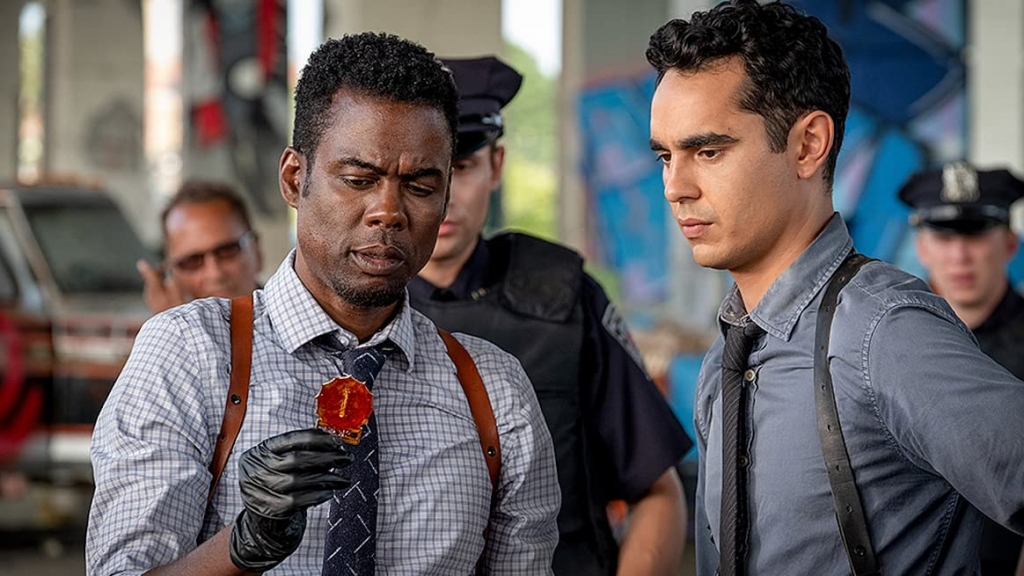 Chris Rock stars as Detective Ezekiel Banks, a copy who is quickly established as one of the “good ones” on a corrupt police force.

At the beginning of his career, he turned in his partner — a dirty cop who murdered a witness (I’m sure paid off by an important bad guy) — and sent him to jail. Becoming a pariah at the precinct, Zeke kept his job because his father, Marcus (Samuel L. Jackson), was the man in charge. Surrounded by a building full of crooked cops, Zeke does his best to work alone, keep his head down, and do his own thing to catch the bad guys.

(I’m a little confused as to why, if he’s a good guy, he still hurts suspects. There’s a scene with a drug dealer being shaken down for information that is intense. But I suppose it’s a matter of the ends justifying the means, and it’s certainly the lesser of many evils in terms of police corruption in this film.)

The one really big difference between this and other films in the Saw universe is that we stick tightly to Detective Zeke Banks more than any other character.

We get glimpses of backstories for other characters, to help us see why these dirty cops deserve to be punished. But all of the stories center around our main protagonist, Zeke. He receives clues, sent to him in little blue boxes, as he hunts for the Jigsaw copycat killer. Because he turned in a dirty cop twelves years earlier, none of the other officers have his back. The only person on his side seems to be his new rookie partner, Schenk (played wonderfully by Max Minghella, who you might remember from The Handmaids Tale).

Even Zeke’s Dad, Marcus, seems shady. He owns a fancy car and a fancy house — not the lavish lifestyle you would expect from a retired cop.

So, one by one, officers from the Metro force are disappearing. All the cops get a choice when they wake up in their inventive torture devices. Pick one way and you will lose an important body part, but you go free. None of the choices are good in any way, but it’s up to them to decide.

The bad cops were definitely guys that I loved to hate. 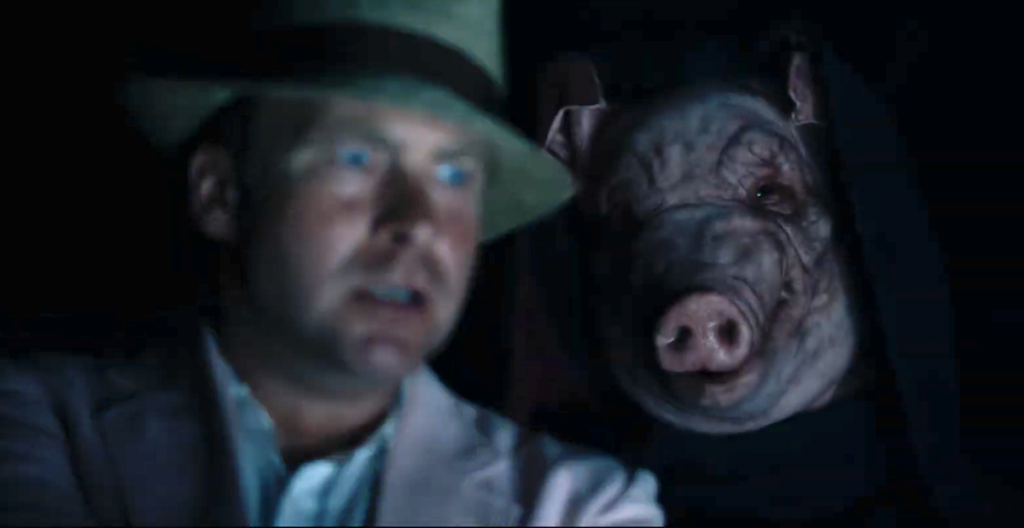 It was satisfying for them to get what they deserved, especially since the torture devices mirrored the crime our vigilante wanted to punish them for.

I don’t want to spoil too much because, as with every Saw film, the inventive torture devices are a huge part of what makes this film so fun. But I’ll give you one example. One cop, who has a nasty track record of lying in court multiple times to affect the outcome of a case, ends up on the receiving end of a brutal tongue removal.

Let’s face it, Jigsaw was never subtle in his morality or in his unique style of “justice” disguised as torture. Spiral’s new, faceless killer is certainly no better — and just as viciously judgmental.

This killer’s look is different though. Aptly, his guise to hide his identity is a pig mask and a really darling (to me anyway) pig/cop puppet. Not quite as cool as Billy the Puppet on a trike, but still quite effective and memorable.

We also get a clever use of the red “spiral” pattern, taken from the face of Jigsaw’s puppet in a great nod to the earlier franchise films, which is used as a marker/calling card to help direct us to the bloody crime scenes.

The cinematography from Jordan Oram has a wonderful old-school aesthetic. 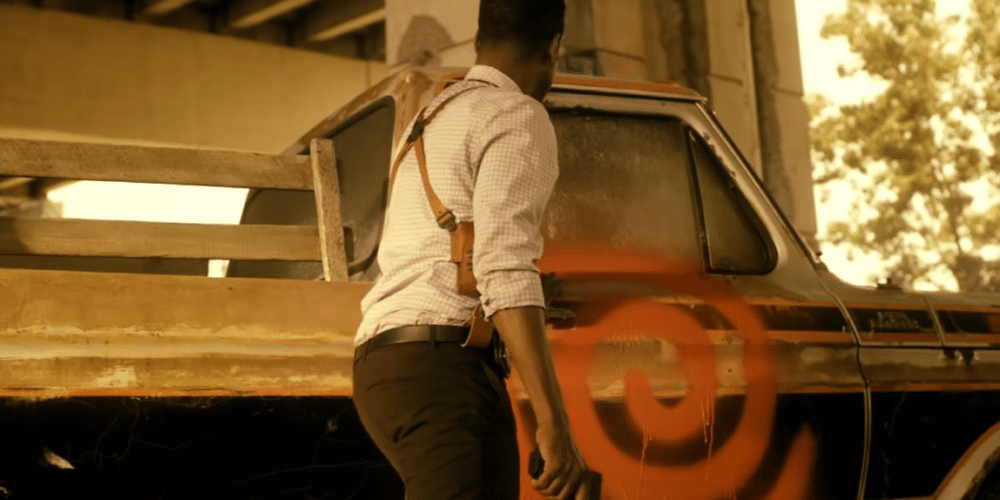 With a classic crime thriller film design, it looked hot, and the brown-hued palette was so perfect that you could almost smell the dust and sweat. I almost expected to see Sam Spade step out of one of the offices.

I also loved the torture device designs and the SFX. One thing Bousman does perfectly is that he never cuts away right at the goriest scenes. We get every sickening moment! I could have used more gore and many more machines of torture, but I’ll take what I can get. (Yeah, I’m a sick puppy!)

I had two moments that I appreciated above all.

One was the kill in the subway. It happens in the first few minutes of the film, so I don’t feel bad mentioning it. But, wow, I was on the edge of my seat waiting to see what choice this cop would make.

I also loved a scene towards the end, when Zeke is handcuffed to a pipe. He sees a hacksaw, and he looks like he considers cutting off his hand in a very classic Saw moment. But luckily, he sees and uses a hairpin laying on the floor instead to pick the lock. This was another great homage to the film that started this juggernaut of a franchise while helping show how smart Zeke is and how level-headed he remains in a time of crisis.

My only small criticism of the film is that, instead of feeling like something truly fresh and new, it feels like it’s been around for a while and I’m only just now getting around to watching it. 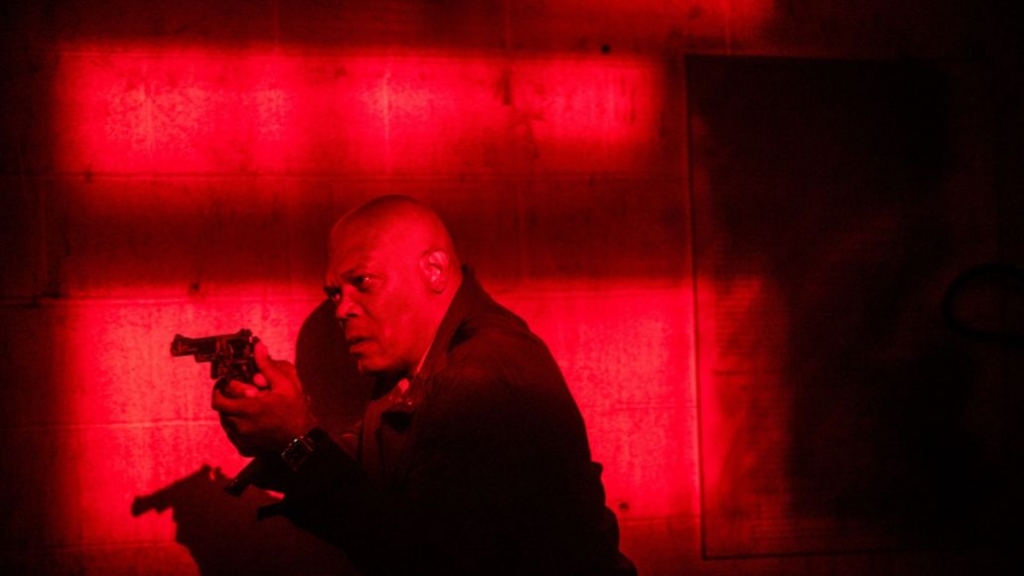 There are cell phones, so it is set in the present, but it has a nostalgic film noir, bad cop movie vibe.

It even reminded me of one of my favorite crime thrillers, Se7en. It’s brutal, but also character-driven and strongly focused around the mystery of who is doing the killing. In that way, honestly, it’s not much of a criticism at all — except that it might let down some viewers anxious to see something really innovative being done with the franchise.

This hotly anticipated film has taken a painfully long time to get released (COVID-19 added a year delay). Now that it’s finally here, hurry on out to the theaters (yes, out to the theaters) and see Spiral: From the Book of Saw — now! You will love discovering a new criminal mastermind as he unleashes his twisted justice. How much pain could you handle to save yourself? Come watch the grisly torture and discover how well these flatfoots do.