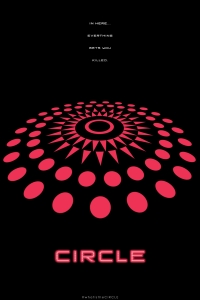 It’s rare when a blind watch on Netflix turns out to be as surprising and utterly enjoyable as Circle (2015). I love discovering these hidden gems and finding films that manage to captivate with creative concepts and smart psychological horror. This one completely flew under my radar. I hadn’t heard of it before, but I was very intrigued by the synopsis:

Held captive and faced with their imminent executions, fifty strangers are forced to choose the one person among them who deserves to live.

I’m going to be careful not to give too much away in this review, because a huge part of the fun was trying to figure out what was happening, why it was happening, and how it was all going to play out. So here’s the high level overview. Fifty strangers wake up in a dark room, where they are standing in two concentric circles and have little memory of how they got there. They immediately learn that unseen forces will vaporize them if they move and that even keeping still is no guarantee of safety; before long, they realize that the group itself is somehow collectively deciding who lives and who dies.

Making their feature debut, writers-directors Aaron Hann and Mario Miscione deliver a spooky, incredibly suspenseful thriller reminiscent of The Twilight Zone. It rarely stumbles. The movie begins by throwing us right into the void of the unknown, right alongside the central characters as they emerge from the darkness to observe a crowded room full of strangers and attempt to gain their bearings. The stress of the countdown to death that happens nonstop throughout the film is palpable. The filmmakers manage to create tremendous tension through the simplest of devices.

It’s a bare-bones, super low budget thriller featuring a single location. With the exception of a small scene at the very end of the film, the characters never leave the room they are trapped in. The scenery never changes. Amazingly, the film is never boring…not even for a moment. There’s no slow buildup. Character development happens in the middle of the tension and the nonstop killing. The action starts so abruptly and moves at such a rapid pace that, 15 minutes into the movie I couldn’t fathom how the filmmakers were going to maintain the momentum and extend the plot to fill a feature length film. But, the longer things went along, the more twisted and compelling it got.

The film is almost entirely devoted to the drama that unfolds when the group of economically, generationally, socially, and religiously diverse people come to grips with the shared-responsibility of each other’s very existence. There aren’t any central characters, nothing to clearly differentiate the “good guys” from the “bad guys,” and it’s never very obvious when or why any of the characters will be struck down. What we have, instead, is something that feels very real…a bunch of scared, flawed, perfectly ordinary strangers. As an audience, we share the agony of their ordeal as we watch them struggle with the impossibility of singling out a sacrificial lamb every two minutes.

The film also plays on a number of relevant social factors like age discrimination, racial bias, class warfare, moral judgment, and debates over religion and how a person’s worth is determined. Meanwhile, as all the interpersonal drama heats up and deep issues are dealt with, the clock never stops ticking. There’s no breather for the characters or the audience. The film barrels forward at a savage page to an unpredictable and jaw dropping ending that manages to convey more about human nature than everything leading up to it.

It’s fair to call Circle a horror film, and it also works really well as a supernatural sci-fi thriller. But, ultimately, it’s really much deeper than that. It’s really about people, how they interact with and value one another, and what they do under the worst possible circumstances. It’s got that wonderful post-apocalyptic vibe, revealing the true nature of humanity when all the trappings of society are stripped away. It shows us, as MTV’s The Real World reality television show once touted, “what happens when people stop being polite and start getting real.” The film examines what makes us human and the lengths we will go to try to survive.

Circle is a highly surprising and exceptionally entertaining sci fi thriller. Nail bitingly tense and relentlessly fast paced, this unique and chilling tale keeps you guessing to the end, while offering brilliant insight into what makes us tick as humans and what we’re willing to do to survive.