If the deliciously over-the-top horror comedy “Thankskilling” isn’t part of your annual holiday tradition, now is the time to feast upon this cult classic. 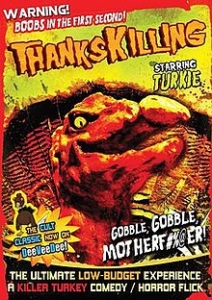 Thanksgiving is a long standing tradition, bringing families close together in the warm, embracing glow of candlelight. Vibrant orange, red and yellow colors parade like a cabaret of restless sentinels awaiting their rightful slots on the battlefield. Place settings are perfectly arranged, and silhouettes encircle the centerpiece in anticipation of joyful fulfillment.

Only one thing is missing…the poultry.

Thanksgiving is one of the few themes that the horror genre has yet to bombard. There is a finite amount of T-Day horror films floating around, yet there’s only one that fills my stomach to capacity. 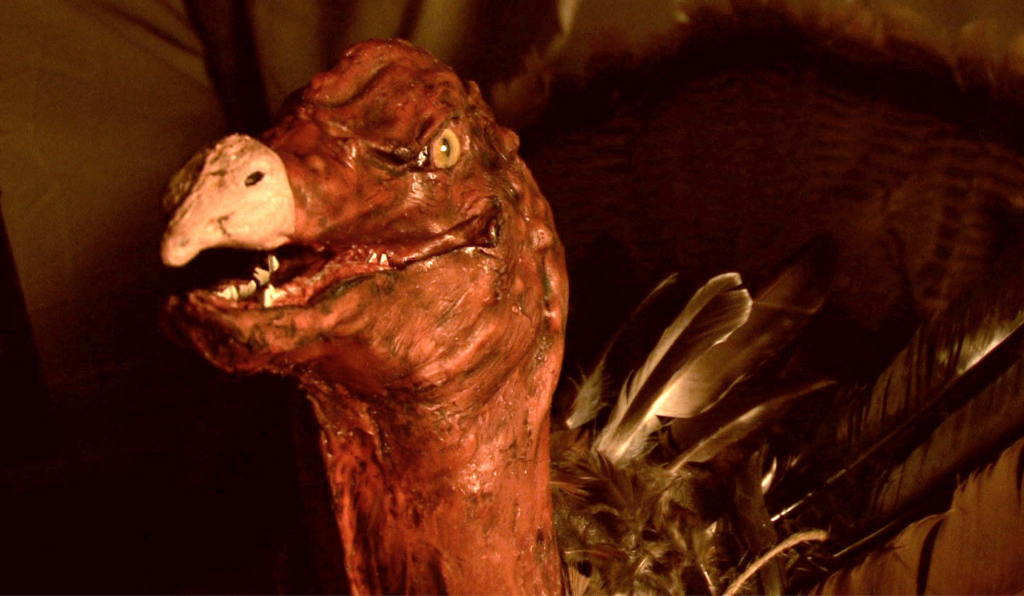 Food, happiness and horror intertwine in this, offering up plenty to be thankful for.

A group of friends return home from college for Thanksgiving, only to have their car break down in the middle of the woods. Stranded for the night, they make a decision to hunker down, and begin telling ghost stories around a campfire for a little excitement. However, one story captures their imagination; a story about a killer turkey with homicidal tendencies-which just so happens to be true. 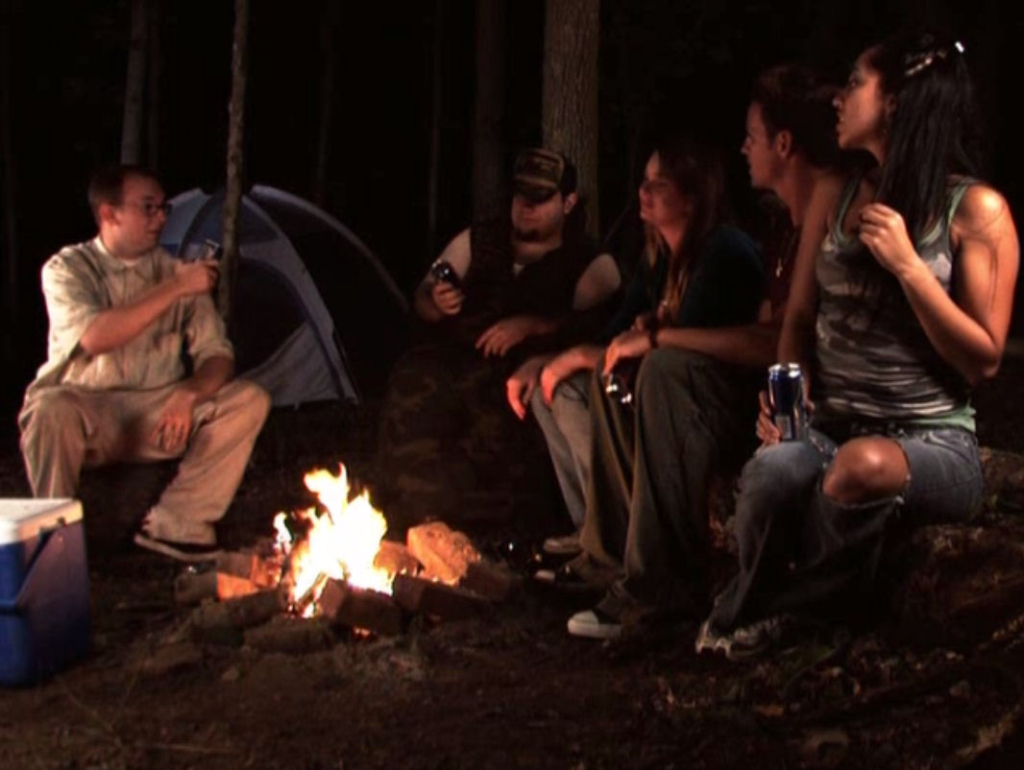 THANKSKILLING is pure lunacy, a spoof of nearly every standard rule applied to the formulated genre. It’s cheesy and blatantly foolish, spinning spools of perfectly sutured laughs like a tenured comedian. This film doesn’t pretend to be pretentious. It knows exactly where it fits, and because of this, it’s completely gonzo with a terrific balance humor and horror campiness.

Let’s face it, a murderous turkey who spits out tremendously hilarious one liners, and who carves up his victims in typical side splitting comedic fashion, is simply too good to miss. 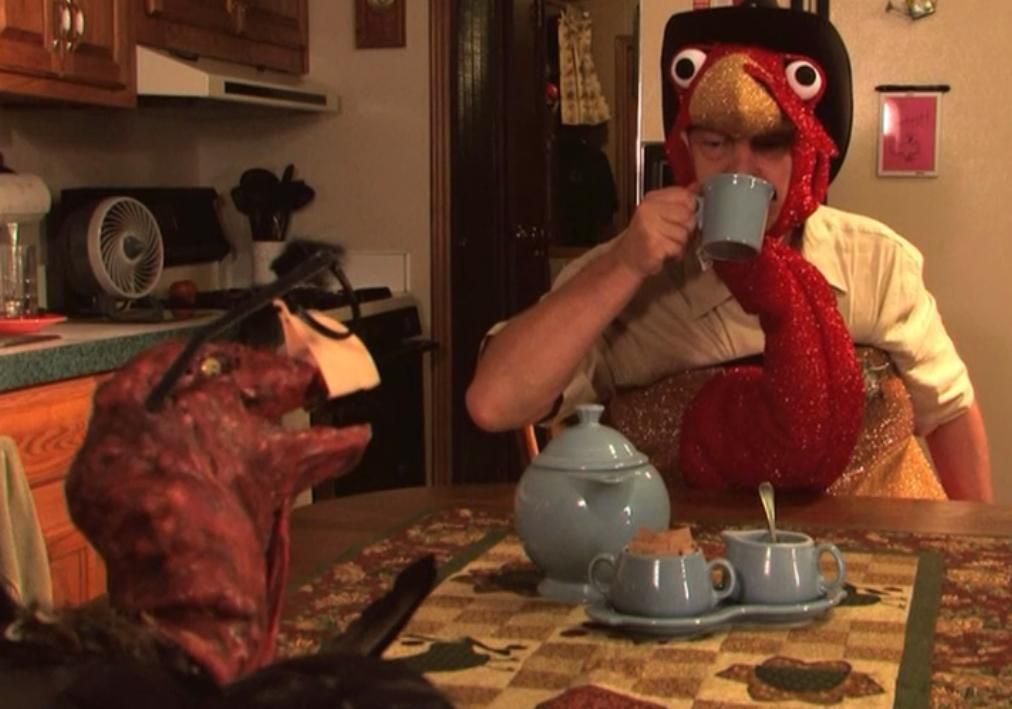 There isn’t one ounce of seriousness in this entire film, which it wears as a badge of honor. It’s not intended to be scary or realistic. Instead, it’s exactly what it appears to be. Wholesome, unadulterated insanity.

The first time I watched this film, I was totally determined to hate every single aspect about it. Yet, to my surprise, it was one hundred percent the film I was looking for to brighten my mood. Never did I think for one moment, that this would become my favorite Thanksgiving film. However, after filling my belly with plates of pleasure, this film elevated my mind set and had me rolling out of my chair laughing. 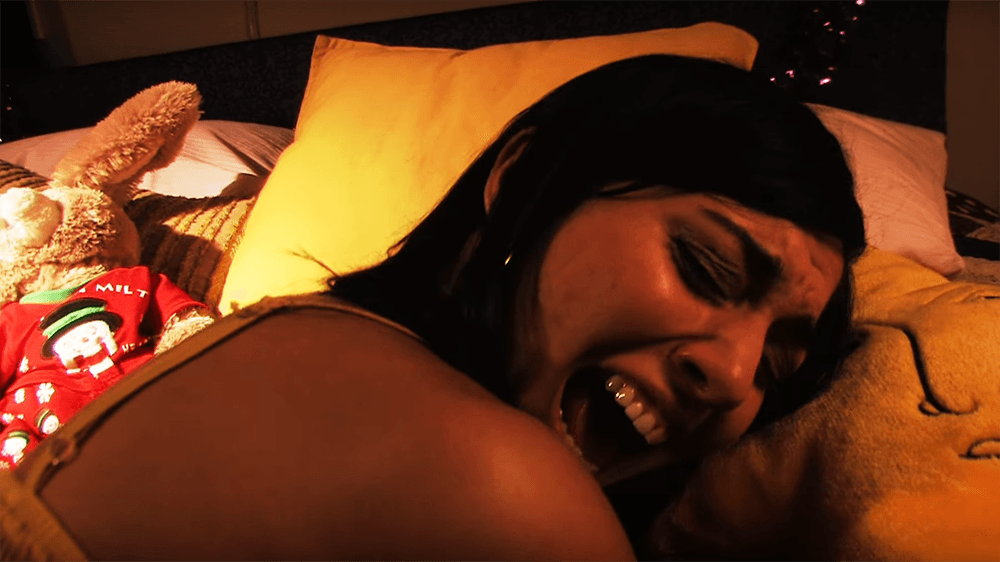 The acting in this is so horrifically awful, that it goes full circle and becomes exquisite. It’s not supposed to be red carpet worthy. Instead it’s intended to be so horrible, that it’s actually rather entertaining and somewhat interesting. The characters are your usual cliché assortment of horror film norms of course, which I feel incidentally adds to the B-film intended allure.

One thing I really liked about Thankskilling, was the practical effects and gore they used for the film. While they weren’t the best practical effects I’ve ever seen, they were definitely tailored to fit their desired outcome. I also thoroughly enjoyed the part where Turkie dons the face of one of the kid’s parents, a-la Leatherface-an aptly presented homage to the iconic slasher. That scene was specifically responsible for Thankskilling gaining a place atop my thanksgiving horror film list. 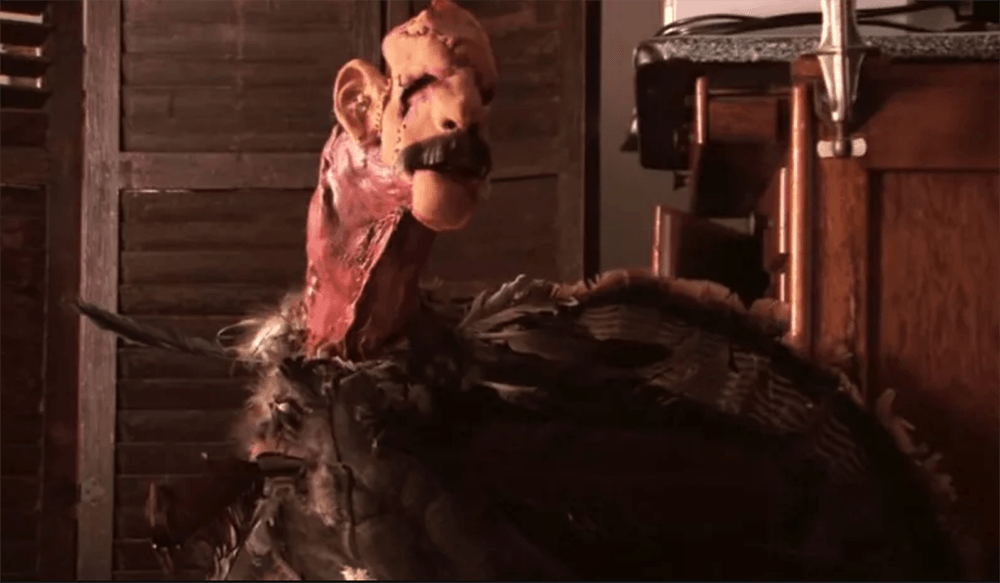 This film is completely original and definitely in a class of its own.

While there aren’t very many films that can pull off being so bad that they’re actually good, Thankskilling does just that. Hilarious and inverted, this film is like a bad surgery:  you feel better once it’s over, even though it continues to pick at you and you can’t stop thinking about it.

I give this film 1 out of 3 scratches for its intended laughs and arresting good time. 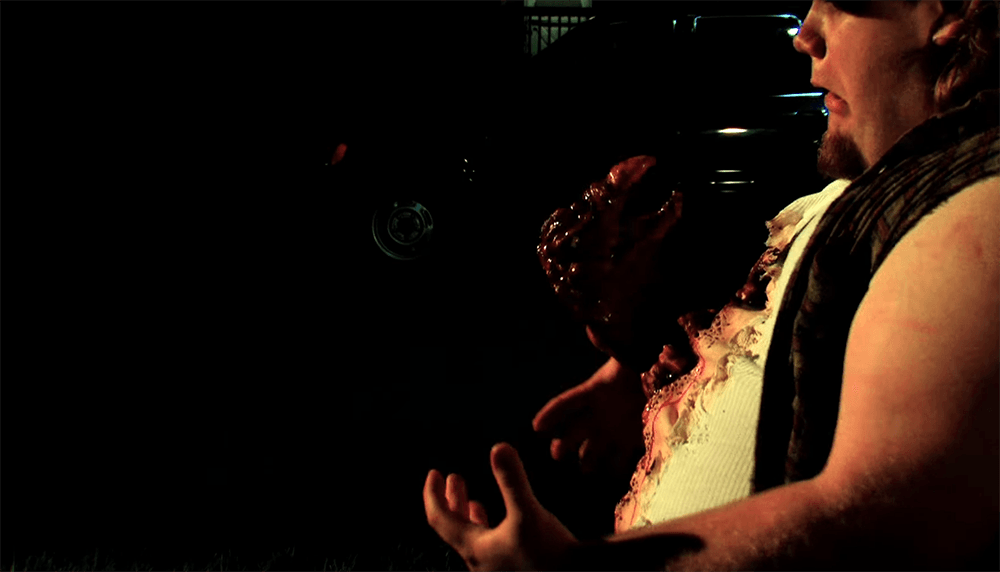 Overall, there were so many things wrong with Thankskilling, it ultimately lifted it into a cult like status. So, if you’re in search of a mindless, laugh piled good time, throw this in your player after you clear your plate. Just remember…enjoy, be safe, and have a Happy Thanksgiving!