We chat with master of horror Clive Barker about Hulu’s excellent adaptation of “Books of Blood”, along with the film’s director, Brannon Braga. 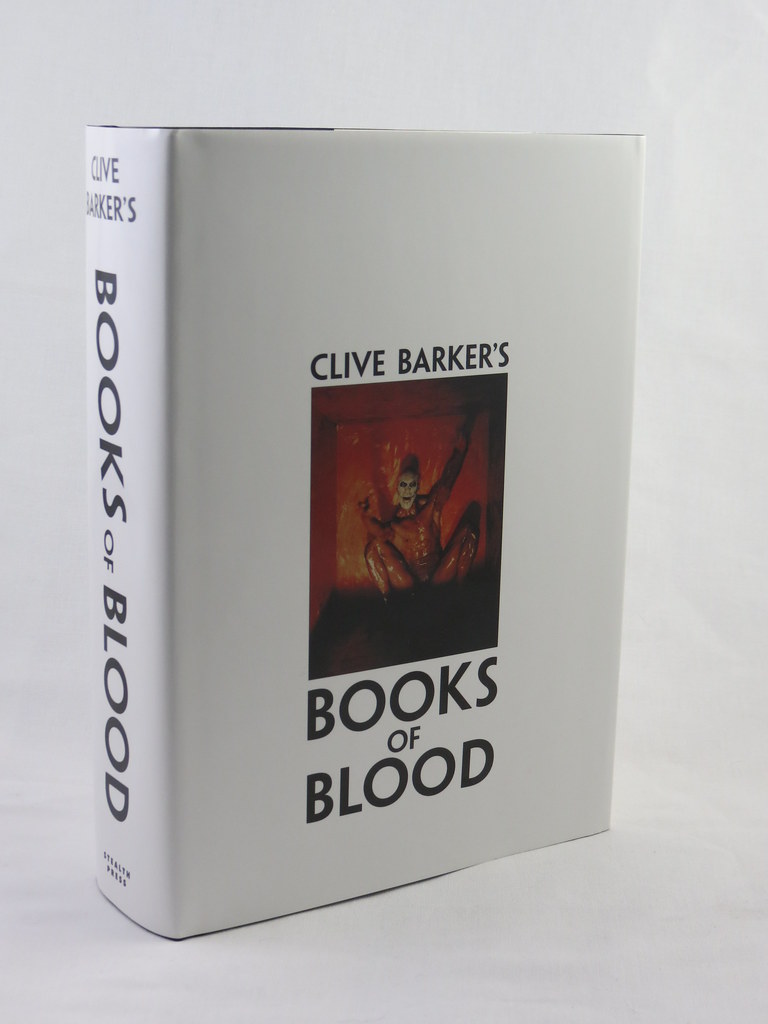 “Clive barker’s Books of Blood” by Travelin’ Librarian is licensed under CC BY-NC 2.0

In 1984, a young man by the name of Clive Barker released the first volume in a collection of short horror fiction, The Books of Blood. Hailed by critics and fans alike, winning both the British and World Fantasy Awards of that year, Barker went on to direct classics such as Hellraiser and Nightbreed, along with continuing to write powerful horror prose and creating coveted fine art pieces. Clive Barker is horror’s renaissance man, ultimately becoming one of the most influential icons in the genre.

Premiering at Los Angeles’ oldest horror-centric film festival, Screamfest, and debuting on Hulu, October 7th, Barker’s Books of Blood gets a new treatment courtesy of Clive and co-writers Adam Simon and director Brannon Braga. I had the immense pleasure of discussing Hulu’s Original, Books of Book, with Brannon and Barker ahead of its streaming premiere.

Anxious to speak with the duo, yet slightly tongue-tied due to a serious case of ‘fangirling’, Clive sensed my nervousness and helped break the ice by admiring the Pride flag on my book shelf behind me. I wanted to tell him thank you for being the horror hero that he is and for being the inspiration this queer horror fan needed in life, but I quickly vetoed this idea and stuck to the script.

Director and co-writer Brannon Braga, known for his extensive work on the Star Trek franchise, is no stranger to horror. 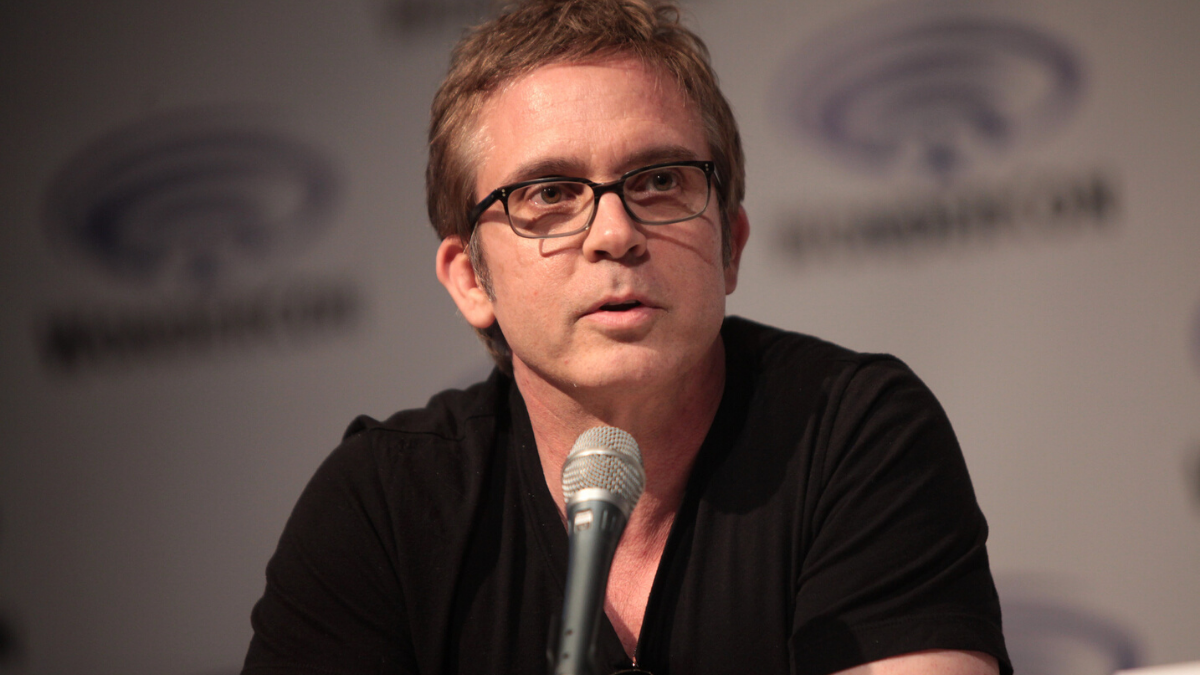 “Brannon Braga” by Gage Skidmore is licensed under CC BY-SA 2.0

Having once pitched a script for Freddy vs. Jason and helping produce the popular show, Salem, Braga has always had an affinity for the genre. I ask him what it was like to make a feature molded from one of the masters of horror. Without skipping a beat, he replied, “You can only imagine.”

He went on to explain:

“I tell this story about standing in line for two hours to get Clive’s autograph during his first American book signing, and I still have the book. And like everybody else, I’ve been a fan of this collection of stories for a really long time. I’ve fantasized about doing some kind of anthology release with it. Working with Clive one on one has been one of the greatest experiences of my life.”

Knowing this director came in as a true fan — of not only horror, but of Clive himself — was exciting to learn.

With this knowledge, I ask Mr. Barker what it means to him to have these volumes continue to stir audiences in both their written and cinematic forms; successfully finding a loyal legion of fans over the years. 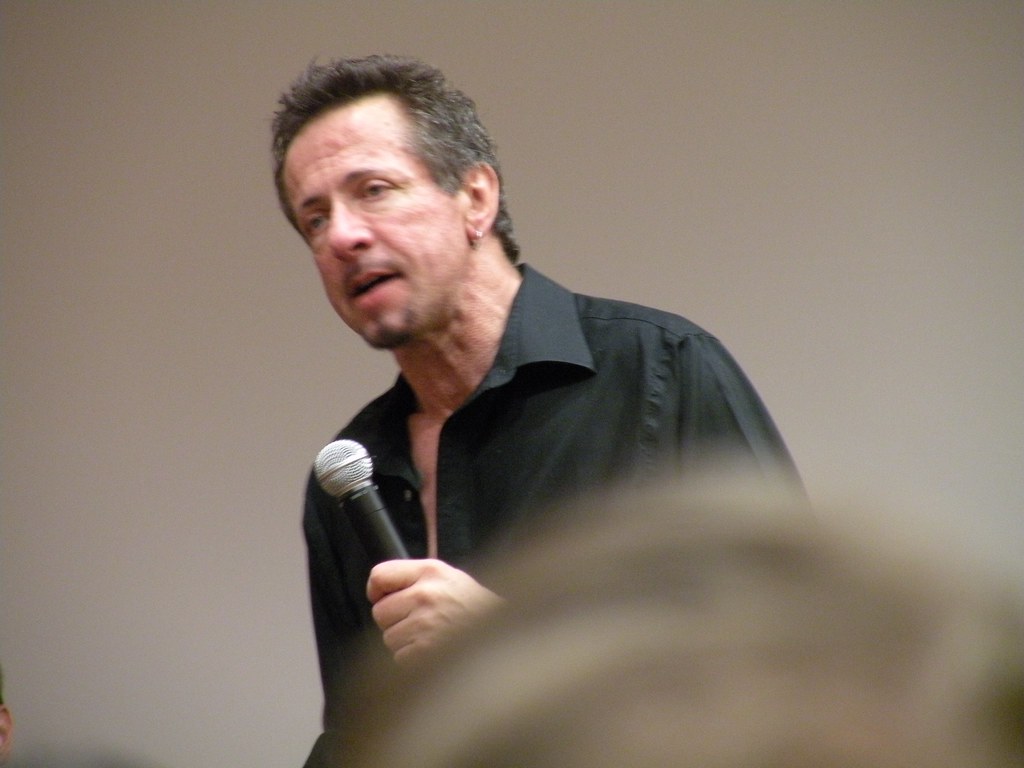 “Clive Barker” by Chris the Jeweler is licensed under CC BY-NC-ND 2.0

“It’s the ultimate feeling of having done something that works,” Barker sincerely replies.

“Increasingly, we live in a culture where things are disposable. Fiction is disposable. Stories come and go so fast. We have a President that tells us most of the stories we’re told are fake. It seems to me as though we should be able to find stories that mean something to us, and hold on to them. And it’s a pity that our culture has become so short. Short tempered, and short natured. The attention span of people seems to be getting smaller and smaller.”

“I write big books, and I write short stories, and I think the horror stories tend to work very well in the short form because they’re a slap across the face, frankly. The whole idea in a sense, is to shock people, and at the same time, and Brannon does this beautifully, seduce people. Part of it’s seduction, and part of it’s a slap, and that’s a good combination. He achieves that beautifully.”

I agree wholeheartedly with Clive here, mentioning I felt the same and sharing my fan approval of Brannon’s latest rendition of classic Clive.

With these two men being life-long horror fans, I decided to ask what their thoughts and opinions were on the state of the genre.

Scary movies have gone from the red-headed stepchild of Hollywood to the bread and butter of some of the most successful production companies and streaming services around. What is it about horror that transcends time, and continues to find a receptive audience?

Pausing a moment to reflect before answering, Barker replies:

“I think, in a sense, they’re fairy tales for adults. They’re moral tales for adults, fables for adults. And I think that like fables, like fairy tales, they bear repeating. Because every time a teller tells a tale, they tell it in their own likeness. Every teller, every storyteller, has the voice of their story resemble themselves in some aspect. So you never tell the same story twice. It’s like… Was it Socrates who said you never step into the same river twice? Or was it Plato? Maybe Plato. That’s common sense. You never step into the same river twice. It’s always moving.”

“I think when horror is at its strongest, it’s moving,” explained Barker. “And it’s moving into the intimacies of our lives, which are changing all the time. And there would’ve been a time when my noticing that you were gay, or you would not have mentioned your girlfriend, I would not have mentioned my boyfriend. And that’s changed. That is no longer something to be horrified about. What’s to be horrified about are the people who are not allowed to say those things.”

I take in Clive’s words carefully, tucking them away someplace special, then continue to ask for Brannon’s opinion.

“Well, thanks for your kind words about the movie, first of all. These are the first reviews coming in. Horror has always been an exceptional genre since the dawn of early filmmaking. It just hasn’t gotten the respect it deserves. It’s always made money. It’s always been there. Look at some of the greats.., NOSFERATU, one of the first great, truly great, horror films. And it’s still great. And the images in it still terrify, and it’s still influential. But it has been kind of like… never respected really. And now that’s changing.”

He adds, “And while I agree with you that we’ve been disrespected, if I had gotten good reviews on HELLRAISER, I would have never made another horror movie. The fact that they didn’t like the movie, I knew I was doing something right. When somebody likes you too much because you do horror, you’re not doing horror. You’re stroking people. Do you see my point?”

Hell, yeah, I got his point. I felt what he said in my bones! I go on to reveal that the first time I was introduced to his writing was in the legendary extreme horror anthology, Splatterpunks with his short, “The Midnight Meat Train”. He seems pleased with this and continues, “Not one of my subtlest stories. I always thought, when I came up with the Midnight Meat Train, I thought, ‘Well, yeah. That’s going to tell people it’s a horror story. This is not Winnie the Pooh.'”

I laugh and agree. “The Midnight Meat Train” could be viewed as an acquired taste; heavy on visceral terrors and holding nothing back from the reader.

However, with Braga’s interpretation of the Books of Blood, there is an effective blending of sub-genres highlighted with a stellar cast that should appeal to a wide audience — while still satisfying true horror fans.

Both thank me for my kind words, then Barker admits, “That’s young Brannon. Brannon’s instinct for this, obviously, is instinctive. I think people are either made to make these kinds of movies, write these kinds of stories or they’re not. It’s like, I’d be a lousy stand-up comedian because it’s just not in my blood.”

What’s in my blood is blood.

He continues, “I really like telling those kinds of stories, and Brannon does too. I look forward to doing the next one, you know? With Brannon.”

The two genuinely seem to have developed a wonderful rapport. Mutual respect and admiration for one another was very apparent during our conversation.

I then ask how the Books of Blood ultimately ended up as the feature it became, with Brannon explaining, “The creative decision was that the stories would work better in an anthological film format. It’s actually more challenging because anthological films are hard to pull off. The best one, in my opinion one of the best, being Pulp Fiction, which kind of tells these stand alone stories, but then angles them just so. Which is how we modeled Book of Blood.”

Barker chimes in to quickly add his final thoughts.’

“Yeah, what he did I think is, and I actually texted Brannon at one point, and said, you know, you’ve done something extraordinary here. This movie doesn’t have a hero. It doesn’t have a villain. It doesn’t have any of the conventional elements of a horror movie. And yet it is deeply horrifying. Deeply disturbing I would say. And he broke all the rules, and remade them in his own fashion. Which is what I tried to do in THE BOOKS OF BLOOD. So we had parallel experiences with his being cinematic, and mine was literary, and I think we’ve got something here which is a marriage of minds. A true marriage of minds.”

Thank you, so much to Hulu and to Brannon Braga and Clive Barker for their time. Don’t miss Books of Blood now streaming on Hulu!