Behind the Lens: Garo Setian (Automation)

We talk with Garo Setian about his feature film directorial debut “Automation” and how his background in trailer editing aided his directing duties. Earlier in December, Garo Setian enjoyed the release of his feature film directorial debut, a science fiction thriller called Automation. The film earned a highly positive review from Morbidly Beautiful, praising its fun and surprisingly heartfelt story as well the charismatic performance from Elissa Dowling. Given the chance to interview the director and editor Setian, I was more than happy to take the opportunity. Graduating from USC’s School of Cinema-Television in 1995, Setian has learned the art of editing in an interesting way, having edited more than 370 film trailers and TV spots.

We are excited for readers to learn more about Setian and encourage them to check out Automation, available now on VOD platforms and Blu-ray.

1. Congratulations on your feature film directorial debut! How did you come to direct Automation?

Thank you so much for the opportunity to discuss the film and thank you for the wonderful review! I’ve been an editor of movie trailers and TV spots for the last 20 years and attempted to make a feature many times over those years. And many times I’d experience the heartbreak of those films not happening. In all those cases we were seeking financing that never fully panned out. With Automation, my wife Anahit and I had come to a place where we could potentially finance a film, and we had many things available to us (props built by “Evil” Ted Smith, locations provided by my cousin Charlie Klinakis) that could add a lot of production value at no cost. So we decided to finally take the plunge and make it happen. The script was written around these things that already existed.

2. What was the experience like directing your first feature? What was an unexpected lesson you learned?

It was both exhilarating and exhausting. This was something I had wanted to do for so long, so it was a thrill to just be there doing it. But we were squeezing in so much in such a limited amount of time. For what we had we did a pretty amazing job, but it would be nice to have more money next time so we could have more time to prepare and more time to film the movie. 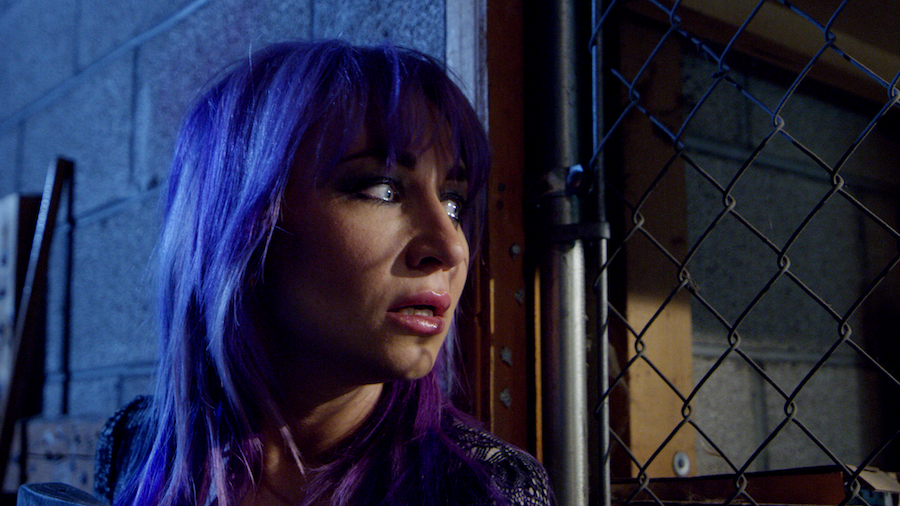 3. Automation has a very vibrant color pallet. How was that look settled on and what do you think it brought to the film?

It helped create a more light-hearted tone and we wanted the film to feel fun. We were working with an existing location that was a real working insulation company. And it was not exactly the most cinematic location, so it was decided early on that we would set the movie during Christmas so we could add lights and decorations. We wanted the film to feel warm in the first half, but when Auto goes on his rampage have things go more cold and dark. We did a lot more reds and blues in the third act. Michael Su is an incredible cinematographer and we had a lot of shots to get done in very little time. He and his team did a great job with our limited resources. 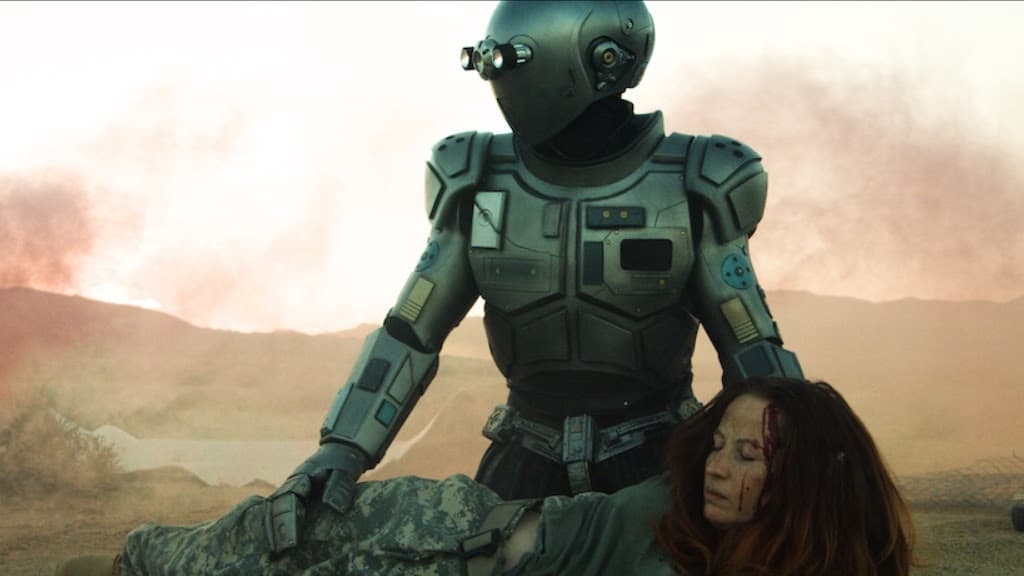 4. You both directed and edited Automation. When you have two roles like that, are you considering both at all times? Or do you separate the duties mentally? For example, keeping directing first while on set and focusing on editing when the day or filming is finished?

Editing was always at the forefront of my mind while I was directing. I believe it really helped us get what we needed within our limited time frame. If we had more time, I would have pushed for more elaborate set ups, but this was all about getting what we needed to tell the story. It’s funny, I cut the special features on the Blu-ray and there was some behind the scenes footage of me directing. And in one part we were running out of time, and I saw myself explaining to the actors and cinematographer how I was going to edit a particular scene so I only needed pieces of action versus entire sequences of it. In those kinds of instances, my background in editing really helped.

It also came in handy when we decided to do pick-ups six months later. By that point I had an edit of the feature with holes in it that we were going to fill in. So I had my laptop with me and I would show the actors and the crew the scenes before and after the new scene we were about to film so everyone had a good idea of where we were and where we were going and how it should all look. Those pick-ups were on a completely different location but it flows petty seamlessly with the original footage.

5. Elissa Dowling does a wonderful job as Jenny and brings a lot of much needed heart to the story about a killer robot. Was that the intent when casting her in the role? How did she get involved with the film?

Definitely. In order to sell the illusion that Auto was a real character, we needed a likable and charismatic lead to bounce off of him, and Elissa is naturally gifted that way. We had been friends for a long time and she was kind enough to help me out on another project that we tried to make several years back. It was a trailer for a movie that never came to fruition, but it did get me a Golden Trailer Nomination for “Best Trailer, No Movie.” She was so easy to work with and asked for nothing in return so when we had the resources to finally make a movie I really wanted her to be involved. So this role was actually written specifically for her.

We incorporated elements of her real life into the character of Jenny, including her talent for singing, and she really knocked it out of the park. I’ll never forget the first day we rehearsed a scene between her and Jeff Knight in the robot suit. It was their first scene together in the movie. And just seeing Elissa pretending to edit and having a casual conversation with the robot… it was just magic. There are always compromises when making a movie, but those scenes in particular played out exactly how I saw them when writing the script. 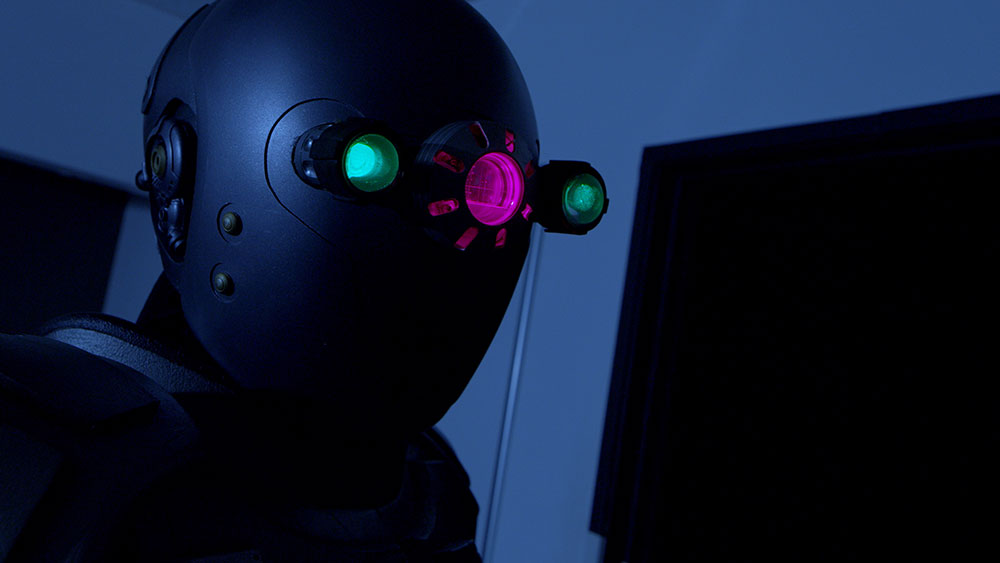 6. What are some of your favorite films? What is it about them that left such an impression on you?

I love science fiction, fantasy and adventure films. Things like Star Wars, Indiana Jones, Wizard of Oz, the works of Ray Harryhausen, Godzilla and Gamera movies. The original King Kong is still my all time favorite though. I love the spirit of adventure to it, and how they make you feel something for what was really an animated doll. Making the unreal real, and getting the audience to feel something for it is one of my favorite things movies can do. I wrote a whole essay on this in the book My Favorite Horror Movie 3: Scream Warriors. So that was a definite influence on Automation.

The character of Auto is a combination of what Rolfe Kanefsky, Matthew L. Schaffer and I wrote, Ted Smith and Robert Miller’s robot suit, Jeff Knight’s physical performance, Jim Tasker’s amazing voice, sound design, and the way other actors play off of him. All of these elements help turn Auto into a character onscreen that audiences will hopefully feel something for.

7. You’ve edited hundreds of movie trailers and TV spots. What’s the process like when putting together a movie trailer? How do you determine the best way to represent the movie in 2-3 minutes?

You just basically have to find the most compelling story or angle of the film and sell it on that basis. I’ve literally cut every kind of trailer imaginable from big Hollywood productions to low budget horror, to comedy, action, drama, romance, specialized indie features and documentaries. No matter what the film is or the quality of it, I always try to turn it into a must see event. 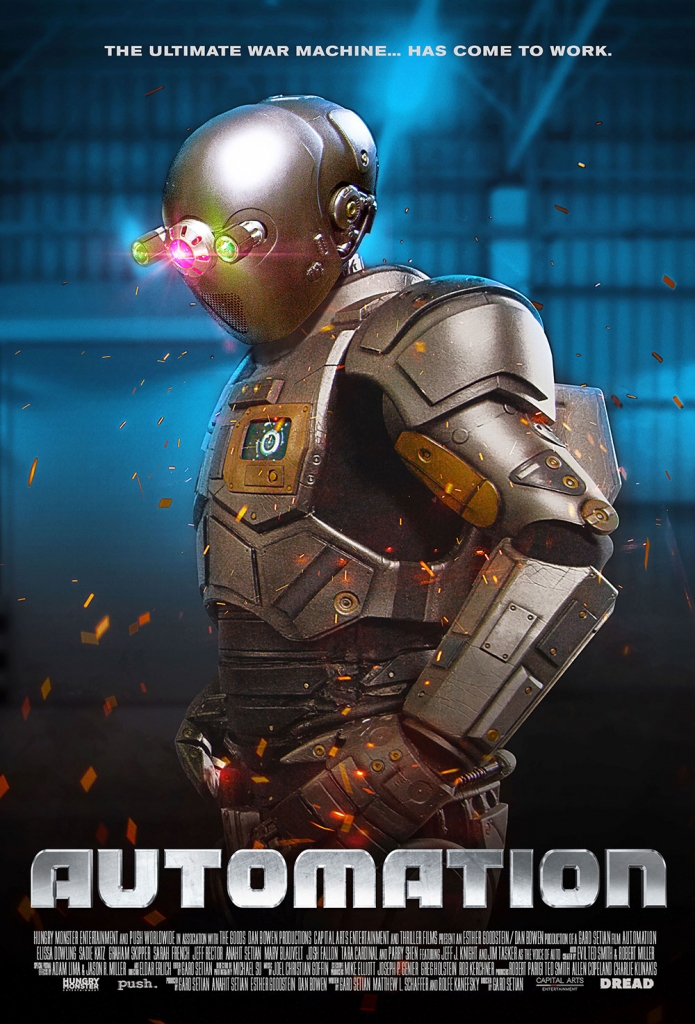 8. You’ve won 3 Golden Trailer Awards, which films did you win them for? I’ve always thought The Academy Awards should recognize movie trailers as well, what do you think about that?

That’s a fun idea! And as much as I would love to get an Oscar nomination for a trailer, it would probably be impractical. There are just too many potential categories of trailers and the Oscars are already notorious for running too long. Besides, the Golden Trailers are basically the Academy Awards for movie trailers anyway.

The awards I won were “Best Foreign Horror” for a trailer I did for The Eye 3, “Best Anime’” for a trailer I did for the Marvel animated Doctor Strange movie, and my proudest achievement was winning “Trashiest Trailer” for the movie Drive-Thru about a killer fast food clown. Over my career, I’ve actually been nominated for 25 Golden Trailers Awards including major categories like “Best Horror Trailer” for The Hatred, “Most Original Trailer” for The Voices and “Best Thriller” Trailer for Emilie. My trailers have also been nominated for “Best Sound”, “Best Voice Over”, “Best Original Score”, “Best Trailer, No Movie”, and “Most Original Foreign Trailer.” Last year I won my first 3 Clio awards for my home entertainment trailer for The Hitman’s Bodyguard.

9. What’s next for you? Any projects in the works that you can announce or would like to share?

I have another science fiction movie I am in the planning stages on. It’s something I wrote before Automation. A really high concept that I believe will surprise a lot of people. We’ll see what happens.

Our sincerest thanks to Garo Setian for taking the time to do this interview and to Exile PR for making it possible.