Interview with ‘Isle of the Dead’ star D.C. Douglas 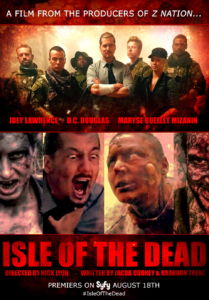 A new zombie thriller is about to hit the Syfy network this week! Brought to you by the producers of “Z Nation” and Sharknado, the film stars D.C. Douglas (Resident Evil, Z-Nation), Maryse Ouellet Mizanin (WWE Diva) and Joey Lawrence (Melissa & Joey).

The plot from their website: The story begins ten years ago, when an Army research post on a remote tropical island was decimated by a strange new virus. Now, a team of SEALS on a recon mission has gone missing on the island. When a Strike Team arrives to rescue them, they must deal with an onslaught of zombies. As they fight their way to the old lab facility, they realize that the Colonel in charge of the research station (D.C. Douglas) is still alive and still experimenting—the zombies are his creations, and every new wave the team faces is more vicious and ghastly than the one before.

Isle of the Dead began as a collaboration between actor D.C. Douglas and the creative team behind Alpha House. Douglas explains:

“While working on an Asylum comedy with Jacob Cooney and Brandon Trenz, I discovered that their real passion was zombie films! I told them I thought it’d be cool if we could come up with a zombie film that tipped it’s hat to the Resident Evil video games. They loved it, and so I went to the producers at Asylum and essentially begged. To my delight they green lit the idea and off we went.”

Since the movie premieres this week, I was lucky enough to get D.C. Douglas by email and get an interview. 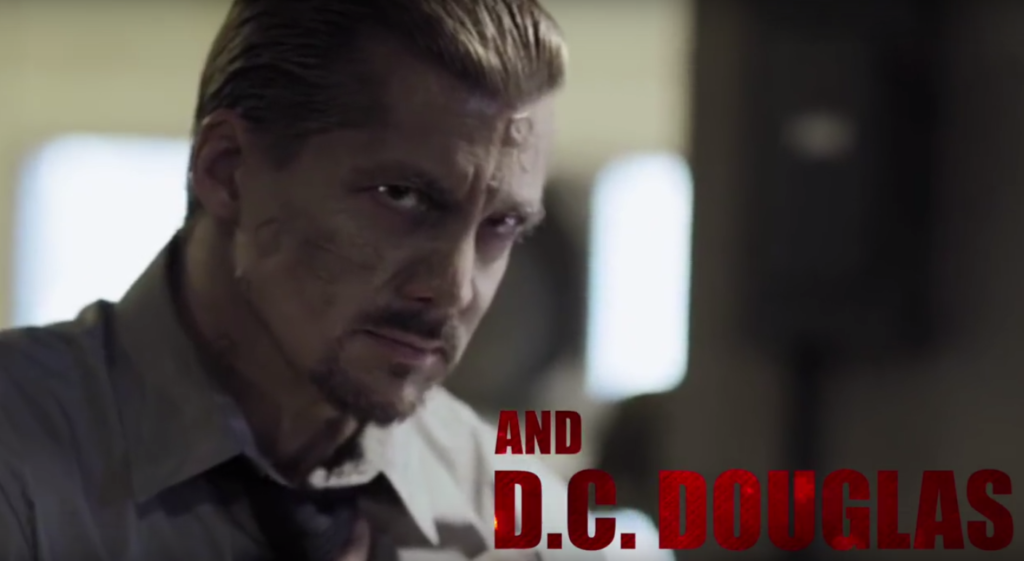 Los Angeles Zombie Girl: This is not your first zombie show with Asylum- What was it like shooting Isle of the Dead as opposed to shooting a TV Series like “Z Nation”?

D.C. Douglas: “Well, aside from Resident Evil video games, The Asylum is the only place I get to play with zombies! And first it’s good to delineate between film & TV shows produced elsewhere and Asylum Film & TV shows! Lol! I have been acting in film & TV for 30 years, and The Asylum is a world unto itself (I’ve done 6 films with them). I started with them back in 2000 when they were first forming. The shoots were very fast (5 days) yet long days. Essentially, they took the Corman model and spiffed it up with new technology. I hadn’t done one in several years, then in 2010 they asked me to play the captain of the Titanic. Lol! I was blown away by how far they had come. It’s still the Asylum, and every film is a new world and new mix of crew so there’s always rough edges and some chaos, but it had been mitigated greatly over the last decade. “Z Nation,” on the other hand, is one crew and one world. They still shoot crazy fast, but there is a calm to it because they have a home and an internal process that stay consistent.”

ZG: So did your role on “Z Nation” come up before all of this?

DC: Actually, they thought of putting me in “Z Nation” during the first pitch meeting once they saw I had a small but passionate fanbase (with Resident Evil). They cast me as Pa Kettle. I actually just finished two more episodes as Pa Kettle last week. They have been great about feeding my zombie hunger!

ZG: Was it just from your Resident Evil experience, or is there another reason you like zombies?

DC: “My love for zombies is first and foremost because of the fanbase I garnered doing the voice of Albert Wesker in the Resident Evil video games. But I also love them because the gore is almost black comedy to me. It’s removed once from the world I live in. It’s morally footloose and fancy free. You never hear people say they love genocide films. And if you do, run away!”

ZG: You had a very short shooting schedule for Isle of the Dead. What was that like and what were your challenges?

DC: “I’m used to fast shoots as an actor. I’ve been in all levels of productions and have produced several shorts myself. I was also an editor for ten years as a survival gig. All that helps me be patient as an actor on a crazy set. The biggest challenge for me was to let go. Because I pitched the idea to Asylum and worked with the writers for a year through the development (where we went huge with budget and concept and then were told to bring way back down to a small budget film – yikes) I was too invested as the Resident Evil video game fan representative. But having a huge 4-page monologue that was switched to the first day of the shoot laser focused my ass fast!”

ZG: What was it like working with the cast?

DC: “Absolutely a treat. Joey was kind and professional, yet always throwing in some fancy dance moves between takes. And Maryse is the sweetest! So very open and giving as an actress. And she has a great attitude. This was her first lead role and she tackled it with the same conviction she does her with her opponents in the ring. Did I mention she’s gorgeous?”

ZG: Did you have any favorite moments during the shoot?

DC: “I’d have to say hanging with Maryse Oullet and the makeup team. Maryse is a freaking sweetheart with a quirky sense of humor. I really enjoyed being around her. And the make-up team was the bomb! I spent a lot of time in the chair with them every day and they were just a joy to chat with. And, when things got crazy production-wise, they were calm and professional. Truly a lovely and creative team.”

DC: “There is one funny thing. I tend to get hives and idiopathic angioedema (swollen lips) from huge stress. Well, after 8 days in a row I had a day off. That’s when I relaxed and got hit with a huge fat lip! I was so pissed, but then I realized my last day was just me as a zombie! Then I thought, “That’s right. I just added to the zombie make-up, baby!”

Isle of the Dead premiers Thursday, August 18th at 8 pm PT on the Syfy network. The cast and crew will also be live tweeting the premiere using the hashtag #IsleOfTheDead.