“Two souls within one child that is to be our savior.”

L. Gustavo Cooper’s long awaited tale of prepubescent possession is finally upon us. 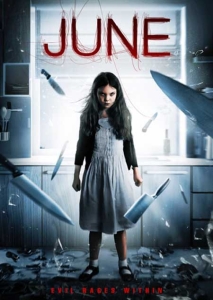 I’ve followed Cooper’s career with quiet admiration for some time, waiting for him to get the opportunity to show the world what he had to offer. He was notably marked in my Book of Memory the second I saw his spellbinding 2012 short film Velvet Road. It’s honestly one of THE best short films I’ve ever seen. Superb acting, engrossing storyline, and technical achievements which are off the charts. I didn’t want it to end. So I set out to learn more about this talented, up-and-coming director. What I found out was quite impressive.

Cooper grew up in Florida and has an immense talent at skateboarding. Actually, he probably could’ve followed this gift and had it flourish into a career as a multi-sponsored professional, but as fate would have it he instead chose to pick up a video camera and start filming himself and his fellow skaters. This led him to discover his trust passion as a filmmaker. 2015’s JUNE is Cooper’s second feature film (his first was The Devil Incarnate, formerly titled Copiii: The 1st Entry, released nationally on DVD October 2014), based on his short film of the same name. He also co-wrote the film with Sharon Y. Cobb.

Like any good possession tale, it begins with a creepy coven-like gathering in the forest. An infant is involved in what is an obvious sacred and timeless dark ritual. Some shit ensues. Nine years later we meet a sad, lonely, and orphaned young girl named June (Kennedy Brice). You cannot help but feel for her. Brice has the “please take mercy on my misunderstood and unloved soul” look down! “Many don’t know what it’s like to be desperately alone…we have that in common,” shares a woman’s voiceover. June is freckled and fresh faced and, while she appears innocent and passive, violent unforeseen circumstances present themselves when her ‘imaginary friend’ Aer (she pronounces it Air-ee) makes her presence known. June’s eyes flood into a blood red hue when Aer has taken control over the small frame of her body. 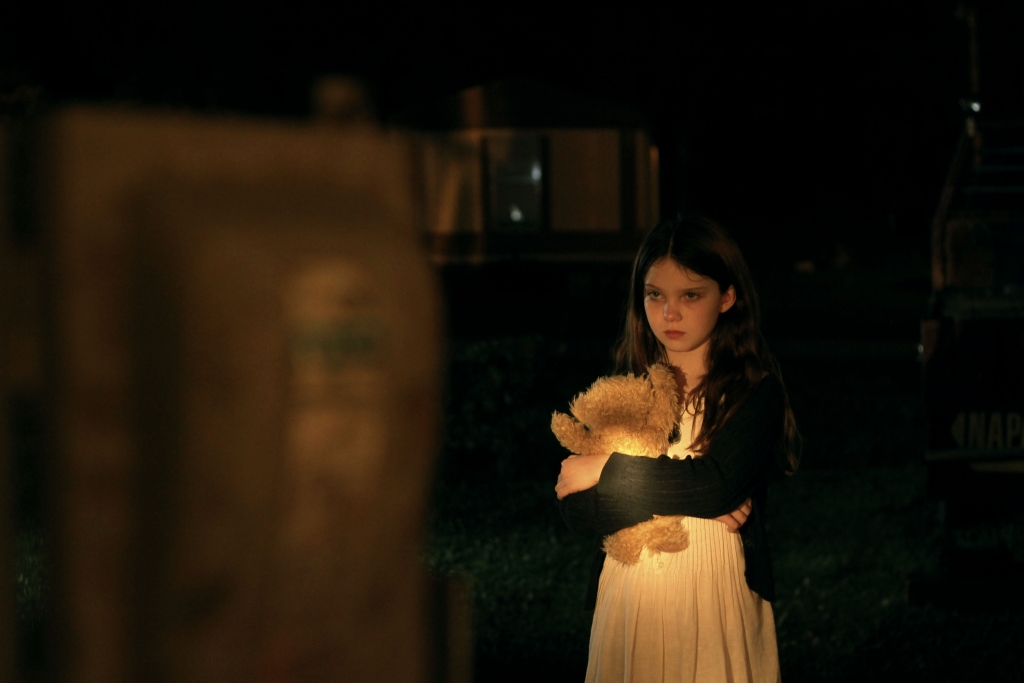 With these outbursts, which June cannot control, she obviously has trouble gaining a permanent home within the foster system. Constantly being shifted from home to home, often mistreated and never understood, she easily becomes the target of bullies (sidnote: Brice is an anti-bullying advocate in real life). Most recently, June has been placed within a subpar, in every sense of the word, Rebel Proud trailer trash home. A seemingly caring and compassionate Case Worker, Mr. Emmanuel (Eddie Jemison) promises to get her out and place her with a loving, caring, and safe home. During this visit, Mr. Emmanuel reveals he knows what happens ‘when she gets angry.’ June looks up at him as if relieved to find someone who understands her. Unfortunately, however, it isn’t long before taunting children and uncaring adults cause a Sonic Boom Dragon Ball Z-like event.

“The ashes of Man will reign down,” exclaims Aer. As helpless June feebly attempts to subdue her inner demon, Aer replies, “You are my vessel, before people, before machines, there was only us.” Creepy. As. Hell.

A welcoming and loving new home await June with the Andersons, Dave (Casper Van Dien, who also serves as the film’s Executive Producer) and Lilly (Victoria Pratt). It’s ideal for the young lady, a real Norman Rockwell kind of existence…her own room, a garden, loving and doting parental figures. But we are left wondering, despite this wonderful placement, if Mr. Emmanuel has nefarious plans. He is heard speaking with a mysterious man on the phone regarding June’s well-being and whereabouts.

While at first little June is shy and quite introverted in her new surroundings, the overwhelming need and want of the Andersons to be great parents help coax the carefree child out of the troubled youth. And just as it seems like all of June’s worries will be assuaged, her first day of school is a doozie. A rush to the emergency room, coupled with an ominous nightmare, leads to a swift derailment of whatever progress Lilly and Dave have managed to make with June.

As Brice nails the loneliness, Pratt gives a believable performance of an eager and loving mother figure. Casper Van Dien is solid as the supportive husband and father. We learn the couple has chosen to adopt due to the unfortunate loss of their own child, which Lilly blames upon herself. Serious marital strife occurs when Dave quickly becomes aware June is different, and that he and his wife may not be equipped to properly ‘deal’ with a child suffering from such severe emotional issues. Enraged, Lilly kicks Dave out of the house and, while he’s away, the mother and daughter develop an important bond. Meanwhile, Dave spends his time trying to piece together the puzzle that is June. What he discovers is shocking and unexpected, leading to a race against time to save his family.

The final sequence is not trite or happy or expected, which I absolutely loved. Through and through, I really enjoyed this supernatural tales which pays homage to thrillers of days past. Everything worked for me, from the score to the wonderful overhead Kubrickian shots that Cooper so flawlessly masters. His technical skills as a filmmaker are on proud display here. Aer commands you to see this film.

A supernatural tale of pint-sized possession, L. Gustavo Cooper’s sophomore film JUNE strikes all the right chords. Creepy and unsettling with heartbreaking undertones, this is a solid and stylish film from a talented up-and-coming director.