The once and future queen of final girls gave us so much more than a hero to root for; she taught us what it meant to fight and survive. 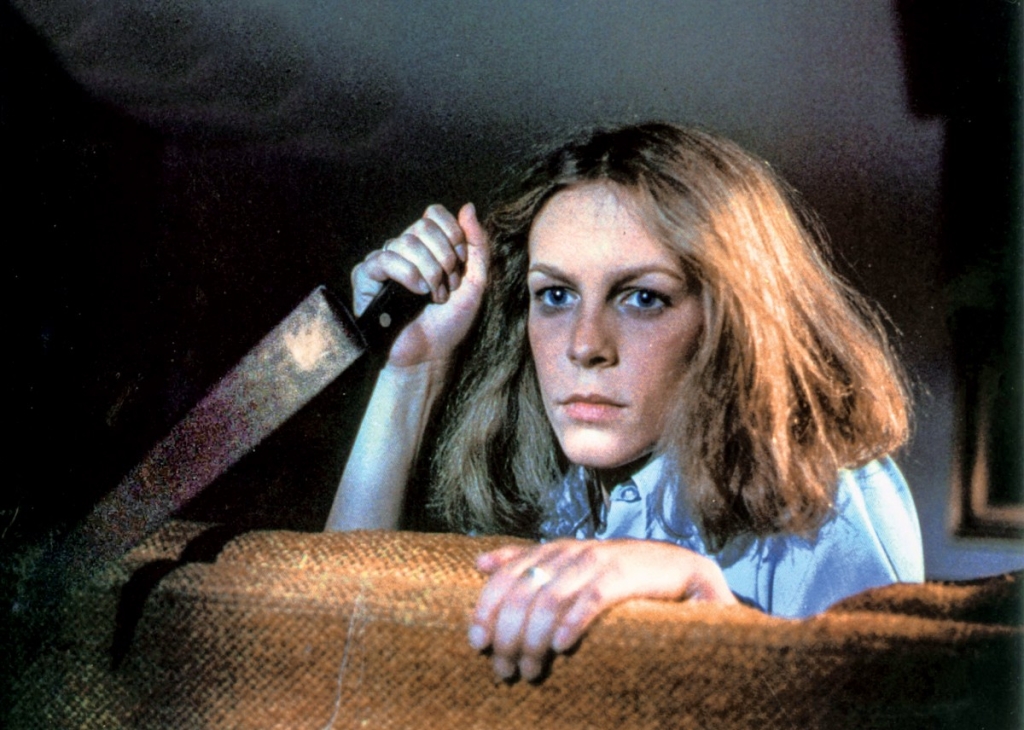 SPOILER ALERT
PLEASE NOTE: This article contains significant plot spoilers from Halloween Ends and a bit from other films in the Halloween (2018) trilogy, so please do not read this article if you have not watched the film(s) yet and/or you do not want any spoilers.

I had never thought about who my favorite final girl was before. Then, when I really sat and thought about it, I realized that it was none other than Laurie Strode (played by Jamie Lee Curtis).

When we first meet Laurie Strode in the 1978 film, she is just an innocent and sweet-natured teenage girl. She has no idea what evil is waiting for her or what horrific events will forever change her life on Halloween night. It’s on the fateful Haddonfield Halloween that she is stalked and attacked by Michael Myers. While she barely escapes with her life, many of her friends are brutally murdered, leaving a young Laurie forever traumatized.

Now, depending on which timeline in the franchise you follow, her fate after that night in ’78 is up for debate. For the purpose of this discussion, we’ll assume the plotline adopted by the recently rebooted Halloween trilogy from David Gordon Green.

According to that timeline, Michael is caught and locked up following the events of Halloween night, 1978. In this version of Michael’s backstory, he had no motive or reason for killing Laurie’s friends and attempting to kill her. He just did it because he is a soulless killing machine. Green’s Michael is simply the embodiment of pure evil, and Laurie is one of the only people in Haddonfield to understand this.

40 years after the events of that horrific and traumatizing night, Laurie is seen as the crazy woman in town.

She has spent the last four decades preparing for Michael’s inevitable return by living in a “fortress” type house to protect herself and learning to shoot guns, as well as forcing her daughter, Karen (Judy Greer), to learn to shoot so that she, too, can protect herself from the Boogeyman.

Inevitably, Michael returns to Haddonfield, but rather than run and hide, Laurie stands her ground and prepares to fight. 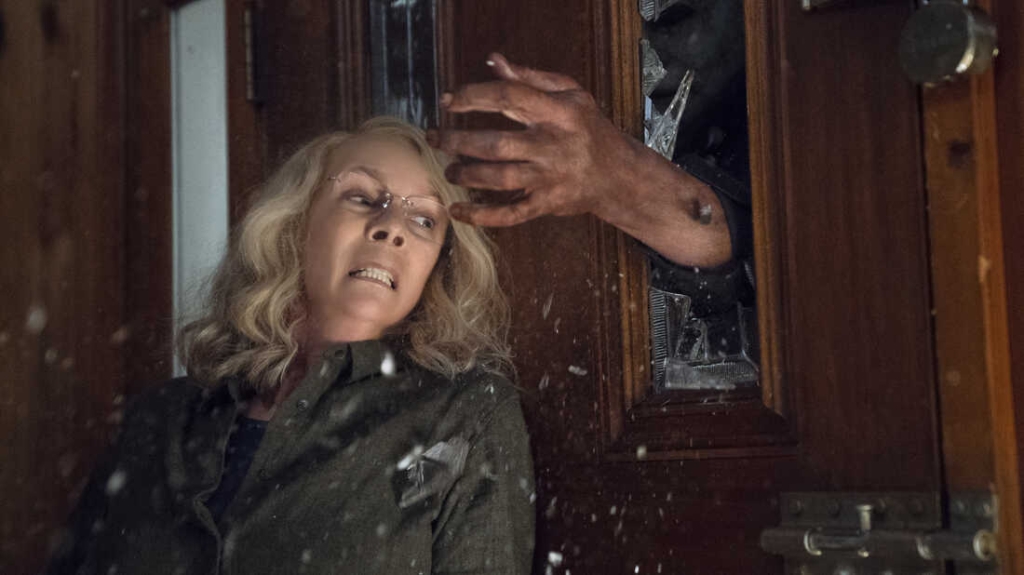 She is determined to save her daughter, as well as granddaughter, Allyson (Andi Matichak), from Michael.

Michael cannot be stopped easily. As the embodiment of evil, it seems he gets his power from people fearing him. So, when the town folk get together and decide to try to kill him mob style in Halloween Kills (without Laurie there to aid them since she is in the hospital recovering from Michael’s attack), they all fail. Miserably.

Laurie is doing her best to live a normal life. No more fortress, no more guns; just a normal and happy life. Her past still haunts her, as many people in town still see her as crazy (despite her being right about Michael). Others say she provoked Michael Myers, which is why he returned to Haddonfield to kill those people (talk about victim blaming).

When evil takes a new form in the shape of a new character, Corey (Rohan Campbell), Laurie knows that she must stop him before he kills too many people.

Here’s the problem, though: her granddaughter, Allyson, falls for Corey, and as we saw in Karen, thinks that her grandmother is being paranoid about her fears of Corey being evil.

Laurie is able to defeat Corey, but Michael makes his return once again.

This leads to the final climactic showdown between Laurie and Michael, the one we’ve all been waiting for. 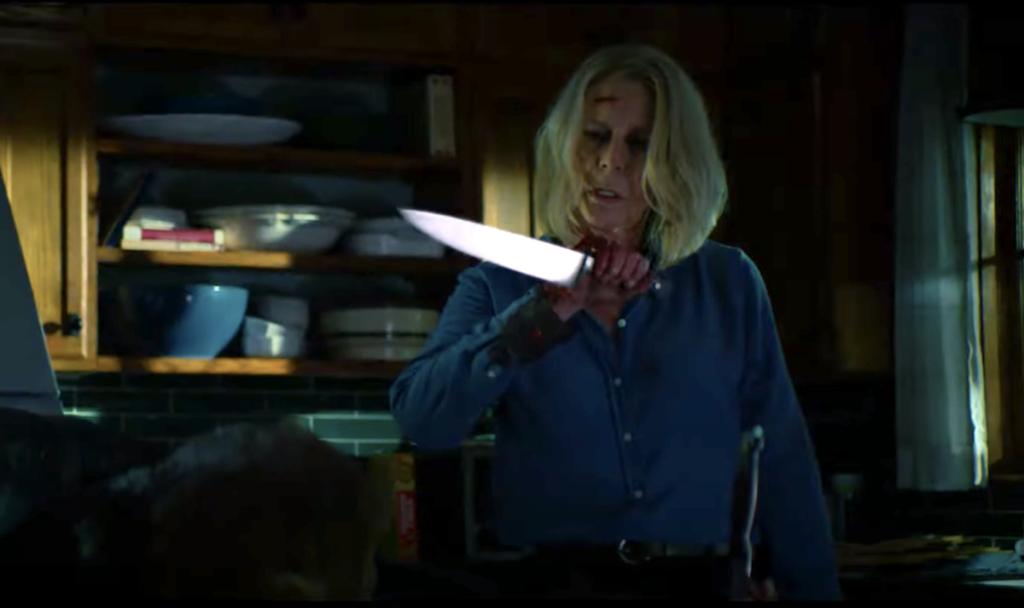 Laurie manages to pin Michael to the kitchen counter, where she starts to bleed him. Then, just as we think we can finally be relieved for Laurie’s safety, Michael shoots his hand up and begins to choke Laurie. Thankfully, Allyson saves the day, and Laurie is able to escape Michael’s deadly grasp.

Although Michael seems dead, Laurie, and everyone in town, know better. So, they take matters into their own hands and finally kill off the murderous embodiment of evil once and for all.

I know that not everyone appreciated the latest Halloween trilogy, but personally, I loved it. It wasn’t just because we got to see Michael Myers again and see some brutal kills, but it was because we got to see the story of Laurie Strode finish in a satisfying way — bringing her real resolution.

It’s hard to call what happened a happy ending, but it was a cathartic one this fierce final girl deserved.

Laurie carried that trauma with her for so long and was terrified of Michael Myers. She could not allow herself to move on from the events from that night or even allow herself to heal even a little bit. In the end, however, she could face her fears and finally kill the boogeyman — not just literally but metaphorically, too.

I think that Laurie Strode taught me that it is okay to kill off our own “boogeymen” in our lives.