“The Love Witch” is about a woman who uses witchcraft to gain love, which explores themes of relationships and society’s gender role expectations. 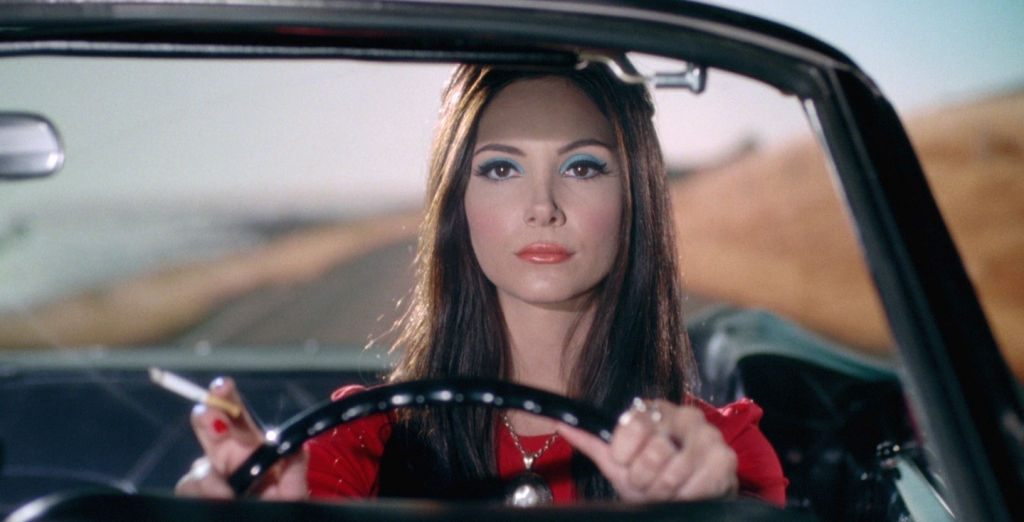 The Love Witch centers on Elaine, a lovelorn newly-converted Wiccan, who moves from San Francisco to a small Californian town to escape the memories of her past, including the death of her ex-husband and assorted previous romantic involvements.

The story begins with Trish, an interior designer friend of a friend, who shows Elaine an apartment that belongs to their mutual friend Barbara. The two begin a slight friendship — discussing marriage and men and dating and expectations in romance and marriage. Here, the film introduces us to Elaine’s somewhat childish expectations; she sounds like an eight-year girl discussing her romantic fantasies, while Trish gives a more adult and reasonable account of love and marriage. However, Elaine meets Trish’s husband, and something attracts him to her. He later acts on this and pays the price, a hint to Elaine’s true intentions. 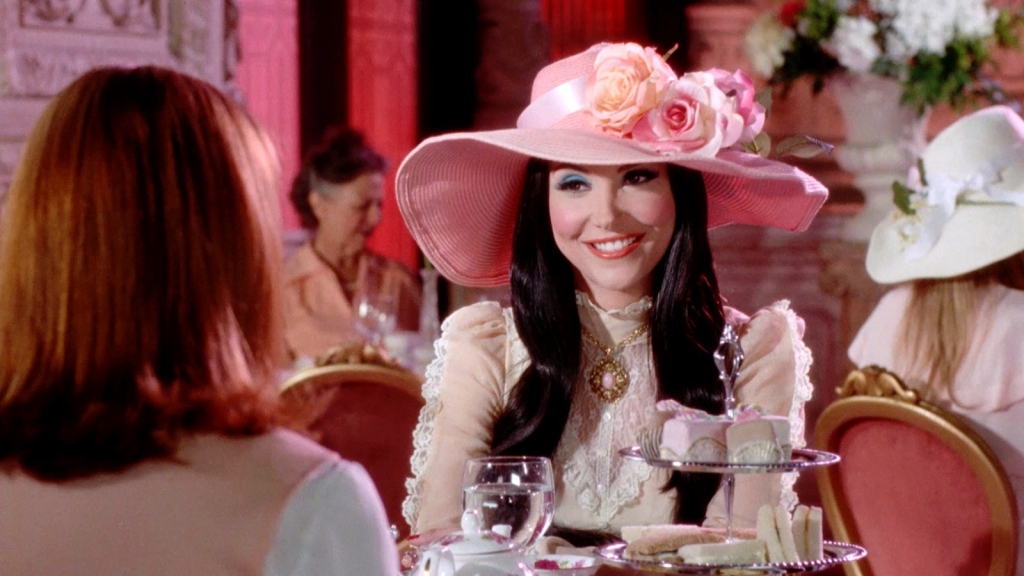 Eventually, Elaine begins affairs with other men, including Wayne, a local college professor, whom she lures into an invitation to his cabin for some sex. Creating a magical potion to make Wayne love her, the fun ends when she wakes up the next morning to discover he has died from heart failure. Undeterred, she takes him and buries him in the woods, with little fear or worry over the disposal of his corpse near the isolated cabin.

Elaine acts as though she buried a fish and drives back to town — starting up relations with other men, including a detective assigned to investigate Wayne’s murder. Elaine later meets with her witch mentors, Barbara and Gahan, for ceremonial meetings. At the same time, the police begin to investigate Elaine’s past, discovering dark and disturbing evidence. The evidence piles up, eventually leading to a tragic end, as we unravel the truth of Elaine’s background and dark past. We come to see the totality of her actions and how they destroy her life and the lives of others around her. 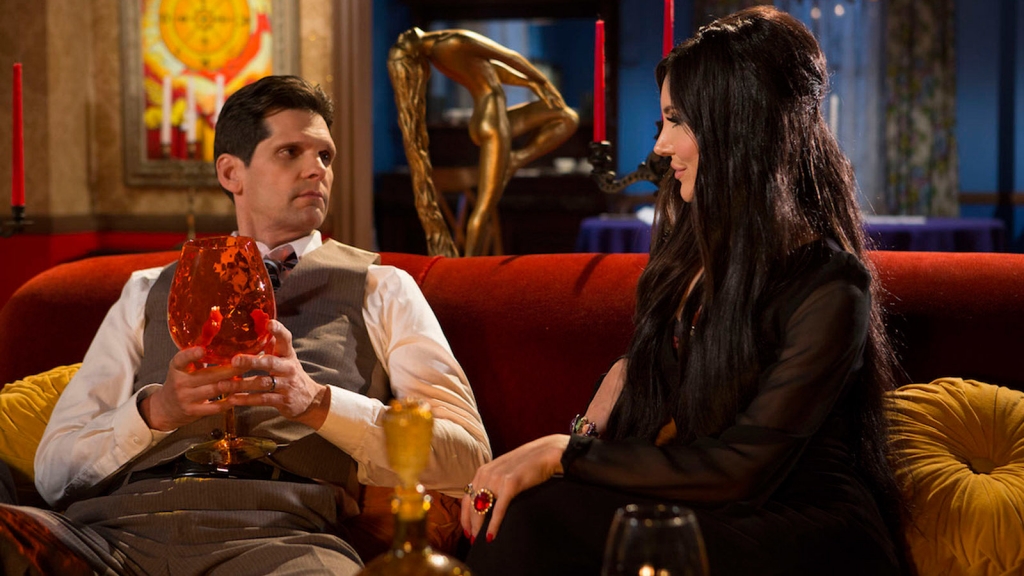 Anna Biller is a filmmaker, much like Quentin Tarantino, with a very distinctive and memorable visual style — and The Love Witch looks incredible.

Biller poured her heart and soul into this film, which she wrote and directed. She even designed the costumes and set pieces, giving the film a bewitching Suspiria-like aura. The tea room scenes are stunning, with vibrant colors and costumes that stand out like an English period film from the Victorian era. One can discern that director Biller spent oodles of time on the clothing, while infusing every scene with distinctive colors and items chosen specifically to reflect the desired modern fantasy feel.

Although it’s set in modern times, the actors all dress in highly stylized wardrobes reflecting the fashions of the 1960s/70s.  While characters zip around in modern cars from our era, they dress like they are in a redux of The Stepford Wives. Elaine (played  by Samantha Robinson) is a living fashion doll. She looks stunning in her constant wardrobe changes — from baby doll dresses to sexy lingerie — and her makeup is classic Dita Von Teese, burlesque stylized. 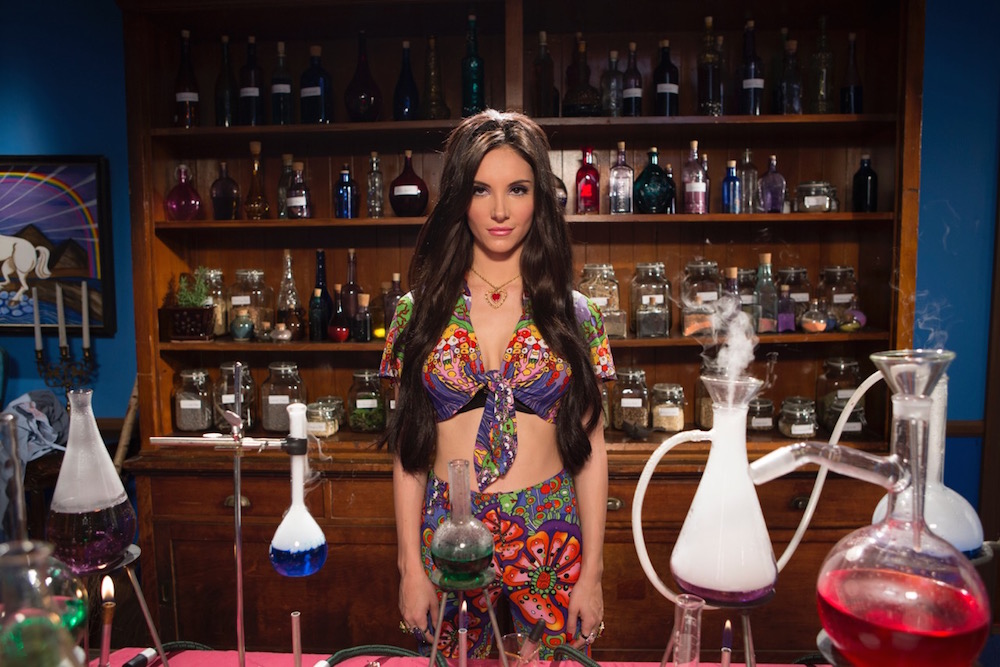 This is not a Disney film about princesses and white knights. This is a film about how all the men in a woman’s life tormented and damaged her psyche. This leads her to accept the tenets of witchcraft — using it in her now demented mind to make a fantasy version of love. But even when she receives absolute love, she destroys the man giving her love.

In The Love Witch, Biller attempts to use a satirical example to examine old stereotypical beliefs about gender roles and the different expectations of love and relationships. She explores the idea that a woman is taught to expect a mythical male to care for her, accepting that men only want a woman who is a willing sexual being. Thus, intelligent women accept this quid pro quo, using male desire to her advantage so she can get what she wants. In other words, it’s the idea that if you give men what they truly want and care for their sexual needs, you’ll get the love you crave in return.

It’s this model of love that Elaine becomes addicted to. The film uses serial killing as a metaphor for serial dating/love addiction. 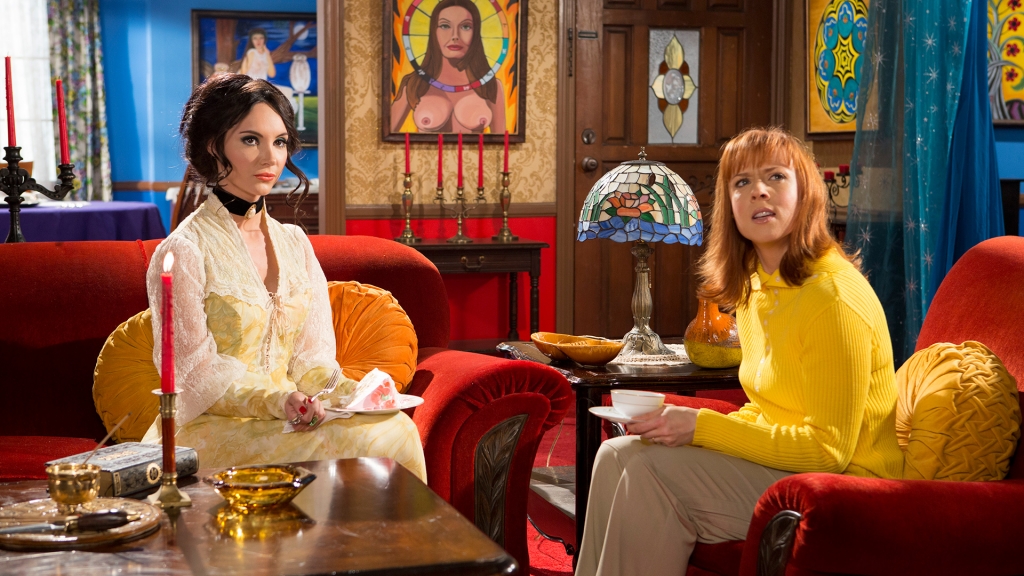 The Love Witch turns the table on serial killers, who are almost always males trying to satiate their deepest secret lusts. Here, we have a film centered on a woman who battles sexism, objectification, and gender bias in her effort to gain equal footing with men and relationship expectations. Her warped view of reality sends her hurling towards a twisted fairytale ending, worthy of a Shakespearean finale.

The film is not flawless. Some of the acting is a bit stiff, and the dialogue sometimes makes the characters sound like cardboard cutouts form a high school play (Detective “Griff” had acting issues). But the film quality and the film’s aesthetic — including costumes and set design — was superb. I would be a fool to refuse Biller’s style suggestions on any a wedding or even a birthday party. Her eye for detail and visual style helps transform every scene. She also knows just when to let the camera linger to increase the impact of a scene, or to use well-timed close-ups to convey the urgency of the characters.

The Oscars failed to find this film, but The Love Witch really spoke to me. 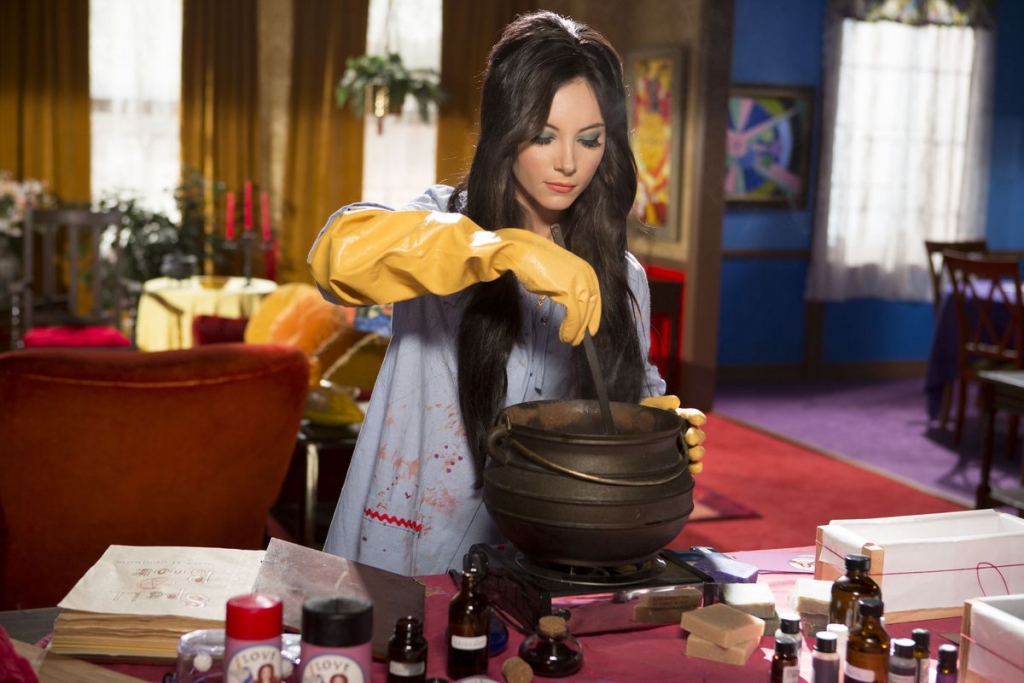 It gave me a peek into a window where the cogs of society break down under the influence of supernatural powers. I loved Biller’s expert film editing. While it lacks the gore or terror of your typical slasher film, it’s an intelligent case study into the mind of a psychopathic killer.

The theme of the film leaves you smirking, but simultaneously feeling sorry for the lead character. Even with her aggressive approach and influential powers, she still can’t find true love. Sadly, she’s just not capable of it — a monster constantly fighting lesser beasts. In the end, she may best be described as a modern day Prometheus, created to survive in this world through destruction — destined for a tragic ending.