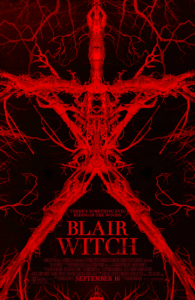 We recently reviewed an early screener of the highly anticipated indie horror film, Blair Witch, the long overdue sequel to the 1999 found footage phenomenon The Blair Witch Project. Since then, the movie has been plagued by polarizing reviews and the unexpectedly disappointing box office performance of the film, helmed by indie darling Adam Wingard and written by Simon Barrett — a dynamic duo that, up until this point, seemed almost unstoppable.

After enormous indie success, Wingard and Barrett were poised for mainstream fame with the heavily hyped and brilliantly marketed Blair Witch. But genre fans, once foaming at the mouth for this wide theatrical release, have failed to support the film at the box office following less than favorable critical feedback. Even Barrett himself took to Twitter to post his disappointment at the tepid reception.

To which, the always entertaining Wingard responded with some good natured teasing aimed at the weekend’s box office blockbuster, Sully.

Both gentlemen exchanged some witty banter and light-hearted, self deprecating humor as they made the most of a bad situation. Of course, in spite of the jokes, they also both took the opportunity to thank the fans who supported the film and remind everyone how much they still believed in the movie they made together.

Our own America Vidiot (aka Benjamin) helps us launch our new YouTube channel by offering his take on the film…what went right, what went wrong, whether or not you should listen to the nay-sayers or take a trip back to the Black Hills Forest for a re-encounter with the legendary Blair Witch of Burkittsville. He reviews the new film in the context of the franchise’s legacy and modern day audience expectations for found footage films.