Give yourself over to the arcane charms of “The Love Witch,” Anna Biller’s Technicolor love story turned feminist parable. 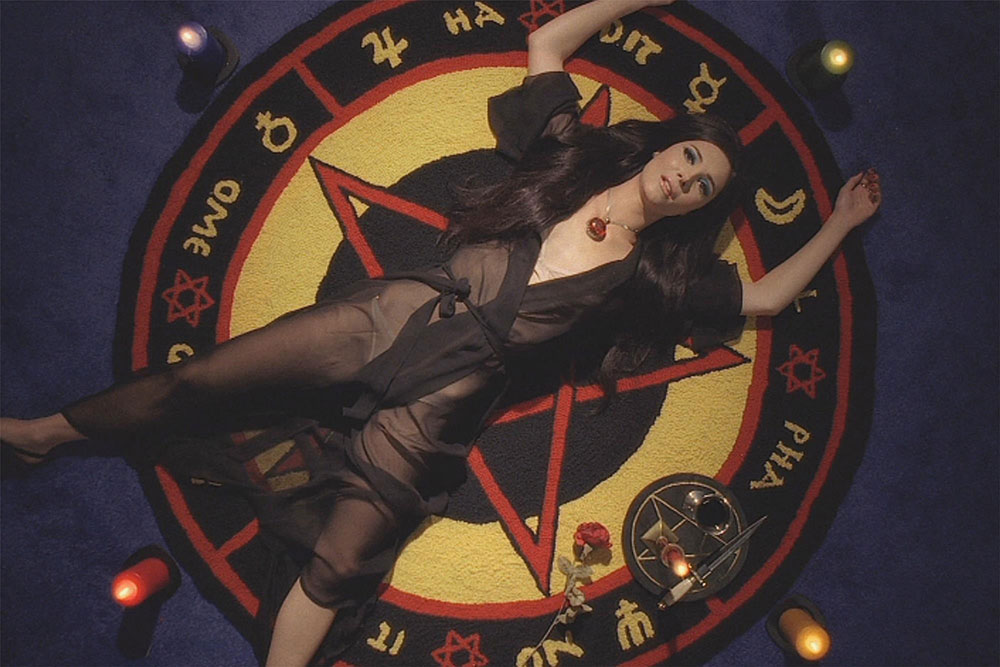 Shudder Sunday gives me an edge. If I was plain reviewing these movies, time would be of the essence. I’d have to watch and write with a minimum of digestion in-between. It’s not hopeless; Smarter people than me do it all the time, and on this site, too. But sometimes you walk away from a movie feeling like it made your year only to forget how it ended a week later.

The contrary is at least more constructive. It’s a wise kind of love when that dud you saw so long ago suddenly speaks to you or, more accurately, you’ve grown into the perfect person to hear what it’s saying.

As we pass the three-and-a-half-hour eye of the Oscar storm and charge headlong into the gale force ‘What Should’ve Won’ winds on the other side, it’s worth considering how often winning and losing filmmakers left in its wake suggest a decade delay before weighing the importance of any given movie. 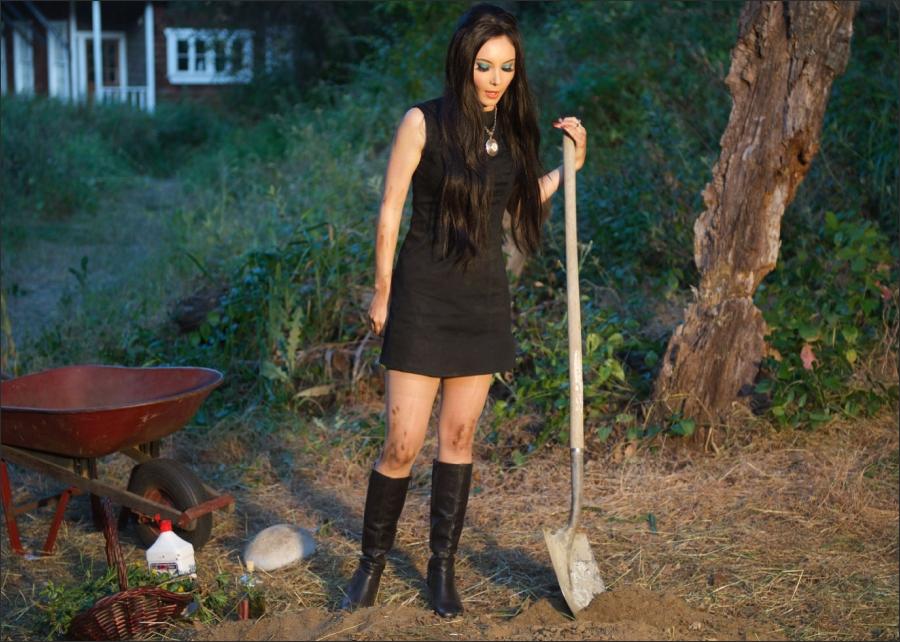 The Love Witch is not that old — it came out in 2016 — but I don’t know what I would’ve done without some welcome time to digest, thanks in no small part to the fact that it certainly looks like it was made in 1969.

Next time you’re at a party with a host cool enough to have Shudder, covertly put on The Love Witch and convince as many people as possible that you turned on Turner Classic Movies. Like all the best party games, the payoff is paltry and the price is mass discomfort, but I bet there’s worthwhile conversation to be had with anyone transfixed to the screen. 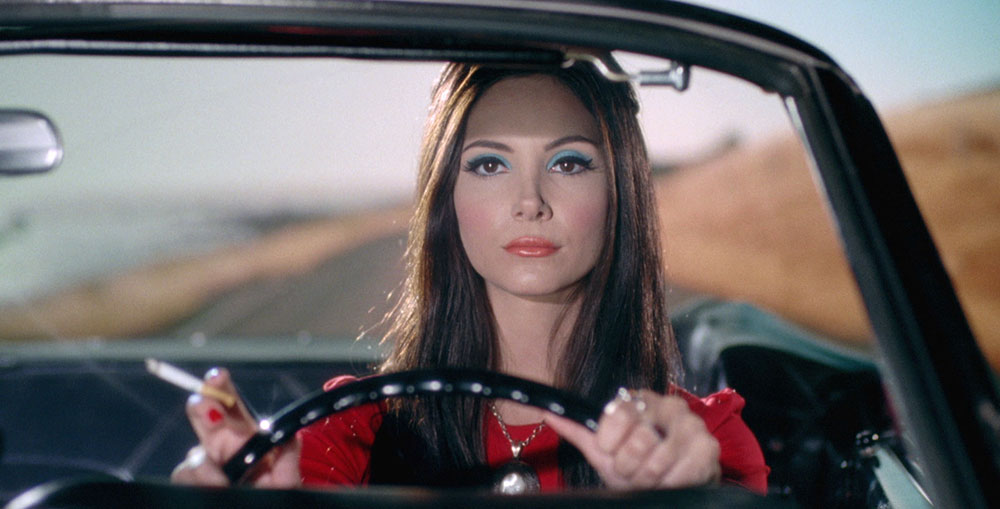 Even that reduces The Love Witch to its Technicolor-timeless aesthetics.

If I may be so shameless, that’s just part of its spell.

In our enduring ‘80s renaissance, every other indie movie is supposed to look like another movie. The crucial difference, besides the very different era of necromancy, is the detail. Vintage cinematography specialist M.David Mullen certainly pulls out all the stops to trick the eye, but Anna Biller makes it all live.

I didn’t give her a title because any hyphenated combination still feels like faint praise. She wrote it. She directed it. She produced it. She scored it. She cut it. She was the production designer and art director. She designed and decorated the sets. She made the props and costumes by hand.

Once upon a time, if a filmmaker did more than two jobs on set, they’d get a college course dedicated to them and a rubber stamp with that dustiest of film superlatives, auteur. 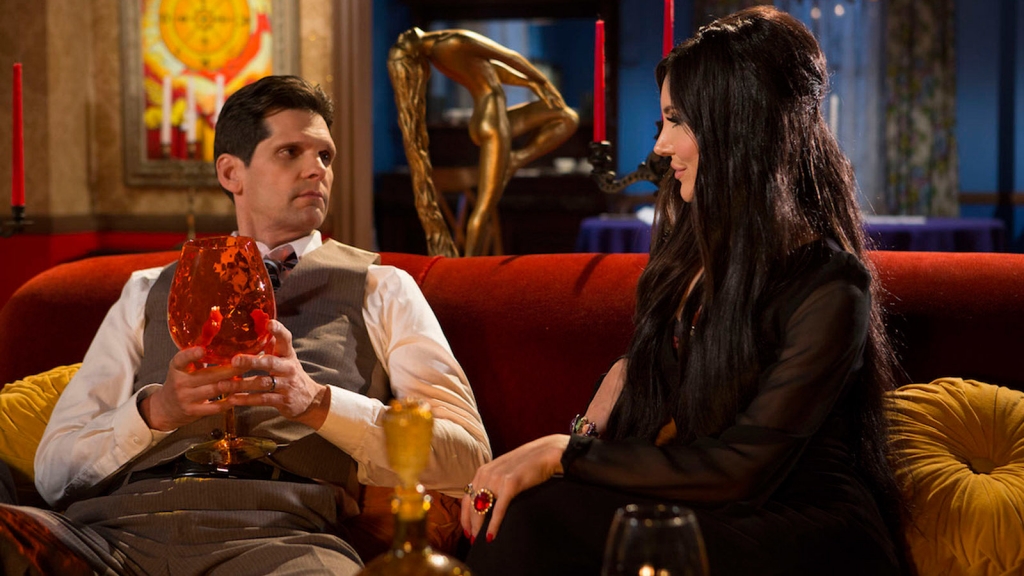 What Biller did on Love Witch puts most contenders to shame and, in the process, turns her work into a one-of-a-kind antique.

Actors and actresses alike all step into frame knowing how exactly how gauzy the lens is for their closeup. To anyone unfamiliar with the golden age of presentational acting, the park-and-bark style will seem the stuff of parody. However, Biller holds the line — it’s stilted by design, but not silly. It’s second nature by the end of the first few rear-projected driving scenes. It’s a flawless effect that, if anything, only makes the subject matter more unassumingly rich.

The Love Witch takes place in a world where all the cops have jawlines on loan from Monument Valley and stop just short of demanding, “Just the facts.”

Women meet for lunch in sprawling tea rooms decorated exclusively in various shades of cotton candy. Yes, there’s witchcraft, but early on it seems no more harmful than the kind of magic Adam West would fight in tights. 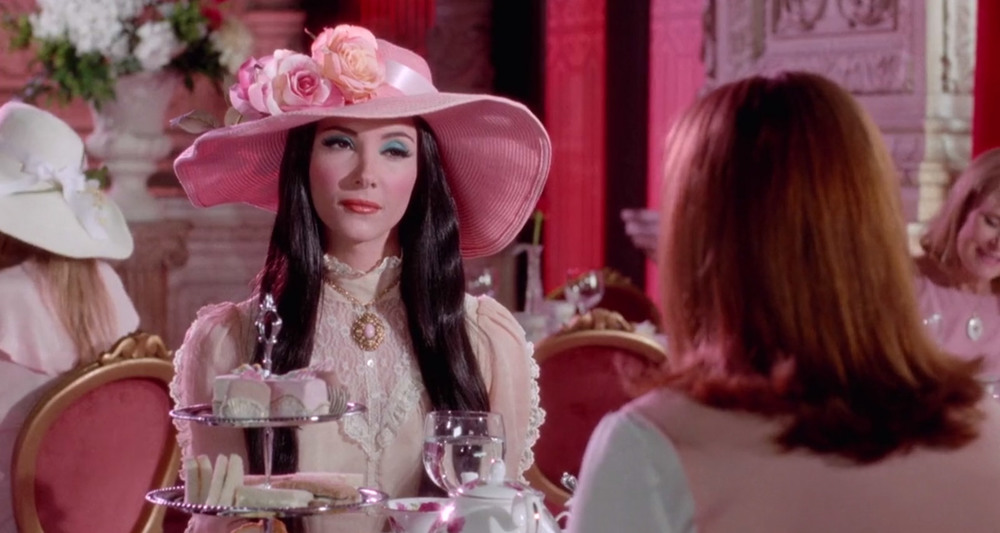 It could be a deeper issue of how we often force a lens of unnecessary naivete on old art, film especially, but The Love Witch uses any such condescensions against you.

Elaine is just looking for love. No harm in that. Given the fact that she’s played by Samantha Robinson and made up to look like a Robert McGinnis movie poster come to life, it shouldn’t be too hard to find. But that’s just part of her strategy. She intentionally embodies the deepest desires of men, seduces them with her specialty sex magic, and waits for the inevitable connection to follow.

If you suspect any holes in such a plan, you may already be a little more lucid than Elaine.

It’s not like the men don’t fall for her — just about anyone Elaine wants, she gets — the real glitch is how they keep dying within a day or two of the consummation. Not fall-down-dead dying. Sweaty, feverish, Oregon Trail kind of dying. Oh well. Just another sad song for Elaine. 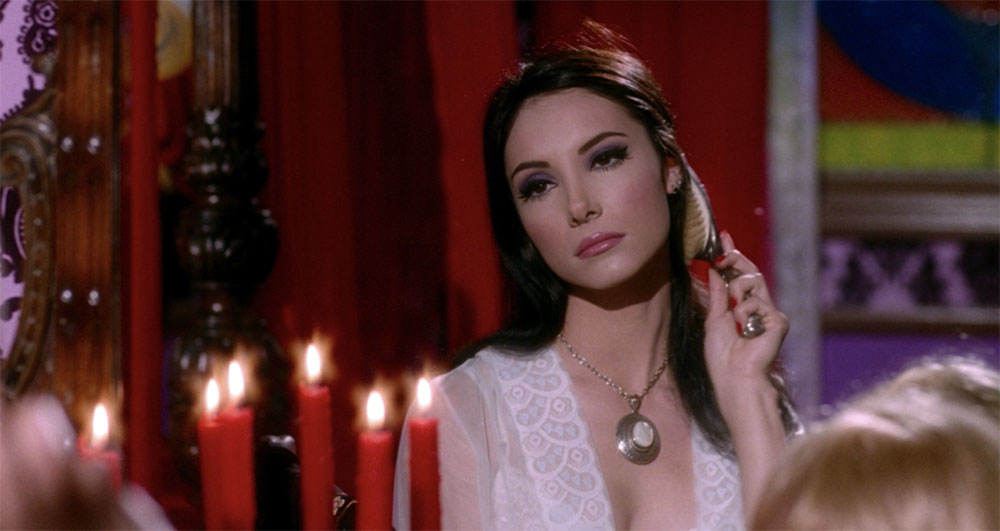 Sketched broadly, The Love Witch is the exact kind of movie that seems tailor-made to rile up a certain demographic of internet villainy.

It’s a feminist exploration of women’s sexuality, in response to and service of men’s own bent identities, that almost plays like a revenge picture.

Just about each lover Elaine lands soon presents a dazzling array of red flags. One laments, after they’ve had sex, how he can’t find a woman who’s smart and hot. Another, as he’s nuzzling her cheek, vows in voice-over that the more you know a woman, the less you can love her. It all ends up confirming Elaine’s own guiding principle:

“According to the experts, men are very fragile. They can get crushed down if you assert yourself in any way.”

Biller has mentioned before that a common complaint from male viewers is the nudity. There’s plenty of it, though you see a lot more men than the puritanical status quo would have you expect. But the outcry centers on Elaine. As a witch, a natural and holistically connected soul, she spends a decent amount of time naked, but her hair hangs long enough to cover her breasts. This, it turns out, makes a lot of dudes angry. 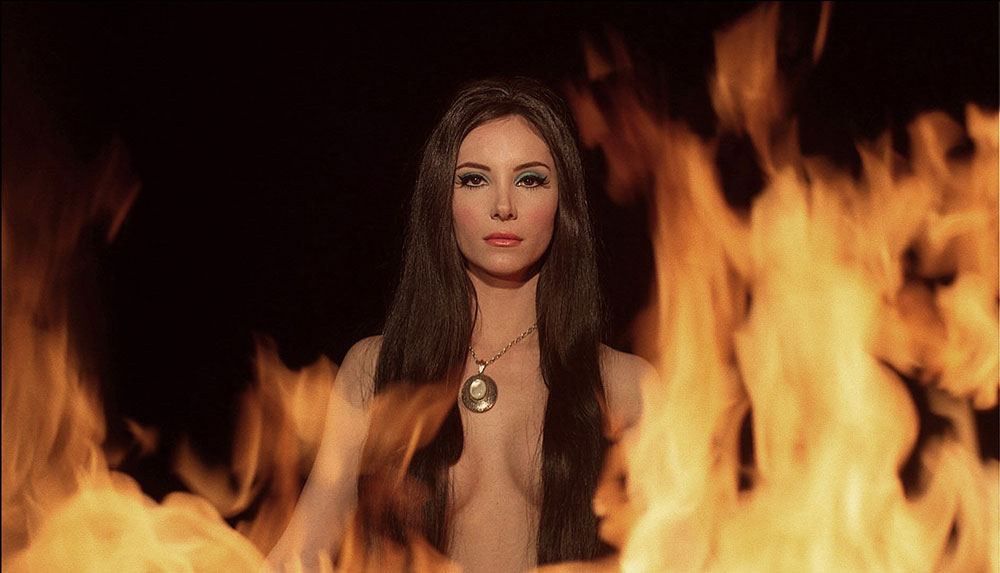 This entitlement at not being given free range of her body is more than just textbook misogyny, it’s also a dire misunderstanding of the movie.

Go look at the IMDb reviews for a while and you’ll spot the pattern pretty quick. Certain men think the grand hypothesis of The Love Witch is “Men Suck.” If you’re spoiling for a fight or just mad that this is a story from a distinctly feminine perspective, you could walk away with that. But you’d also have to fast-forward to only the raunchier bits to miss the mark by so many miles.

In at least one instance, she resents the man she seduces, even though she overlooks his 70s-stock misogyny. Trish, her only non-witch friend, questions Elaine’s man-first idea of love. Her reward? Elaine seduces her husband and discards him as fast as the rest. It’s softly suggested that her very induction into the dark arts was less than consensual, by a man who still can’t keep his hands to himself. 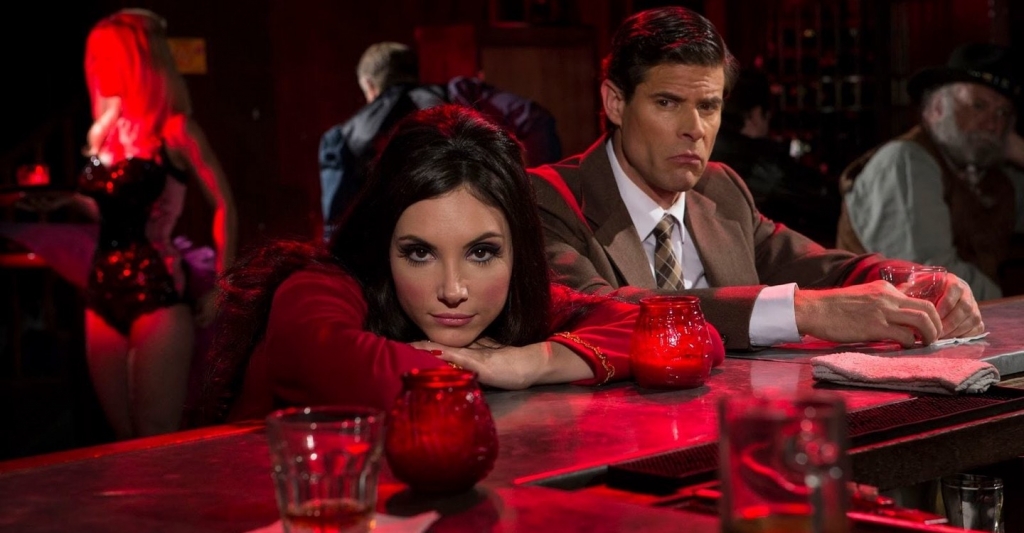 Watching through the Technicolor shine, The Love Witch is a slyly textured exploration of not just feminism and sex positivity, but the willful ignorance of narcissism and seemingly arcane gender roles.

The Strickfaden-chic logo of Oscilloscope Laboratories should’ve immediately clued me in that this was work of uncommon valor (see: The Road Movie, my first ever Shudder Sunday).

But even that didn’t prepare me for The Love Witch‘s slow seduction, using my own preconceptions and its one-of-a-kind aesthetic charms against me, not realizing just how far I’d fallen under its complex spell until both hours were up and the ending stood me out of my seat.

For Women In Horror Month, or any month, give The Love Witch a try. For extra credit, listen to Anna Biller’s episode of the Shudder podcast She Kills. For your consideration, mull over the movie’s most dangerously double-edged thought:

“Feminine ideal only exists in a man’s mind.”