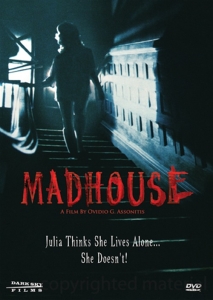 Synopsis: Julia is a teacher at a school for deaf kids. Her past returns with full force after she is persuaded by her uncle/priest to visit her terminally ill twin sister, Mary, in a mental hospital. The meeting brings back nothing but terrible memories and a threat from the committed twin that she will make her suffer.

From the man who co-directed Piranha II: The Spawning with James Cameron comes Madhouse/There Was a Little Girl/And When She Was Bad.

Killer Line: She was the mistress, and I was her slave.

In Ovidio G. Assonitis’ back catalogue, he has this little beauty which has gained notoriety purely because of it being on the video nasty list. At the start, we are introduced to the crazy twin in the hospital. But it seemed very rushed to me, and I expected a little more time to be spent on the nutbag about to destroy Julia’s life. It left me confused about what was going on. Julia’s character development is nice, and as we get to know her as the teacher at a deaf school. It provides a sense of who she is as a person in comparison to her sibling…and there is a stark contrast.

Mary escapes from the hospital, which strangely enough is only mentioned once in the entire film. She hides out in a block of flats with her dog, which mauls and kills a few people including a deaf child. This was pretty shocking I thought. I didn’t expect the director would go so far as to kill off a kid, but at least it wasn’t shown onscreen. The dog has a pretty fucked up face, and it looks like it’s had a fake mouth put on it – BIZARRE! When the dog receives a drill to the brain, it is a terribly executed effect, and I think it was just some kind of puppet sticking its head through a door.

The film is counting down to Julia’s birthday, which is when the twist is revealed, and it’s almost enough of a shock to redeem this slasher. But it still ultimately falls rather flat on its face. The tense moments are very few and far between, and the out-of-pace music does nothing to help matters, but rather destroys any possible tension that could have been built up. The production value is high. The building that the majority of the film takes place in is a nice setting that helps to set the atmosphere with its old style and plenty of stairs for the characters to trip on. It’s mediocre at best, bland and uninteresting, and not worth the effort you’d have to go through to watch it online or on DVD.