Microbudget Monday: Beyond the Gates of Hell (2022)

It’s time for some low-budget zombie and monster mayhem from SCS Entertainment with the ridiculously fun “Beyond the Gates of Hell!” 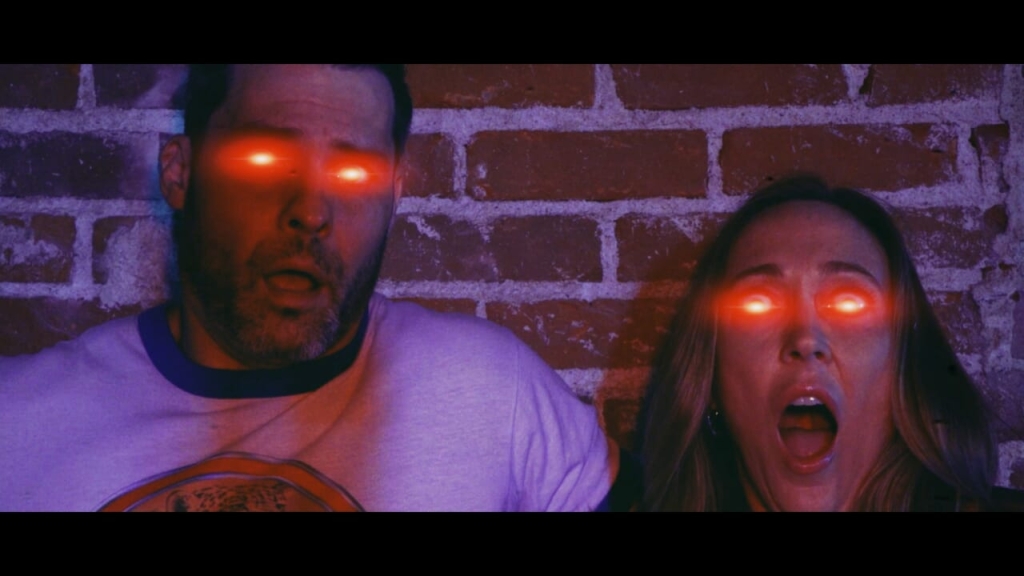 The film begins with some faux trailers. First up, in the sleepy town of Romeroville, a zombie plague is unleashed via poorly managed government chemicals, and only the village idiot, Bruce Rhodes (undoubtedly a nod to both Bruce Campbell and Captain Rhodes from Day of the Dead), and a doctor with the cure can save mankind. “Two men must fight…200 zombies will bite.” Zombie Blast Fighter!

This is immediately followed by a trailer for Don’t Eat My Flesh featuring a couple of bumbling exorcists, hideous threats from beyond (“You’ve tested positive for demon possession!”), and a gorgeous hottie covered in blood with a set of pipes perfect for screaming (and who knows what else).

AND NOW, OUR FEATURE PRESENTATION

Starting off with a pair of boobs, a knife to the throat, and a soundtrack inspired by your favorite Dead films, we then get a cool retro title screen with a Goblinesque score (by Joshua Palace) as the opening credits pop up in a gothic font worthy of any ‘70s Grindhouse schlocksterpiece.

We follow a thirty-something couple to a palatial estate where they meet Sheryl (Brinke Stevens, The Slumber Party Massacre), a real estate agent who offers to give them the grand tour before handing over the keys.

The location scouts certainly outdid themselves.

Even a non-horror fan would enjoy the footage of the interior and exterior of this (for lack of a better term) mansion with its eclectic décor, statues, fountains, and antique furniture.

In true horror story fashion, Sheryl tells the couple that back in ’81, a former homeowner with ties to the film industry was suspected by the townspeople of being a devil worshipper, so they followed him back to the estate and burned him alive in the basement.

Then, a year ago to the day, a young girl was found stabbed to death in the said basement (presumably Ms. Boobs from the opening sequence) — probably by her boyfriend, who was never found.

The agent tells the couple the townsfolk believe the house is built over the gates of hell. NOW how much would you pay?

Shaken but not deterred, the couple decides to keep the house despite Sheryl offering them 100k above the offering price to sell. This creates some understandable tension between the couple, Ian (Eric Larsen), who is a director of photography and sometimes writer, and his wife, Katrina (Traci Burr).

Things immediately get weird as soon as the wife heads off to town for groceries.

“Jennifer the Housekeeper” (Allie Perez) introduces herself in about as creepy a manner as possible to Ian as he is about to shower. Standing there while he’s in the buff, she informs him that she “comes with the house” and that she cooks, cleans, and whatever gives him pleasure. Nothing weird about that at all.

We are then introduced to Heather (Janet Lopez), the lovely daughter of Ian and Katrina, who arrives at the house, entering to look for her mother, who she is calling for when…rut roh. Suddenly, she is pulled into a dark place after being stalked by Jennifer.

Katrina suggests they get a priest to bless the house. The one they find (Brad Banacka) REALLY loves his job, making his way through the neighborhood on a lovely, blessed day.

Next, a mysterious woman in black with sunglasses and a cane is seen sauntering down a dirt road in what can only be Southern California. The woman (Jennifer Moriarty) arrives at the house and introduces herself to Katrina as Henrietta. She explains the house does, in fact, rest over the gates of hell and that the previous owner was a warlock.

Katrina then decides to do a little online investigation of her own. She discovers the house is steeped in far more of a dark past than even those who have been trying to warn her about it let on (including the disappearance of the murdered owner’s wife).

Father Tom arrives to bless the house, but he is no match for the forces of evil at work in that house. His blessing goes awry, ending up with an apparent win for the devil. 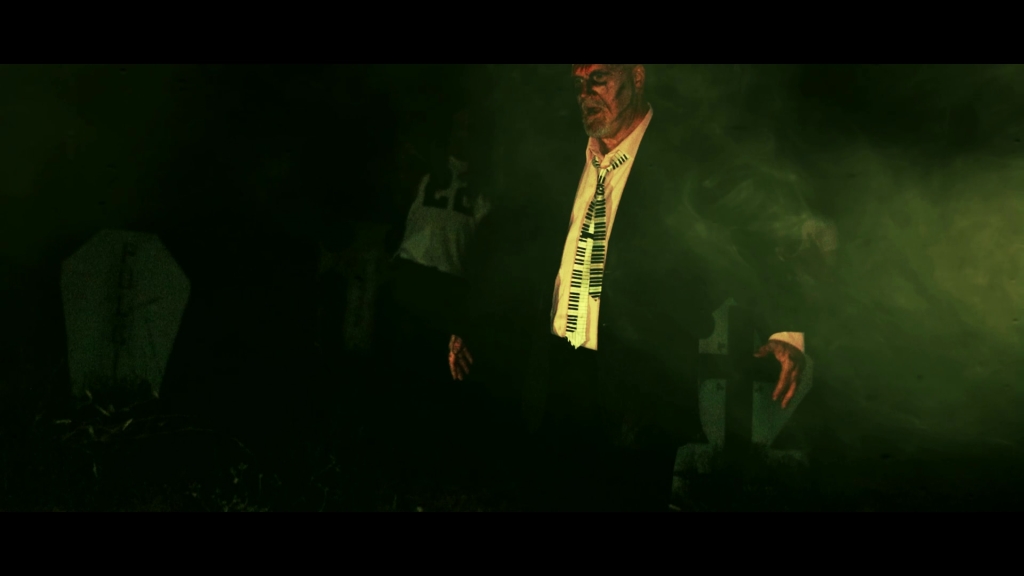 Then, without warning, the graveyard nearby is now teeming with zombies.

This new living dead aspect of the plot seems to come from nowhere, but I’m always up for a little zombie action, so what the hell? My favorite of the zombies has to be the one with the dreadlocks; he’s what we in horror fandom call a “twitcher”.

The zombies soon surround the house, with Katrina and Ian trapped inside. They decide to seek shelter in the basement. Aw jeez. Watch out for that hideous monster down there (which scared the shit out of me when it emerged from the shadows to “keep an eye out” for the plumber).

I won’t spoil the ending for you. But suffice it to say, the next time you move into a spooky house, maybe listen when multiple people tell you to get the hell out of there.

4 out of 5 stars for me – I think every horror movie should have a downbeat ending.

BEYOND THE GATES OF HELL does an awful lot with very little budget. If this is a stepping-stone for up-and-coming genre director Dustin William Ferguson, I can’t wait to see what he’s capable of with some studio backing and a few million dollars. Keep up the great work.