Posted by:
Tags:  Get Out Jordan Peele social horror SXSW thriller Us

Our staff heads to the theater to check out “Us”, Jordan Peele’s highly anticipated sophomore film, to discuss and debate if it lives up to the hype. 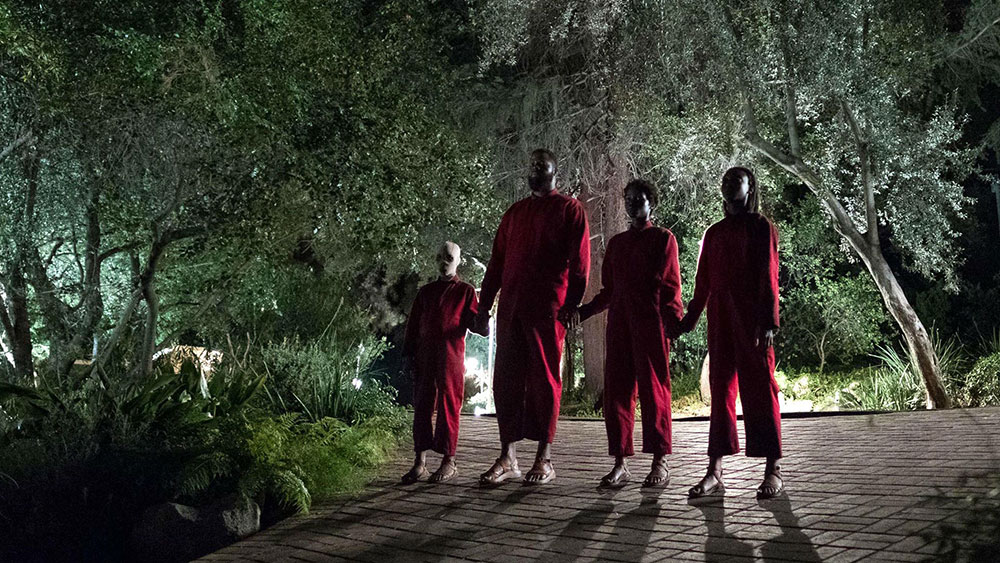 Depending on who you ask, Jordan Peele’s directorial debut Get Out (a film he also wrote) is either a masterpiece of socially conscious horror heralding the arrival of the next great auteur of genre filmmaking, or it’s a vastly overblown “not really horror” thriller that owes its tremendous success primarily to the current cultural/political climate (rather than the actual merits of the film).

After cleaning up at the box office, winning an Academy Award for screenwriting, and prompting heated debate over whether he might be a contender for the title of the next Master of Horror, Peele’s follow-up film Us could not have arrived with more anticipation — or with any higher stakes for the filmmaker. Was Get Out a fluke? Is Peele capable of delivering as much terror as social commentary? Can he deliver something different that reflects his range and versatility, while still maintaining the magic of his celebrated debut? Us seeks to answer those questions and provide a clearer picture for Peele’s future success in the genre. 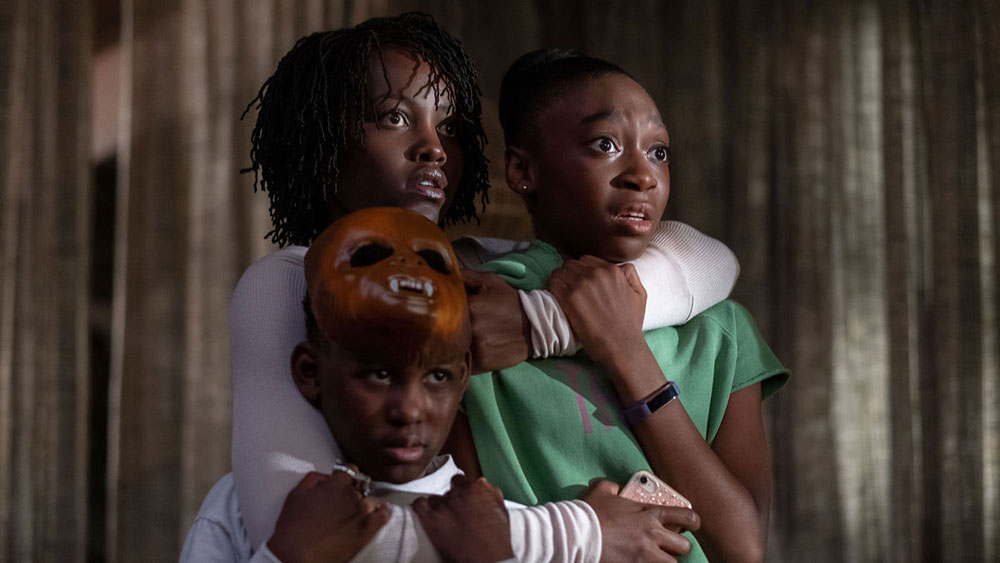 His new film, starring Lupita Nyong’o (12 Years a Slave) and Winston Duke (Black Panther), made its World Premiere at SXSW just a couple of weeks ago. It received immediate critical praise, quickly earning a 94% Rotten Tomatoes score and outstanding reviews. But it’s not just those ‘snooty’ critics who have embraced the film. It’s also winning the hearts of audiences, while shattering box office records left and right. From the film’s opening on March 22, 2019, throughout its opening weekend, it has amassed over $70 million nationwide — breaking box office records for horror films and live-action films in general, nearly matching Avatar‘s $77  million opening weekend in 2009.

Of course, with a film this hyped and this buzzed about, expect more debate about whether this film, like GET OUT, is really worth all the accolades. Is it a masterclass in horror or a pretentious arthouse thriller? Will US bring new fans over to team Peele or reinforce the belief that his genius is overrated? Our team weighs in below, with six different takes on the film. However, like GET OUT, it’s probably best not to know too much about the film before going in. So you may want to see US for yourself first before reading our thoughts.

TAKE ONE: THIS IS US…AND IT’S BOTH TERRIFYING AND BRILLIANT

Given the insta-classic status of Get Out, my hopes for Us were high. I was not disappointed. Us is a meditation on class, the individual, and the fate of society all wrapped up in a freaky tale that has its roots in some of the oldest myths there are.

When the Wilson family takes a vacation to Santa Cruz, mother Adelaide is reluctant to go to the beach, the site of a traumatic event that happened when she was a child. After a brief scare and a series of coincidences, her uneasiness grows until a mysterious family appears in the driveway. These strangers are rough-hewn clones of the Wilsons, versions of themselves who have lived as shadows in subterranean tunnels. But the tables have turned, and the Tethered (for that’s what they’re called) have come to reap their revenge.

What could have easily been a simple home invasion movie expands scope and meaning. Noting the duality of his subject, every aspect of this movie has two or more meanings, like mirrors reflecting on themselves. Even the title is also a reference to the United States. 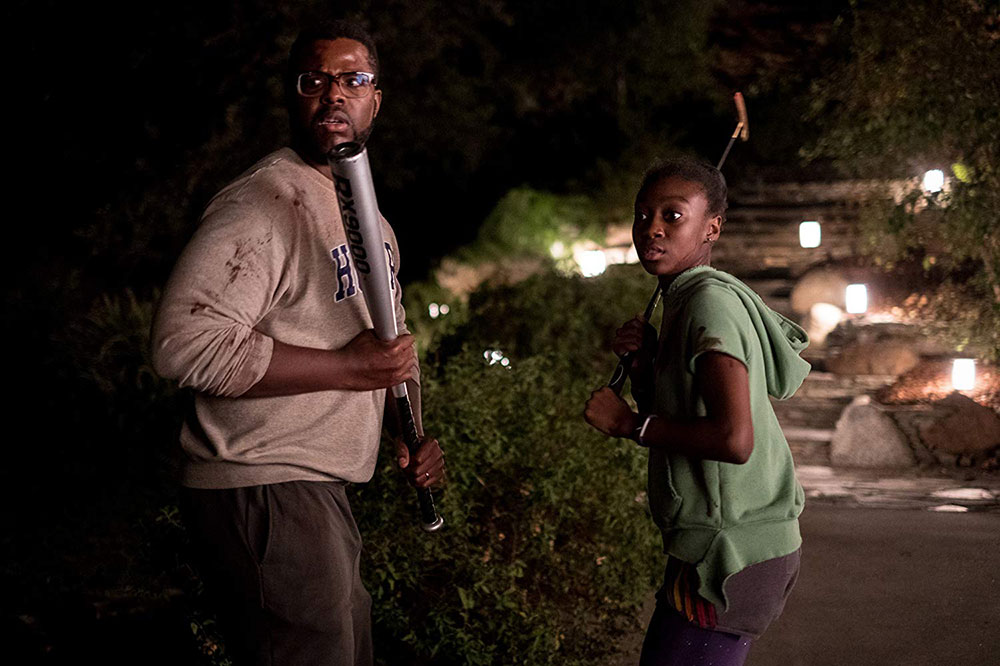 Between the bold imagery and the nods to horror classics, every scene has something hidden for those willing to look. But sometimes those flourishes can distract from a well-told tale. In that sense, GET OUT, being more restrained, is still the better of the two films. With Us, it sometimes felt like Jordan Peele was throwing every creative impulse at the script, and it would have been more effective with some judicious editing.

That said, Us is still not only good, but exciting. Not only smart, but inspiring. Unlike so many other horror films, Us takes the traditional fear of the other and turns it on its head. The Tethered are a disenfranchised, vulnerable population controlled by those in power. Peele asks us to identify with these monsters in a brilliant way. It is no wonder that when asked “What are you?” The Tethered reply, “We’re Americans.”

TAKE TWO: WHAT’S TO LOVE? WHAT’S NOT TO LOVE? 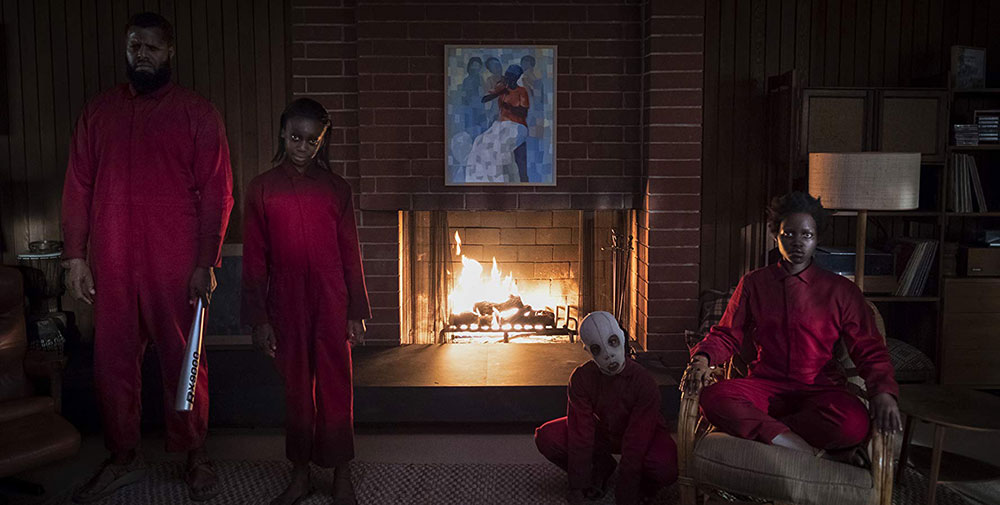 Us is an amazing follow-up to Get Out, especially after we’ve learned what a big fan Jordan Peele is of the horror genre. We get to see that even more with his second film, not just because it fits more easily into the category of horror than his debut, but also because of the references to classic horror films that he sprinkles throughout.

There’s a lot about Us that is fun and funny — primarily the relationships and interactions within the family of protagonists. Just because this is scarier than Peele’s previous film doesn’t mean he’s lost his sense of humor. And all of the actors involved are delivering A+ performances across the spectrum: horrified, happy, worried, devoted and shocked. Plus they’re each playing two completely different characters! The whole movie could be a master class.

The best thing I could say about the film is that I don’t know what the best part of it is.

I’ve already mentioned the acting, but the script is so tight, as are the cinematography and direction — and the soundtrack is something special too. Each piece comes together to make this movie what it is. And I would be remiss not to mention the opening credits of Us, which are unsettling and mesmerizing, complete with haunting music. It’s no surprise that Peele’s debut was not a fluke, but this release just leaves me wanting to see everything he does that much more. This movie is definitely worth multiple rewatches.