Movie of the Week: Premutos Lord of the Living Dead

Sorry for the hiatus last week, but we were gearing up for Texas Frightmare Weekend. Never fear… we’re back with another weird recommendation from the obscure movie vault. Hope you enjoy! 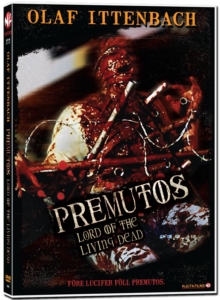 I’m a huge fan of splatter films. I love the classics like Bad Taste (1987), Blood Feast (1963), Splatter Farm (1987)… and the list goes on and on. While I do like some style and comedy in my splatter flicks — like the great Peter Jackson film Dead Alive (aka Braindead) — the best ones to watch for me are the ugly, trashy, and cheesy ones like Redneck Zombies. Needless to say, I knew exactly what I was getting into when I popped in the cult German splatter film Premutos: Lord of the Living Dead (aka The Fallen Angel).

Premutos is a 1997 movie from German director Olaf Ittenbach (The Burning Moon, Black Past, and House Blood), one of his earliest films and often considered one of his best. The films stars Andre Stryi, Christopher Stacey, and Ittenbach himself. Even though I still don’t understand the plot to the movie myself, I’m going to try my hardest to explain it. 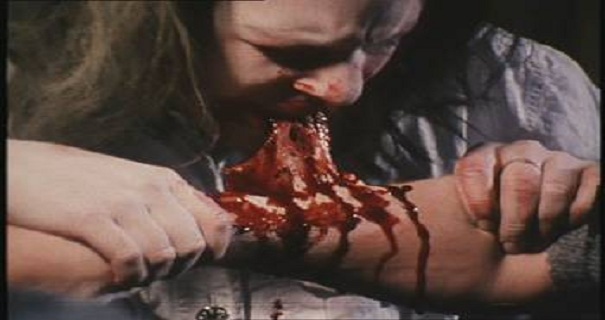 The movie is about Premutos, the first of the fallen Angels (even before Lucifer). He has been summoned throughout history to wreak havoc on mankind. His goal is to return to Earth and rule over all its creatures living and dead. In order to do so, his son must clear the way for him. The story of Premutos is told through narration and through a series of flashbacks to dark events throughout history, where we see the son appear in various forms.

The main plot of the movie centers around an awkward young man named Matthias (played by Ittenbach) who lives at home with his mom and stepdad. He continues to see horrifying visions of past death and destruction that transport him back to medieval Europe and war-torn Germany, even all the way back to the crucifixion of Christ. One day, Matthias’ stepfather finds an ancient evil book and a strange potion buried in the backyard. One thing leads to another and Matthias accidentally unleashes an army of the dead, causing all hell to break loose. 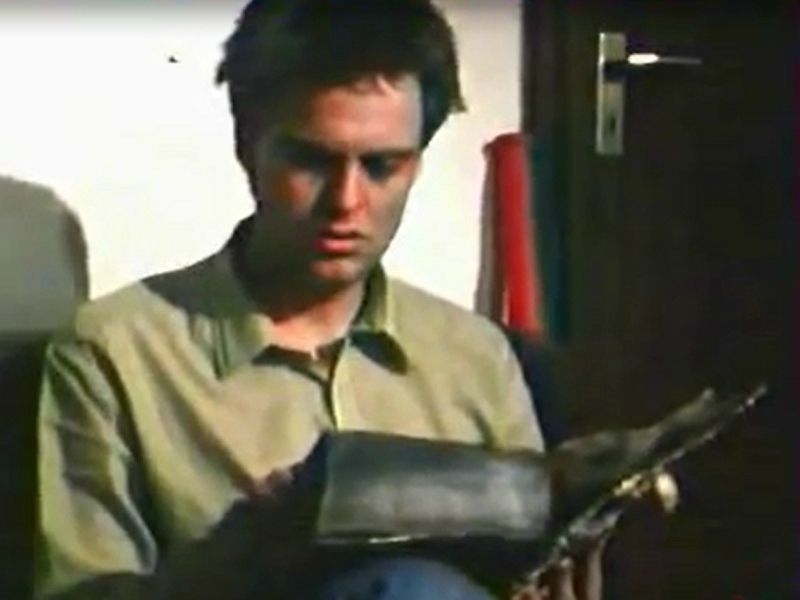 To be honest, I have absolutely no clue where to start with this movie. It’s just insane! I really can’t say this is a good movie by conventional standards. It’s actually pretty bad. Let’s just start with the basics. Absolutely no character is remotely likable in this film besides the stepfather — the only one who really kicks some ass in this movie. And it is nice to see almost everyone get torn apart in a bloody fashion, but you really only see any of that towards the end. 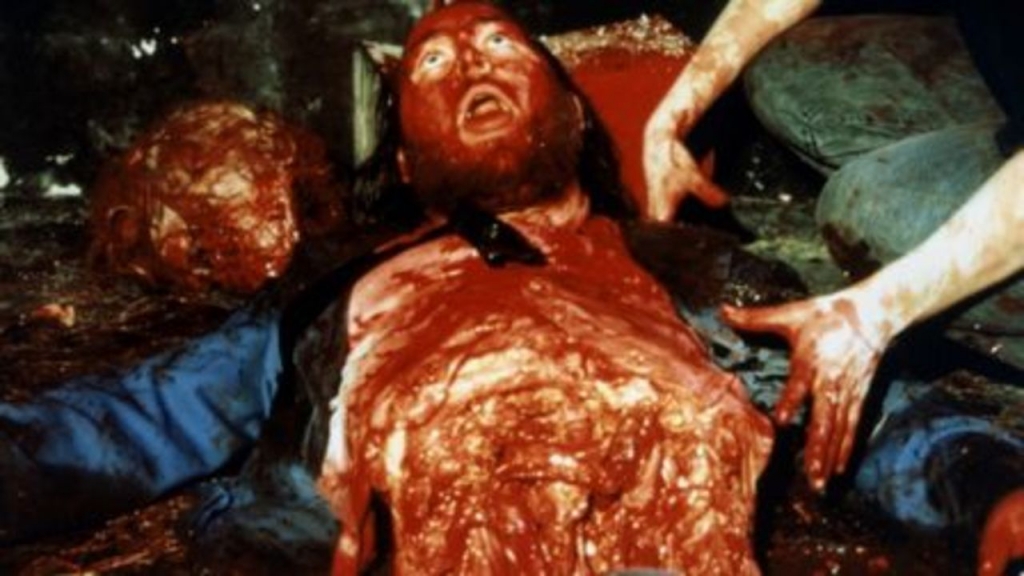 The buildup to the chaotic ending is slow and somewhat boring. At an hour and 45 minutes, the film feels way too long. A slow burn can be great when you’re dealing with an artsy film that focuses on strong character and plot development. But this is not that kind of film! This is a movie best known for its over-the-top gore, and it takes too long to get to the really good stuff.

But the good stuff is REALLY good. The movie does pack quite a punch with its fantastically bloody and infamously gory ending. And that’s what really saves the movie. The effects are amazing and are done by its director. So, in a way, it is worth it to check out the movie just for its plain obscurity and epic ending. 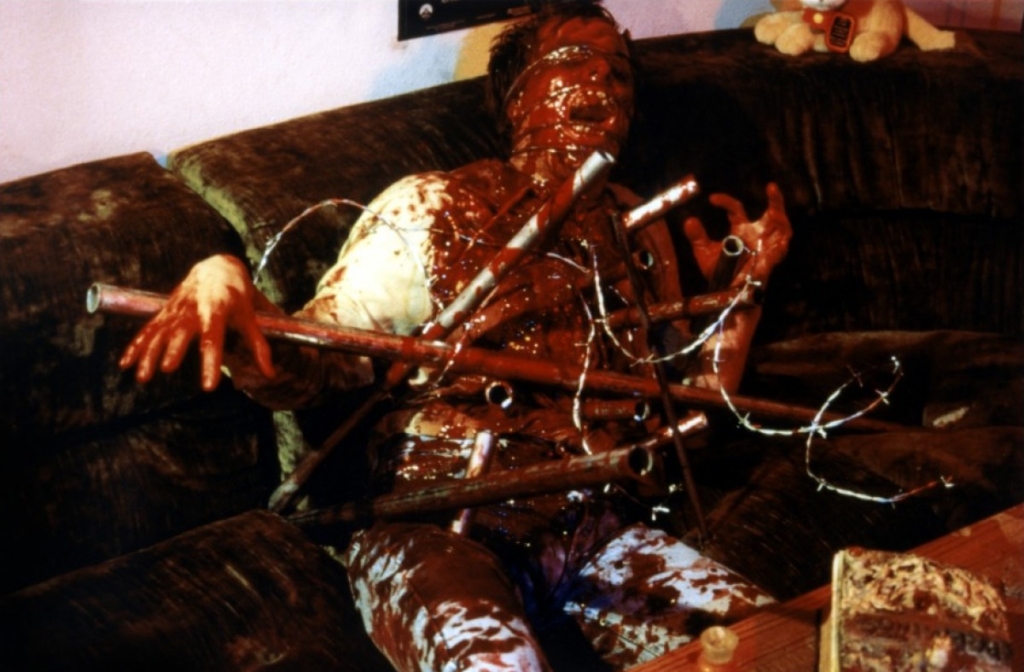 For English viewers, you’ll have to suffer through some pretty awful dubbing, although it does add to the comedic elements and the “so bad it’s good” charm of this film. If you pick this up on DVD, you’ll also be “treated” to some of the worst cover art in the history of horror courtesy of Shock-O-Rama. 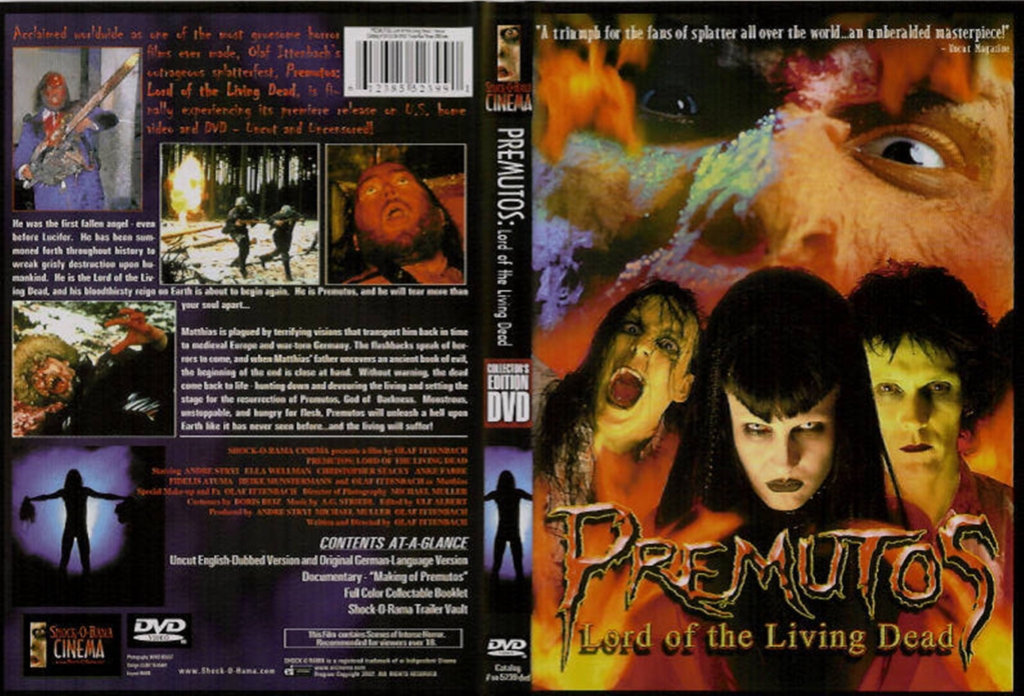 While Premutos is far from a good film — it is boring at times, hard to follow, horribly acted, ridiculously low budget, and has possibly the worst dubbing in the history of mankind — it does pack a really big punch at the end, making it one of the goriest films ever while boasting an insanely high body count of 139. In the end, the ending is probably worth the wait for gore hounds and splatter junkies. But don’t be afraid to fast forward to the good parts.