The saying goes that you can’t teach an old dog new tricks. But as I get older, I’m finding that I’m learning a lot more about the history of horror movies than I thought possible. I used to believe I had a fairly deep knowledge of horror movies, but I’ve been humbled by the fine people at Exhumed Films and boutique labels like Vinegar Syndrome. As more independently made movies from the past are found and restored, my knowledge and joy for horror continues to grow.

The McCulloughs were independent filmmakers based out of Shreveport, LA and best known for the movies CREATURE FROM BLACK LAKE and THE AURORA ENCOUNTER, among a catalog of nearly thirty movies, many of which were produced in Louisiana.

Shot and released regionally in 1983 (New World Pictures picked up the movie in a distribution deal and released it to theaters in 1986), MOUNTAIN TOP MOTEL MASSACRE is not your standard slasher film. 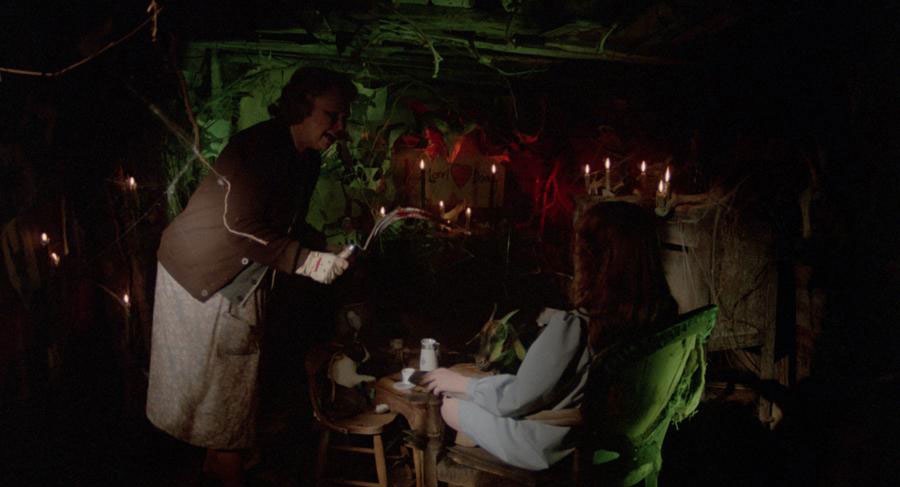 While it definitely has many of the stereotypes of a slasher film, there are some differences that help it stand out from the vast number of slashers that came out in the 80s. But does being different make it any good?

Evelyn (Anna Chappell) is an older woman, long locked away in a mental institution. She returns home upon her release to find her daughter Lorie (Jill King) practicing witchcraft in the basement and attempting to summon a demon. When Evelyn stumbles upon the ritual, she kills her daughter.

Though the local police investigate, Evelyn convinces them she had nothing to do with her daughter’s death. Though suspicious of her story, the police clear her, and Evelyn gets her Mountaintop Motel up and running.

Soon enough, wayward drivers are stumbling upon Evelyn’s out-of-the-way motel and checking in. But as Evelyn begins to hear her daughter’s voice, will her guests ever check out, or are they permanent residents of the Mountaintop Motel? 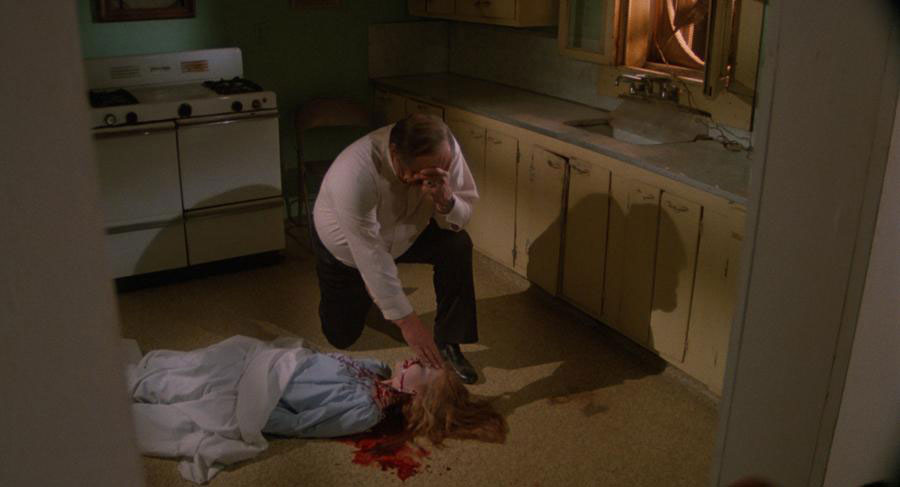 I was pleasantly surprised at how good MOUNTAINTOP MOTEL MASSACRE is.

The movie is effective as a slasher movie. And instead of recycling the story of a group of teens being the target of a killer, it’s instead filled with adult characters. There are still the requisite sex scenes and boobs that go along with 80s horror, but it is refreshing to see adults portrayed in these roles rather than the stereotypical teenager victims.

Some may grow impatient, as I did, waiting for the massacre to start.

Evelyn starts off her murder plans by releasing various pests into the rented cottages: rats, cockroaches, a snake. As Lori’s voice grows more demanding in Evelyn’s head, she ups her murder game to proper slasher levels, grabbing a sickle to start slicing and dicing her guests. There’s plenty of blood and gruesome kills to satisfy fans of the genre. 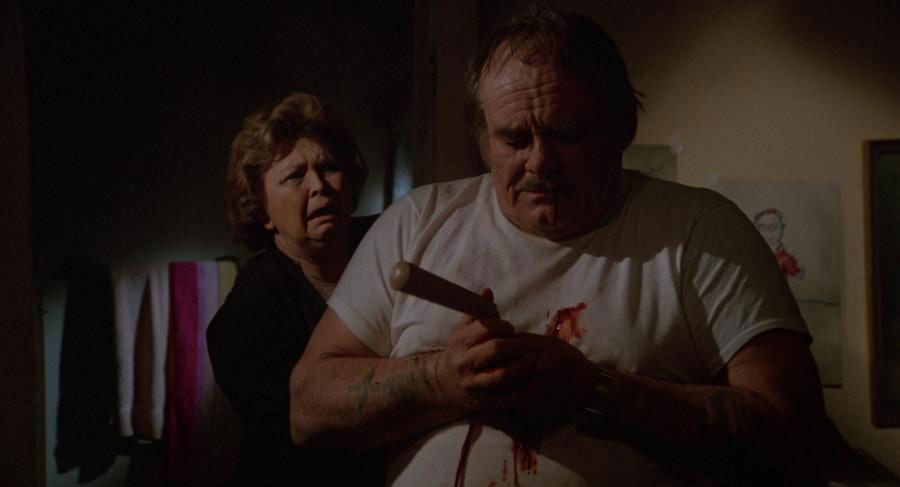 Anna Chappell is a wonder as the insane, murderous motel owner Evelyn.

She sells her personality disorders very well and plays her part well enough to hide the truth behind the voice of her daughter in her head.

As early 80s slasher films go, MOUNTAINTOP MOTEL MASSACRE is one of the top movies I’ve seen in this genre. Visibility of the movie to a wider audience was probably hurt by the lack of a movie defining villain, a la Jason Voorhees, Freddy Krueger, etc. But don’t let that stop you from seeking out this movie. 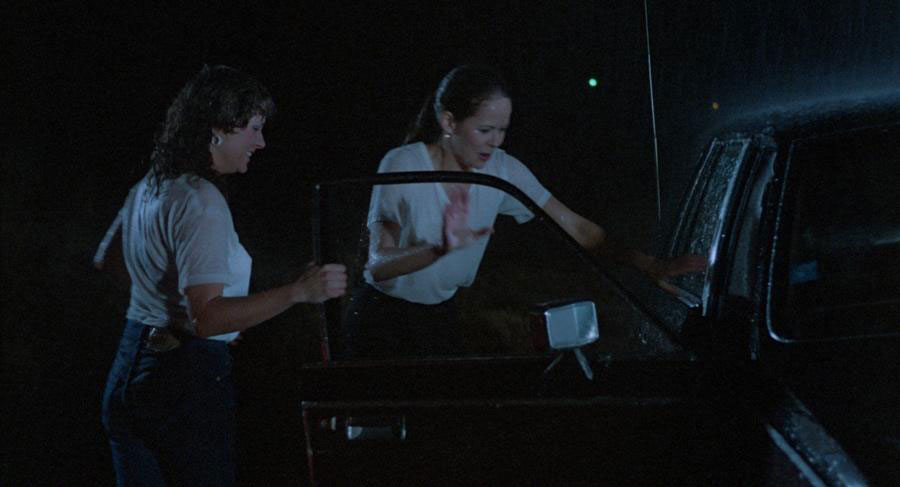 The movie was scanned and restored from its 35mm negative elements, and the picture looks good. Grain can still be seen in the picture, but I like that in older movies like this. The less than perfect picture gives the movie that drive-in theater quality look that adds to the experience of watching it.

There are two interviews on the disc — the first with assistant cameraman David Akin and the second with production designer Drew Edward Hunter. The interview with Akin covers the movie scene in Louisiana and working with the McCulloughs. It’s a fascinating peek into independent filmmaking in the South during the 1980s.

The interview with Hunter focuses more on the production of MOUNTAINTOP MOTEL MASSACRE. Hunter discusses how he got his job, working within the limited budget, working with the cast and crew, and distribution of the finished movie. 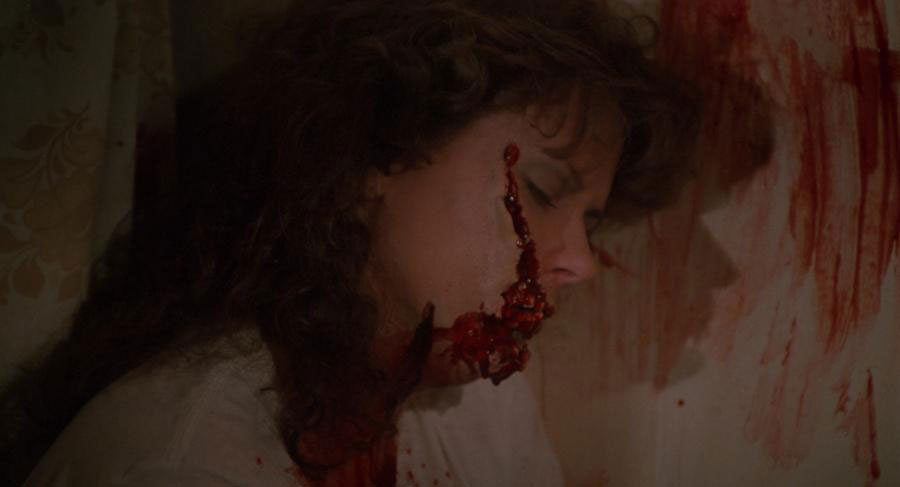 The reversible disc cover has new artwork that matches the limited-edition slipcover, and on the opposite side the MPAA rejected poster art. The MPAA deemed that the poster showing a doll with a sickle through the head was disturbing to use for advertising the movie. 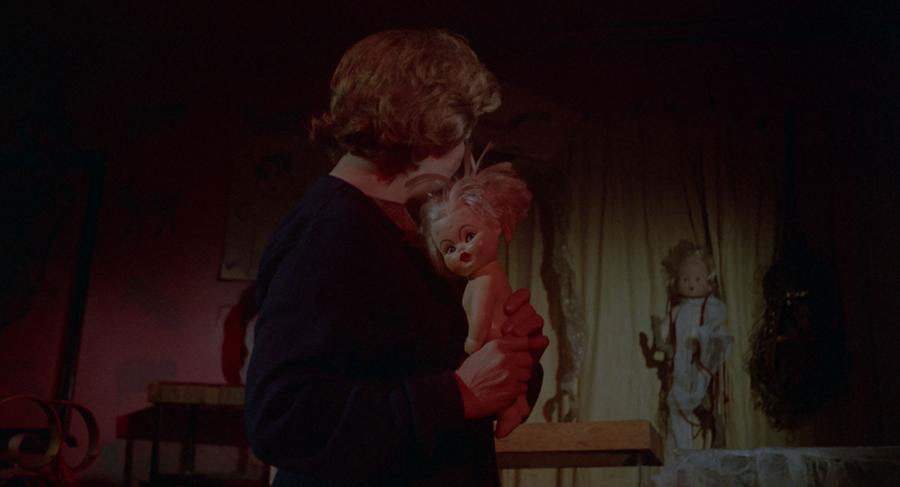 Vinegar Syndrome has delivered a great movie along with some insightful interviews on this Blu-ray/DVD combo release. The special features are lacking archival interviews with the McCulloughs, if they are available. A commentary track with David Akin and Drew Hunter would have been entertaining and insightful, much like their two interviews. Neither lacks passion or knowledge about the experience of working with the McCulloughs and making MOUNTAINTOP MOTEL MASSACRE (which is a fantastic movie title).