Murder Made Easy is a fast paced, highly entertaining, wonderfully fresh take on the murder mystery sub genre — full of twists and surprises 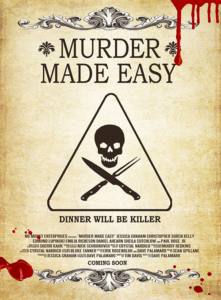 Murder Made Easy is a 2017 film written by Tim Davis and directed by David Palamaro. It is, at its core, a horror/thriller, but there are many darkly comedic moments throughout its 75-minute runtime. Due to the movie being so short for a feature, it’s fast-paced and uses its time wisely.

Hosts Michael (Christopher Soren Kelly) and Joan (Jessica Graham) have several dinner guests over one night, and there are a number of deaths that pile up rapidly. Aesthetically speaking, Joan looks every bit the femme fatale: a tall, slender woman with pale skin, dark hair and a red dress.

The guests represent a swath of personality types: Marcus (Edmund Lupinski) is an older academic type with a background in theater, Cricket (Emilia Richeson) is an extreme hippie who’s into spiritualism, Damien (Daniel Ahearn) is a wannabe indie filmmaker and Angela (Sheila Cutchlow) is an author and psychoanalyst. The cast makes for a motley crew.

Each scene is set with a title card representing the course of the meal being had, which is a nice touch to the ambience of the movie. Roughly 38 minutes in there’s an “Intermission” title card; following that are some of the most interesting and creative shots in the whole film.

Throughout the film, the audience is nearly as in-the-dark as the characters. The tone goes back and forth between jocular and tense. There are a number of twists and turns that may make you question loyalties and motivations of different characters, and you may wonder where the plot is going at a certain point.

Murder Made Easy uses a number of horror and thriller tropes and references, including a reference to an Agatha Christie story, while still managing to feel like a fresh take on the murder mystery genre.

Murder Made Easy had its World Premiere at the 2017 Women in Horror Film Festival where it won the Indie Spirit Award, and it’s currently in the middle of its festival run. When you get a chance to catch this one, be sure to check it out. We think you’ll really love it.