New on Blu: The Living Dead At Manchester Morgue (1974)

Synapse Films’ “The Living Dead At Manchester Morgue” is a must-have Blu-ray for every horror fan and the gold standard of zombie films.

I’ve watched The Living Dead At Manchester Morgue more than a handful of times, including three times for this review, and with each viewing, I catch something new and find myself appreciating what Jorge Grau did more and more. The Living Dead At Manchester Morgue has quickly become one of my favorite horror movies, and I believe it to be one of the best zombie movies ever made. 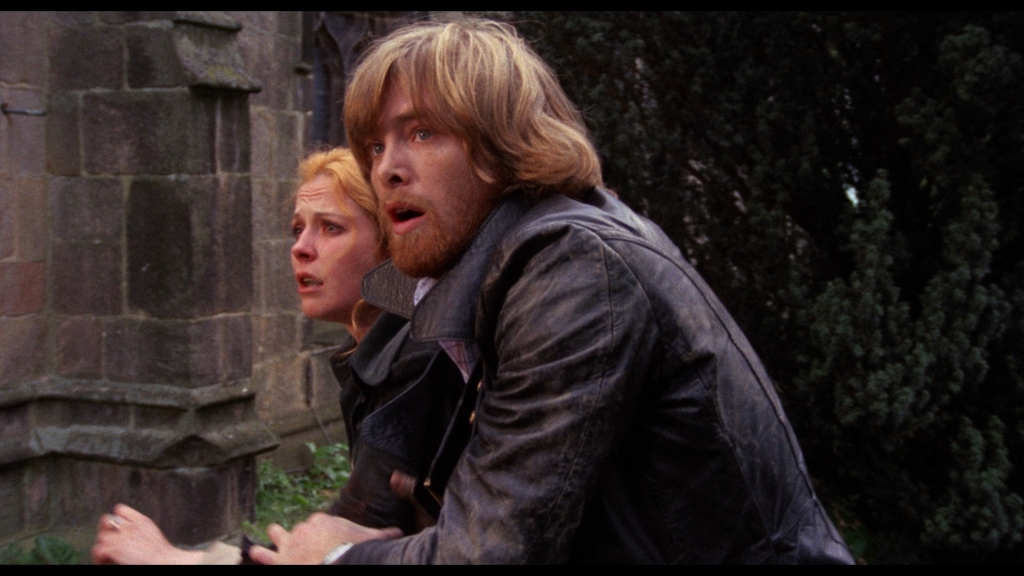 Antique shop owner George (Ray Lovelock), on his way to deliver pieces from this collection to another shop, meets Edna (Christine Galbo), who is on her way to meet her sister. Unbeknownst to the two, an agriculture company is experimenting on a new machine that will help eliminate destructive insects on farms.

In the small town of Southgate, George and Edna will collide with a hard-headed fascist police investigator (Arthur Kennedy), a corporation that does not care about the environmental effects of their new machine, and the flesh-eating living dead.

As noted in the commentary tracks and interviews on the disc, when The Living Dead At Manchester Morgue was made in 1973, producers were not yet churning out zombie movies, and the overall rules of zombies had not yet been established in movie fans’ collective consciousness.

Without the shackles of expectations, Grau was able to create something fresh, infusing his zombies with personality and adding a supernatural element to them such as the ability to raise the dead in a mockery of Christian ritual, and the undead not showing up in photos when they were clearly part of the photo.

Like Romero, Grau made sure that his zombie film carried a social message along with the horror.

The Living Dead At Manchester Morgue has a strong anti-corporation ecological horror message, along with a sly commentary on the large gap between far-right conservatives and leftist liberals, fear of the hippie generation in a post-Manson Family world, and Satanic Panic.

The opening scene — which received a brilliant homage by Edgar Wright in his horror-comedy Shaun of the Dead — shows the indifference of people in Manchester to what is happening around them from the mundane death of a small bird to the outrageousness of a nude protestor running down a busy Manchester street.

Much of what happens in the movie — the indifference, the outright denial of a catastrophe unfolding, the disregard for the health of the planet and its people by corporations — can easily be seen in 2022. 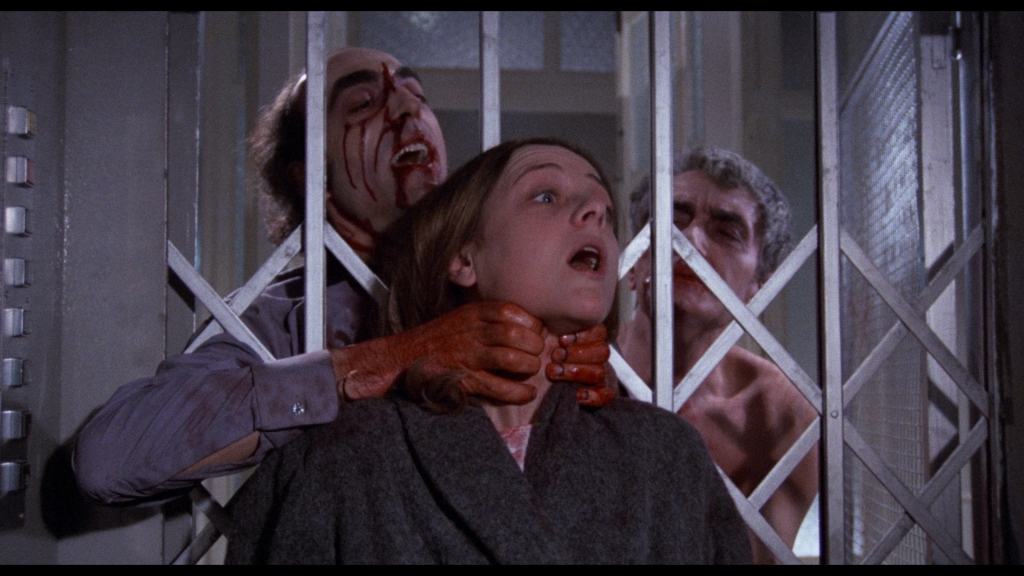 Synapse Films has done amazing work in restoring The Living Dead At Manchester Morgue, and presenting it with the best possible picture and sound.

The soundscape and score by composer Giuliano Sorgini are crisp and add to the atmosphere and horror in unexpected ways. The sonic pollution that causes the zombie uprising is ever-present, but not in a way that intrudes on the dialogue or natural sounds.

The look of the film is clear and sharp. The gore and blood look incredibly real, and there’s a particular scene where you can see the zombies surrounded by small flies and gnats as they eat one of their victims. It’s a small detail, but it adds to the feeling that these ghouls are rotted corpses attracting insects to their decrepit odor.

The disc includes a feature-length documentary about Jorge Grau, exclusive to the Blu-ray, that covers his life and films, as well as the making of the film.

The documentary contains quite a bit of footage and commentary from Grau, who passed away in 2018 at the age of 88.

Along with the documentary, the disc has two commentary tracks. 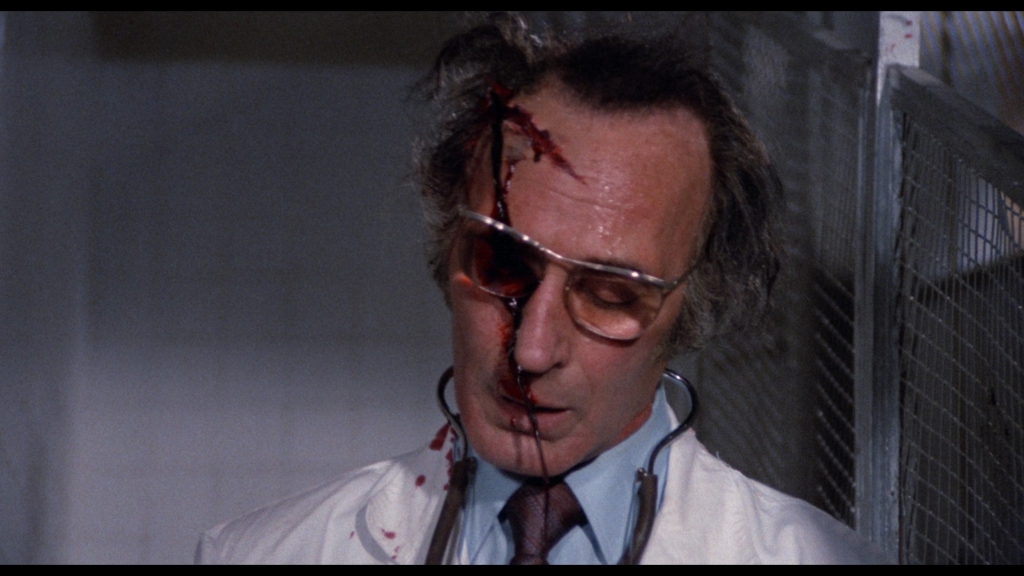 The commentary track with Troy Howarth is more of an academic look at Grau’s career and the making of The Living Dead At Manchester Morgue. Howarth’s enthusiasm about Grau and European cult cinema come through clearly on this track, and there is rarely any downtime or empty space during his talk.

The second commentary track is with Bruce Holecheck of Cinema Arcana and Nathaniel Thompson from Mondo Digital. While there is some overlap in information between their commentary and Howarth’s, they do cover much of Grau’s career and Euro cult movies in a conversational tone.

Both tracks are enjoyable to listen to and are worth the time for education on Grau and European cult movies of that time period.

Last, but certainly not least, the disc includes a short interview and a Q&A from the Festival of Fantastic Films with special effects and make-up artist Giannetti Derosi. Derosi goes deep into his vast career in the film industry and has some wonderful stories about working with Grau, and an amazing story about working with Sylvester Stallone on a Rambo movie.

Giannetti Derosi is the special effects and make-up lead for the movie. 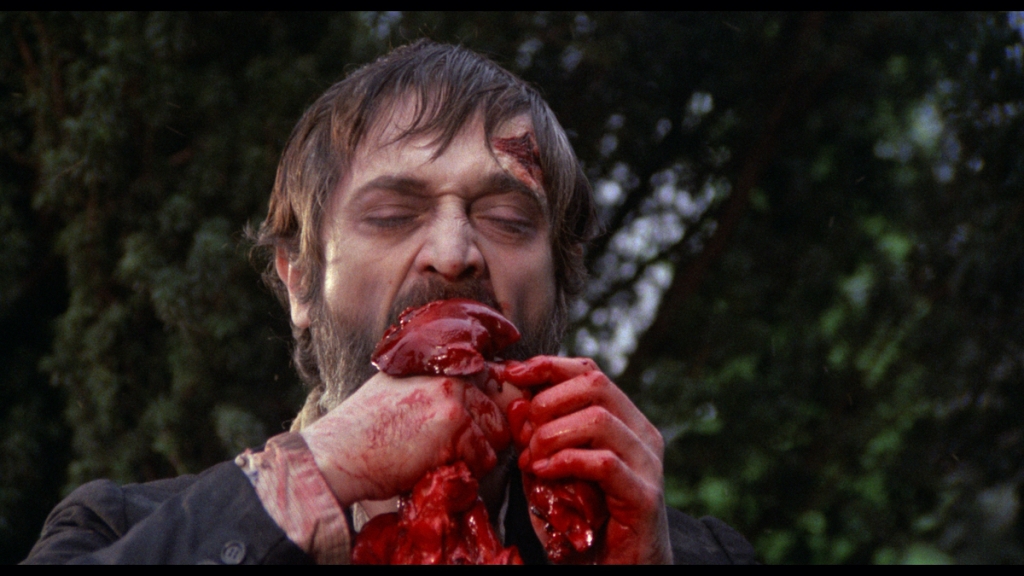 This is a movie that needs to be seen, and with the care that Synapse has put into this release, there is no longer a reason for fans to not see this amazing horror film.

Synapse Films also released a limited-edition steelbook 3-disc edition of The Living Dead At Manchester Morgue, and some are still available to purchase on their site.

Don’t miss out on this Synapse Films release of The Living Dead At Manchester Morgue, a film that ranks among the best horror ever made.