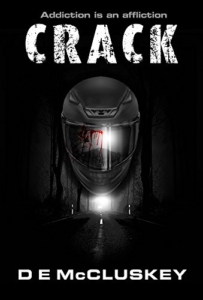 A psychological thriller, David McCluskey’s Crack tells the tragic and hyper-violent story of Joe O’Hara, a middle-aged night watchman at a construction site who experiences a horrific car accident. But the sight of the crash — described in the novel as a “gore fest” — is not all that soon drives Joe mad; it’s the terrible sound he hears when his vehicle strikes and crushes the life out of another person.

That sound, a sickening and audible crack, haunts Joe and the reader as the helpless protagonist tumbles headfirst into a nightmarish world of addiction, hallucination, and murder. For anyone who has ever experienced a car accident, or even witnessed one, the novel serves as a powerful and disturbing reminder of just how precarious our lives are as we attempt to navigate the road in our cars.

The relatability of Crack is further highlighted by the “everyman” protagonist, a man who holds no particular virtues or vices, and yet finds himself caught in a dreadful tailspin that begins with bizarre visions and rapidly escalates to violent acts in the real world. As he attempts to recover emotionally from his trauma, Joe begins seeing a dark figure that he comes to know as the Helmet Man — and this mocking, taunting specter forces Joe to feed his confusion and rage in twisted ways.

Joe’s world begins to crumble, and the violence that ensues is intense and visceral as the author vividly describes one excruciating act after another. The bloodshed and murders are a highlight of the novel, especially for fans of B-horror movies and exploitation cinema. When the author describes Joe’s car accident as a “gore fest,” he could very well have been describing the later exploits of Joe himself. 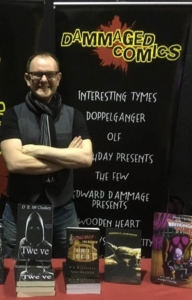 Other characters populate Crack — Joe’s wife and children, the family dog, and a law enforcement duo who will eventually confront Joe and his actions — but none of them is nearly as interesting or captivating as the protagonist or the Helmet Man. Ian and Paula, one an officer and the other a detective, are also engaged, which apparently means that most of their dialogue with one another should consist of incessant flirting and sexual innuendo (even while they investigate cases and discuss dead bodies).

And it is here that cracks begin to appear in McCluskey’s writing and character development. The dialogue is often wooden or unrealistic, while the number of punctuation errors, grammatical mistakes, and wordy sentences grows with each passing page.

Another distraction is the word “crack” itself — rather than describing the sound with disturbing aural cues or some other kind of engaging imagery, the author chooses to insert the word CRACK!!! incessantly in the text. Near the end of the novel, as the police employ an undercover detective to catch a sadistic killer, this stylistic choice becomes a major distraction.

Visually, the novel offers several memorable scenes: a tidal wave of blood soaking a windscreen, a severed head clad in a motorcycle helmet, a bone-crushing blow with a crowbar — these are just some of the images that will linger with readers as they follow Joe along his blood-soaked journey.

Also, the overall premise of Crack is strong and deeply psychological.

The inner voice that roars inside Joe’s head pretends to offer assistance, when in reality the voice is leading Joe to the brink of total despair and nihilism. But before readers can be impacted by the protagonist’s psychotic break, the author needs to hone his grammar and editing skills. Only then will the novel’s many strengths truly stand out.