Featuring a diverse group of characters and a Lovecraftian villain, Craig Stewart’s Worship Me takes religious horror in a monstrous new direction. 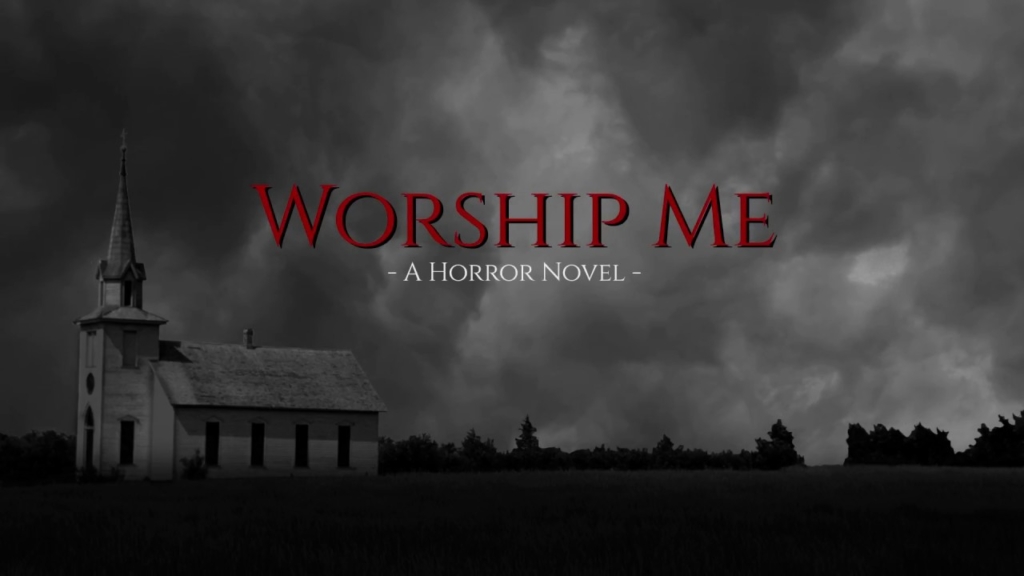 The primary setting of Craig Stewart’s Worship Me — a simple church on a Sunday like any other — ultimately becomes a place of sorrow, tragedy, regret, and hideous transformation.

The novel deftly weaves the stories of several individual characters, but its main focus is on the kindhearted Clara and her friend Angela. Angela’s husband, Rick, has been missing for three months, having driven off in his car one night never to come back. But as Clara begins preparing the church for Sunday services, and as a range of men, women, and children begin to arrive at the house of worship, the reader gets the distinct impression that Rick will be making his triumphant return on this fateful day — and that it won’t be pretty.

No one is safe in Stewart’s novel, not even the protagonist and her courageous friends. 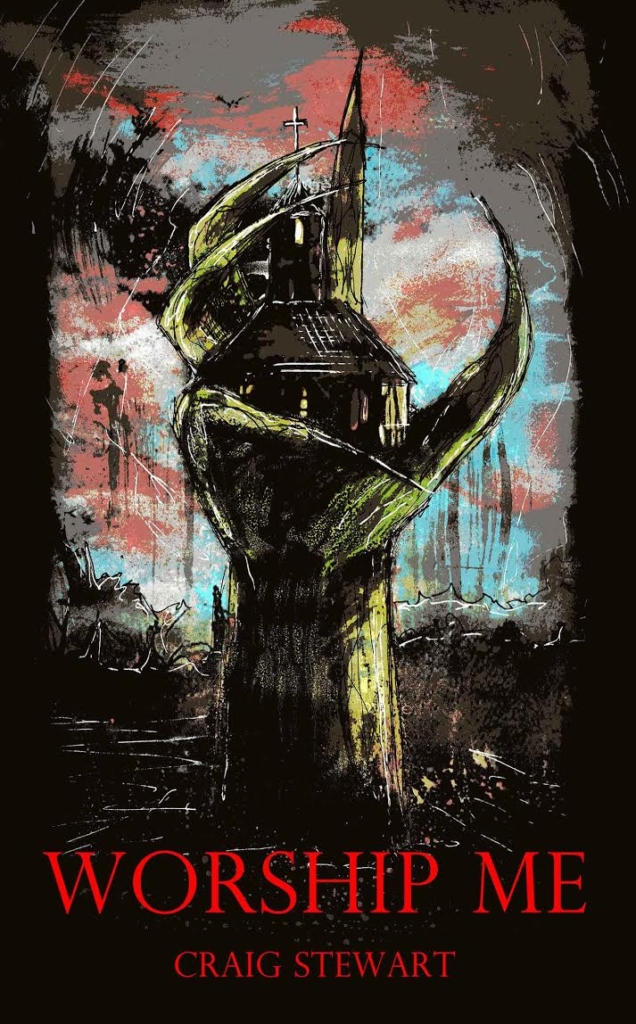 Sure enough, Rick does return — only he’s not the same man that he was before. Emerging from the depths of a black forest and dressed in a filthy cloak, Rick joins the rest of the shocked parishioners. Some of them believe that Rick’s safe return must be the work of God, that all their prayers for Rick’s well-being have been answered; meanwhile, other characters, including Angela, sense that something is seriously wrong.

It is here that Angela admits to Clara that Rick abused her violently, and that she is less than enthusiastic about rushing back into his open arms. Clara remains determined to keep Angela safe, and that’s when the novel takes its horrific and supernatural turn.

Battered and scarred, Rick has had a strange kind of rebirth after his experience in the woods. He tells one of the parishioners that he has not only returned for Angela, but for the entire congregation, and that they must now do his evil bidding. As blackened clouds fall outside, the motley group finds themselves trapped inside the church, with Rick as their new and self-appointed leader. And if Clara, Angela, and the others refuse to do what he says, they will die, savagely and without remorse. 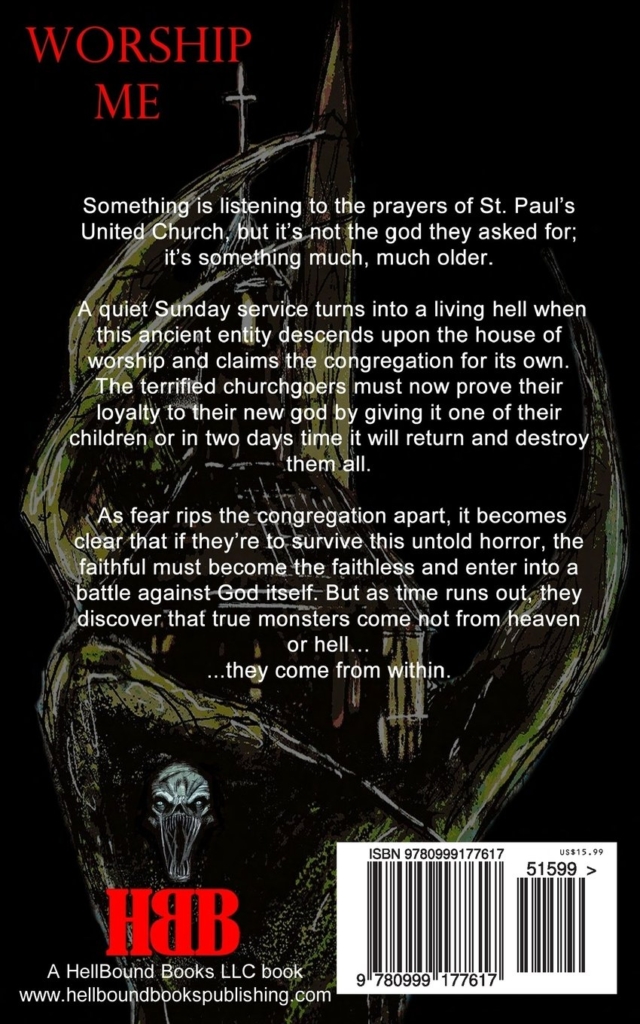 The bloodshed in Worship Me is intense.

The author handles the scenes of violence and slaughter well, never resorting to juvenile language or turns of phrase. This is a thoughtful and mature horror novel, and for fans of religious horror in particular, there is much to enjoy. Stewart depicts the claustrophobia of the church setting in a realistic and foreboding way, and the large cast of characters bursts from the page with their own quirks and mannerisms.

The story enters Lovecraftian territory with the arrival of a beast known as the Behemoth, and in doing so bypasses the realism that the author had established prior. Stewart’s human characters are far more engaging than his monster, but the creature is still horrifically drawn, massive and yet scarecrow-like, with fingers like needles and an insatiable appetite to destroy.

The novel moves at a steady pace from this point forward, reaching an appropriate conclusion while leaving the reader to interpret what might happen next and how the bloody saga might continue. 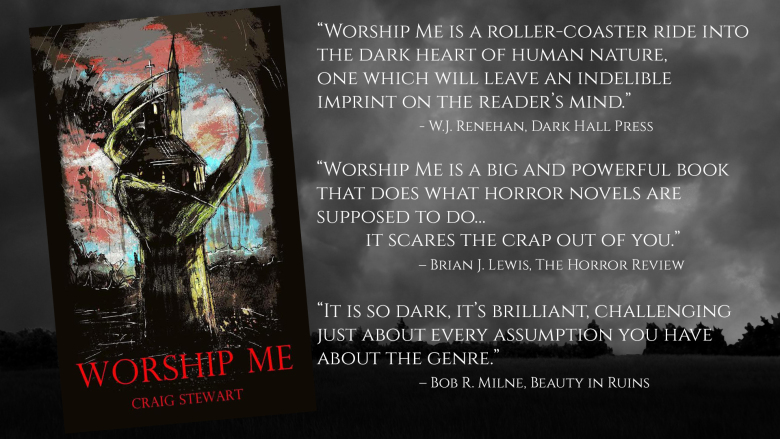 Vividly described and well-written, Craig Stewart’s Worship Me will appeal to a broad range of readers.

While some might be put off by the many characters who spout scripture at any given moment, the horror elements of the book are rich, gruesome, and detailed. And fortunately, the conclusion keeps the dark tale open to future carnage…

Released by Hellbound Books Publishing, Craig Stewart’s Worship Me is available now in both paperback and electronic versions.